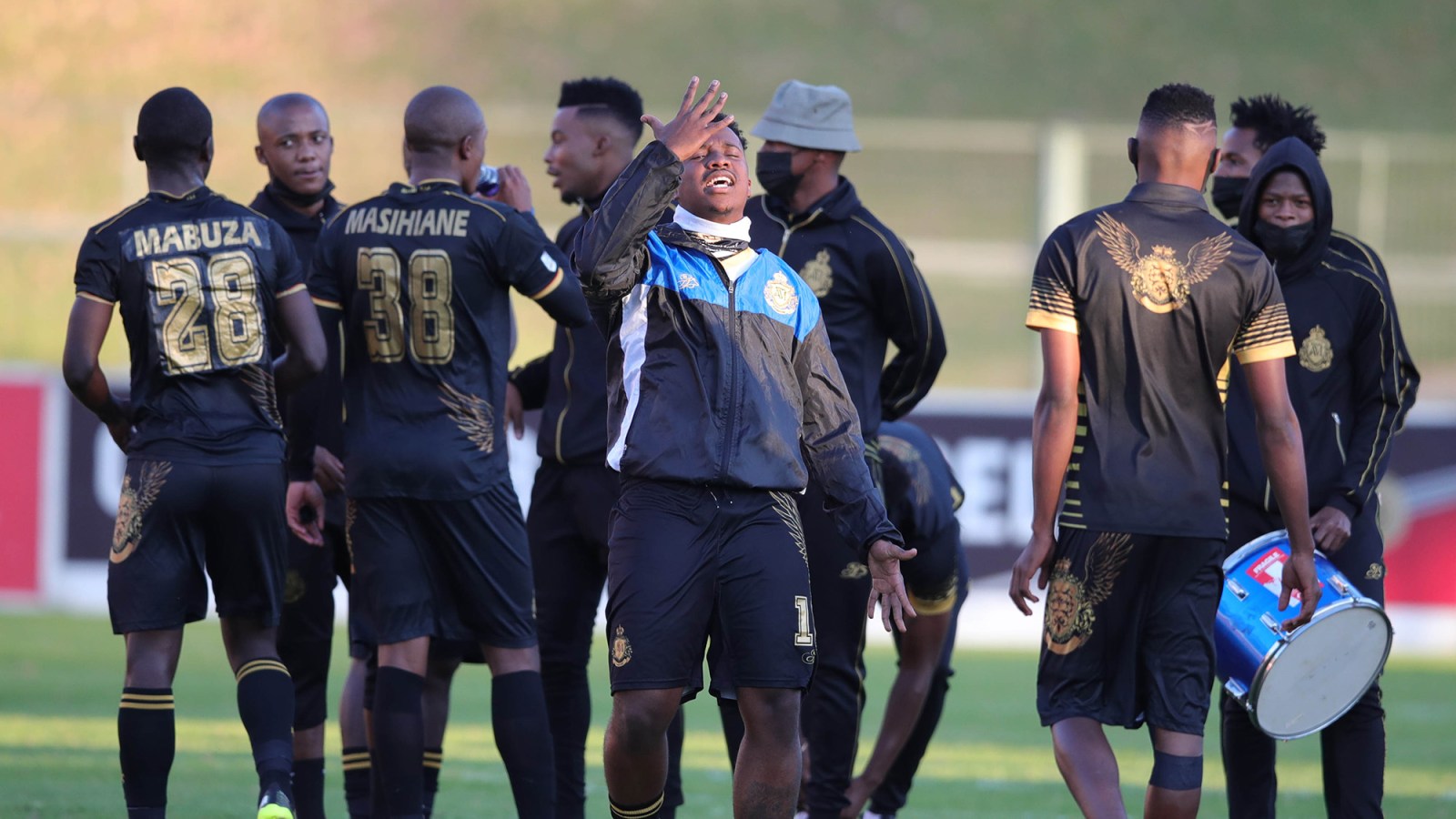 Andile Mpisane, chairperson of Royal AM, celebrates after their GladAfrica Championship 2020/21 victory over thr University of Pretoria at Tuks Stadium on 16 May 2021. (Photo: Samuel Shivambu / BackpagePix)

The PSL season is weeks away, but the saga between the league and Royal AM still hovers.

The Premier Soccer League (PSL) disciplinary hearing verdict, which involves KwaZulu-Natal side Royal AM for their four no-shows during the promotion/relegation playoffs, is set to be handed down on 11 August.

The GladAfrica Championship side, which has not given up on its attempt to be declared 2020/21 GladAfrica champions as opposed to Sekhukhune United, was cited for misconduct by the league after they boycotted the playoffs in June 2021.

The hearing in front of the league’s disciplinary committee (DC) was twice postponed at the request of Royal’s legal representatives, PSL prosecutor Nande Becker told DM168.

“The hearings had to be postponed on 17 July because Royal AM tried to bring an application for a postponement without filing supporting documents and affidavits,” Becker said by text message.

“The application was brought for a second time on 24 July, supported by affidavits. The DC refused this application. Royal AM’s representative immediately brought a new application for a postponement on the basis that the club’s president [Shauwn Mkhize] had taken ill after a Covid-19 [vaccine] shot.

“Both parties closed their cases on 31 July. The DC ordered the parties to file heads of argument by 5pm today [4 August]. They will hand down their decision on 11 August and, if the club is found guilty, will hear arguments then on appropriate sanctions.”

The DC ruling will be yet another twist in the ongoing saga.

On 26 July, Royal were dealt another blow when the Johannesburg High Court Judge Leonie Windell dismissed their attempt to have acting PSL chief executive Mato Madlala charged for contempt of court after the PSL proceeded with the playoffs in June – which Royal did not honour.

Royal were granted an interdict, which temporarily halted the playoffs, pending their leave to appeal the ruling by Judge Roland Sutherland of the Johannesburg High Court. Sutherland had upheld the arbitration decision by independent arbitrator Hilton Epstein SC, which handed Sekhukhune all three points as Polokwane were found guilty of misconduct.

Rise and Shine were punished for failing to field the prescribed number of under-23 players – as stipulated by PSL rules – in a match against Sekhukhune in January 2021. The three points saw Sekhukhune replace Royal at the summit.

Sutherland’s decision to uphold Epstein’s ruling effectively rubber-stamped Sekhukhune as the champions of the second tier of South African football.

Sutherland further dismissed Royal’s appeal of his ruling, and thus the interim interdict handed by Judge Justice Nyathi halting the playoffs fell away. The PSL then set up the playoffs, which included Royal, Premiership side Chippa United, as well as Richards Bay, who finished third in the Championship.

Royal were a no-show for all their fixtures and Chippa retained their top-flight status. The aftermath of the playoffs saw Royal take Madlala to court on the basis that she and the league had acted against the Nyathi ruling.

Windell, in a 49-page judgment, dissected and dismissed Royal’s assertions.

“The relief Royal AM seeks runs contrary to the previous findings of this court and is not supported by the facts or the law. The interdictory relief granted by Nyathi AJ came to an end when Sutherland DJP refused leave to appeal on 18 June 2021.

“Paragraph two of the order of Nyathi AJ did not have the effect of reinstating Royal AM to the top of the GladAfrica Championship and has been suspended by the NSL’s [National Soccer League’s] application for leave to appeal,” read Windell’s ruling.

“The Epstein award is binding and Royal AM’s application for leave against the dismissal of the review did not have the effect of suspending the Epstein award.”

Windell said Royal’s viewpoint that the interdict would be in place until the whole saga had been resolved did not make sense.

“The relief proposed by Royal AM in the current application essentially seeks to reinterpret Nyathi AJ’s order as a much bolder, braver move, designed to operate for a much longer period, until every conceivable application for leave to appeal to every higher court was exhausted and until any appeal was finalised,” said Windell.

“Royal AM, by exhausting all applications for leave to appeal to all possible higher courts, or any appeals, would obviously take a considerable amount of time. This relief would prevent the finalisation of the 2020/2021 football season, which would in turn mean that the 2021/2022 season could not start.

“Nyathi AJ clearly did not intend any outcome of this kind, which would have far- reaching consequences for all professional football teams in the DSTV Premiership and GladAfrica Championship.”

Despite Royal’s hopes of automatic promotion to the Premiership being effectively ended by that Windell judgment, the club’s hierarchy has refused to give up the fight.

Soon after the Windell ruling, the club’s legal representative, Mabuza Attorneys, made clear their intentions to go as far as the Constitutional Court in their fight for automatic promotion.

“In the circumstances, it should be self-evident that the NSL is not entitled to conduct itself as if the above-mentioned judgment is the final word and thereby violate or undermine Royal AM constitutional rights, including its right to appeal or to have a dispute finally resolved by courts,” the lawyers said in a letter to the league.

“There are other compelling reasons the appeal should be heard, more particularly in that there are conflicting decisions in the various divisions and certainty is required,” they added in court papers laying out the club’s future plans.

“The further compelling reasons this matter ought to be heard by an appellate court is that there are broader constitutional issues at play… The issue of aggravated and continuing contempt of court is in itself a self-standing compelling ground for the hearing of the appeal on an urgent basis.”

The side has continuously maintained the belief that they are being unfairly punished for Polokwane’s transgression.

Meanwhile, the league is not looking back and has since released fixtures for the new season, with Sekhukhune appearing in the top flight, and Royal still to play in the second tier. DM168