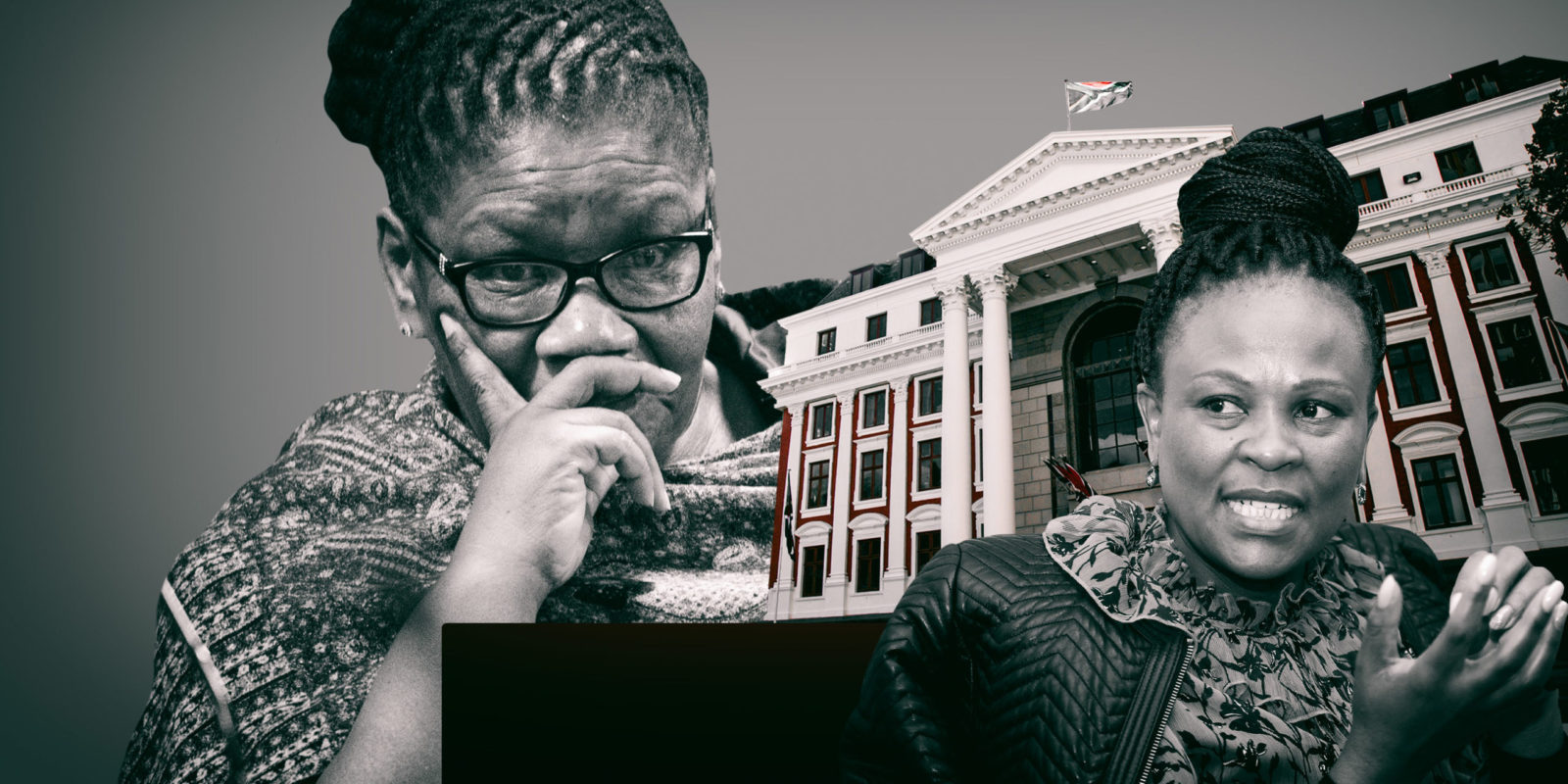 Parliament’s Section 194 inquiry into the fitness for office of Public Protector Busisiwe Mkhwebane is in limbo — until 13 August, when the rules committee must chart a way forward, the National Assembly programming committee heard on Thursday.

“The final word will come from discussions at the rules committee,” was how Deputy Speaker Lechesa Tsenoli wrapped what looked like becoming a heated political debate after the EFF repeatedly asked about the status of that inquiry.

The EFF had opposed the establishment of the inquiry into Public Protector Busisiwe Mkhwebane’s removal from office on grounds of incompetence and misconduct that the House had approved in mid-March 2021. The party’s hand seems strengthened by the end of a July Western Cape high court judgment that, in an unprecedented manner, rewrote the rules of the national legislature.

Thursday’s parliamentary programming committee was told the Section 194 inquiry committee meant to sit again on Tuesday — its draft programme that has scheduled presenting its report Mkhwebane’s fitness for office in January 2022 — but it did not meet because of the Western Cape high court judgement.

And it’s unlikely to meet until clarity is reached on what Parliament’s next steps are.

The National Assembly must decide whether to appeal the judgment, whether to restart the process with a newly established independent panel to review the complaint to see if there was a case to answer to MPs, or whether to proceed.

Over the past week, legal advice was sought and a series of meetings unfolded.

The decision to refer the matter to the rules committee is important as it was this committee that drafted, processed and adopted the Section 194 rule — officially adopted by the House in earlier December 2019, with the EFF abstaining.

The 29 July Western Cape high court judgment, in an unprecedented move, rewrote parliamentary rules to allow active participation in oversight and accountability proceedings before MPs and — crucially — remove the possibility of a judge being part of an initial independent assessment of whether there actually was a case to answer before lawmakers take on the inquiry.

It was that last rule rewrite that effectively opened the door to the current stalling. Retired Constitutional Court judge Bess Nkabinde chaired the three-strong independent panel that in a report publicly released on 1 March 2021 recommended the National Assembly could proceed with an impeachment inquiry on grounds of incompetence and misconduct.

“I do not suggest that it is time for judicial officers to retire to ivory towers. I do, however, suggest that the judiciary would be well advised to steer clear of a process so politically charged in which its involvement adds no value other than expediency,” wrote Judge Elizabeth Baartman in the full Bench judgement before rewriting the parliamentary rules.

With this court ruling, Mkhwebane was quick to call on the national legislature to immediately stop the inquiry.

“The National Assembly should take the opportunity to rectify other weaknesses identified and criticised by the court, including those which may not necessarily have been declared unconstitutional at this stage. Any rushed process can only result in another wasteful, flawed and illegal outcome,” Mkhwebane said in a statement.

Parliament’s rules committee on Friday 13 August will have its discussion, and decide on a way forward.

But in Thursday’s programming committee the way forward on how Parliament deals with the July violence and public disorder in KwaZulu-Natal and in parts of Gauteng took a decidedly different turn.

Pencilled into 25 August is a joint debate, the day after the two Houses adopt their respective committee’s reports on oversight visits to the two hard-hit areas.

Several political parties raised concerns that this may be rushed; Parliament only returns from constituency recess on 18 August.

Pointing out that joint sittings usually ended up a talk shop, IFP Chief Whip Narend Singh instead asked for a proper and full committee interrogation of ministers, particularly of the security cluster. “Parliament through its committees must fully interrogate all the members of the executive, and whoever else, to find out exactly what happened. Why? Who did what? Who did not? Etcetera.”

And what happened to that inquiry House Chairperson for Committees Cedric Frolick had talked about some 10 days ago, came the question from EFF MP Hlengiwe Mkhaliphi in what seemed to hit a raw nerve.

Last week the police and Joint Standing Committee on Defence had decided against a joint inquiry and, invoking Rule 227, referred the matter back to Speaker Thandi Modise.

Frolick’s response was that that meeting decided against a joint inquiry, something no one had asked it to do and that it can’t do anyway in terms of the rules — he’s still awaiting a response from the chairpersons. Nothing stopped any committee from holding an inquiry. Rule 167 allows a committee to summons anyone to appear before it, and to provide any documentation. And that’s what committees must do.

“There was no oversight work done in KwaZulu-Natal. That committee abandoned their programme and sat in a five-and-a-half-hour meeting in KwaZulu-Natal,” said Frolick of the police and defence committees’ provincial visits.

In Gauteng, even though the lawmakers were accompanied by a senior SAPS delegation, more questions than answers remained despite “very worrisome issues that came to the fore,” added Frolick. “That’s why a parliamentary inquiry is necessary, specifically around the SAPS.”

Even while still on recess, the pressure is ratcheting up for Parliament. Not least of which is urgent legislation, like amendments to the electoral laws so independent candidates can stand in provincial and national elections.

The clock is ticking on the June 2022 deadline the Constitutional Court has given Parliament to fix the law. Yet on 24 August Home Affairs is pencilled in to give an update on the ministerial task team looking at this matter.

But that task team merely informs policy, which in turn underlies legislation. It remained unclear on Thursday whether Home Affairs had drafted a Bill, and whether the ministry was in a position to table such a draft law.

With legislation on average taking two years to go from start to final adoption, right now it seems impossible to meet the Constitutional Court deadline just 10 months away.

And so an electoral mishap at national and provincial level may be in the making, even as the focus right now is on the Electoral Commission’s Constitutional Court application to postpone the 2021 local government poll, as the Covid-19 pandemic and lockdown would not allow free and fair elections. DM