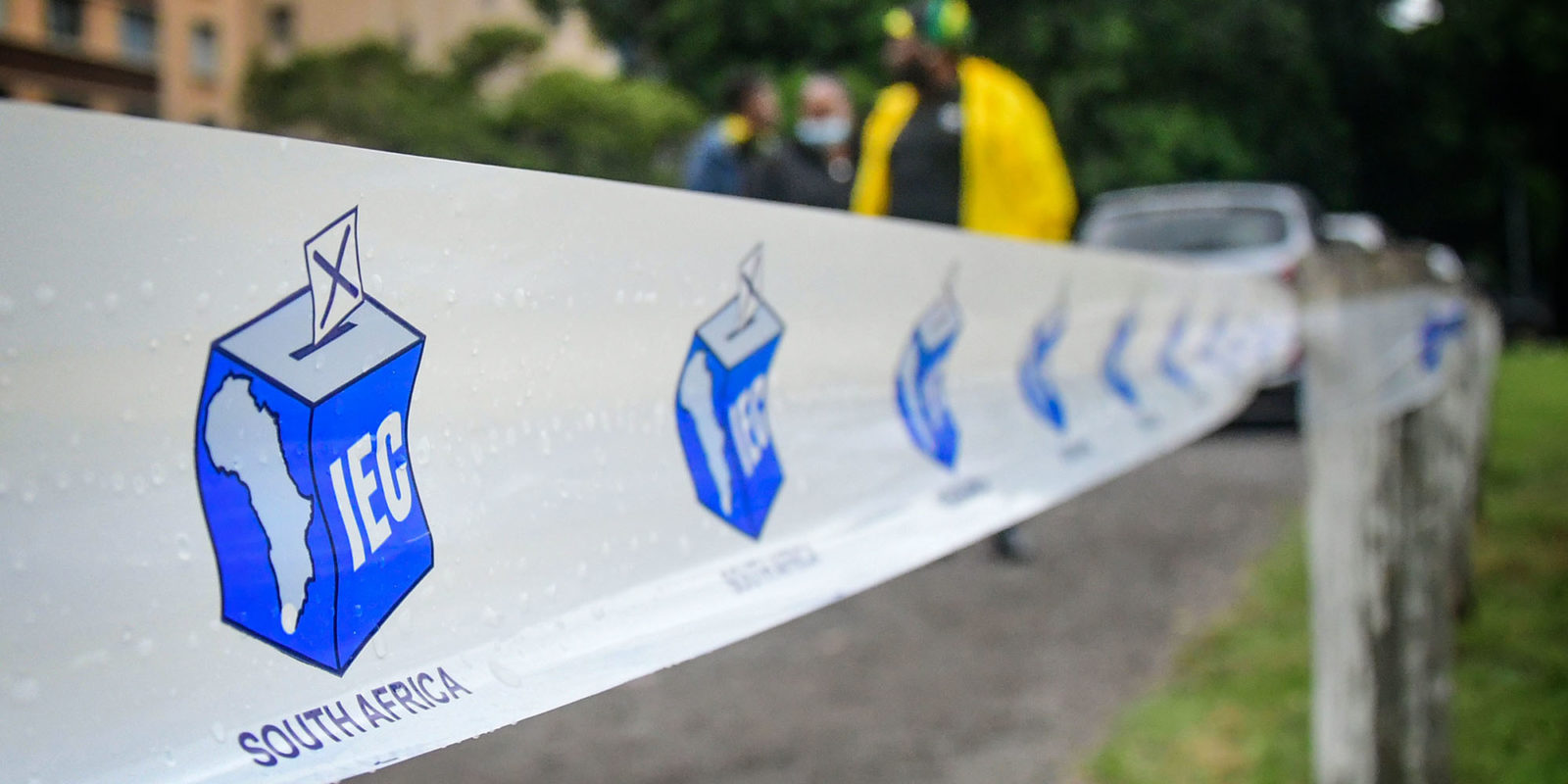 Cooperative Governance Minister Nkosazana Dlamini Zuma on Tuesday announced she had to proclaim 27 October as the 2021 municipal poll date, but only so the Electoral Commission could approach the courts for a postponement. It’s an interesting legalistic take on a political — and constitutional — pickle.

The basic argument is that without having formally proclaimed and gazetted 27 October 2021 as the local government election date, the Electoral Commission of South Africa (IEC) could not approach the Constitutional Court to request a postponement.

Up until now, the municipal poll date was merely announced — which is what President Cyril Ramaphosa did on 21 April 2021.

“The minister (of Cooperative Governance) is not empowered to postpone the elections to a date beyond 90 days after the expiry of the term of the municipal councils…” said Cooperative Governance Minister Nkosazana Dlamini Zuma in her statement on Tuesday on the prescribed window for new elections, which in 2021 ran from early August to 1 November.

That was the outcome of the legal opinion Dlamini Zuma said she sought and why on Tuesday, the minister announced 27 October was proclaimed and gazetted as the 2021 local government election date.

But the legalese hides the political, constitutional and governance dynamics that would have unfolded behind the scenes.

The governing ANC at Luthuli House was kept briefed and abreast of matters. On Monday, the proclamation and legal reasons were discussed, and endorsed, at the ANC National Working Committee (NWC), it is understood.

Shortly after the ministerial statement, the ANC welcomed Dlamini Zuma’s announcement proclaiming the municipal poll date as “an important and critical legal requirement”, paving the way for the IEC to approach the courts.

Conversations also happened between Dlamini Zuma and the Electoral Commission.

Whether the IEC was pertinently asked to delay its approach to the Constitutional Court to request a poll postponement or whether the electoral body was simply too slow to get its legal papers in order remains to emerge fully. A hint lies in the phrasing in the IEC’s response that Dlamini Zuma’s announcement “follows a legally sanctioned consultation process between the commission and the minister”.

While South Africa would not be alone in the world in postponing an election due to the Covid-19 pandemic, such a delay of the municipal poll was widely, but not exclusively seen as option B.

That the IEC would go to court for a postponement emerged late in July after it adopted the finding and recommendations of retired Constitutional Court Deputy Chief Justice Dikgang Moseneke that, given the Covid-19 pandemic, surges and slow vaccine roll-out, a free and fair poll in October would not be possible.

A constitutional amendment would not only be lengthy, but was also regarded as unsuitable because the exceptional circumstances the Covid-19 pandemic has triggered are deemed once-off.

All this is uncharted terrain. Over the past 27 years, running successful elections with results that all political parties accepted was a feather in South Africa’s democratic cap.

Fast-forward to 2021, and the government and the governing ANC is under pressure after almost 18 months, and continuing, Covid-19 lockdown restrictions. Factors include the delayed vaccination roll-out, corruption involving the politically connected in personal protective equipment and Covid-19 communications, and increasing service delivery paralysis.

An estimated 1.2-million jobs of the more than two million lost due to the Covid-19 lockdown have not been regained. The National Income Dynamics Study — Coronavirus Rapid Mobile Survey (NIDS-CRAM), a collaboration of researchers across several universities, has documented greater levels of poverty and hunger.

While the July violence and public disorder have shaken the Cabinet to its core, the government’s security response includes police seizing reportedly looted goods, including food, in unconstitutional warrantless searches.

It would therefore not be surprising that Dlamini Zuma may well have sought legal advice to shore up the government’s standing — and to stave off any criticism of electoral interference.

That would be a blow to the Ramaphosa presidency, given the centrality of elections to underscore how South Africa’s democracy is intact.

The legal advice said because no court order exists to postpone the municipal poll, the minister must proclaim the date. If the Constitutional Court then postpones the elections the minister is not in contempt because she had simply exercised her legal and constitutional responsibilities in proclaiming an election date in the absence of any other ruling, according to Tuesday’s ministerial statement.

Whatever happens, Dlamini Zuma is covered. On Tuesday, she indicated she’d abide by the court’s findings, although the ANC said in its statement that it would file court papers to support the IEC application for a delay of the local government elections.

Crucially, that IEC court action must also deal with the voters’ roll, which was closed once the election date was proclaimed. The now closed voters’ roll means no new voters can be registered.

It’s a blow for the commission that has made much of actively boosting the voters’ roll to just over 26.7-million South Africans in 2019. That fewer numbers of people relative to the numbers of registered voters actually cast their ballots on election day, as the stats show, has perhaps more to do with the offering from political parties.

Reopening the voters’ roll as part of a successful postponement application may be tricky. It’s a headache Dlamini Zuma’s election date proclamation caused the IEC.

It’s expected the commission will deal, at least initially, with this at its briefing on Wednesday, alongside giving an indication on how far along its court application is.

But the reality is also this — should the Constitutional Court decline a postponement, there’s a date for the local government elections.

That’s what the opposition DA, which had argued for the elections to be held in October 2021 before the Moseneke inquiry, is holding on to.

The Constitutional Court was no rubber stamp, and, “because it is bad for the Constitution to tinker with election timelines, but also because communities should be given the chance to vote for change”, the local government elections should happen on 27 October, said DA MP and Cogta spokesperson Cilliers Brink on Tuesday.

IFP Chief Whip Narend Singh called on the IEC to immediately, and urgently, approach the courts.

“The IFP believes all necessary steps must be taken to ensure a free and fair election, as well as the continued health and wellbeing of all South Africans.”

In a three-and-a-half line, one paragraph notice in Government Gazette 44935 published late on Tuesday evening, Dlamini Zuma said “I… hereby call an election of all municipal councils and set 27 October 2021 as the date for such an election”.

That in many ways was the easy bit. Now the IEC must get on with the difficult things, like persuading the Constitutional Court it has a good case for the 2021 municipal poll postponement. DM