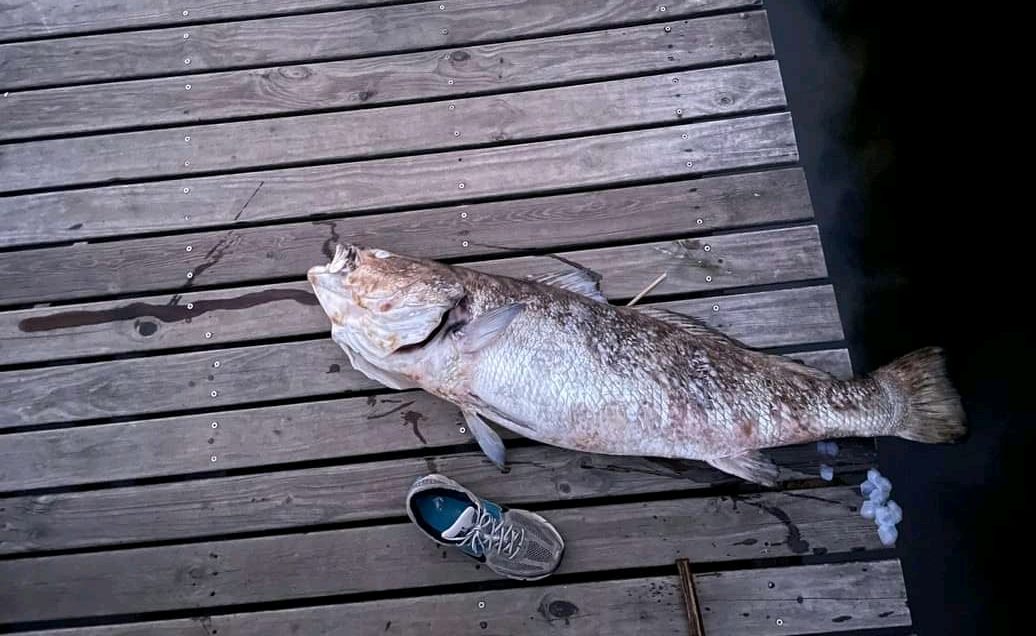 The kob found dead in the Touw River in Wilderness on Sunday by Eska Claasen. (Photo: Supplied)

For the past three weeks, residents of Wilderness in the Western Cape have noticed an increasing number of fish dying in the Touw River. What’s causing them to die is not yet known.

Melody van Aardt, a Wilderness resident who has been living along the Touw River for 20 years, said the dead fish they have seen are covered in fungal lesions.

“The fish are dying, from the smallest to the largest, and are suffering slow deaths,” she said.

SANParks was alerted to the die-off and took water samples. This has brought it no closer to understanding what’s causing the deaths.

SANParks spokesperson Reynold Thakhuli said the water quality results are all within normal parameters for the estuary. No ammonia nitrogen, typically found in detergents and an indicator of sewage, was detected, nor were orthophosphates, an indicator of fertilisers.

“Eighty percent of the dead fish collected have been spotted grunter. The die-off seems very localised between Freesia Rocks and the lagoon mouth. If there were water quality issues, a far greater number of fish and a wider range of species would have died upstream and along the entire course of the estuary. However, a more intensive water and environmental analysis is being conducted as part of the broader investigation,” Thakhuli said.

He said no dead fish had been seen upstream at Ebb and Flow, Island Lake, Langvlei or Rondevlei. The latter three locations are connected to the Touw River and collectively form the Wilderness Lakes.

Van Aardt said residents did not believe the die-off was from natural causes.

“We are more concerned about the overdevelopment of the area causing the river to change permanently. For the Wilderness area, water is taken from the Touw River and the Kaaimans River. A river gets fresh water from the mountain catchment surrounding it… unfortunately, Wilderness and Hoekwil are tapped into the Touw River and water consumption is growing in this area,” she said.

She said the spotted grunter could be the first species to suffer from the river’s problems, but that other species were starting to suffer too.

“We have seen springers and mullets. Today (Thursday) we found a springer with black fungus on its fins and gills. This fungus is eating the fins and gills until the fish dies,” she said.

Another resident posted a picture of a dead kob in Touw River.

Thakhuli said similar short-lived mortality events occurred in the Touw River in the winters of 2019 and 2020.

“Spotted grunter was also the dominant species. We have observed lesions and growths on the dead fish collected and we are currently investigating these to try to make a definitive diagnosis to see if there is a direct cause for the deaths, or if there is a secondary stress that subsequently results in a secondary infection.

“Rangers patrol on a regular basis, collect dead fish and record information on the species and numbers, and samples are kept for analysis,” Thakhuli said.

He said SANParks is investigating, with aquatic scientists, veterinary scientists, local academics and the department of forestry, fisheries and environment’s marine specialists.

“We are working together to better understand the cause of the deaths. Making a diagnosis is not always simple or obvious as disease, and death is part of life in the ecology of the Touw River estuary,” said Thakhuli.

He said residents and fishermen were advised not to collect or eat any of the dead fish.

“During this event, fishermen are advised to practice catch and release and avoid eating fish that display any unusual-looking lesions,” he said. DM/OBP

World Cleanup Day: South Africans urged to come out on Saturday and contribute to a litter-free country