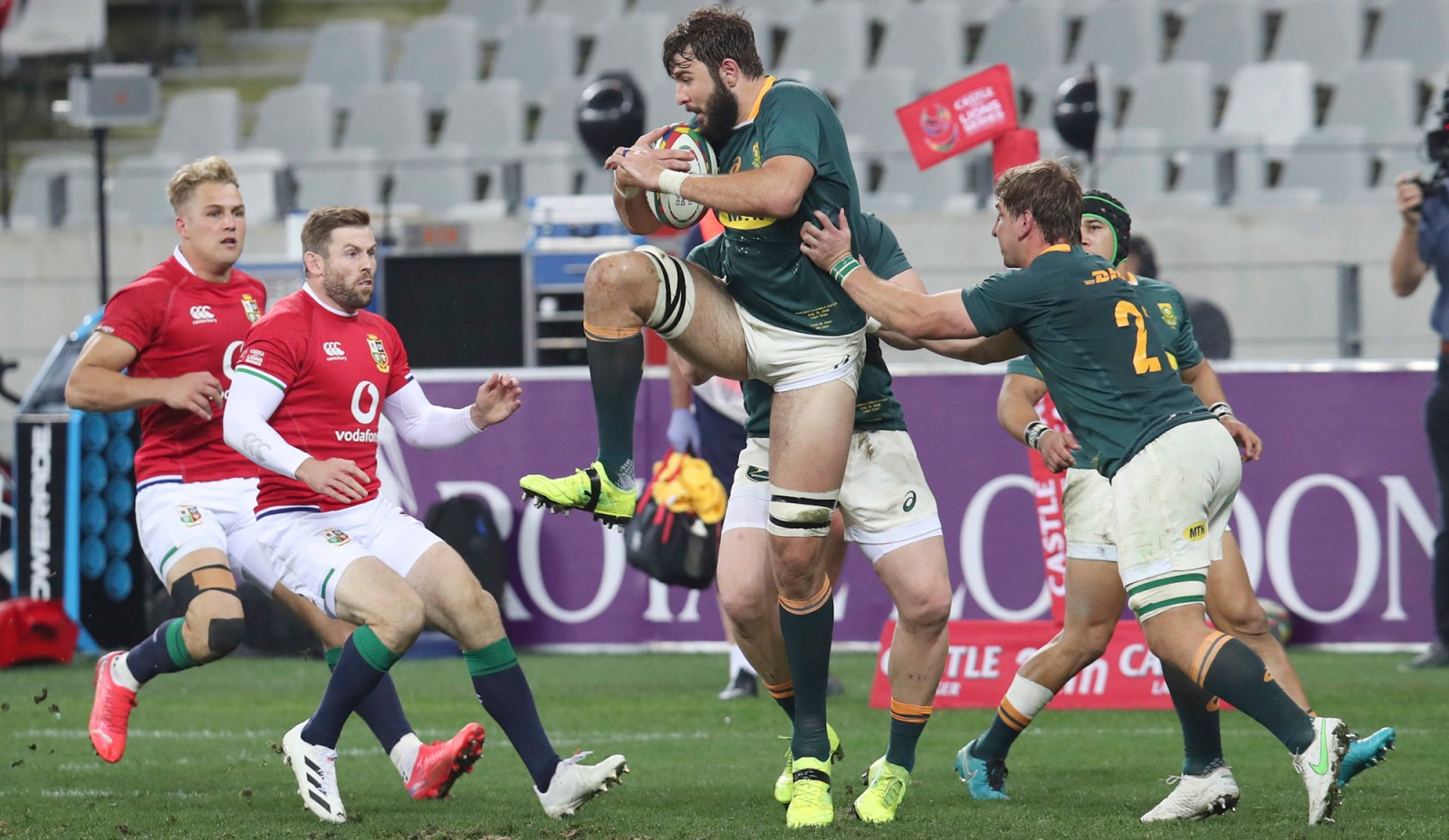 Lood de Jager of South Africa during the second Test of the 2021 British & Irish Lions tour between South Africa and the Lions at Cape Town Stadium on 31 July 2021. (Photo: BackpagePix)

The most ill-tempered Lions tour … well, probably since the last one… comes to a crescendo on Saturday and both Springbok coach Jacques Nienaber and Warren Gatland showed their final team selection hands.

The Springboks have made two enforced changes to their starting lineup for the winner-takes-all third Test of this fractious series against the British & Irish Lions while the tourists have made six tactical switches.

It’s a clear indication that the Boks are settled and only altering because they’re forced to while the Lions are still searching for a formula to win the series.

Bok coach Jacques Nienaber was upbeat despite knowing that two of his brightest stars, flank Pieter-Steph du Toit and scrumhalf Faf de Klerk will miss a game almost as big as a World Cup final.

That means a change to the bench with De Jager’s elevation to the starting lineup and instead of going for a 6/2 split between backs and forwards they’ve opted for a 5/3 formation.

Flyhalf Morne Steyn comes on to the bench for a remarkable opportunity to play against the Lions 12 years after he landed the winning kick of the 2009 series. Could he do the same again? Nienaber is hoping it won’t come down to a last kick of the game to win the series, but after everything that’s gone on over the past six weeks just to get this tour here, nothing would come as a surprise any more.

Reinach was elevated over Herschel Jantjies, who retains his place on the bench, in what Nienaber described as a “like-for-like” replacement of De Klerk. Reinach also spent three seasons with Northampton Saints and knows many of the Lions players’ styles well.

He is now at Montpellier with Bok flyhalf Handre Pollard, which will be an extension of that blossoming partnership continuing with the Boks.

“It is good that we know a lot of the Lions players, as you can see in our squad we have a lot of guys who play in the UK,” Reinach said. “It is the team working together (to share knowledge), me giving a few tips on Lions players Dan (Biggar) and (Courtney) Lawes. But we do enough homework that we are ready for anything.

“We (he and Pollard) spent the whole year having breakfast together every morning, so the understanding is quite good. But the way we train here, you can find your combination and relationship easily,” Reinach said.

“We (the Boks) have been together for seven weeks, and it is only us, this little family all together, that wants to go out there and put up a performance that makes the country proud.”

Both Du Toit and De Klerk’s long-term injury concerns remain vague. De Klerk, who limped off the field midway through the second half of the second Test, has a “soft tissue” injury that could keep him out of action for “five to six weeks” according to Nienaber.

Du Toit suffered what looked like a serious shoulder injury early in last week’s game and will have more scans before a full diagnosis can be made.

The tourists won the first Test 22-17 against a Bok team woefully short of game time, which wasn’t a great surprise. But the Boks won the second Test going away, by 27-9. In the process, they scored 21 unanswered second-half points and gained massive momentum for the decider.

Lions coach Warren Gatland has never been afraid to make big selection calls, but it’s fair to say his decision to persist with the fragile fullback Stuart Hogg after the first Test was a failure. Hogg just about got away with a mediocre outing in the first Test, but was horribly exposed under the high ball in the second.

That was one of the easier calls for Gatland to make, bringing in Liam Williams as the last line. The Wales wing/fullback is solid under the high ball and an elusive attacker.

In another indication of Gatland’s uncertainty, he starts with a third different centre pairing in three Tests. Bruising Irish centre Bundee Aki will challenge the Boks midfield defence with straight running. He pairs up with fellow Irishman Robbie Henshaw. Scotland’s Chris Harris, who was ineffective last week, drops out of the squad altogether.

Aki and Henshaw are former Connacht teammates and were the centre pairing when Ireland beat England on the last day of the Six Nations. The only real surprise is that it’s taken until the last game of the eight-match tour to pair the two due to a hamstring injury for Henshaw early in the tour.

Aki hasn’t played a match in three weeks and Scotland flyhalf Finn Russell, who replaces Owen Farrell on the bench, hasn’t seen action in a month.

“Finn comes on to the bench because he’s a little bit different,” said Gatland. “The two 10s are very good at what they do, but are quite similar and he offers us something different.

“That midfield has always been a bit of a discussion, a bit of a debate for us and just looking at the physicality that Bundee brought in the A game (the 17-13 loss to South Africa A on 14 July) and that combination of those two working together gave us the chance to move Robbie one out.

“We definitely want to play some more rugby and we just didn’t get that opportunity in the second half (last week). In the first half, we got some of the bounces that we did in the first Test in terms of that aerial stuff, but we got nothing from the air in the second half.”

Flank Sam Simmonds, a dynamic bundle of energy, has also been included on the bench as the Lions have opted for mobile replacements, hoping to raise the tempo in the final quarter.

But the Boks have mobility in Kwagga Smith and Marco van Staden off the bench as well as the potent and athletic hooker Malcolm Marx. Throw in Trevor Nyakane who is also quick for a big man and the Lions bench should hold no fears for the Boks if the game does speed up.

In the 2013 series between the Lions and Australia, the tourists won the first Test, but the Wallabies battled back to narrowly clinch the second. Gatland then made six changes between Tests two and three and the Lions won the decider

“You are just trying to get that balance right,” Gatland said of this week’s selection. “We did the same thing eight years ago, we made six changes, and it is a credit to the players.

“There have been so many tight calls and you are there having a long discussion about selection and trying to get the right combination and thinking about players to start and impact coming off the bench. There have definitely been some really tough and tight calls in this tour.”