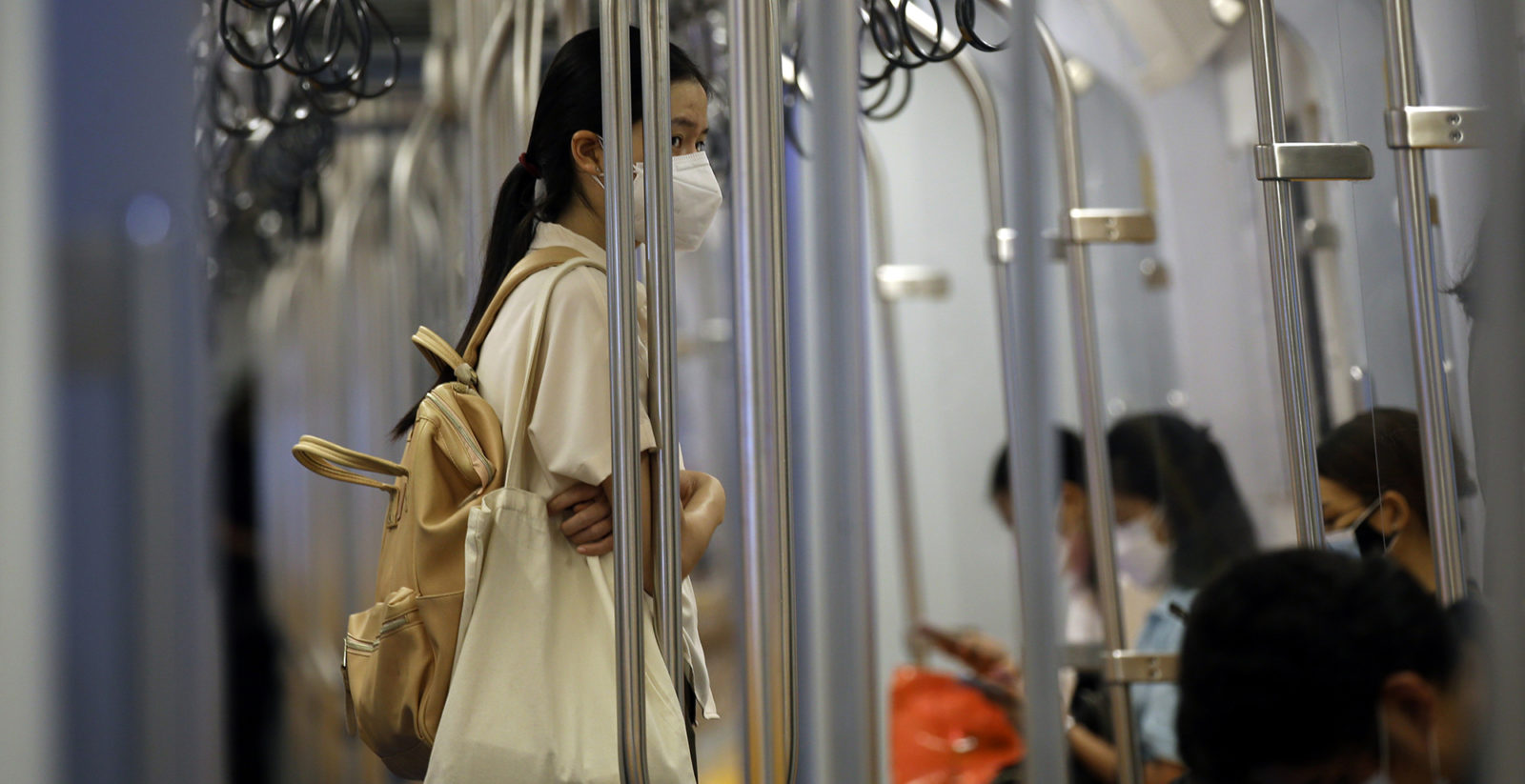 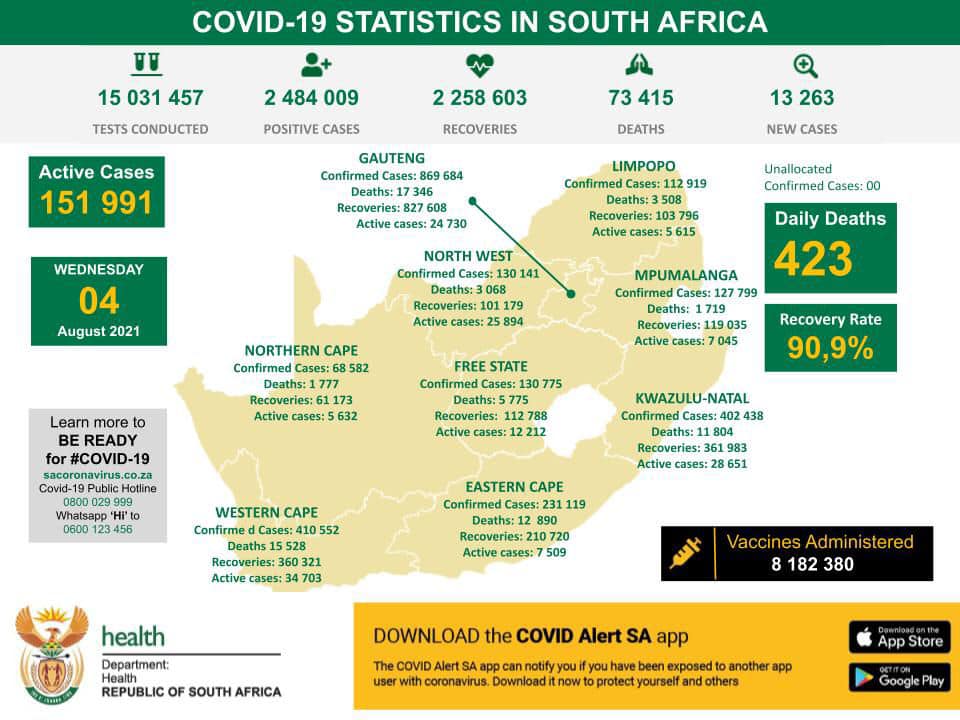 Israel, one of the world’s most vaccinated nations, called on employers to switch to work-at-home and warned that it may have to impose new lockdowns. The World Health Organization called for a moratorium on booster shots to enable poorer countries to catch up in vaccination rates.

The drugstore chain Walgreens Boots Alliance will again require employees across its US stores to wear face masks. The European Union expanded its portfolio of potential vaccines, signing an advance purchase agreement with Novavax.

Beijing tightened curbs, and Indonesia became the second country in Asia with a death toll surpassing 100,000.

Vaccines targeting the Delta variant may now be needed, given the strain’s ability to infect people with fading immunity, researchers leading a large English study of Covid shots said.

Massachusetts will require that all staffers at nursing homes and other long-term care venues get a Covid vaccine by September 1 and be fully vaccinated by October 10, state officials announced on Wednesday. The mandate includes exemptions for medical or religious reasons.

The state’s biggest long-term care association applauded the move by Republican Governor Charlie Baker, calling it a “first-in-the nation Covid-19 vaccine mandate for nursing facility workers” that would save lives. Hesitancy remained a major barrier to staff vaccination despite major education efforts, the Massachusetts Senior Care Association said in a statement, and its board had called for a vaccine mandate in May.

The Massachusetts Nurses Association encourages its members to get the shots but said it opposes the mandate because the vaccines still have only emergency use authorisation.

Massachusetts’ vaccination rates are among the country’s highest, but the state reports that among its 378 skilled nursing facilities, 155 have still not managed to get at least three-quarters of their staff vaccinated.

Organizers of the 2021 New York International Automobile Show have cancelled the event for the second year in a row, citing concerns over the spread of the Covid-19 Delta variant.

The annual event was to be held in its traditional venue, the Jacob K Javits Convention Center in Manhattan. This marks the second-consecutive year that the 121-year-old New York Auto Show was cancelled. The organisers expressed confidence the show will return to its regular spring schedule in April 2022.

Florida now has a record 11,906 adult patients hospitalised with confirmed Covid-19, up from 11,515 a day earlier, further surpassing the peak from the previous summer’s wave, according US Department of Health & Human Services data.

A total of 12 of 238 hospital facilities reported critical staffing shortages, but that number is down from as high as 33 over the weekend, the HHS data show.

UK to offer vaccines to those 16 and up

Walgreens Boots Alliance will again require employees across its US stores to wear face masks, the company said.

Workers at support offices must be vaccinated by September 30 or enroll in a coronavirus testing programme. Walgreens said it’s seeing interest in vaccines surge in virus hotspots. The drugstore chain has administered about 29 million shots in the US since the immunisation campaign started. Demand for virus tests doubled between June and July amid rising cases.

WHO calls for halt on booster shots

The World Health Organization called for a moratorium on booster shots to enable poorer countries to catch up in vaccination rates.

The halt on third doses should be in place until at least the end of September, Director-General Tedros Adhanom Ghebreyesus said at a media briefing on Wednesday. That would help achieve the WHO’s goal to vaccinate at least 10% of the population in every country by that date, protecting healthcare workers and vulnerable people.

EU in deal for 200 million doses of Novavax

The European Commission approved a contract with Novavax for up to 200 million doses of the US company’s Covid vaccine. The Novavax vaccine is under rolling review by the European Union’s drug regulator in view of a potential market authorisation.

New virus cases are rising by about 20% a week, putting them on track to exceed 1,000 in late August or early September, according to Health Minister Adam Niedzielski. At that point, the government would start with imposing new regional restrictions, he said.

Lithuania started vaccinating people in high-risk groups with a third shot on Wednesday. Patients with blood illnesses were the first to receive the top-up dose.

The Chinese capital reported three more virus cases on Wednesday. Officials in charge of the pandemic response have criticised retailers, including an Ikea store, cinemas and supermarkets for lax enforcement of curbs ranging from mask-wearing and health code-checking to social distancing.

Germany to give Astra shots to Covax

Iran hit a record number of new daily cases for the third consecutive day as the Delta variant and low vaccination rate hampers authorities’ attempts to curb the virus.

The Health Ministry reported 39,357 new cases and 409 deaths overnight. About 3% of Iran’s population is fully vaccinated.

Indonesia reached a grim milestone as more than 100,000 people died from the coronavirus, becoming the second country in Asia to breach that threshold.

After weeks of topping the world’s tally of daily deaths, Southeast Asia’s largest economy added 1,747 fatalities on Wednesday, according to data from the health ministry, bringing its total number to 100,636.

Indonesia is shifting away from its goal of reaching herd immunity as available vaccines prove less effective at stopping transmission of the Delta variant, making it possible for the virus to continue circulating even if everyone gets inoculated, according to data under review by the government.

Sasol tells workers to vaccinate or pay for tests

Sasol told the almost 20,000 people who will work on the four-week annual maintenance of its Secunda petrochemicals complex that they need to show they have been vaccinated or produce a negative PCR test every week, Netwerk24 reported.

While the fuel products and chemicals producer encourages its workers to voluntarily get vaccinated, a risk analysis found the maintenance project poses a contamination threat, the Cape Town-based news website said, citing a July 27 letter from the company’s management to employees.

Singapore will limit visitation to hospital wards from August 5 to August 18 as a measure to preserve hospital capacity and reduce potential virus transmission, the Ministry of Health said.

Hospitals will allow case-by-case exceptions for some groups, including children, birthing mothers and those who are severely ill.

Israel called on employers to switch to a work-at-home footing and tightened travel restrictions as new cases climb, warning that it may have to impose lockdowns.

Government ministries will have 50% of staff in their offices, according to a Tuesday decision by the Cabinet subcommittee on the coronavirus. The Cabinet urged the public to stop shaking hands, embracing and kissing and avoid non-essential gatherings in closed spaces.

President Joe Biden quelled a brewing confrontation with progressive Democrats with a new moratorium on evictions during the pandemic.

The Centers for Disease Control and Prevention’s order, following several days of legal wrangling within the administration, aims to keep tenants who are in arrears from losing their homes until October 3. White House officials hope that’s enough time to stand up a long-delayed $47-billion rental assistance programme.

Macau will close gyms, cinemas and bars after reporting its first cluster of local cases in more than a year. It will also shut theatres, indoor playgrounds, game arcades, beauty salons, karaoke parlors and nightclubs, the government said.

The Bloomberg Intelligence gauge of Macau casino shares fell as much as 5.5% in Wednesday trading, though casinos will be allowed to remain open for now.

Japanese Prime Minister Yoshihide Suga is facing a backlash over plans to have patients with mild infections recover at home to relieve hospitals that were caring for 80,000 coronavirus patients as of Monday.

Suga has faced criticism on social media and from the opposition party, which is unlikely to win upcoming elections but which could loosen his grip on power if it gains seats. Under his plan, doctors would monitor infected people at home, and if there’s a concern about possible transmission within the household may transfer people to hotels. Those over 50, or with preexisting conditions, would be eligible for treatment with a drug cocktail.

The Delta variant has pushed the threshold for herd immunity to well over 80% and potentially approaching 90%, according to the Infectious Diseases Society of America. That represents a “much higher” bar than previous estimates of 60% to 70%, because Delta is twice as transmissible, and significantly more dangerous than the original virus.

Herd immunity is based on the idea that when a certain percentage of the population has been vaccinated against the virus or gains immunity by a previous infection, it helps protect the broader population and reduce transmission.

Nearly 60% of Americans have received at least one dose of a coronavirus vaccine, and about 50% have been fully vaccinated, according to CDC data. DM