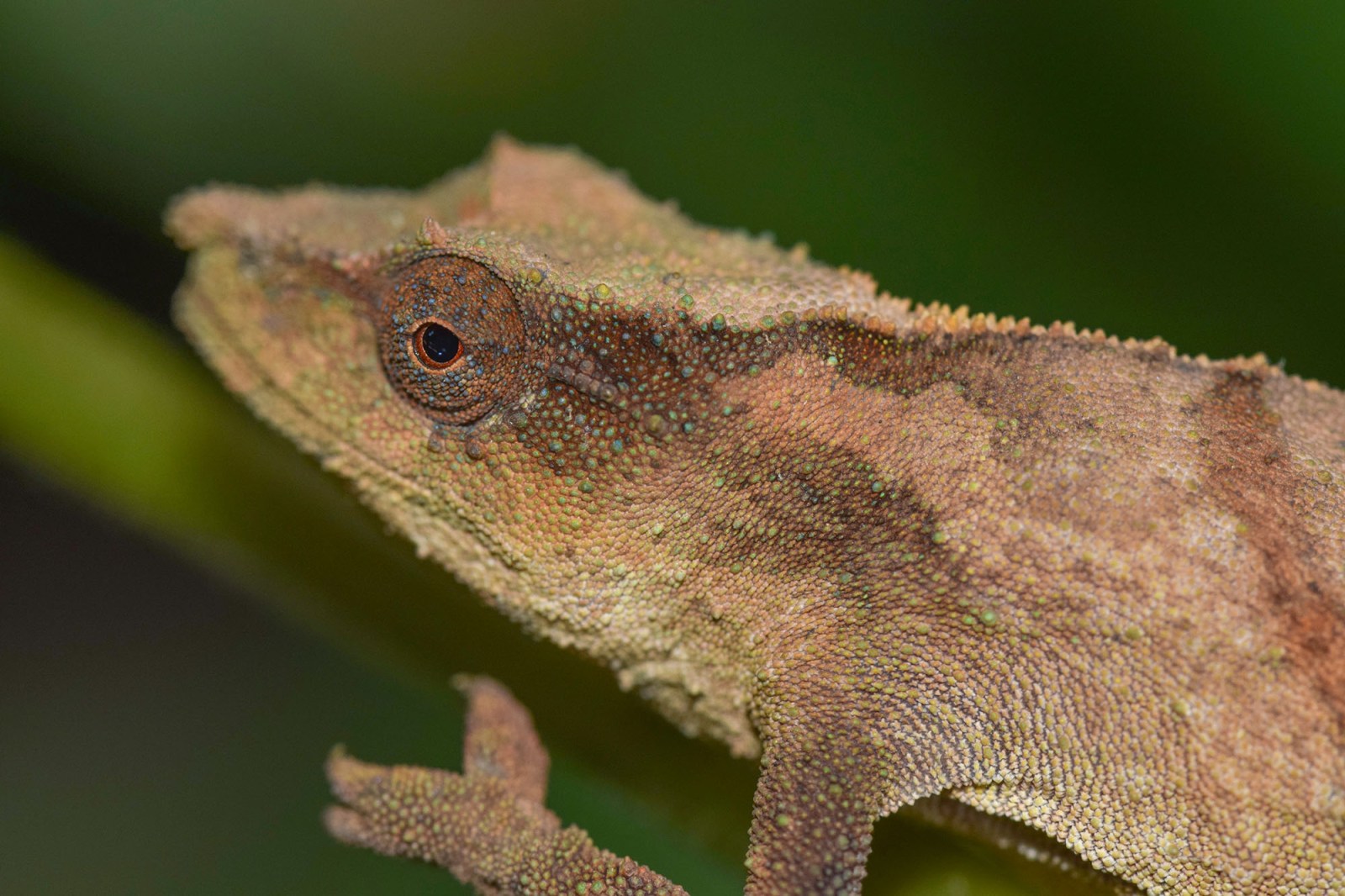 The Chapman’s pygmy chameleon is one of the world’s rarest chameleons and now clings to survival in small patches of the southern Malawian rainforest in a highly disturbed ecosystem. (Photo: Krystal Tolley)

The Chapman’s pygmy chameleon, a diminutive reptile found in the rainforests of southern Malawi, was feared to be extinct in the wild. Researchers have found a few clinging to survival. The species’ plight highlights the ecological consequences of forest fragmentation.

Finding a species that was thought to be extinct is a scientific thrill. In 1938, a curious-looking fish caught by a trawler off the Eastern Cape coast turned out to be a coelacanth — a species, known previously only from fossil records, that was thought to have been extinct for 400 million years.

Now one of the world’s smallest species of chameleon, which was thought to have possibly gone the way of the dodo, has been uncovered.

“Chapman’s pygmy chameleon, long feared to be extinct in the wild, has been found surviving in patches of rainforest in Malawi. The study is published today in Oryx — International Journal of Conservation,” a University of the Witwatersrand (Wits) statement said.

A 2014 assessment by Wits honorary researcher Professor Krystal Tolley led to the listing of the chameleon as Critically Endangered on the International Union for Conservation of Nature Red List of Threatened Species. But concerns have been mounting that the species may have run out of time.

“Comparing current-day satellite images of the species’ known habitat with those taken in the 1980s revealed dramatic forest loss. What remained had become fragmented — small patches of forest, cut off from each other. They estimate that the forest — and with it, chameleon numbers — has shrunk by 80% since the 1980s,” Wits said.

So Tolley led a research team to try to find survivors, raising R80,000 through a crowdfunding campaign — small animals can tug at hearts in a big way. Their efforts were focused on three forest patches where the species was reckoned to have had the best chance of making a go of it.

And to the delight of Tolley and her team, they scored a hat-trick — remnant populations of the reptiles were found in all three.

“When we found it, we had goosebumps and just started jumping around. While we were excited to find these chameleons still clinging to survival, we have no idea how much longer these populations will persist in these tiny patches of forest,” Tolley was quoted as saying.

The main cause of the deforestation is clearance to make way for maize and cassava. Malawi is one of the world’s poorest countries, and subsistence farming is how most of its rural population ekes out a living. One imagines that chameleon conservation will not be a priority for a poor farmer with a family to feed.

The researchers recommend that the forest patches in which the chameleons were found be incorporated into the nearby Matandwe Forest Reserve.

Fragmentation of habitat is a key driver behind biodiversity loss, which is why conservationists embrace the concept of “corridors” to link separated patches of habitat back into something resembling the original territory that was cut up.

“Let’s start by imagining a fine Persian carpet and a hunting knife,” the natural history writer David Quammen wrote in The Song of the Dodo: Island Biogeography in an Age of Extinctions. “We set about cutting the carpet into 36 equal pieces, each one a rectangle. But what does it amount to? Have we got 36 nice Persian throw rugs? No. All we’re left with is three dozen ragged fragments, each one worthless and commencing to come apart.”

In the case of the Chapman’s pygmy chameleon, which only grow to 6cm in length and live in the rough and tumble of the forest floor, fragmentation prevents the species from moving between forest patches for breeding. This isolation prevents a healthy level of gene flow between the populations. The shredding of its habitat shreds the species’ prospects for survival among the fragments of this former rug of life. DM/OBP