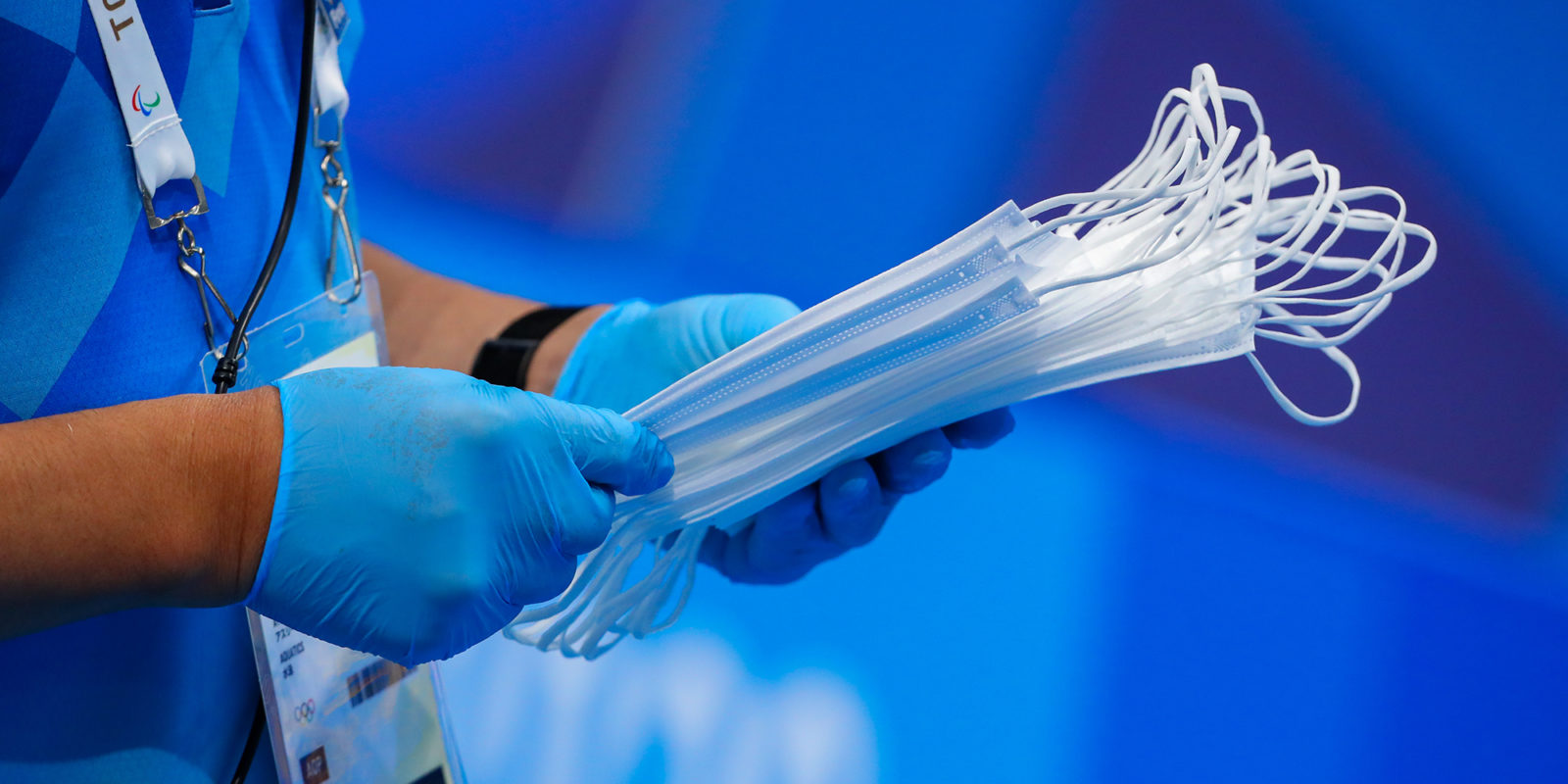 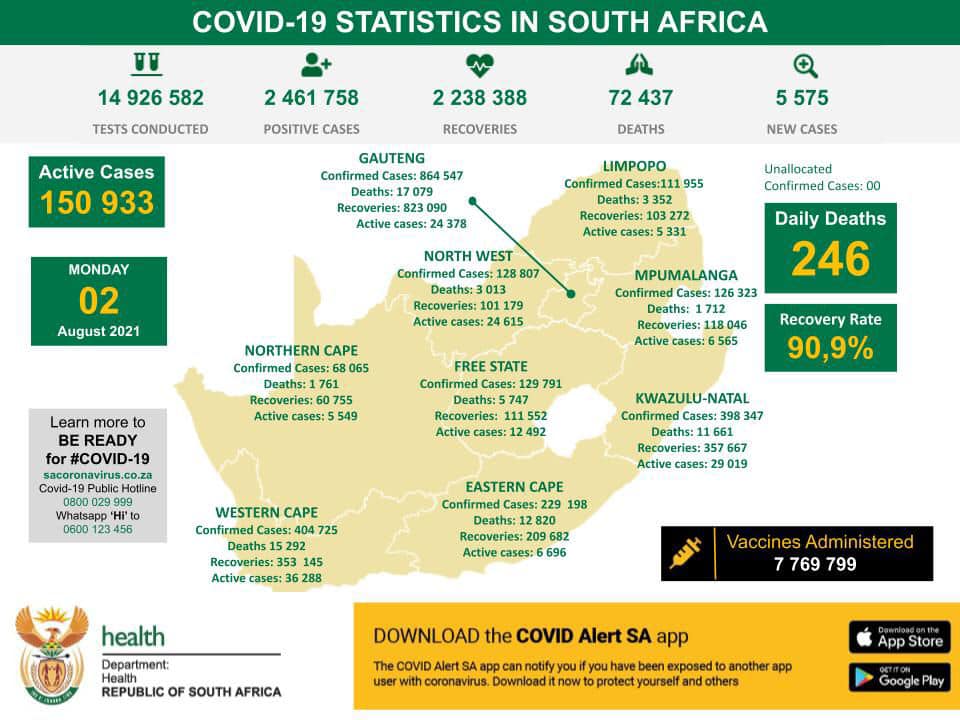 Seventy percent of US adults have received at least one dose of a Covid-19 vaccine, a key milestone in the fight against the pandemic that comes almost a month later than President Joe Biden’s original goal.

San Francisco and its surrounding counties are reinstating mask requirements in indoor public spaces for all individuals, regardless of vaccination status. New York City “strongly” recommended wearing masks indoors, though no mandate was issued.

China is confronting its broadest coronavirus outbreak since the pathogen emerged in late 2019, with cases now in 14 of 32 provinces. India is likely to see a new, though smaller, wave of infections, according to the forecaster who accurately predicted India’s Covid peak earlier this year. Pakistan will tighten curbs in major cities.

Senator Lindsey Graham said he tested positive for Covid-19 despite being vaccinated, becoming at least the third member of Congress to recently report an infection.

The South Carolina Republican said in a statement that he began having “flu-like” symptoms on Saturday and that he will quarantine for 10 days.

San Francisco and its surrounding counties are reinstating mask requirements in indoor public spaces for all individuals, regardless of vaccination status, after a surge in Covid-19 cases in recent weeks.

Seven counties in the Bay Area adopted the new orders, including Silicon Valley’s Santa Clara and San Mateo, along with the city of Berkeley. The mandate was to take effect after midnight on Tuesday, health officials said.

Related, the developer of the Hudson Yards megaproject on Manhattan’s West Side, will fire employees that haven’t had at least one Covid-19 vaccine shot by the end of the month.

In April, Related told employees that they intended to make vaccines mandatory once there was enough supply, according to Jon Weinstein, a spokesman for the firm. Corporate staff were required to get to their first shot by 1 June and the new mandate applies to site and building staff. There are exceptions for medical or religious reasons.

Denver Mayor Michael Hancock ordered all the city’s 10,000 municipal workers to be vaccinated by the end of September as Covid-19 Delta variant infections accelerate. “No one wants to relive the horrors of last year,” Hancock said at a news conference on Monday. The order also applies to private-sector workers in hospitals, nursing homes and related institutions, Hancock said.

Facebook will require all people working at its US campuses to wear masks regardless of their vaccination status effective on 3 August, the New York Times reported, citing the company.

Full compliance is required by 7 September, Murphy said on Monday at a press briefing. Private employers are encouraged to implement tougher standards, he said.

The owner of Equinox gyms and SoulCycle studios will require employees and members to show proof of Covid-19 vaccination, beginning next month.

The effort will begin with New York City locations before similar policies are rolled out in all of its markets, Equinox Group said Monday in a statement. The company will require one-time proof in the form of a physical immunisation card, a photo of such a card or a digital vaccine card. Equinox said it will work to find alternative solutions for individuals who require medical or religious accommodations.

Seventy percent of US adults have received at least one dose of a Covid-19 vaccine, a key milestone in the fight against the pandemic that the country hit nearly a month later than President Joe Biden had hoped.

After falling dramatically since April, the pace of US vaccinations has recently accelerated due to the rapid spread of the Delta variant of coronavirus. The US was averaging more than 72,000 new infections a day in a Delta-fuelled resurgence of the virus as of Friday, according to the Centers for Disease Control and Prevention.

New York City Mayor Bill de Blasio said he is “strongly” recommending that even those who have been vaccinated against Covid-19 wear masks indoors, stopping short of mandating such face coverings.

The mayor’s suggestion on Monday comes as the nation deals with a new wave of coronavirus cases due to the Delta variant.

The mayor has focused heavily on the vaccination effort as a way to fight the surge and said newly hired city workers will now have to be vaccinated before they can start on the job.

Governor Andrew Cuomo wants workers at the Metropolitan Transportation Authority and the Port Authority of New York and New Jersey to be vaccinated or get tested regularly to stem a surge of cases linked to the Delta variant.

At a press briefing on Monday, Cuomo urged city and town leaders to follow revised masking guidance issued by the US Centers for Disease Control and Prevention, saying the state can’t do so without a new law.

“I believe it is in your business interest to run a vaccine-only admission,” the governor said.

Kenya has approved the emergency use of Johnson & Johnson and the Pfizer-BioNTech Covid-19 vaccines.

The East African nation expects to receive 13 million J&J doses starting this month. Kenya’s plan to inoculate its entire adult population of 26 million people by the end of 2022 is reliant on J&J vaccines.

About 10 million people will be vaccinated by the end of December, President Uhuru Kenyatta said last month. Kenya has so far inoculated less than 2.5% of its population of about 53 million people, using mostly doses from AstraZeneca.

The Slovak Finance Ministry has started a vaccine lottery. A weekly draw among those who are fully vaccinated will have the highest prize of €100,000 ($119,000) and the total budget allocated for the programme amounts to €10 million. Slovakia has vaccinated 39% of its population, less than the EU average.

The German government’s desire to make the vaccine available to a younger set of the population goes beyond advice published by the government’s independent vaccine commission. The authority, known as STIKO, recommends inoculating 12- to 17-year-olds whose pre-existing conditions put them at heightened risk from the coronavirus — or those who are in regular contact with people who are in particular danger.

Germany’s weekly case average of 2,195 was the highest since 12 July, the Robert Koch-Institut said. The seven-day incidence rate per 100,000 inhabitants rose to 17.5, the 26th consecutive gain.

As of Friday, 52% of the German population was fully vaccinated against Covid-19, and just under 62% had received at least one shot, according to the latest health ministry data.

Germany’s economy is poised for a strong upswing in the second half of this year, with activity likely to reach pre-crisis levels as soon as this summer, the Bundesbank said.

Iran reported 37,189 new Covid-19 cases over the past 24 hours, the country’s highest case count since the beginning of the pandemic.

The death toll rose by 411 overnight, the highest since 28 April, bringing the country’s coronavirus fatalities to 91,407, with more than 3.9 million infections.

The head of France’s vaccination strategy council said collective immunity, representing as many as 90% of French who are older than 12 and are vaccinated, could be reached by early autumn.

Speaking in an interview with French radio RTL on Monday, Alain Fischer called the present vaccination pace “very fast” and that those still reluctant to get the shot had to be convinced. Fischer said a third injection might be possible for those who are immuno-depressed and those above the ages of 75 to 80.

As of 1 August, as many as 63.2% of the French had received one vaccine shot, while 52.6% are fully vaccinated, according to the French health ministry.

China is confronting its broadest coronavirus outbreak since the pathogen emerged in late 2019 after the Delta variant broke through the country’s defences. Cases have now been recorded in 14 of 32 provinces.

While the overall number of infections — more than 300 so far — is much lower than outbreaks elsewhere, the wide spread indicates that the variant has been on the loose for some time and is alarming officials.

India recorded 40,134 Covid-19 cases on Monday, taking the country’s total tally to 31.7 million. It has administered 472.2 million vaccine shots so far, but only 7.6% of the country’s population is fully inoculated against the virus, according to Bloomberg’s vaccine tracker.

Covid-related deaths rose by 422 in a day to 424,773, according to the latest data from the Indian health ministry. DM