Creative survival in Zimbabwe: Unemployment and fiscal crisis force the youth to get innovative 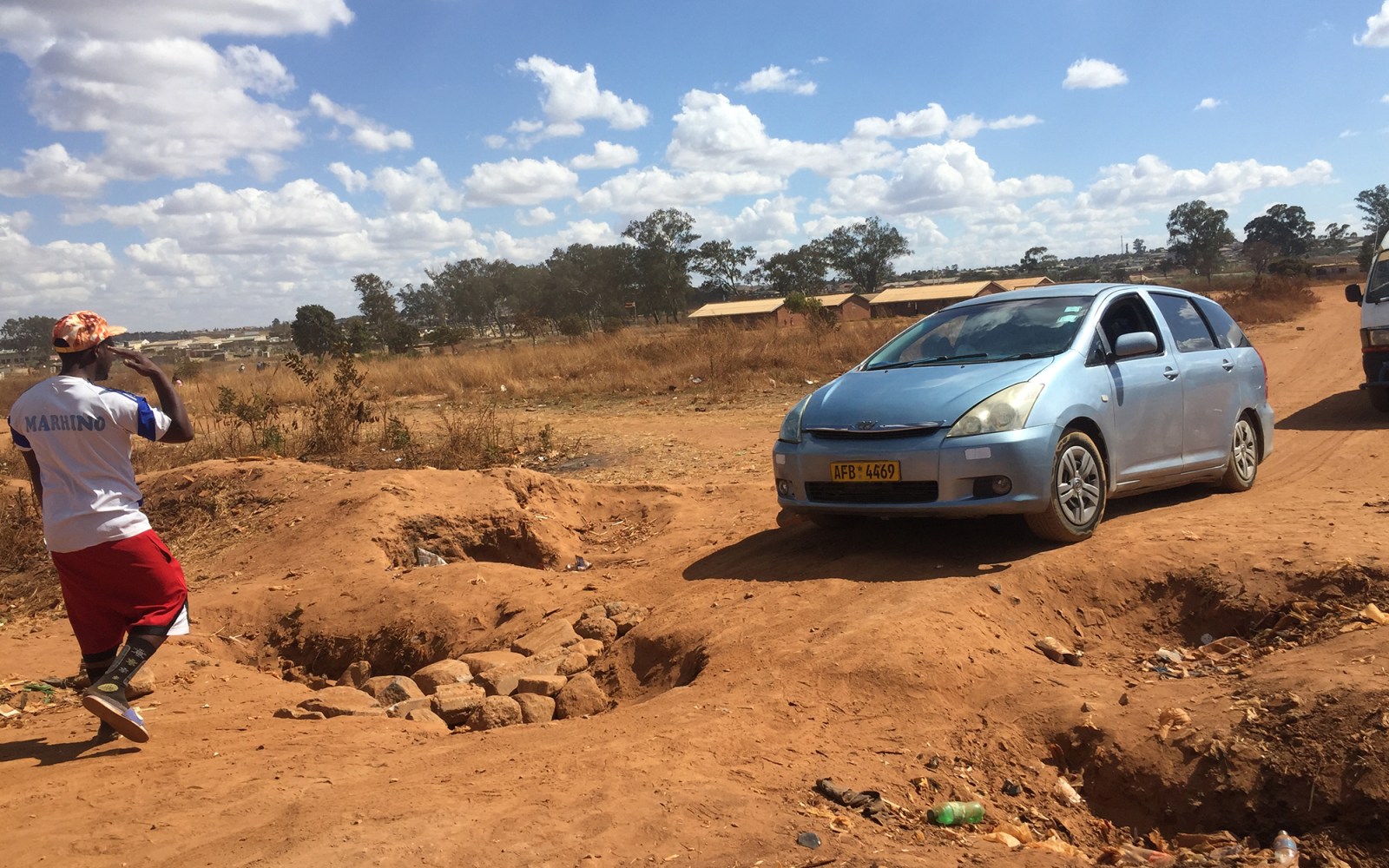 Tafadzwa Chidzungu (28) directs and regulates motorists over a makeshift ramp he built and controls in Harare, Zimbabwe. (Photo: Supplied)

Zimbabwe’s economy has been in dire straits for decades, with many industries and multinational corporations either closing down or moving to neighbouring countries.

On a meandering illegal dirt road that goes through marshy terrain and via an unfenced secondary school football pitch, Tafadzwa Chidzungu (28) directs and regulates motorists over a makeshift ramp he built and controls. It allows cars to avoid a permanent police roadblock along the main road that leads to Harare, as well as those who simply want to connect between neighbouring locations of Kuwadzana Extension using a shortcut.

Nicknamed “MaRhino” because of his solid, heavy build, Chidzungu spends his days at the small and rugged ramp, interacting with motorists and pedestrians alike.

The surrounding community had dug a long trench to block traffic from using the illegal dirt road – until one day a major traffic jam blocked the main road.

Chidzungu quickly decided to fill up a portion of the trench to allow vehicles to pass. This gave birth to his ramp, which is sometimes jokingly referred to as MaRhino’s Tollgate by the community.

“I started doing this last year in December. The cars were taking a longer route after avoiding a roadblock so I figured out this makeshift ramp to assist motorists and so it automatically became a relationship between them and me,” Chidzungu tells DM168.

“Like many young people out there, growing up in a tough economic environment such as our own has conditioned some of us to naturally adapt by creating the means to survive wherever there is a way.”

Call it innovation or a case of passive motorists, Chidzungu collects not less than Z$4,000 (about R500) in a day as tokens of appreciation from drivers.

“There are no jobs and many people have been leaving the country in search of greener pastures. I am one of those who decided to remain behind and face the challenges as they come each day,” Chidzungu says.

According to the Zimbabwe National Statistics Agency, the last recorded unemployment rate – in 2019 – was 16.4% of the working age population.

The agency said the informal sector employed at least 2.2 million people, constituting about 76% of total employment.

It is, however, estimated that about six million Zimbabweans live in the diaspora. More than two million live in neighbouring South Africa alone; others moved to Botswana and Namibia in search of employment and better living conditions.

In its 2020 annual report, the World Bank ranked unemployment figures of other countries in the Southern African Development Community. South Africa was at 28.7%, Namibia at 20.4% and Botswana at 17.7%.

Like many other young people not in formal employment, Chidzungu had been working as a taxi rank tout, or hwindi, a slang name derived from the action of hanging out the taxi window or door calling out to travellers. Lockdown regulations called for a ban on minibus taxis for public transport, leaving him with no source of income before he set up his ramp in December 2020.

Since then, Chidzungu has been operating his ramp from 6am to sunset, together with his brother Romeo. On one side the ramp is filled with enough soil to allow one set of wheels to pass, while the other side is left to be completed with a number of rocks lined up in a row. Chidzungu occasionally removes the last rock, which completes the ramp, effectively giving him power to determine whether a car goes through or not.

“Yeh sire, yeh sire, tipei mari, giri bag!” Chidzungu briefly breaks our conversation as he joyfully shouts at an approaching motorist in a mix of slang, old English and Shona, meaning “Sire, give us any money that you will.”

The relationship is clearly symbiotic. The motorist sticks his hand out to give MaRhino Z$50, enough to buy half a loaf of bread. Many more vehicles pass through the ramp and the interaction is more or less the same.

Chidzungu is the first-born son in a family of three and helps his also unemployed father to look after the family. While providing he also took his Class 2 driver’s licence from his earnings, and hopes to secure a job in future. Adding to his five ordinary level passes, the resilient Chidzungu wrote his mathematics paper during his touting days with minibuses. His friends laughed at him but were shocked when he showed them his results after he passed.

“What makes it easy for me is that I don’t demand money from anyone. The motorists always give me whatever they have out of free will and if anyone comes and they don’t have any money, I always let them pass,” he explains. Once the cars join the tarmac from the dirt road past Chidzungu’s ramp, they are met with countless potholes. This is the general state of roads in Zimbabwe’s capital, as well as the rest of the country. In February 2021, the southern African country declared the state of roads a national disaster, blaming mismanagement by the local authorities, which are led by the opposition Movement for Democratic Change (MDC). More young, unemployed people like Chidzungu have taken advantage of the poor state of the roads to fix the potholes themselves and collect money from grateful motorists.

Clearly this kind of innovation and means of survival does not end with Chidzungu and his ramp in Kuwadzana Extension.

Multimillion-dollar corruption scandals have characterised the Zimbabwe National Roads Authority, alongside many other government ministries and parastatals.

In 2020, Transparency International ranked Zimbabwe among the most corrupt countries in the world at number 157 out of 180 in its Corruption Perceptions Index (where a ranking of 1 indicates the least corrupt country).

Speaking during a virtual conference on the fifth African Anti-Corruption Day, President Emmerson Mnangagwa promised to “put in place multiple mechanisms to tackle the scourge of corruption, which remains one of the greatest threats to the country and Africa’s development”.

Zimbabwe’s economy has been in dire straits for decades, with many industries and multinational corporations either closing down or moving to neighbouring countries. DM168