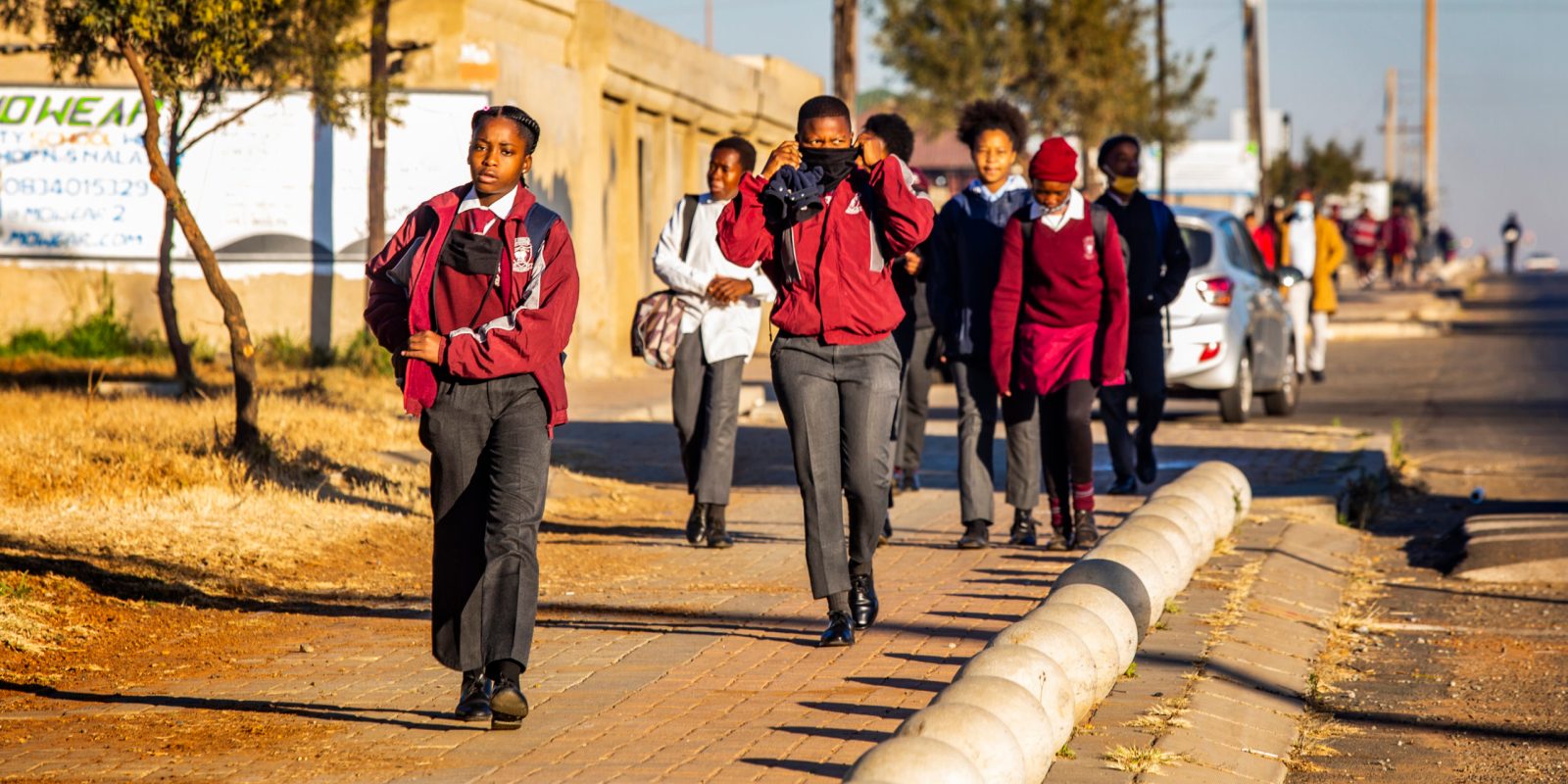 The radical transformation forced temporarily on the education system by Covid-19 gave educators a unique chance to manage small classes. But now teachers are being forced to regress to the prior ‘normal’ — overcrowded classrooms in most public schools.

Trevor Shaku is the National Spokesperson of the South African Federation of Trade Unions, Saftu.

The basic education sector’s programme to vaccinate teachers lowers anxiety among educators — especially for those with comorbidities, the life-saving jab restored their confidence in going to work and serving the future generation. Breakthrough infections of the Delta variant of Covid-19 are still going to be a worry, especially with evidence that even if we are vaccinated twice, we are still carriers and so still need to mask up.

But with the vaccination of educators and non-teaching staff comes the end of the rotational system of learning which had been forced on the Department of Education by Covid-19 social distancing requirements. Much should be celebrated about the end of rotation. However, educators are re-introduced to an old normal that is abnormal — overcrowding.

Due to compliance with social distancing, schools had to take 50% (even less in other schools) of learners and adjust to a rotational basis. The 1.2-meter distance between desks and no sharing of desks in classrooms meant classes were reduced to 20 learners in most schools.

In this sense, Covid-19 gave educators a taste of a radically transformed classroom. Unfortunately, this radical, overdue reform to the classroom was directed at and its fate depended on the containment of the pandemic.

This week, educators may feel saddened by the gazetted plan to commence normal school capacity from Grade R to Grade 7 which began on 2 August 2021. Not so much because of the apparent struggle to enforce social distancing, but more so because it means a return to overcrowded classrooms.

Overcrowding and its consequences

The radical transformation forced temporarily on the education system by Covid-19 gave educators a taste of managing small classes. Small classes are far superior because they allow a focus on teaching rather than the disciplining of learners.

Under normal circumstances, the abnormal size of classrooms — overcrowding — is the order of the day in most public schools.

Depending on the number of learners in a grade, availability of classrooms and the number of educators in a school, the classroom sizes differ per school and grade. Based on these factors, most public schools hover around a minimum of 40 learners, and a maximum of 70 learners.

The negative consequences of overcrowding are that classrooms are noisy. Teaching time is wasted on discipline. Educators cannot give attention to the needs of all learners and attend to other barriers to learning which may hinder the academic progress of learners.

In a school that uses a 30-minute period and has overcrowded classrooms with the naughtiest of kids, an educator may spend 10-15 minutes on discipline, and 15-20 minutes on teaching.

Educators cannot adequately differentiate their teaching instructions, their assessment programmes, and — given the lack of internet access — their teaching material for many learners in overcrowded classes. That there is no positive consequence of overcrowding, is obvious.

The struggle by the learner-rights NGO Equal Education gave birth to the Regulations Relating to Minimum Uniform Norms and Standards for Public School Infrastructure, which requires mandatory compliance from the Department of Basic Education (DBE). Despite these regulations and the known infrastructure backlog grant established to aid the education infrastructure, the government is still far behind in meeting its infrastructure obligations. This is not because of austerity measures carried out by the Treasury only, but also out of sheer incompetence of government officials in the sector.

For instance, the 2020/2021 National Education Infrastructure Management System (Neims) report shows that out of a total of 23,276 schools in the country, 17,832 have no libraries, 19,840 have no natural science laboratories and 15,584 have no computer laboratories/centres. Even in schools that have computer centres, such centres are often small and contain old, worn equipment.

In February 2020, Gauteng Premier David Makhura promised to build 100 new schools and reopen 70 schools in the next 10 years. In 2015, the KwaZulu-Natal DBE admitted the need for an extra 6,000 classrooms across the province to eliminate the classroom backlog.

But Treasury has cut R2-billion from the infrastructure backlog grant in this financial year. Hellbent on keeping spending within the limits of their self-imposed fiscal restraints, the Treasury is committed to spending below inflation from 2020 to 2024.

Even if the department progressively increased classrooms and eliminated the backlog in schooling infrastructure to meet the increasing learner enrolments, this does not solve overcrowding instantly. It will equally require an increase of the educating staff.

The establishment of educator posts is determined by the LER. The National Early Childhood Development project held that at the turn of the previous decade, an appropriate LER would be 25:1. The average LER for the Organisation for Economic Cooperation and Development (OECD), of which SA is a member state, is 16:1. The SA public schooling average LER is nowhere near this; it floats above 30:1. Only schools for the children of the rich were at 16:1 in 2019.

To lower the LER to acceptable levels, Prof Martin Gustafsson estimates that it would require feeding 100,000 or more extra teachers into the education system. Disappointingly, the document, compiled at Stellenbosch University, targets intakes of new educators not for extra posts, but to fill existing vacant posts created by retirees.

Given SA’s neoliberal monetary and fiscal policy — guided by neoliberalism — the country will not move closer to a progressive LER of 25:1, let alone achieving the LER of its peers in middle-income countries, or even the poorest African nations. It is always humiliating to consider the World Economic Forum assessments of South Africa’s educational attainment, and discover they rank us near the very bottom of the charts.

The Treasury has targeted the public sector wage bill as a site for cuts. This means not only are wage increases below inflation, but there is also a moratorium on the expansion of public sector staff. Further, it is difficult to fill empty existing posts, of which Basic Education Minister Angie Motshekga admitted there are 24,556 unfilled posts in the basic education system.

In their submission to Parliament, educators’ unions have lamented that understaffing creates overload for educators, the psychological unwellbeing resultant from several factors and poor infrastructure.

Based on neoliberalism and the fiscal restraints Treasury is committed to, SA public education will continue to decline in quality. The same is true for other departments such as health which in the recent period has seen an increasing number of horrors in hospitals and deaths that could have been averted.

Due to cuts on government expenditure, and to a lesser extent, management bungling of schools, many schools continue to lack crucial facilities and resources such as internet connectivity for teaching and learning.

Most schools have made internet connection the golden preserve of the administration office, not recognising that it has become a minimally necessary tool for learning and teaching. In conventional teaching methods of chalk-chalkboard-and-textbook, little can be done to differentiate teaching and assessment to meet the educational needs of learners with barriers to learning. The internet can be a brilliant tool to carry out such curriculum differentiation in teaching and assessment.

Despite becoming full-service schools, many schools remain without wheelchair ramps. Inclusive education remains the exclusive preserve of the Model-C school children in income quintiles 4 and 5, and in independent schools. The children of the working class who have different educational needs are meanwhile excluded by conventional, exclusionary methods of teaching.

In this state of things — where the government and its monetary strategists are devoted to neoliberal fiscal restraints, at the expense of poor people who depend on the government for services — children of the working class are facing a gloomy future.

Educators wish that the Treasury could expand their fiscal limits to end overcrowding, the shortage of educators and lack of infrastructure. But educators must reckon that a neoliberal capitalist rule is incapable of this, and that, only a socialist government can reject the artificial fiscal and monetary restraints and spend adequately for the betterment of its people. DM