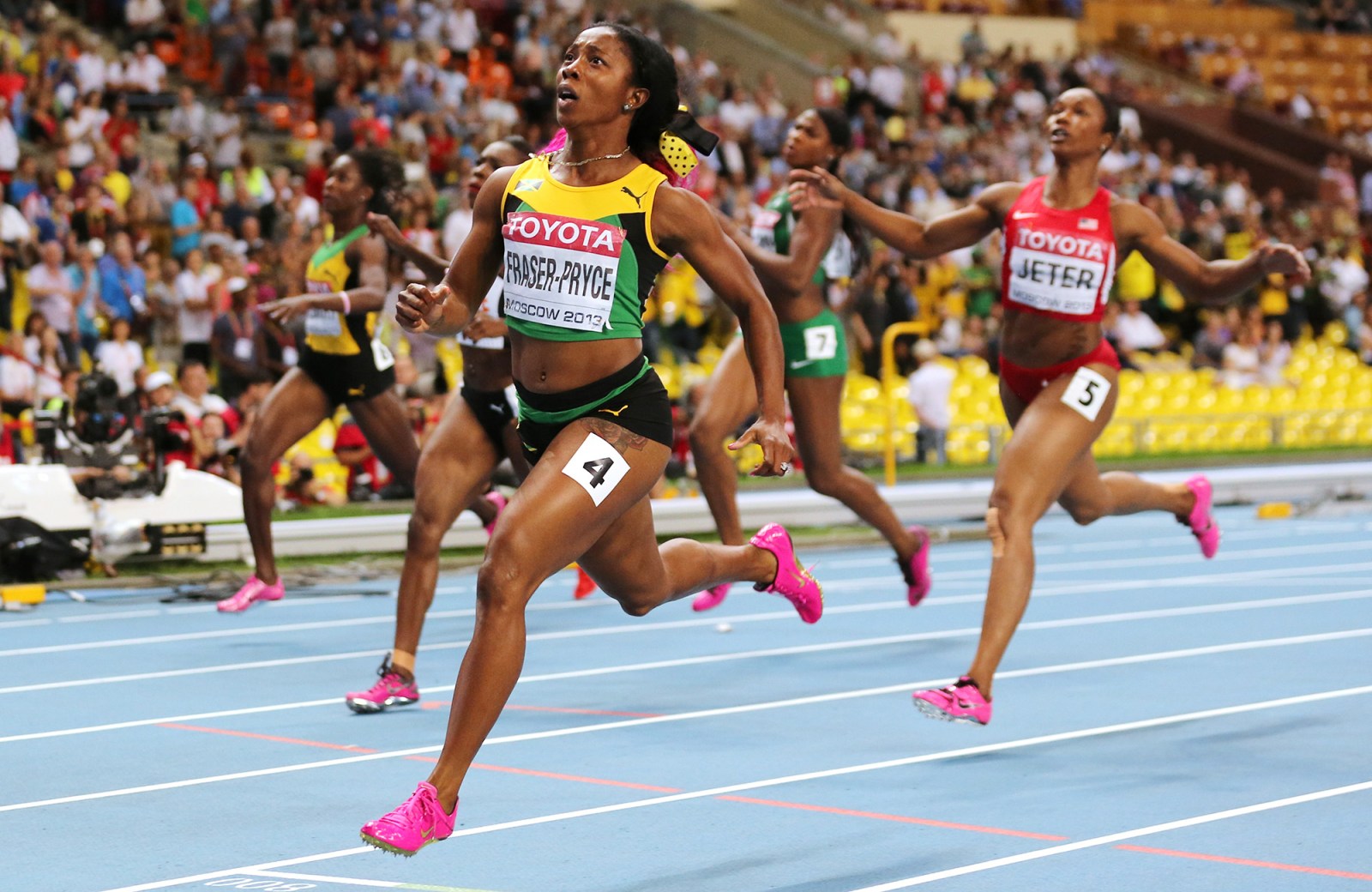 Shelly-Ann Fraser-Pryce of Jamaica crosses the line to win gold in the Women's 100 metres final during Day Three of the 14th IAAF World Athletics Championships Moscow 2013 at Luzhniki Stadium on August 12, 2013 in Moscow, Russia. (Photo by Ian Walton/Getty Images)

The Jamaican will be looking to make history on Saturday as the first woman to win three Olympic 100m gold medals and cement her place as one of the transcendent talents in the sport.

Thirteen years after her triumph in Beijing, at the age of 34, and having taken time out to have a baby, Fraser-Pryce arrived in Tokyo on the back of an astonishing 10.63-second run and as hot favourite to match compatriot Usain Bolt with a third gold in the blue-ribbon 100m event.

The performance made her the world’s fastest woman alive – the time topped only by Florence Griffith Joyner – and is the fastest sprint in more than three decades, a performance that surprised even Fraser-Pryce herself.

“I never expected I would run 10.6,” she said after the June race. “Because 10.6 has been a dream, a goal, I’ve been working so hard, being so patient to see it finally unfold. I’m so ecstatic.”

Things haven’t gone completely smoothly this season as she had a disappointing fourth-placed finish in the opening Diamond League meeting of the season in May, where she lost to Britain’s 200m world champion Dina Asher-Smith.

But she won her next Diamond League race in Doha, then stunned the sport with her 10.63 and followed up with a Jamaican national title in 10.71.

Fraser-Pryce is one of a trio of talented and explosive athletes in the Jamaican team that could collect a clean sweep of the medals.

She ran the second-fastest time this year (10.71) on her way to defeating Fraser-Pryce in Hungary three weeks ago, a sign that the 29-year-old may not be ready to relinquish her Olympic title just yet.

Another Jamaican, Shericka Jackson, the 400m Olympic bronze medallist in Rio, has focused on short sprints this year and has run her way into contention.

She promises to be in the medal hunt after producing the fourth-fastest time of 2021, finishing behind Fraser-Pryce at Jamaica’s national championships with an astonishing time of 10.82.

The US’ chances of a first legal gold since Gail Devers triumphed in 1996 (Marion Jones was stripped of the 2000 title for doping offences) were massively reduced after national trials winner Sha’Carri Richardson was ruled out after testing positive for cannabis.

Richardson’s ban means that 26-year-old Javianne Oliver carries the burden of challenging for medals, but her best of 10.96 suggests she might struggle to compete at the very sharp end.

Britain’s hope of a first medal in the 100m since 1960 rests with captain Asher-Smith, the 200m world champion.

She has not lost this year and came second at the 2019 world championships behind Fraser-Pryce. With a personal best of 10.83, Asher-Smith is a true contender for the podium in Tokyo, and if everything goes her way and the Jamaicans are a fraction off, she could even dream of a first women’s 100m gold for her country.

Fraser-Pryce, however, is vastly experienced and will start as the hot favourite. “Shelly is the only person who can lose this race,” Usain Bolt told Reuters recently. “All she has to do is go out there and execute and it shouldn’t be a problem.”

Round one of the race is on Friday, the first day of the athletics programme, with the final on Saturday night. Reuters/DM