Ibaaku’s search for a sacred place 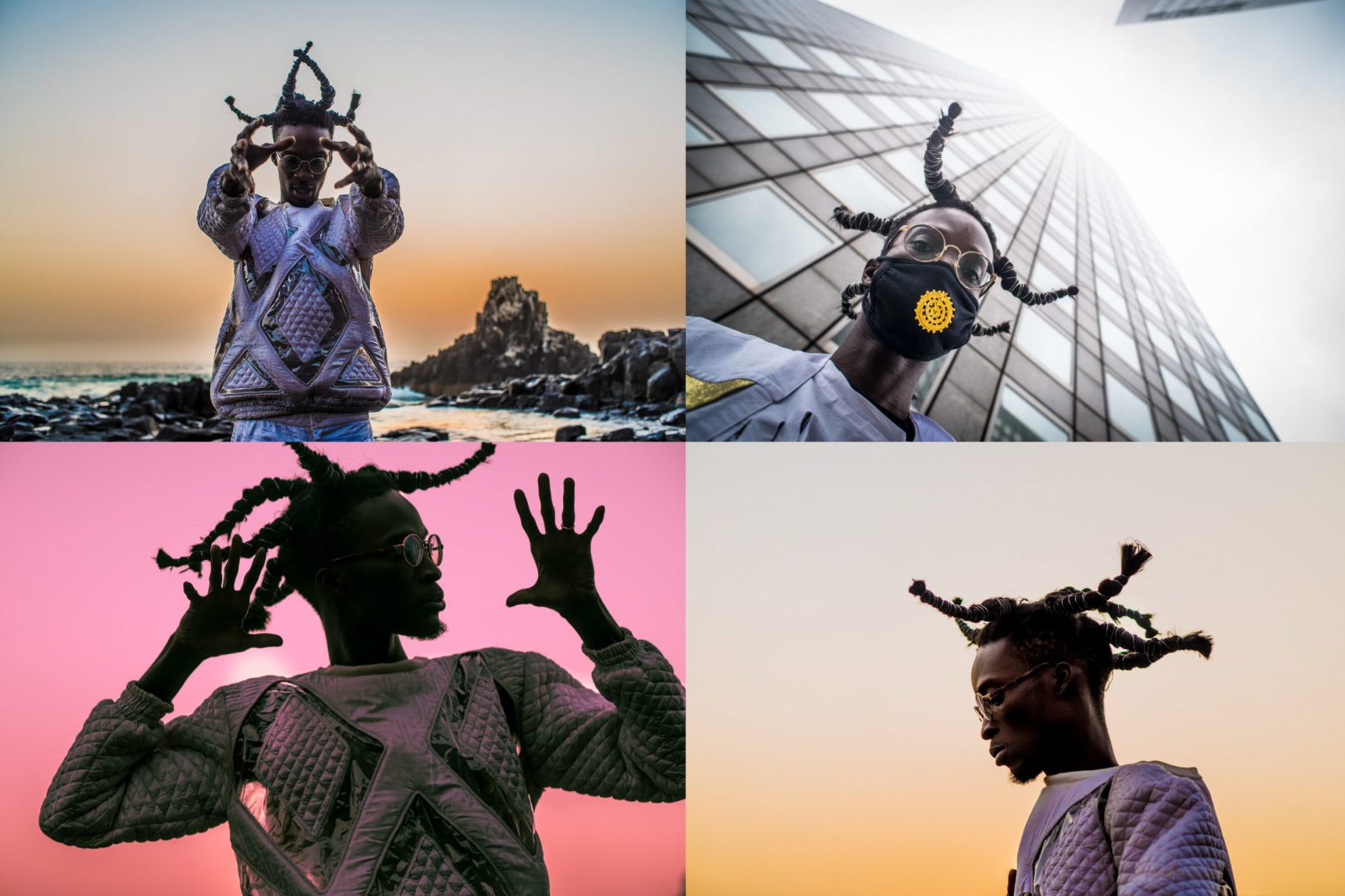 How do you describe Ibaaku? It is a half-human, half-alien persona born out of an art fashion show in the psychedelic mutant city of Dakar. It is also multidisciplinary Senegalese artist Stephen Bassene’s groundbreaking music project. Ibaaku isn’t interested in only blurring boundaries, it also wants to collapse them. The Afro-futurist experiment dissolves the line between author and work, musical genres and time. This is what makes it so powerful.

Bassene was on tour in June this year promoting his new mixtape, Neo Dakar Vol 1. The project combines beat-tape sketches, abstract sound art, delicate pop songs and club music to create a forward-looking portrait of the city he calls home. He explains that Ibaaku was born when Senegal’s Selly Raby Kane performed Alien Cartoon, an art fashion show, at the 2014 Dakar art biennale.

“Alien Cartoon told the story of an African city invaded by aliens and it was in this context that the character of Ibaaku came into play,” Bassene says. “A being half-man, half-alien, who is in a way a creative force that will unite the antagonistic forces of the story.”

Bassene describes the art fashion show as a blend of science fiction, magical realism and fantasy, which he says resonates with the Senegalese imagination because the “unseen world”, which involves “conversations with spirits”, is a part of Senegal’s culture and daily life.

Bassene created Alien Cartoon’s soundtrack using raw, repetitive rhythms from the Casamance region, the area of Senegal south of The Gambia, his home country. He took these rhythms, which he says have spiritual and transcendental meaning, and fused them with other sonic influences to create a future-oriented work of art. Djula Dance from Alien Cartoon, for instance, certainly has African ancestry, but it is a shimmering futuristic vision, not an ethnographic relic.

The soundtrack to the show was released about two years after it was created. “We decided to release the soundtrack as an extension of the fashion collection,” he says. “Because we felt that it was needed to bring more alternative sonic acts in our local scene where experimental acts are rare.”

Ripples in the same pool

The tag “Afro-futurist” often accompanies obvious references to Sun Ra and George Clinton, as if decades later Afro-futurism has still not progressed beyond these touchstones. But Bassene insists Afro-futurism is more than only the aesthetic. Ideology and spirit are vital components.

Influences on his Afro-futurist world include the works and writings of Senegalese historian and anthropologist Cheikh Anta Diop; the early experimental electronic recordings of Cameroonian Francis Bebey; the legacy of Ethiopian jazz, which saw the rise of great composers such as Mulatu Astatke; and the angry revolutionary guitars of Zambia’s 1970s Zamrock scene. He also embraces newer music, such as South Africa’s gqom and Tanzania’s singeli, as more recent ripples in the same pool.

Bassene says the sounds and rhythms of southern Senegal, which he is studying, are not central to contemporary electronic pop music. But they have much to reveal about the future of urban contexts.

“I feel those rhythms and sounds are [neither] ancient nor futuristic,” he says. “They are triggering emotions, whether those emotions are from the past, the present or the future. This is what motivates my approach.”

Bassene describes Ibaaku’s music as “Afro-hypnotique experimental”. He says, “Most of the time when I compose a piece, I can play around with a single loop for hours. That’s when I feel I’m in the zone, you know. That feeling of infinity and eternity is totally freeing for me. I’m trying to reach a sacred place, a transformation of the self.”

For Bassene, this state often emulates the spirit found in initiation ceremonies or healing rituals in Senegal and other parts of the world. “I’m carrying myself to new fields and in quite a cinematic way, I’m building a story,” he says. “That’s what I’m seeking in my music, elevation to higher places, new fields that have never been explored before.

“I’m seeking rhythms and sound that carry feelings of elevation, healing and foreseeing. I search for trance states in my music to open up new worlds. I don’t see songs in terms of genre but more like textures or moods.”

Five years after Alien Cartoon became Ibaaku’s debut album, Bassene is back with a new offering, Neo Dakar Vol 1, which finds the persona exploring the mutant depths of the city.

“I wanted to paint the city of Dakar as the main character of the story,” says Bassene. “Like a hybrid entity that is unfolding and changing at an astounding speed.”

The artist says Dakar has experienced a “renaissance of creativity” over the past decade and because he also works as an author, radio host and visual artist, he has been active in documenting this cultural moment. The mixtape was a way to “reflect on the city’s new cultural scene” and to explore the new urban environment of Dakar and how it grows “wildly and often without any consideration for the ecosystem”.

While Neo Dakar Vol 1 features a host of current talent from the city, it also acts as a tribute to some important figures from Senegal’s musical past. Ndiaga Mbaye, Coumba Gawlo Seck, Youssou N’Dour and Samba Diabare Samb all pop up on the mixtape. Bassene says including them was about bringing great Senegalese artists’ work back to life to be heard by new ears.

“We are not born empty. We come into the world with emotional, historical [and] cultural baggage [and] sounds, whether we took them from our old lives or from our mother’s womb,” he says. “This is how I see it from a sampling perspective. They are in me and I take them with me on my travels in time.”

Bassene sees Neo Dakar Vol 1 as the first in an ongoing series of mixtapes. “I chose the name … because I am very sensitive to the idea of art movements,” he says. “For me, it resonates with the idea of doing things together with a collective consciousness, like the post-independence Senegalese art collective Agit’art, L’École de Dakar.”

The mixtapes are created communally and function as a parallel output to Bassene’s solo albums, while he sees the potential for the mixtapes to explore other African cities and their scenes. The idea to present his new offering as a mixtape came from his background in hip-hop, which predates the character Ibaaku.

Bassene, a young hip-hop dancer, began writing rap in the mid 1990s and was taken under the wing of Senegalese Afro-fusion group Waflash just as Senegalese hip-hop was booming. Bassene was a rapper in Senegal’s first pan-African hip-hop collective Lyrikal Zone 3 by 2001 and would go on to work with some of Senegal’s best hip-hop talent.

Looking back on these days, Bassene explains how those roots have fed into Ibaaku’s new mixtape. “In the 1990s my dad used to bring me tapes from the New York underground DJs like Ron G and DJ Clue,” he says. “I wanted to keep that spontaneous and raw spirit of bootlegs [and] remixes to encapsulate some unreleased tracks … I’ve been sitting on.”

The older songs on Neo Dakar Vol 1 sit side by side with newer compositions that Bassene says reflect his “current mood”, which allows the mixtape to explore different moments in his musical life. This works to collapse the boundaries around time in a world where past, present and future are always in a state of fluidity. DM/ML