A Sticky Story: The journey of mebos 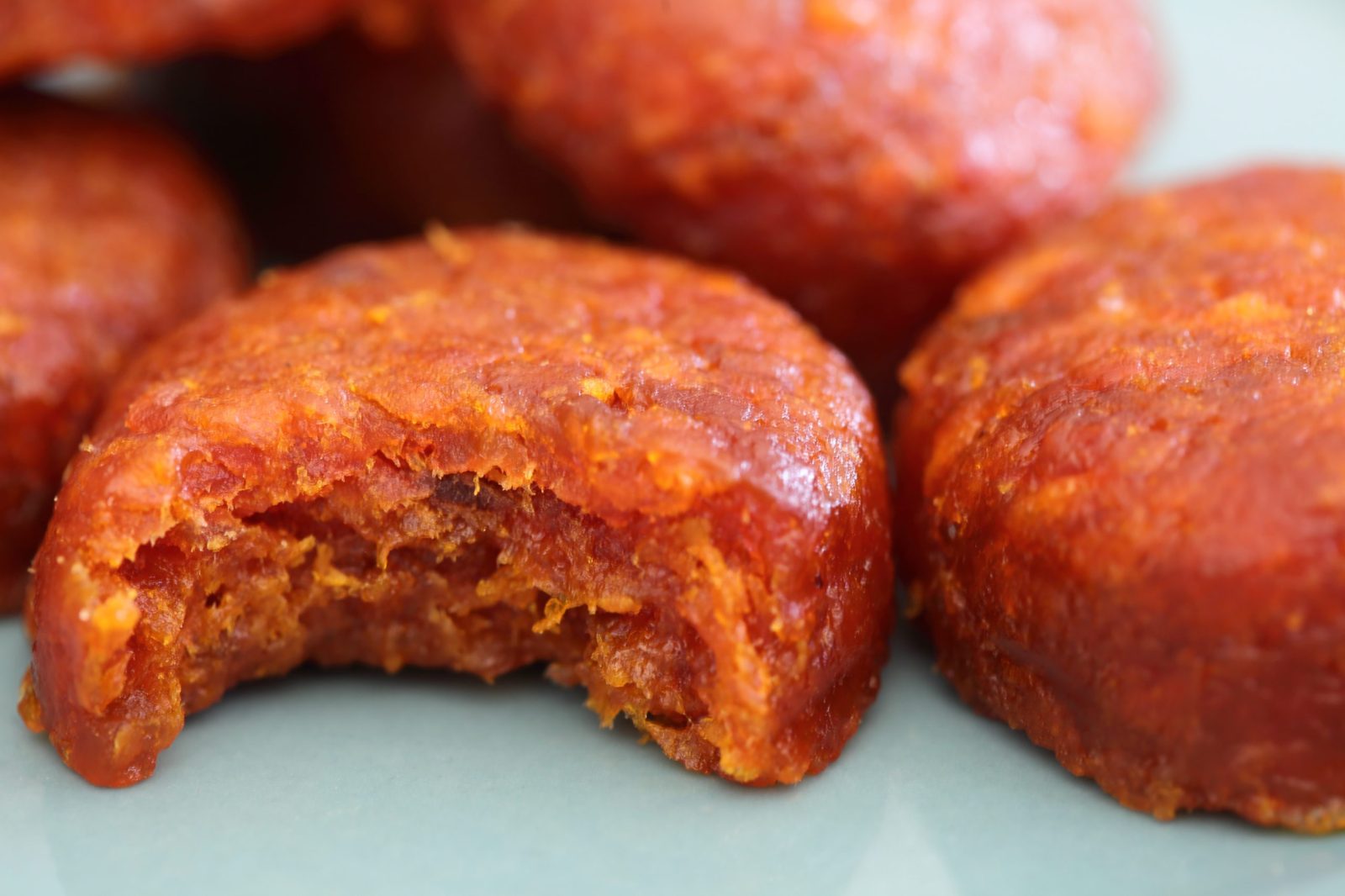 Sweetly salty and sour at the same time, mebos is a love it or hate it comestible.

The author supports Yeoville Meals on Wheels who distribute food parcels to the elderly and needy.

Close your eyes and imagine the definitive taste of Cape cuisine. Perhaps the creamy comfort of umngqusho comes to mind. Maybe it’s a coconut rolled koesister or snoek braais on the beach. For me, sweet-sour-salty cylindrical slabs of dried apricot mebos induce regionally specific drooling delight.

Not everyone agrees. More than Marmite, mebos is a love it or hate it comestible. For some the robust, layered flavour profile of the brined then sun dried and sugared apricot is deeply disconcerting. Others argue that sensory confusion is precisely the point. Either way, mebos offers insight into the South African story.

Fruit has been sun dried at the Cape since time immemorial. Renata Coetzee’s A Feast from Nature describes Khoi-Khoin traditional preservation methods for wild fluweelrosyntjie berries (Grewia flava) suurvy (Carpobrotus acinaciformis), t’samma (Citrulus lanatus) and !Nara melon (Acanthosicyos horridus) which were: “Cut into pieces and cooked without water until they melted down into a thick syrup. The syrup was then spread on a flat rock to dry in the sun for a few days after which it was sliced into sections and eaten as dried fruit roll would be.”

Adding salt to sun dried fruit came with colonial conquest. Of all the trees that grew in the Dutch East India Company’s gardens, apricots were amongst the most productive but they also had the shortest fresh shelf life. They were generally preserved either in brandy or salt which Louis Leipoldt attributed to: “The limited access to imported sugar which was an exceedingly scarce and expensive article, whose use became general only in the 18th century.”

The flavour of salt preserved stone fruit was already familiar to many of those at the Cape colony. Prunus mume is known in Japanese as “ume” and is often translated into English as “Asian plum” but is actually more closely related to an apricot. For thousands of years the Japanese have prized the medicinal and culinary properties of brined, fermented, sun-dried ume (known as umeboshi). Not only are they traditionally consumed as a condiment, infused into teas and distilled into startlingly strong spirits but samurai warriors also carried umeboshigan (umeboshi balls) – made by kneading the flesh of salted umeboshi, rice flour and sugar – into battle in order to counter fatigue, dehydration nausea and hangovers. Seeking umeboshi in South Africa? Order online from Tabu Food.

In the 16th and 17th centuries, there were sizable, culturally, politically and economically influential Nihonmachi expatriate Japanese communities in all the major Southeast Asian port cities – including those controlled by the Dutch East India Company. Top and tail the word “umeboshi” and “mebos” appears. It seems likely that the core tastes and methods for making mebos came to the Cape with enslaved South East Asian people. The South African offering has evolved over time and space – ume have given way to local apricot varieties, the brining period has been reduced (so lacto-fermentation falls away) and the ratio of sweet to savoury has changed – but the stubborn persistence of this Asian ingredient in an African epicurean environment is testimony to the role of recipes in resistance and resilience amidst oppression. Each sweet-salty mouthful of mebos asserts the identity of a community with history, culture and an indestructible sense of self.

The earliest Cape references to mebos are medical but by the mid-19th century it had been reclassified as a taste treat. During her 1862 visit Lady Duff Gordon (who according to Leipoldt: “Found little to praise in Cape cuisine”) waxed lyrical about buying: “Some ‘confyt’; apricots salted and then sugared, called ‘mebos’ – delicious!” In Olive Schreiner’s Story of an African Farm (1883) Sampson is sent by his mother to: “Go and buy sixpence of meiboss (sic) from the Malay round the corner.” The Cape’s crossover creole cuisine was carried out of the region and into the proto-Afrikaner epicurean identity with Voortrekkers. By the late 19th, early 20th century mebos was being invoked in nostalgic Boer War folk songs (“…Tante Mina kook, o sy kook die mebos stroop, Uit die bai’lekker app’kose daar op die grond”).

Less lovely liquid innovation can be inhaled by way of Nimbus Juices mebos flavoured vape fluid. The vape juice is unpleasant but not nearly as distasteful as the 1982 South African Defence Force Operation Mebos attack on SWAPO bases in Southern Angola. Naming a border war battle after a salty-sweet confectionery is unsavoury but not surprising. Our bodies need sugar and salt but in excess both can kill us. A pinch of salt with some sweetness heightens flavour in the most wonderful ways but too much can be stomach churningly terrible. Every bite of mebos exists on an edge, travelling with samurai and through slavery. Each flavour is ferociously amplified and intense with suffering and survival. Whether that makes mebos deliciously redemptive or disconcertingly disgusting is a matter of personal taste. DM/TGIFood