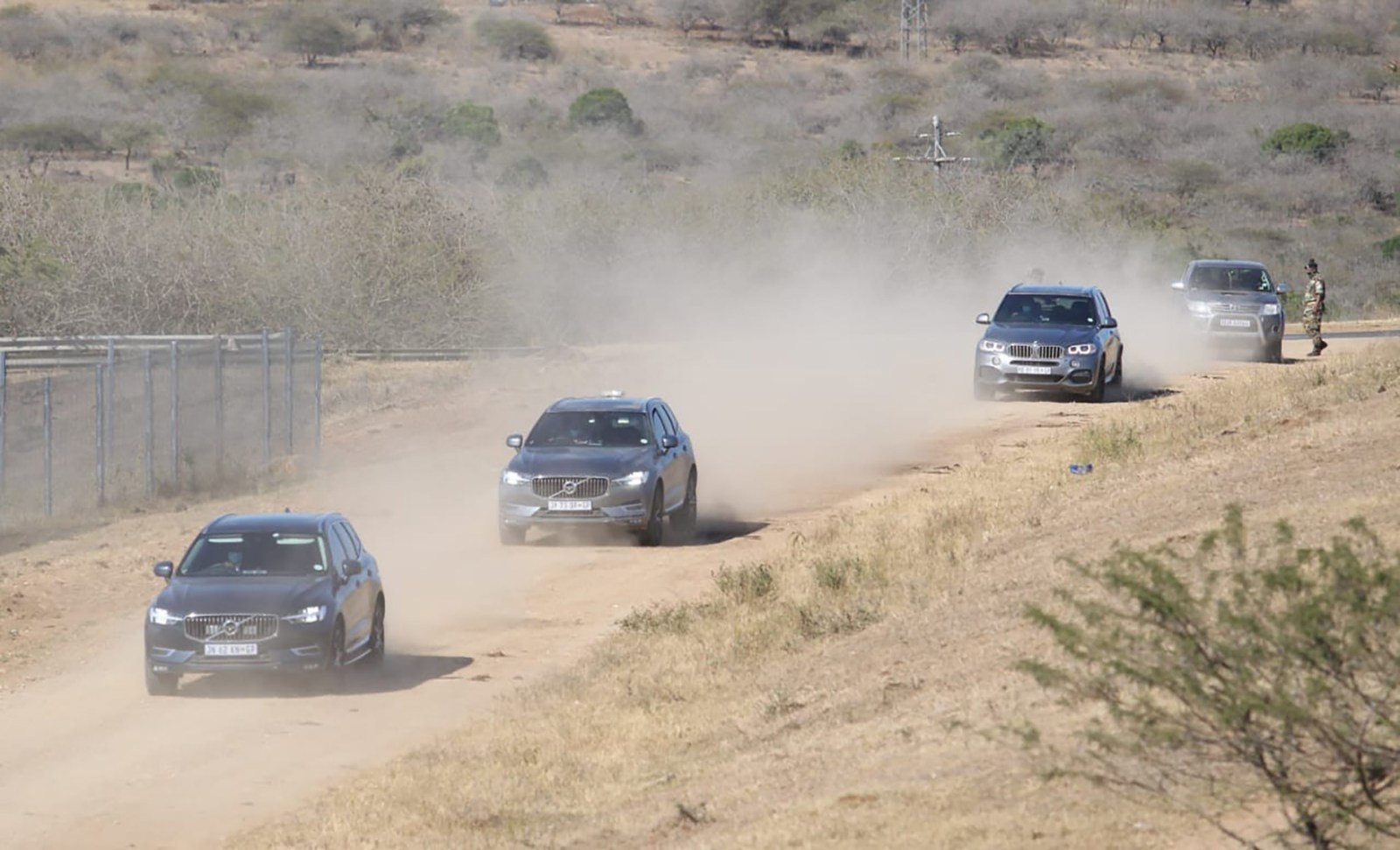 The convoy of imprisoned former president Jacob Zuma arrives at his homestead in Nkandla as he has been permitted to attend the funeral of his late brother Michael Zuma who passed away last week. (Photo: supplied)

Jacob Zuma, who is serving a 15-month sentence at Estcourt Correctional Centre, travelled home to Nkandla after being granted compassionate leave to attend his younger brother’s funeral.

Wearing a navy blue suit and tie and under armed guard, former president Jacob Zuma was escorted about 200 kilometres from his prison cell in Estcourt Correctional Centre to Nkandla on Thursday morning to attend his brother’s funeral.

Heavy police and army presence was reported around Nkandla ahead of the funeral.

As with any prisoner when outside a correctional facility, the former president was not required to wear prison fatigues, said the Department of Correctional Services’ statement.

Zuma was sentenced to 15 months imprisonment for defying a Constitutional Court order to appear before the Zondo Commission of inquiry into State Capture.

On 8 July, Zuma handed himself over to police, despite his supporters, including his son, Edward, arguing he needn’t comply “because he’s done nothing wrong”.

Prior to the approval of Zuma’s application to attend the funeral, Congress of the People (Cope) issued a statement urging the Department of Correctional Services to be “cautious”.

In granting Zuma compassionate leave, Cope said they were concerned about “a situation where the supporters of Zuma refuse to let him go back to prison”.

“Will the security forces be up to the task to get him back to prison without spilling blood?” queried Cope’s statement.

“We’re a humane society and there’s nothing untoward with allowing Zuma to attend the funeral,” said Lawson Naidoo, Executive Secretary of the Council for the Advancement of the South African Constitution. Providing security agencies can ensure the funeral doesn’t breach Covid-19 regulations and ensures Zuma’s safety, then all protocols should be in order, added Naidoo.

The Jacob Zuma Foundation tweeted that media would not be allowed in the precinct of the funeral service, including the place of burial. “The Zuma Family wants to mourn and lay to rest their loved one in privacy,” read the tweet.

South Africa is currently under adjusted Level 4, meaning only a maximum of 50 people may attend a funeral at any one time.

The Mail & Guardian reported that the timing of the funeral would not be publicised so as to avoid a mass gathering of supporters.

In the days leading up to Zuma’s imprisonment, his home in Nkandla was surrounded by groups of supporters.

Following Zuma’s arrest, violent protests and looting ensued in parts of KwaZulu-Natal (KZN) and Gauteng. President Cyril Ramaphosa has branded the unrest — lasting more than a week — as an “attempted insurrection”.

The violence and looting that gripped KZN — Zuma’s home province — and Gauteng left at least 234 people dead. At the time of writing, 3,407 people have been arrested for their involvement in last week’s violence, including former Ukhozi FM presenter Ngizwe Mchunu.

ANC members in KwaZulu-Natal have continued to be divided over Zuma’s imprisonment. The party’s provincial secretary Mdumiseni Ntuli has described Ramaphosa’s “failed insurrection” statement as an “exaggeration”. Meanwhile, eThekwini mayor Mxolisi Kaunda has refused to take down his social media posts calling for Zuma’s release.

But the ANC in KwaZulu-Natal has distanced itself from marches calling for Zuma’s release, planned for 22 July. Despite the ANC’s logo adorning posters advertising the marches, the party’s provincial spokesperson, Nhlakanipho Ntombela, said the marches were organised by individuals and not the provincial structure.