ANC calls off NEC meet in weekend of trepidation over Zuma 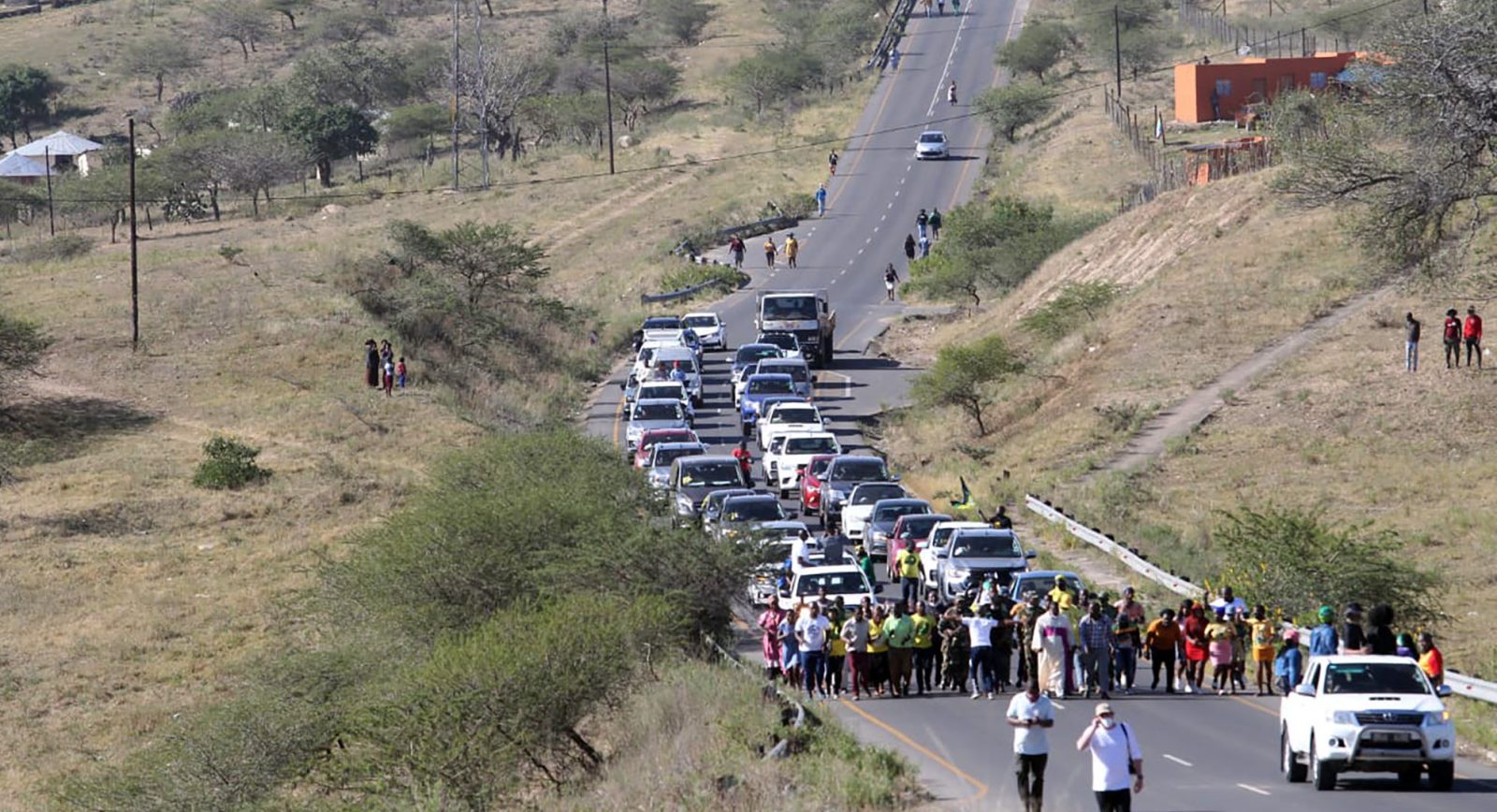 Despite reports that Jacob Zuma is seeking a way to challenge a ruling made by the Constitutional Court, little had changed outside his Nkandla homestead by Friday afternoon. Amid trepidation surrounding the former president ahead of him starting his 15-month jail, term, it was also confirmed that the ANC’s weekend NEC meeting had been abruptly postponed.

The odd police van was patrolling, locals were ambling, and a few so-called Umkhonto weSizwe Military Veterans Association (MKMVA) members were on their beat outside the former president’s residence. Some supporters, dressed in ANC regalia, were sitting in their cars, ostensibly waiting for their peers.

Just before 2pm, a small contingent of supporters from Mpumalanga arrived. Others are expected throughout the afternoon.

The spokesperson for Zuma’s eponymous foundation, Mzwanele Manyi, confirmed earlier in the day that Zuma would be “addressing the nation” over the weekend. The (disbanded) MKMVA also announced that it would be holding a press briefing outside the homestead at 4pm.

The provincial ANC has been circumspect on the apex court’s ruling, saying that it would be discussed at this weekend’s national executive committee (NEC) meeting. However, on Friday afternoon, ANC deputy secretary-general Jessie Duarte released a notice saying that the meeting had been postponed.

“In arriving at this decision the national officials were mindful of the situation developing in KwaZulu-Natal and the need for ANC to give clear and principled leadership to ensure the maintenance of the rule of law and to avoid any violence, injury, or loss of life,” said Duarte.

She said that NEC members would be deployed to KZN “and will work with the provincial leadership in this regard”.

A date for the NEC meeting would be communicated later.

Zuma, as a former president and ex-officio member, had been participating in the party’s NEC meetings, even while he was facing serious criminal charges. There was talk of him attending this meeting too, even with the imprisonment order hanging over his head., reports Carien du Plessis. The ANC at its national conference in 2017 resolved that leaders facing serious criminal charges should step aside, and it has recently suspended its secretary-general, Ace Magashule, for failing to do so while he is facing corruption charges

Prior to the news of the meeting being postponed, ANC KZN spokesperson Nhlakanipho Ntombela, had told Daily Maverick: “I am not aware of any interaction with [Zuma] by the leadership at this stage to [encourage him to hand himself over to police].

“We have always emphasised to him that he is a former president who took an oath of office. By that oath of office, he had to ensure that he protects the constitution and the organs of the state.

“The Constitutional Court is the final arbiter on the matter”, and Zuma should comply with all of its rulings, Ntombela said.

Things had been characteristically slow in Nkandla until Thursday, when a convoy of about 30 cars carrying Zuma supporters snaked its way through the area, some drivers periodically stopping to fire gunshots into the air, to which police did not immediately respond.

The motorcade was just what was needed to add a touch of intrigue to the visuals captured by journalists camped outside the homestead in the nasty winter sun.

The trepidation surrounding the former president’s arrest has been palpable on social and legacy media platforms, but the “Nkandlageddon” promised by Zuma cultists had not manifested at the time of writing.

The reason for the convoy,  according to Ntando Khuzwayo – axed eThekwini mayor Zandile Gumede’s spokesperson – was to show support for Zuma, who was sentenced on Tuesday to 15 months’ direct imprisonment for contempt by the apex court for failing to obey its order that he appear before the Zondo Commission.

According to the warrant of committal, Zuma will serve his sentence at Durban’s Westville Correctional Facility, situated near to the popular Pavilion Shopping Centre.

“We just wanted to show solidarity [with Zuma] so that he knows that we still believe he shouldn’t go to prison,” said Khuzwayo.

The convoy arrived at the homestead, its drivers and passengers mulled about, and then left.

“He shouldn’t be sent to prison at his age for a number of reasons. He is going to Cuba, he is going to Russia for his medical condition, and if he is sent to jail, that [medical condition] won’t be attended to, because once you are under correctional care, you are subjected to use their doctors,” said Khuzwayo.

Zuma’s age – 79 – and health, and the “fact” that he has “done nothing wrong” have been offered by supporters as reasons why he should not serve a sentence.

Khuzwayo told Daily Maverick that the supporters were intending to “shut down” the Durban CBD on Friday. “We will meet at City Hall.”

He could not give Daily Maverick an indication of how many supporters were expected or if there would be speakers punting Zuma’s plight.

By 9am on Friday, the time of the intended shutdown, City Hall remained quiet, with no protesters in sight. Close to 1pm, about 50 supporters had managed to bring traffic to a standstill in the CBD.

Zuma’s eldest son, Edward, told Daily Maverick much the same as he has told all media: The family had not arranged for the motorcade, any marches, or the “MK” members that had been camped near the homestead for months.

Edward made it clear that he did not speak on behalf of the Zuma family, but in his personal capacity.

Zuma is sure not to disappoint when pumpkin hour arrives. He has to hand himself over to Nkandla police by Sunday. Failing this, SAPS will have three days to make an arrest.

Either way, the former president will have a thrilling platform to punt the relentless “persecution” he is enduring.

Edward is adamant his father does not have to hand himself over because “he has done nothing wrong”. Zuma had been “exercising his constitutional right” to not appear before the Zondo Commission, said Edward, and anyway, there was a review application pending regarding Zondo recusing himself from the commission.

“Why should we have confidence in our judiciary if they are able to overlook such a small thing? How then do you expect us to respect the judiciary?” he asked.

“If ever they want to take President Zuma to jail, then blood will be spilt over, that I can say.” DM

Note: This is a developing story and will be updated.