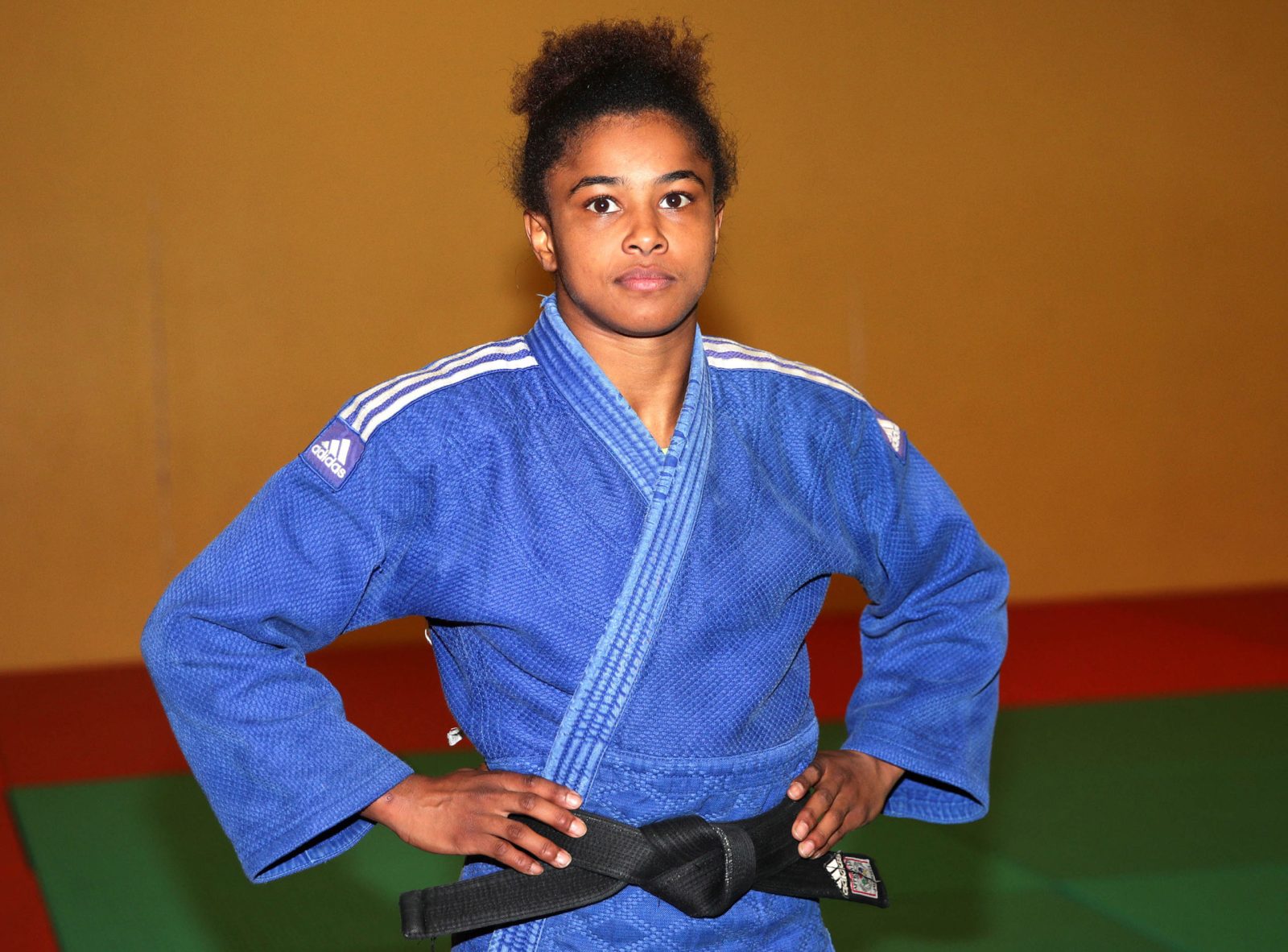 Team SA Judo player Michaela Whitebooi’s participation in Tokyo is a triumph in itself. If she progresses past the first round it would be a magnificent achievement for the 25-year-old.

Michaela Whitebooi’s face lights up when she talks about fighting. “Ooh, I love it! I love the training, putting the body through the extremes. Getting ready to fight. The body hurts, it really hurts. Judo’s a tough sport. And yes, I’ve often thought about how I would do in the UFC. I love watching it. The violence, the pain. The thing is you have to inflict the pain, not be on the receiving end.”

Then she throws back her head and laughs. Her cherubic face belies the toughness that lies within.

She walks around in her sandals not even 1.60m tall and weighs 50kg, before sweating off the excess to get down to her division’s 48kg fighting weight.

She’s a black belt, “actually a first dan, but you can say black belt,” and is South Africa’s top-ranked judo player, the only one competing at the Tokyo 2020 Olympics. She’s also Africa’s only competitor in the women’s 48kg division.

Whitebooi will be one of the first Team SA Olympians to know her fate at these Games. “Yes, by Saturday night my first Olympics will be over. The whole 48kg division is done and dusted in a day.”

Dream could only last a minute

In theory, her debut Olympics could be over in less than a minute, or it could extend into the next match, or two. Any talk of winning a medal is just that, talk, but that doesn’t mean the 25-year-old is here to make up the numbers.

Reality is reality though: she is ranked 41st in the world.

“Look, I will be very, very, very happy if she wins one fight and makes the last 16 here,” says her vastly experienced coach, former Bulgarian Olympian Nikola Filipov. “And for her to win two fights would be the highlight of my career.”

He himself competed at the 1992 Barcelona Games before becoming national Bulgarian coach in 1995. He arrived in South Africa in 2000 and has been in Pretoria for the last 17 years.

This will be Filipov’s fourth Olympics with Team SA, starting in Beijing 2008, while it’s his first with Whitebooi, who he has been coaching for 11 years.

Whitebooi hails from Gqeberha (formerly Port Elizabeth) but now calls Pretoria home, where she is enrolled at Tuks. She is used to pain and hardship and has spent more than half her life without a father. It has been her mom, Minnie, who was employed as a domestic worker and who kept things together when they could so easily have fallen apart.

“My dad passed away some 14 years ago … I don’t know the exact circumstances, but it was something with his heart. My mom had to take on the roles of both parents. It was a challenge for her and it still is. Although I live in Pretoria we are still very close,” she said.

“If it were not for judo, I would probably have dropped out of school as a lot of my friends did. Where I grew up gangsterism and drugs are rife. So, who knows how my life would have played out? I love judo but with this love comes a great responsibility to work hard. For me, judo has always been a means to make something of my life, and through it, I got the opportunity to study and get a degree.”

In 2018 Whitebooi obtained her BComm Financial Science degree and a year later she completed her Honours in internal auditing. Last year the Covid-19 pandemic lockdown stalled her studying but this year she enrolled in a one-year postgraduate course in entrepreneurship at Tuks.

Peace on the mat

Still, she’s happiest when she’s on the judo mat, whether it’s training or in competition combat itself.

Even though a fight is four minutes long — longer if scores are level and it goes to a Golden Score — Whitebooi says it feels a lot longer.

“The first two minutes are usually OK, but then it gets really tough,” she said. “Those four minutes feel like 20 minutes, they’re painful and so sapping and more anaerobic than aerobic. The lactic acid makes your muscles tense up as if in spasm. The cramps have to be attended to by muscle massaging and ice packs.”

What she doesn’t mention is that about 30 minutes later her next fight is called. The cycle of pain starts again.

“You have to consider that Michaela is Africa’s only qualified judo player in the women’s 48kg category,” reminds Filipov. “They get here (in Tokyo) with 32 players, having started from over 500 entrants in the qualification cycle following Rio 2016.

“The fact that she’s here, essentially the top 32 in the world, is an incredible achievement. And she’s still just 25. In three years, at the Paris Games, she will be at her physical peak aged 28. I honestly expect her to win a medal at Paris 2024.

“You have to know the background. She was badly affected by the Covid lockdown, let alone the lingering effects of Covid itself. We were still in lockdown when the rest of the world was ‘unlocked’.

“They were training and competing while we were still in lockdown. We spent many months training on my back lawn because everything was closed. And then we couldn’t compete, and still had to train with a mask on.

That is not a slur on Whitebooi’s ability, but more a reflection on the past year’s effect of the pandemic, as well as the difficulties judo players face in South Africa. Other countries, especially Japan, France, Germany, Russia, Uzbekistan, Korea and China have funding programmes that make their players professionals.

Whitebooi is tough and smart though. She’s not one for making excuses. However, she had finished off 2019 on a high after winning the silver medal at the Africa Games and then following up with gold medals at the two African Opens in Senegal and Cameroon, and then gold at the African Championship in Madagascar.

Then, 2020 “happened”. Now we’re into 2021 and the hardships continued. At a training camp in Georgia in April, she contracted Covid-19 and missed out on vital competitions in Georgia and Turkey.

Covid has affected her and she recalls being quite ill at the time and probably “isn’t 100% recovered”. Her chest tends to tighten up under extreme circumstances which affect her breathing, but she’s healthy and strong enough to fight at this level.

She was advised by a doctor to not take the Covid-19 vaccine when it was offered to Team SA’s Olympians. “He said that because I had Covid in April that I should give it about six months before taking the vaccine … that I was only 25 and fit and should adopt a ‘wait-and-see’ attitude.

“I don’t like losing and I can never get used to the feeling. Obviously, I don’t want to lose any fight here in Tokyo, but I also have to be honest and know that I’m the hugest of huge underdogs.

And then Whitebooi again rocks back in her chair and laughs. This time I laugh with her. It’s impossible not to. DM