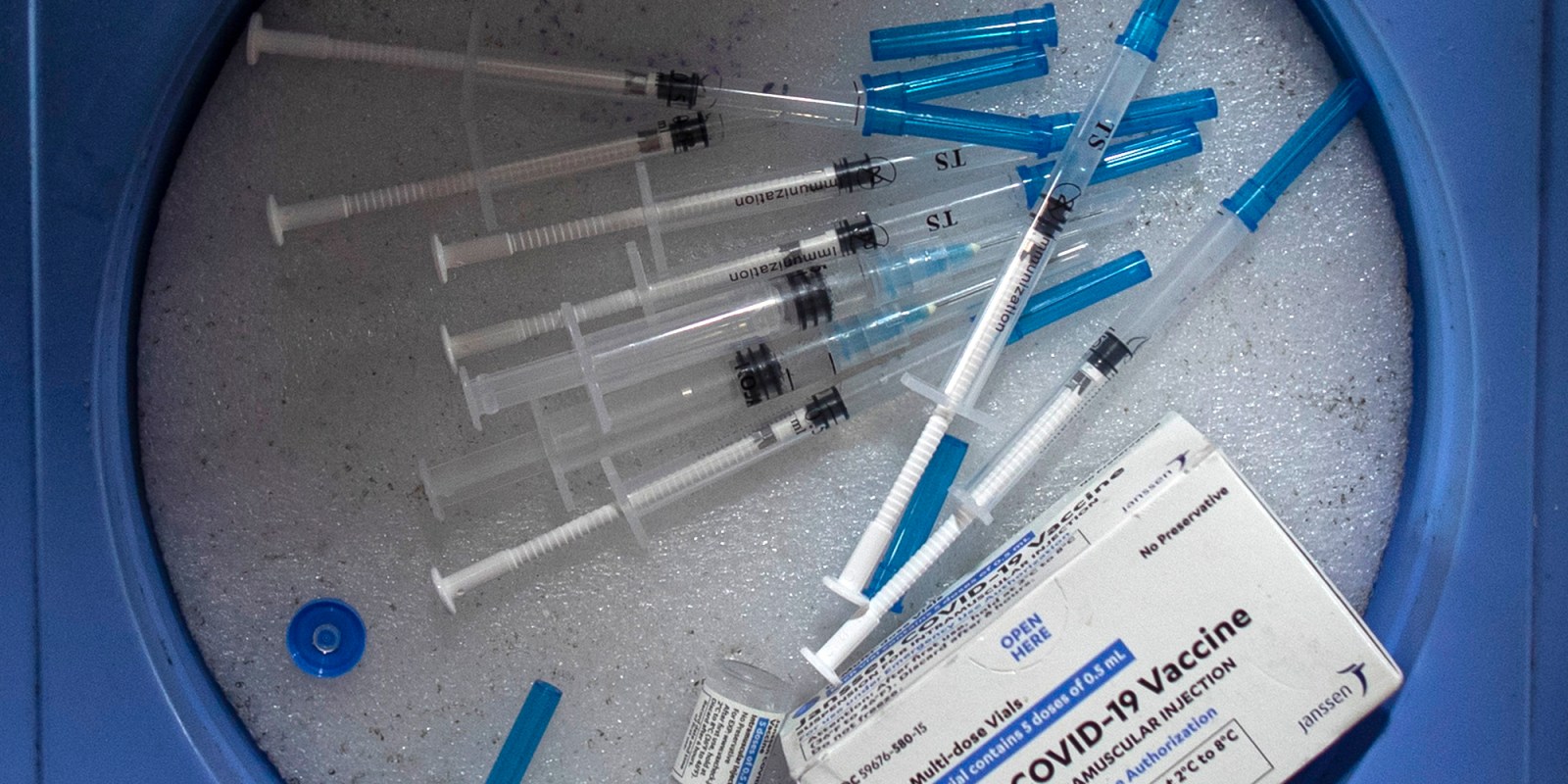 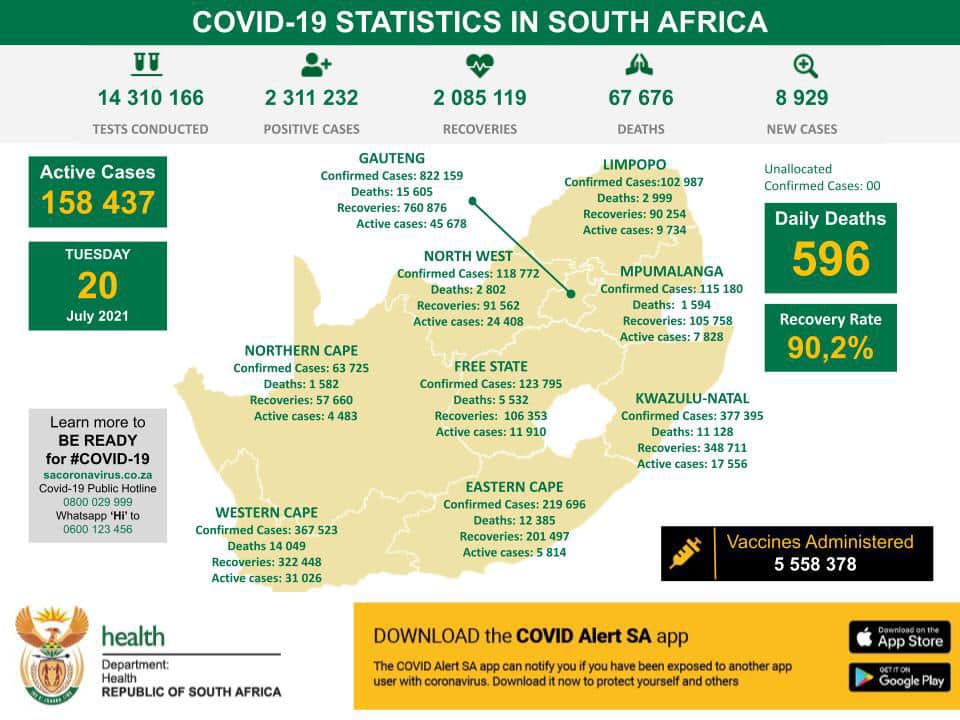 South Korea and Thailand reported record infections. Japan’s top Covid-19 adviser said new cases in Tokyo, where the Olympics start this week, could hit a record in early August. Hong Kong kept most social-distancing measures for the next two weeks.

Johnson & Johnson’s single-dose vaccine produced relatively low levels of antibodies against the Delta variant, according to a study that hasn’t yet been peer reviewed. Delta makes up 83% of all sequenced cases in the U.S., up from 50% in early July, authorities said.

A White House official and a senior spokesperson for House Speaker Nancy Pelosi tested positive for Covid-19. Both had been vaccinated and are among several recently infected U.S. staffers.

Half of Australia in Lockdown

New cases continued to climb in Australia’s two largest cities on Wednesday as strict stay-at-home orders impacting half the nation failed to halt the spread of the delta variant.

The new infections take the nation’s cumulative cases to 439,477, according to the Center for Covid-19 Situation Administration. The country reported 108 fatalities and 8,248 recoveries.

South Korea reported a record 1,784 new cases in the past 24 hours, up from 1,278 the previous day, according to the Korea Disease Control and Prevention Agency’s website.

There were 1,726 local infections, with 599 new cases in Seoul and 450 in Gyeonggi province. About 32% of the population, or 16.4 million people, have received at least one vaccine dose, while 13% are completely vaccinated.

Japan’s top Covid-19 adviser, Shigeru Omi, said in a TV program on Tuesday that Tokyo’s daily coronavirus cases could hit a new record in the first week of August, potentially reaching a figure close to 3,000.

Omi, the head of the government’s Covid advisory panel, said if the current speed of infections continues, the daily caseload could double in two weeks from current levels.

The U.K. Premier League is in talks with clubs over the introduction of compulsory Covid passports for fans from the start of the season, The Times newspaper reported, without saying how it obtained the information.

The league is seeking to preempt any cuts in crowd capacity at sporting events, the newspaper said.

London office workers want an average pay rise of 5,100 pounds ($6,950), equivalent to the cost of some annual railway season tickets, to return to their desks full-time after the pandemic, according to a survey.

The Hong Kong government will maintain most of the social distancing measures for the next two weeks until Aug. 4, according to an official statement.

One Dose of J&J Less Effective Against Delta

A study found Johnson & Johnson’s Covid-19 vaccine is much less effective against the delta and lambda variants than against the original virus, the New York Times reported. The lab-based findings, which haven’t been peer reviewed or published in a scientific journal, suggest the need for a second dose for the 13 million people who have received the inoculation. The authors of the study recommended an mRNA vaccine made by Pfizer Inc.-Biontech SE or Moderna Inc. as the second shot.

The results contrast those from smaller studies published by J&J earlier this month that suggested a single dose of its vaccine is effective against delta even eight months after inoculation, the Times said. Seema Kumar, a J&J spokeswoman, told the newspaper that the new data “do not speak to the full nature of immune protection.”

The new study is credible because the authors don’t have ties to any vaccine makers, John Moore, a virologist at Weill Cornell Medicine in New York, told the Times. He cited several studies in monkeys and people that show that two doses of the J&J vaccine are more effective than just one.

A senior spokesperson for House Speaker Nancy Pelosi and a White House official have tested positive for Covid-19. Both had been fully vaccinated and are among several staffers in Congress and at the White House who’ve been recently infected.

The Pelosi staff member had no contact with the speaker since being exposed, Drew Hammill, a Pelosi spokesperson, said in a statement. White House press secretary Jen Psaki said that contract tracing had determined that the infected staff there had no close contact with senior people or President Joe Biden.

The Delta variant now makes up 83% of all sequenced Covid-19 cases in the U.S., Centers for Disease Control and Prevention Director Rochelle Walensky said in a Senate hearing. The new figure is up from 50% from the week of July 3. She said areas of the country with limited vaccination coverage are allowing spread of the highly transmissible variant, which was first identified in India.

“Each death is tragic and even more heartbreaking when we know that the majority of these deaths can be prevented with a simple, safe, available vaccine,” Walensky said.

New York City’s vaccine administration rate has plunged to less than 15,000 a day, from more than 100,000 a day in mid-April, as cases increase.

The city reported a seven-day average of 576 confirmed and probable cases on July 18, more than double the average on July 6.

Cases of Covid-19 are increasing in NYC. Currently, hospitalizations are almost entirely of people who have not been vaccinated. This is preventable suffering.

The Netherlands reported 69,731 weekly cases on Tuesday, up from 51,957 last week. The number of hospitalizations has gone up in recent days, though at a slower pace than infections. Official figures showed 50 new admissions on Monday, the biggest daily increase since May 10.

The Dutch government has reintroduced some restrictions, including limiting opening hours for bars, while a recommendation for people to work from home if possible was reinstated from Monday.

Indonesia may start to gradually ease nationwide emergency curbs if cases and levels of hospital occupancy decline. The government may relax the restrictions starting July 26 if cases continue to fall, according to President Joko Widodo. This will include allowing some eateries and shops to stay open for longer, Jokowi, as the president is known, said in a televised address on Tuesday. DM