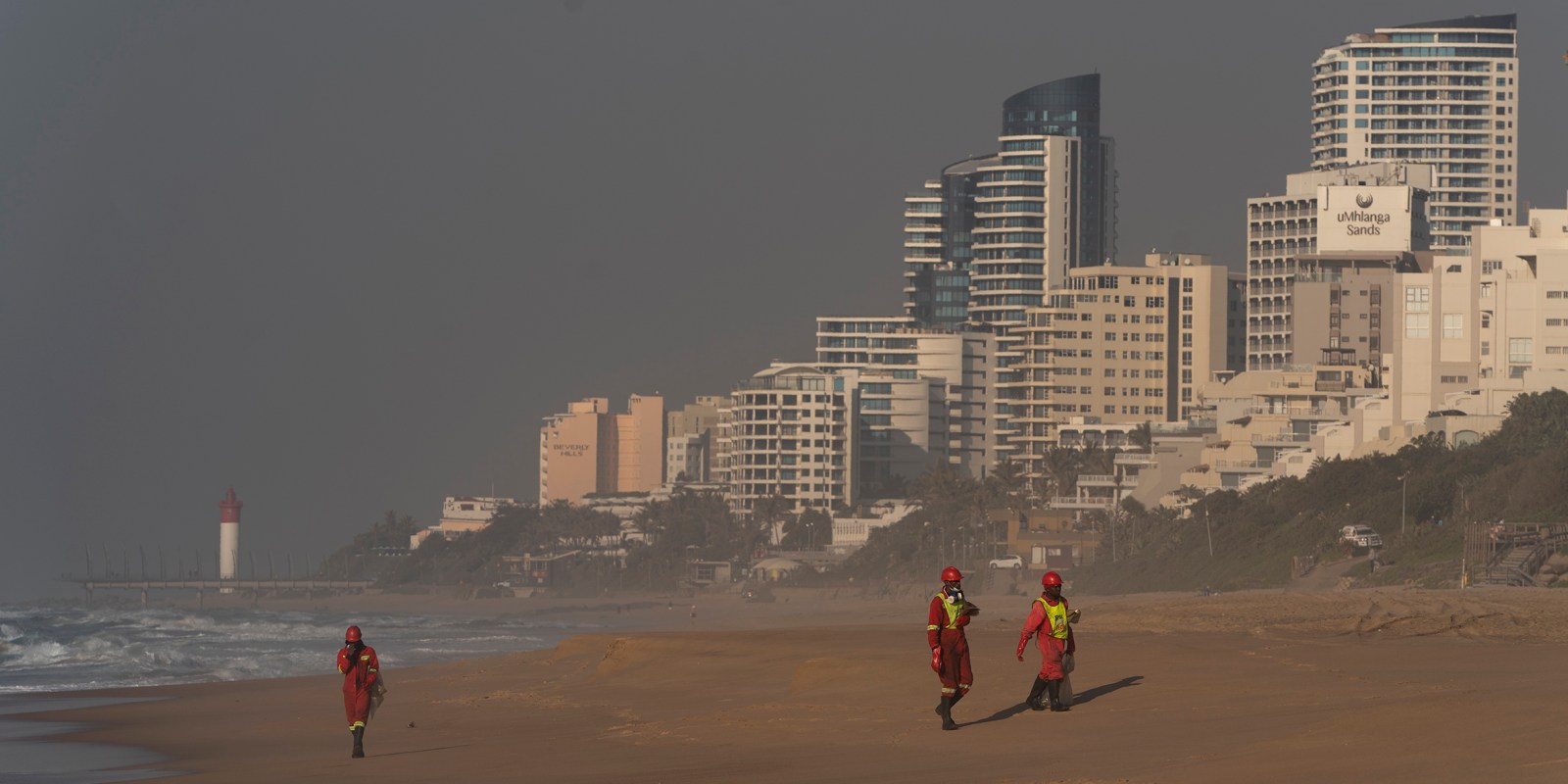 Chemical clean-up workers comb a beach in Umhlanga, north of Durban, for dead fish, with the lighthouse and pier in the background. (Photo: Shiraaz Mohamed)

The Indian multinational pesticide company United Phosphorus Limited has belatedly advised people to double down on health and safety precautions in the wake of the arson attack and massive fire at a chemicals warehouse at Cornubia, north of Durban.

Instead of wearing a normal face mask and spectacles to cover their noses and eyes, United Phosphorus Limited (UPL) has advised neighbouring residents exposed to toxic fumes from the still smouldering pesticide warehouse to consider wearing two damp surgical masks over their mouths and noses.

Arsonists and looters set fire to the massive warehouse amid recent unrest in parts of KwaZulu-Natal.

Very young children and people with asthma should also “avoid being in the immediate surroundings” of the warehouse, while residents with any health concerns were advised to seek medical advice.

The company has suggested that the smouldering remains of toxic chemical storage drums might finally be doused over the course of Wednesday, 21 July. Fire and emergency officials previously indicated that extinguishing the heat completely will depend on the rapid clearance of massive volumes of metal, bricks and concrete rubble destroyed by a fireball explosion.

The National Health Department has not responded to queries on whether it has taken any action to monitor and assess, independently, the health risks to surrounding communities in the wake of the arson attack on the UPL facility, which only opened its doors four months ago.

However, local civil society groups have also issued an “urgent but unofficial public health warning” cautioning people in the vicinity to stay indoors and to consider moving vulnerable people out of the area for the next few days.

“As far as is possible, stay indoors as much as you can, with windows closed, particularly if your home is in the direction of the chemical plume. If you, your child, or elderly people with chronic chest and heart disease live in the area of the smoke, and it is at all possible to stay with relatives outside the area for the next few days, then it is advisable to do so,” according to a press statement signed by among others, Prof Rajen Naidoo, head of Occupational and Environmental Health at the University of KwaZulu-Natal.

Environmental epidemiologist Rico Euripidou has also raised concerns about the poor and belated communication of potential health risks to affected communities, noting that several of the pesticides marketed by UPL’s South African division are banned in the European Union because of known serious health risks to people, animals and the environment.

Euripidou, who is also a health campaigner for the groundWork environmental justice group, has criticised the national departments of health and environmental affairs for their apparent failure to communicate what steps they may have taken to monitor and assess health and ecological risks and to address the growing public concern about the toxic inferno.

A complete list of the volume and types of pesticides and other poisonous products that were set on fire has yet to be disclosed publicly as this might “create unnecessary anxiety”, the company suggested earlier this week.

But in a statement on Monday — almost seven days after the fire began — UPL disclosed a limited number of the chemicals and said it has contacted South African pesticide and poison consultant Dr Gerhard Verdoorn to advise it on the potential health risks.

Verdoorn is an industry consultant to the CropLife pesticide lobby group and director of the Griffon Poison Information Centre.

Mumbai-based UPL said it had provided Verdoorn with a list of the “crop solution products” stored in the warehouse and asked him to provide guidance on possible health implications posed by the release of these products into the environment.

The company said that “communities in the vicinity of the Cornubia warehouse fire have been understandably anxious to receive more information on the ongoing remediation efforts and the containment” of the poisons that may have been released into the environment after the blaze.

“The fire has been doused, but debris continues to smoulder, and parts of the structure have had to be demolished to allow firefighters to safely douse these remaining areas. It is expected that this should be completed by Wednesday 21 July 2021.”

UPL said in Verdoorn’s view “there is a minimal risk of any long-term effects to the health of people exposed to smoke from the warehouse”.

“However, exposure in the short term to some of the chemicals

in the crop solution products may result in dermal as well as eye and respiratory irritation. The situation is being closely monitored and to date, no cases of acute human toxicity have been reported.

“It needs to be emphasised that a number of the products were bio-stimulants and foliar feeds which are water-based, with micronutrients and some biological beneficial organisms, and do not represent a health concern.”

While the warehouse had also contained fungicides and herbicides, it believed most of these were “probably destroyed by the extreme heat of the fire and in most cases can be expected to have burned out into the atmosphere”.

Euripidou, however, has raised concerns around whether this heat may also have generated more toxic airborne chemical cocktails, such as dioxins and furans which have been linked to severe human health problems.

In the absence of full disclosure by the company and authorities, Euripidou said the public could only speculate about the true risks or the need for further precautions by government agencies.

“Where are the notices on the beaches, warning people not to collect fish? Where are the messages on radio stations, especially for poorer communities who do not have access to the internet if there is a need for them to leave their areas because of poisonous plumes of air?

Rory Macpherson, the local councillor for Mount Edgecombe/Umhlanga who visited the beach near the Ohlanga River mouth on Tuesday morning (20 July) said there were still no signs at the scene to warn people against eating poisoned and dead fish, mussels and other marine life.

“This estuary is dead, dead, dead … and the sea and coastline have also been poisoned”.

Macpherson also drove to Cornubia on Tuesday and discovered that polluted bright blue water was still flowing out of a broken stormwater drain some distance from the warehouse alongside a stream that leads into the Ohlanga River.

According to UPL, Verdoorn had indicated that some of the herbicides, such as acetochlor, metolachlor, phenoxy carboxylic acids (2,4-D, MCPA and benzoic acids, or dicamba) may not have burnt out completely:

“Two pyrethroids — alpha-cypermethrin and lambda-cyhalothrin — which are dermal, eye and respiratory tract irritants may have been present in the smoke. These chemicals were suspended in the atmosphere and have precipitated since the fire, more noticeably during the late night and early hours of the morning, resulting in an acrid smell.

“Combined with the smoke inhalation, this may cause drying out of the mucous membranes in the nasal tract and some mild bleeding, especially when blowing the nose. It may also cause discomfort in the oesophagus and trachea.

“However as the fire is being doused, the release of these substances into the atmosphere diminishes. This can be expected to dissipate rapidly due to normal air movement and precipitation.

“It is advisable, however, for people with asthmatic conditions and very young infants to avoid the immediate surroundings of the Cornubia warehouse. If residents in the area have health concerns they should seek medical advice.

“As a precaution, residents who are in contact with the smoke cloud are advised to wear double Covid-19-type surgical or soft cotton masks, of which the outer layer is kept slightly moist to trap particles and fumes. Dry noses should be lubricated with nasal tract remedies that are available from pharmacies or pure petroleum gel (not menthol rubs).

“As previously advised, we have experts on site who have contained surface water run-off and are in the process of investigating and controlling groundwater contamination. This is being done in collaboration with the environmental authorities.

“Water and sediment samples are being taken from the beaches that have been closed, as well as the Ohlanga River and uMhlanga lagoon and the public is advised to follow all guidance issued by the authorities in this regard.” DM/OBP