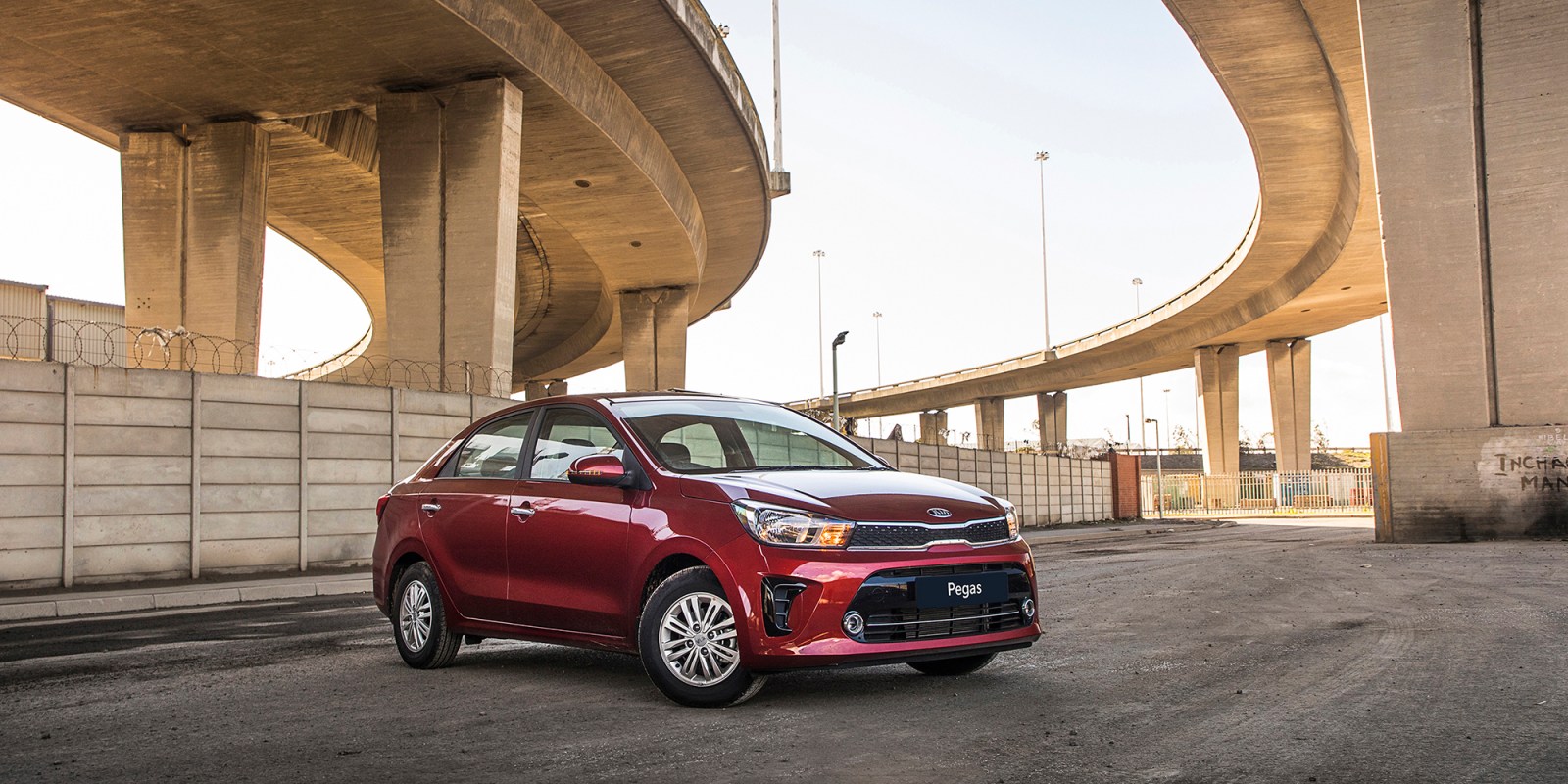 The local budget sedan market has just received a much-needed injection by way of the worthy new Kia Pegas.

It’s not exactly breaking news that SUVs and crossovers have systematically consumed the new passenger car market over the past decade, both locally and globally.

In South Africa, over the last few years, a number of brands have sent their sedans to the car cemetery due to lacklustre sales. Kia ditched its Cerato despite it being the South Korean carmaker’s top seller locally in 2012. There’s also no longer a Kia Rio sedan. Toyota chucked out its budget Etios sedan and the good old Camry, while Nissan disposed of the Sentra and Skyline. The Honda Accord is now a has-been, and Hyundai and VW chased the Elantra and Jetta respectively from the local car coop.

So I was somewhat surprised when I received an invite to the launch of Kia’s new budget sedan, the Pegas. Were they crazy throwing a vehicle into what I assumed was an all but dead segment?

At the media briefing, I was intrigued to hear that the age of the sedan is actually far from over and it in fact accounts for about 15% of the overall passenger car market in South Africa. The new Pegas that I was about to test-drive fits into the A/B budget sedan segment, which gobbles a sizeable 40% of that pie.

Look, to be honest, this is not my favourite segment. I really was averse to the old Toyota Etios and I have never been a fan of the Honda Amaze or the stumpy-nosed Suzuki Dzire. Not only do their lack of power/torque and cheap plasticky bits annoy me, but their rapturous names irk me even more. In my experience neither is “Amaze-ing” or “Dzire-able”.

So I prepared myself for the worst as I approached the parked Kia’s 1.4 EX manual. On first looks I did not run for the hills. The brand’s famous “tiger nose” grille dominates the Pegas’ “face”, which gives it a rather sporty vibe. There are even touches of chrome and 14-inch alloys to up its appeal.

I gingerly opened the driver’s door and peered inside. Phew. No cheap plasticky assault. I touched the steering wheel — hmmm, leather.

The interior looked sturdy and the materials used are of better quality than most of its competitors, which along with the Amaze and Dzire, include the Nissan Almera and Ford Figo sedan.

I did have to search for the electric window switches, which are not on the side doors but rather on the central fascia, but you soon get used to the placement.

Once on the road I was taken aback that the new Pegas has some hi-tech offerings often only seen in the luxury sedan segment — there’s a really good touchscreen infotainment system that’s quick to link to Bluetooth, Android Auto and Apple CarPlay. There’s also a reverse camera, park distance and even cruise control. Safety-wise the Pegas has the basic essentials like dual front airbags, Isofix child-seat anchors, anti-lock brakes (with discs at the rear) and electronic brake-force distribution.

But it was the quality of the drive that surprised me. Look, the Pegas is no Porsche, so you’re not going to get any kind of adrenalin rush while driving it, but the 1.4-litre naturally-aspirated petrol engine does its job. Surprisingly, with only 69kW and 132Nm on tap, the engine offers sufficient oomph to overtake and get to 120km/h on the highway. I found it rather quaint that as soon as you surpass said speed limit there’s a warning chime that alerts you that you are breaking the law.

Overall, I found the drive solid and refreshingly honest. I especially enjoyed the manual gearbox when taking it on a few twisty bends where I found enough torque to power it without having to crazily over-rev the car. I also managed to keep it close to the claimed consumption of  6.1l/100km, so it will be a fairly cheap runaround when it comes to fuel.

Where the Pegas really scores top points is in its boot space. There’s 475 litres of it, which is top of its class. For instance, the Honda Amaze’s boot is 55 litres smaller and the Suzuki Dzire’s boot is even smaller, with 97 litres less capacity. There’s also an option to lower the rear seats in the Pegas to create even more handy space.

Surprisingly, it’s not the Uber/taxi e-hailing market that Kia is targeting, as I initially assumed, but rather first-time family buyers and older customers who are not after a pricey SUV but who are still looking for adequate space inside their vehicles.

In 2017 the Pegas debuted in China, where the sedan segment is still booming, accounting for about 40% of the enormous market — more than eight million new cars have been sold between January and May in China this year.

I must admit I found the name Pegas rather strange. At first I thought it must be Pegasus — and that there might have been a typo on my invite. But Pegas it is. (In some markets it’s called the Soluto or Sephia.) As one of my colleagues suggested, “Couldn’t they have just called it the Rio sedan?”

But, names aside, the Kia’s new affordable budget child is a solid, value-for-money package, which stands out in its segment, thanks to its impressive tech and safety – and of course, that boot. DM

The KIA Pegas vehicles come with a five-year/unlimited-kilometre mechanical warranty and five-year roadside assistance plan, and a four-year/60,000km service plan with service intervals at every 15,000km.