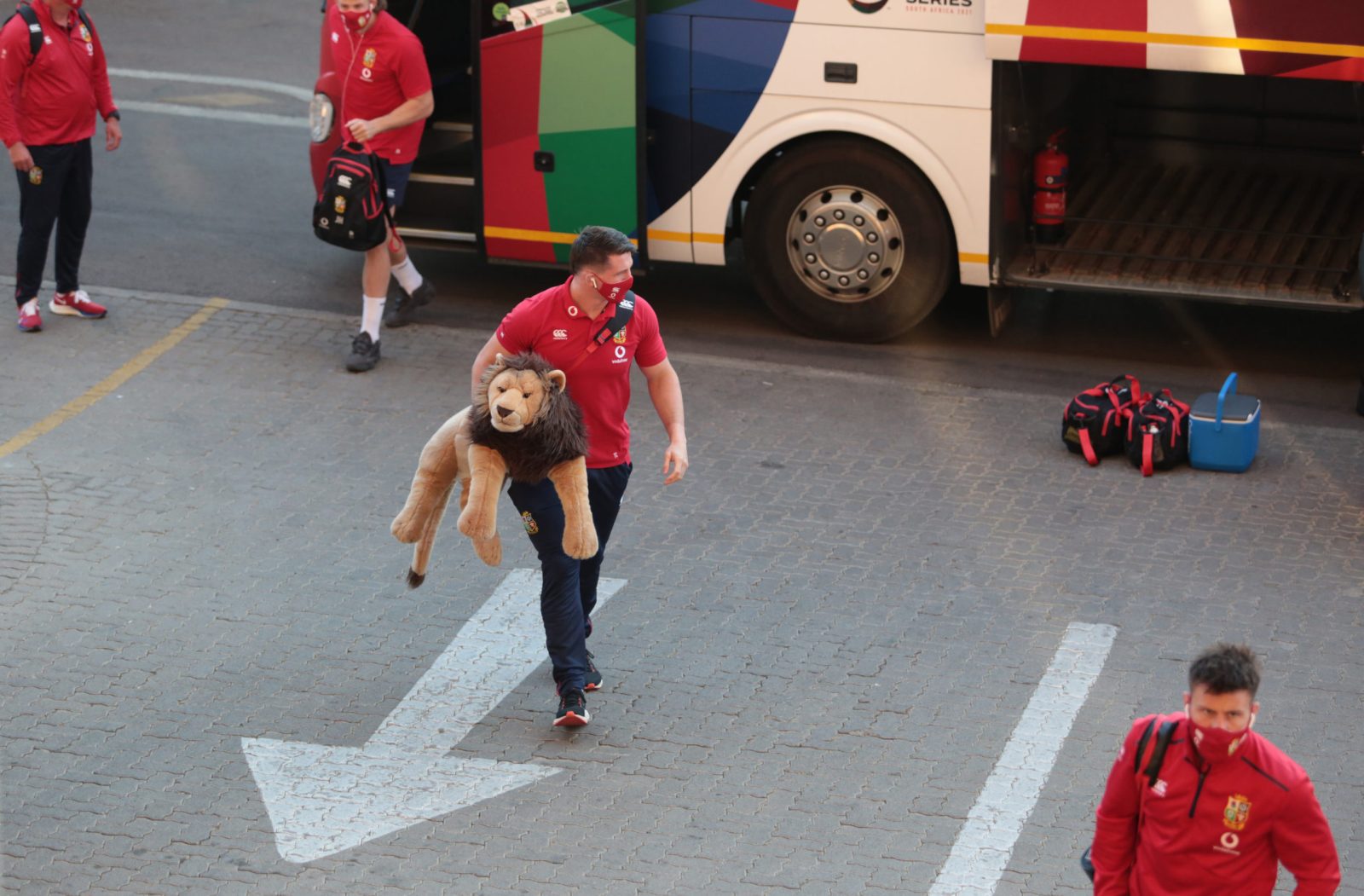 The British & Irish Lions moved from a luxury resort hotel in the Overberg to Cape Town’s southern suburbs after being assured of their safety amid political and social upheaval in other parts of South Africa.

The British & Irish Lions’ already difficult 2021 South African tour hit another snag this week as the visitors monitored the unfolding social unrest in KwaZulu-Natal and Gauteng with growing trepidation.

The arson and looting in KwaZulu-Natal and Gauteng has resulted in deaths and widespread damage to property and livelihoods. The South African National Defence Force has been deployed to assist in quelling the unrest.

The disturbing visuals and reports of violence and death have caused the touring Lions contingent to seriously consider abandoning the tour.

SA Rugby’s hierarchy, along with security officials, met the Lions on Tuesday to reassure the tourists of their safety.

“We have had discussions with the Lions and bulked up their security as a result of what is happening. The Western Cape is probably the safest area we can be in at the moment,” a highly placed source told Daily Maverick.

“But, in my opinion, there is no way this tour is going back to Gauteng now. We have the all-clear for Cape Town and we believe it will be fine. People don’t realise how difficult this tour has been to keep going. We are literally managing it hour by hour.”

The Western Cape government has assured residents of the province that it was prepared for any possible flare-ups.

“The Western Cape Government, SAPS and other security services are working closely together to ensure law and order is maintained in the province,” Premier Alan Winde said in a statement.

“The Western Cape Government, SAPS, the City’s Metro Police, law enforcement officers, traffic officers, as well as other security services are working closely together to ensure that the rule of law is maintained in the Western Cape.

“I want to again reiterate my call to all our residents to remain calm, to reject violence and incitement, and to respect the law. We are busy fighting a deadly third wave of Covid-19 infections while trying to roll out life-saving vaccines. We must make sure we can continue with this important work, so that we save both lives and jobs.”

The Provincial Minister of Community Safety, Albert Fritz, concurred: “I would like to appeal to all our citizens to remain calm at this time. The provincial authorities have everything under control.

“We appeal to you to please respect the rule of law and allow the SAPS and law enforcement agencies to do their jobs. If you have any information that can assist the SAPS, especially information about where public violence will be organised, please pass this on to SAPS directly.”

Rest of tour to move to Cape Town

The Lions are due to play SA ‘A’, the Stormers and the Springboks at the Cape Town Stadium over the next 10 days and then move back to Gauteng for the final two Tests.

The tour was already under pressure to relocate fully to Cape Town before the civil unrest. The surge in Covid-19 cases in Gauteng, which has been the epicentre of the third wave and which has already caused several positive cases in both the Boks and Lions camps, has now guaranteed a switch to the Mother City.

“There is no way the Lions are going back to Gauteng,” was the view of another source.

Given the current political climate, any move back to Gauteng is impossible. In pure rugby terms it takes away the one advantage the Springboks had, which was playing against the tourists at Johannesburg’s high altitude.

The Lions did not respond to requests for comment at the time of publishing, but Lions coach Warren Gatland previously said: “Nothing has been finalised yet but I am pretty sure the second and third Tests will be in Cape Town.”

This tour’s existence has always been one major incident away from collapse, but that fear was initially centred around the Covid-19 crisis. No one could have predicted the massive breakdown of law and order in parts of South Africa over the past days.

It’s entirely understandable that the Lions feel unsafe and insecure, even though they are well cared for by security details and in terms of their lodgings.

They have had the pick of the hotels on the tour. The last three days were spent at the Arabella Hotel and Spa in Kleinmond, a gorgeous, manicured property on the edge of a lagoon with views of the Overberg and distant wheat fields. They have trained at the excellent Hermanus High School.

The Lions have since moved to Newlands, where they will stay at the lovely Vineyard hotel. Not much more could be done in terms of making their bio-bubble stay as comfortable as possible.

But civil unrest and the uncertainty and anxiety it causes are clearly on the minds of the touring party, and understandably so. For now, though, the tour continues and Wednesday’s fourth match against a South Africa ‘A’ side promises to be their toughest examination yet.

SA want to show unity during time of division

The SA ‘A’ team that plays against the Lions is essentially a Boks Test team, with 18 World Cup-winning squad members in the matchday squad.

But after a swathe of Covid infections over the past 10 days, the team has hardly trained, which makes this assignment difficult for the South Africans. They will be prepared in terms of technical analysis, but the players are match-shy.

“We couldn’t do much in six days of quarantine,” SA ‘A’ captain Lukhanyo Am said. “In terms of physical readiness, the most we could do was stretch and basic workouts in the room, but in terms of mental preparation, we did a lot of Zoom meetings, analysis and video work on the phones and laptop.

“That’s pretty much the preparations we could do, but I think, on the other hand, we go into this game fresh with guys who had niggles and injury having had enough time to recover. We’ll see where we are tomorrow but we’ll be pushing as hard as we can.”

Backline coach Mzwandile Stick said the team were hoping to provide some relief to a country in turmoil through positive and unifying actions on the field. Not for the first time, it falls to the multicultural Boks to bring some hope to South Africa.

“We are actually living in a sad time currently from what we can see on the news and social media,” Stick said.

“One of the main reasons for us as Springboks is to give hope and add smiles to faces. We will never forget when we won the World Cup, people of all colours — pink, black, brown and yellow — we were only speaking one language: rugby. Everyone was happy. That’s the kind of hope we want to build.

“If our job is to get an opportunity to unite the country then that is what we will aim for. We have an opportunity to play the Lions and show South Africa, once we work together and spread positive energy anything is possible and we can achieve what we set our minds to as a nation.” DM