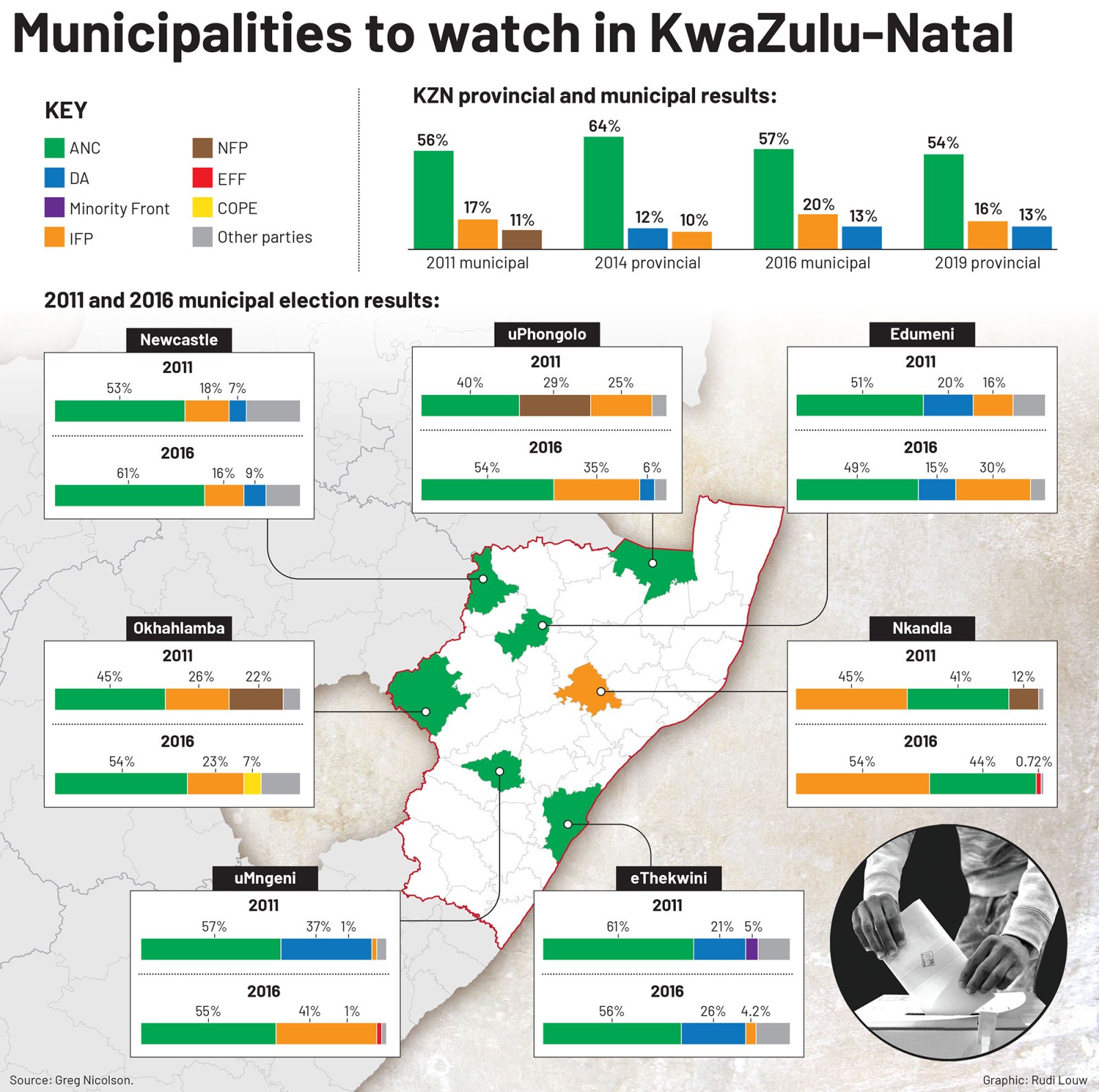 The former president’s fall from grace is expected to erode support for the ANC.

Under Jacob Zuma’s leadership, the ANC saw significant growth in members and votes in KwaZulu-Natal (KZN). What will happen now that he’s in jail?

Although former president Zuma’s legacy as ANC leader is defined by allegations of rampant corruption, the weakening of state institutions and entrenchment of party factionalism, he was a boon for the party’s electoral chances in KZN.

In his first election as party president, the ANC won 66% of the provincial vote in KZN in 2009, up from almost 47% in 2004. The number of ANC members in the province grew from 102,000 at the 2007 ANC Polokwane conference to 331,000 ahead of the 2012 Mangaung conference. The country’s second-most populated province became an ANC stronghold under Zuma’s leadership and it propped up the party’s national support while it declined in other provinces.

This week the former president started his 15-month prison sentence for ignoring a Constitutional Court order to testify at the Zondo Commission. Zuma and his political allies have misleadingly claimed that the judgment mirrors those under the apartheid system and that he is a victim of a broad conspiracy, often suggesting that the current ANC leadership is to blame.

With the 27 October local government elections looming (subject to a panel currently considering whether they can, in fact, be considered free and fair amid the Covid-19 pandemic), will the jailing of the ANC’s most prominent member in KZN have any effect on the party’s chances?

William Gumede, chair of the Democracy Works Foundation and an associate professor at the Wits School of Governance, said it is important to note how Zuma increased the ANC’s support in KZN. Gumede, who grew up in the province in the 1980s, said his generation was heavily divided between the ANC and the IFP. Then, 15 years ago, Zuma launched his ANC leadership bid after he was sidelined while facing rape and corruption charges during Thabo Mbeki’s presidency.

Gumede called Zuma’s 2007 ANC presidency run “the most ethnically divisive campaign in ANC history”. Within the tripartite alliance, Zuma rallied those whose voices and policies had been ignored by Mbeki. More broadly, he used populist nationalist rhetoric to build support among isiZulu-speakers and suggested critics did not want to see a Zulu lead the ANC.

“He really undermined the Constitution and South Africa’s idea to create a common ‘South African-ness’ based on our diversity,” said Gumede. Yet Zuma’s populist stance won the ANC votes. A proud traditionalist, he improved the party’s relationship with King Goodwill Zwelithini, who died in March 2021, and the ANC made significant inroads into the IFP’s base while the IFP, then led by Mangosuthu Buthelezi, faced its own split in the form of the National Freedom Party.

The ANC took 54% of the KZN provincial vote in 2019, a steady decline from 64% in the 2014 provincial election and 57% in the 2016 municipal results. Gumede expects the ANC to continue on the same trajectory in the upcoming local government elections, where it could fall below 50% in some of the municipalities it currently governs.

He said the Zulu royal family has less influence while the appointment of Zwelithini’s successor remains contested and that the revelations of corruption in the ANC has dented the party’s image. The country’s economic malaise has been exacerbated by the Covid-19 pandemic and even the black middle class, which has traditionally supported the ANC in KZN, could consider either staying away from the polls or supporting another party.

Gumede said the IFP would probably take back some of the votes the ANC won in the Zuma era. Buthelezi, who stepped aside as IFP leader in 2019, has started to play a stabilising rather than a polarising role, said Gumede. “The older he’s gotten, he’s become more statesman-like, more inclusive.”

“There’ll be more coalitions,” he said.

Sussman said Zuma’s incarceration could be “pretty devastating” for the ANC in KZN. The province has the most ANC members but none of its leaders are represented in the party’s top six.

Former provincial party leader Zweli Mkhize is on special leave from his position as health minister because of the Digital Vibes scandal. ANC Provincial Chairperson and Premier Sihle Zikalala appears to have a significant command of the party’s structures but does not have the gravitas of a leader like Zuma and has been focused on managing the ANC’s different factions in the wake of Zuma’s reign.

“I think eThekwini is definitely in play if this goes pear-shaped,” said Sussman. The ANC won 56% of the vote in Durban in 2016, which dropped to 54% in 2019, and it could be pushed under 50% if aggrieved ANC members are reluctant to campaign and the EFF and other smaller parties win support. In the 2019 provincial vote in eThekwini, the EFF took 11.5%, while the DA won 22.8%.

Sussman said, however, that should the ANC fall under 50% in eThekwini, it will probably look to coalition partners such as Al Jama-ah and the African Independent Congress to form a majority.

The ANC will face pressure in municipalities in parts of northern KZN where the party took voters from the IFP in the Zuma era.

In the 2019 elections, after Zuma had been placed under pressure to step down as state president the previous year, the ANC’s biggest drop in support nationally was in KZN.

A number of factors contributed to the decline but Zuma’s fall from grace clearly played a part.

That looks set to continue and, according to Gumede, it’s a positive for South Africa. It’s a move away from ethnic nationalism and back to the question of which party will serve residents best. DM168