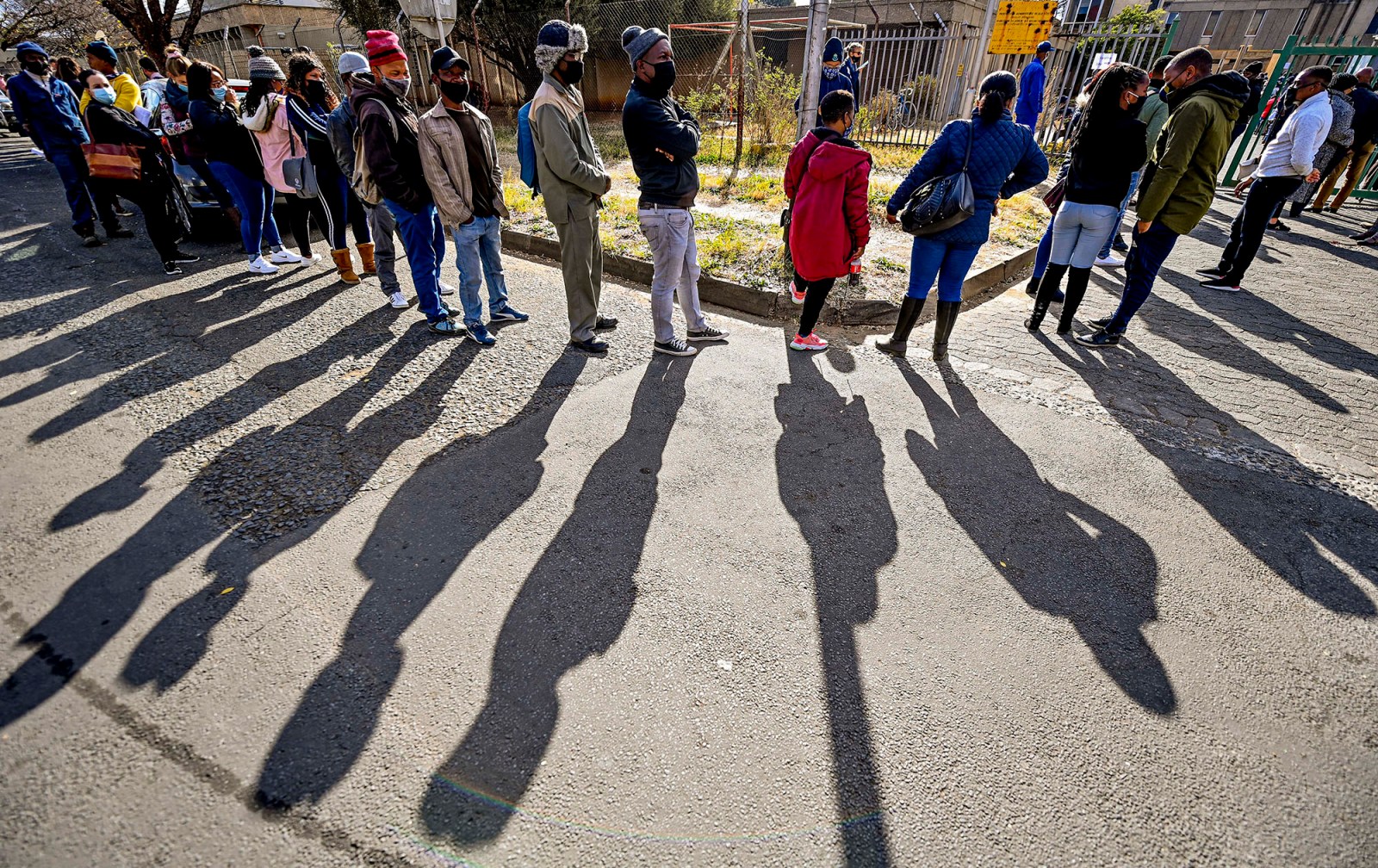 Teachers and support staff queue in line for the Covid-19 vaccination at Universitas Hospital on 24 June 2021 in Bloemfontein. (Photo by Gallo Images / Volksblad / Mlungisi Louw)

“We will definitely not finish today,” said Minister of Basic Education Angie Motshekga during a press briefing on 7 July. The Education Sector Vaccination Roll-out Programme was due to end in 24 hours.

As of 7 July, more than 400,000 educators had been vaccinated nationally with the Johnson & Johnson vaccine since 23 June.

This had been increased to 789,554 people, confirmed Elijah Mhlanga, the department’s spokesperson, on 7 July.

“The Department of Health has offered additional doses that we will now use to vaccinate other people in the sector, who were initially not included,” Motshekga said.

Speaking about the roll-out of the programme, Basil Manual from teachers’ union Naptosa said: “I think it’s a bit of a mixed bag. I think insofar as the state-paid teachers are concerned, it went really well.

“When it came to governing body-paid staff – and remember there are far more governing body support staff than there are teachers – it started going wobbly… KZN is particularly bad, where there are hundreds of people [who] haven’t yet been uploaded on to the system.

“And then the department underestimated the number of people because they don’t have the records of governing body-paid people on the school premises – cleaning staff, groundsmen.

Until 7 July, the following people were eligible to be vaccinated:

DM168 contacted all provincial departments of education and received responses from Gauteng, Limpopo and the Western Cape.

There were 101,892 educators in Gauteng, including government and independent educators, said Steve Mabona, spokesperson for the Gauteng Department of Education.

“We will only be able to provide accurate figures on the number of those who [were] vaccinated during the weekly provincial update on the coronavirus by the Provincial Coronavirus Command Council (PCCC) on Friday 9 July 2021,” Mabona said.

She said 6,715 staff were scheduled for 7 July, of which 2,009 had been vaccinated by 11am. “Tomorrow (8 July) 5,848 are scheduled, with the remaining staff scheduled for Friday, Saturday, Sunday and Monday.”

Spokesperson for the Limpopo Department of Education, Tidimalo Chuene, said the target for educators and support staff (including educators and non-educators on Persal, the state salary system) was 61,572. As of 7 July, 46,460 had been vaccinated. “Mop-up” of the outstanding staff was planned for 9 July.

On 2 July, the Gauteng Department of Education said in a media statement that it was “extremely alarmed that 9,113 educators and support staff – some with comorbidities – are refusing to take the life-saving Covid-19 vaccination jabs”.

The roll-out faced “a number of difficulties”, Motshekga said in the press briefing. That not all staff are on Persal slowed the process.

Also, about 20,000 educators had tested positive for Covid-19 in the previous 30 days and could not receive the vaccine now. Furthermore, educators who had received the flu vaccine in the previous 14 days or were pregnant also had to wait.

In line with this, Manual said many of the people who didn’t get vaccinated couldn’t because they had Covid-19 or had comorbidities. “And so, the number of people refusing is lower than what we think it is.

“And nationally, when you compare it to the number of teachers that there are, it’s actually insignificant because we’ve always known that we would have the anti-vaxxers and we’d have the doubters. But I still think we’ve done very well with educators.”

However, there were teaching staff who refused the vaccine for other reasons.

“I am quite surprised that teachers listen to myths,” Motshekga said.

The department had been made aware that a number of young female teachers declined to be vaccinated after being told by a healthcare worker that it would make them infertile. This is despite the Johnson & Johnson vaccine having been proved to be safe for all adults who are not pregnant.

A teacher from a public school in Johannesburg, who wishes to remain anonymous, told DM168: “I didn’t go for the vaccination as I felt uneasy; also I don’t know the long-term effects of the vaccine.

“I am not against vaccines that have been implemented and have been backed by enough research. I am thankful that the vaccinations were open for those who felt at ease with it.”

Mabona said about vaccine hesitancy: “There were many reasons for hesitancy towards vaccination, including religious beliefs and fears about the impact of the vaccine on one’s health.

“Misinformation also played a role in discouraging educators from taking full advantage of the opportunity to vaccinate.”

In an attempt to discourage this hesitancy, Mabona said the department used various information-sharing methods, including, “working with unions and other stakeholders in the education sector to counter the misinformation and conspiracy theories which are going around about the Covid-19 vaccine. MEC Panyaza Lesufi and Head of Department Edward Mosuwe were also at the forefront of the vaccination campaign to prove to educators that there was nothing bad in taking the vaccine.”

Overall, many departments, unions and teachers seem to be happy with the way the programme was run.

A teacher from a public primary school in Soweto said: “The experience was nerve-racking for me as I didn’t know what to expect. The side effects lasted three days … I’m happy I got the shot.” Another said: “From my side, I’m happy and okay.”

A public school teacher who received her vaccine shot in Diepsloot said she was very happy after she got it. Everyone at her school, bar one receptionist who chose not to be vaccinated, got the jab. Manual said: “I think it’s been a good programme. It certainly upped the game when it came to the entire vaccine rollout of the country.”

But there’s still more than 380,000 people in the sector who need to be vaccinated.

“Now our [goal] is to try to squeeze a mop-up day,” said Manual. “It very much depends on the Department of Health. And now that the over 50-year-olds have started as well, it’s just a little more complicated.”

Motshekha said: “We are going to ask the Department of Health to give us an extension in order to mop up the outstanding vaccinations.

“We want to use the time to conclude the programme properly in the sector to accommodate those excluded in terms of the criteria outlined by the Department of Health; these are the individuals who recently tested positive for Covid-19 and those who took the flu vaccine.”

Mhlanga emphasised that this would need “a lot of coordination” between the two departments at national and provincial level.

There was no new deadline as this depended on the Department of Health, he added. The department had noticed a decrease in vaccinations in the previous week and had encouraged educators to get vaccinated as soon as possible. DM168