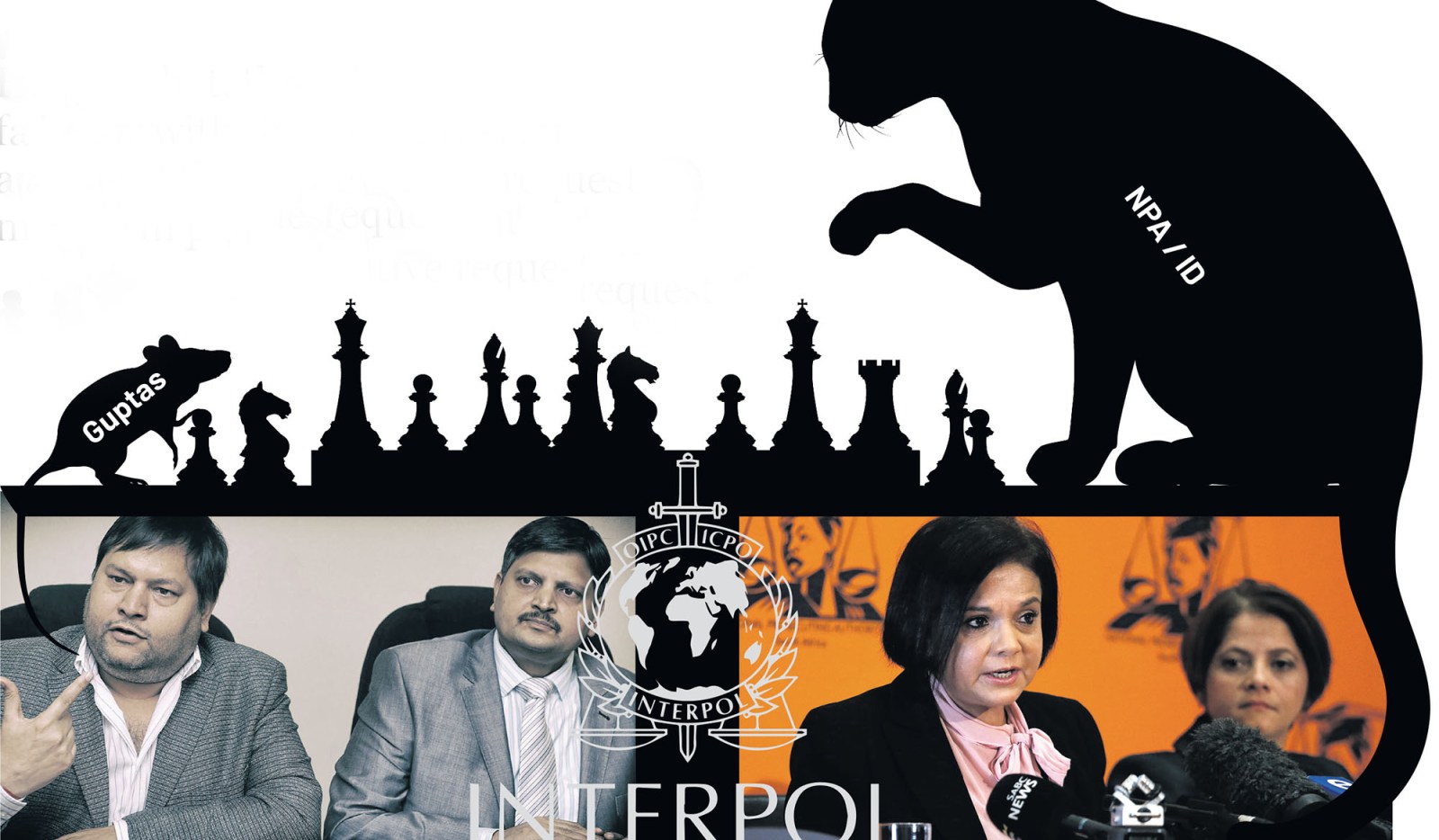 Indications are that the billionaire Gupta brothers and their wives have pipped South African law enforcement to the Interpol post with a preventive strike that is likely to stall the issuing of red notices.

Interpol red notices are a vital tool in South Africa’s quest to definitively locate members of the Gupta family for possible extradition.

It therefore makes sense that blocking efforts to secure such notices would be a priority for the family – four of whom are fugitives from justice.

Brothers Ajay, Atul and Rajesh are already affected by financial sanctions imposed by the United States under its Global Magnitsky Act as well as those more recently introduced by the United Kingdom. An Interpol red notice would probably maroon the Guptas because it makes undetected international travel incredibly difficult.

But, for now, those red notices are not in hand as requests to Interpol remain pending. And, unless they are secured, it would be near impossible for South Africa to prepare or submit effective extradition requests.

The Guptas fled their Saxonwold, Johannesburg, compound roughly five years ago and established themselves in a R300-million mansion in Dubai’s Emirates Hills. But their current official whereabouts are a mystery.

There has been growing speculation that they have moved along – India and Uzbekistan have been mentioned anecdotally as their new base, and business activity has also been picked up in Russia.

Extradition efforts – likely to take years in any event – must be directed at the right country in order to avoid unnecessary and costly flops along the way.

The Gupta name has dominated testimony at the State Capture Commission of Inquiry over the past three years. But, although the Guptas are implicated in massive corruption, thus far there is only one set of arrest warrants in hand for four members of the family.

Atul and Rajesh Gupta and their wives, Chetali and Arti, are wanted on charges of fraud and money laundering relating to a R24-million criminal case in the Free State.

It is this case that triggered law enforcement’s request for red notices for eight of the accused who are currently outside SA.

But whereas the Investigating Directorate (ID) of the National Prosecuting Authority (NPA) obtained red notices for four of the eight it applied for, those requested for the Guptas are still under consideration.

This became apparent when the ID corrected an earlier erroneous statement in which it had announced the Gupta notices were in hand.

The delay in processing the Gupta requests suggest they are possibly receiving a greater level of scrutiny than those requested and granted by Interpol in respect of the other accused in the Free State matter.

A red notice is the most serious of the various Interpol notices and captures identity details such as a physical description, photograph and fingerprints of a suspect. It is generally valid for five years and also lists the criminal offence for which the person is being charged, with convictions or warrants.

The ID’s request currently sits with the Commission for the Control of Interpol Files, an independent legal body responsible for ensuring that requests do not have a racial, religious, military or political agenda.

An option available to individuals who fear abuse of the system is to file a preventive request with Interpol.

“Such a request can be submitted even before the real attempts of law enforcement to enter your data into the Interpol wanted database, in case you have real concerns that law enforcement will soon take this opportunity,” according to information on the agency’s website.

Preventive requests, though, are not captured on the system, nor are they announced to law enforcement. So those seeking red notices would only be confronted with the possibility of a preventive request having been made when actually submitting a request.”

Bob Kaarls, an international red notice specialist attorney based in The Hague, told DM168 that preventive requests are extremely simple but effective at holding law enforcement at bay.

When they are in place, wanted requests are temporarily blocked by the General Secretariat of Interpol for verification.

“All this time, you can travel safely, because during the investigation (into the validity or legality of the application) none of the Interpol member countries will be able to see your data in the Interpol database,” Kaarls said.

Essentially, anyone who believes they may become the target of a red notice for the wrong reasons can pre-emptively approach Interpol. In such cases, they make a preventive request, a mechanism that prohibits their information from being shared with other jurisdictions until Interpol is satisfied with the bona fides of the application.

Kaarls previously represented South African businessman Zunaid Moti, who was arrested on a red notice in Germany – it has since been deleted. The Dutch lawyer also successfully filed a preventive request for a Zimbabwean businessman living in South Africa in 2019.

He said that, though he was not familiar with the Gupta case, it appeared that a preventive request may be in play.

Rudi Krause, the Gupta family’s attorney in SA, did not respond to questions from DM168. One of the questions asked was whether the red notices being sought by the NPA were not merely intended to flush out the Guptas – and whether this could not be avoided by the Guptas simply advising authorities of their whereabouts.

Krause was quoted in a News24 report on 8 July stating that he had asked for a copy of the police docket in the Free State case and any information the NPA may have submitted to Interpol.

“We record that our clients are of the view, given the provisional indictment they have seen and which was presented to the court, that the state’s case is non-existent or fundamentally misconceived. Our clients intend to review the issuing of arrest warrants for them and request the high court to set aside these warrants of arrests,” the article read.

This suggests the Guptas have begun their fight against the prosecution with an immediate bid to dissect the grounds and validity of the arrest warrant. Their mission to hold off red notices will probably run in parallel.

The local Interpol office, structurally housed within the police’s Crime Intelligence division, is unlikely to be oblivious to the alleged crimes committed by the Guptas. But the criteria for red notices require, among other things, a criminal charge. And, at the moment, South African law enforcement has just the one Free State case in play.

If submitted, a preventive request by the Guptas would be placed before a committee of Interpol member countries comprising Moldova, Russia, Finland, Angola and the United States.

The Guptas are extremely well-resourced financially and have traditionally demonstrated a healthy appetite for legal challenges.

Once they are located and extradition requests can be fired off to the right country, it is likely they will litigate, even test the relevant laws in those countries with as much fervour as SA has come to know them for.

Their litigation mantra traditionally has a “go big or go home” feel to it.

They filed two R500-million defamation cases against two newspapers in 2013, one of which had published one of the first allegations of a Saxonwold bribe offer in 2013. (Nothing ever came of the lawsuits.)

Though seemingly unwilling to return to SA to answer to allegations of corruption and bribery made at the Zondo Commission, Atul Gupta wants a new South African passport and is actually suing the minister of home affairs for it.

The Guptas have also unleashed a torrent of litigation against the business rescue practitioners running eight of their companies – this battle has now landed at the door of the Constitutional Court.

These court cases are not for nothing: if the Guptas ever wish to reverse the listing on the US Treasury’s Office of Foreign Assets Control or stave off extradition in other jurisdictions, they would have to present a convincing portfolio of defence missions undertaken to clear their names.

They are likely to engage foreign courts with equal fervour in the quest against extradition – if that day ever comes. DM168