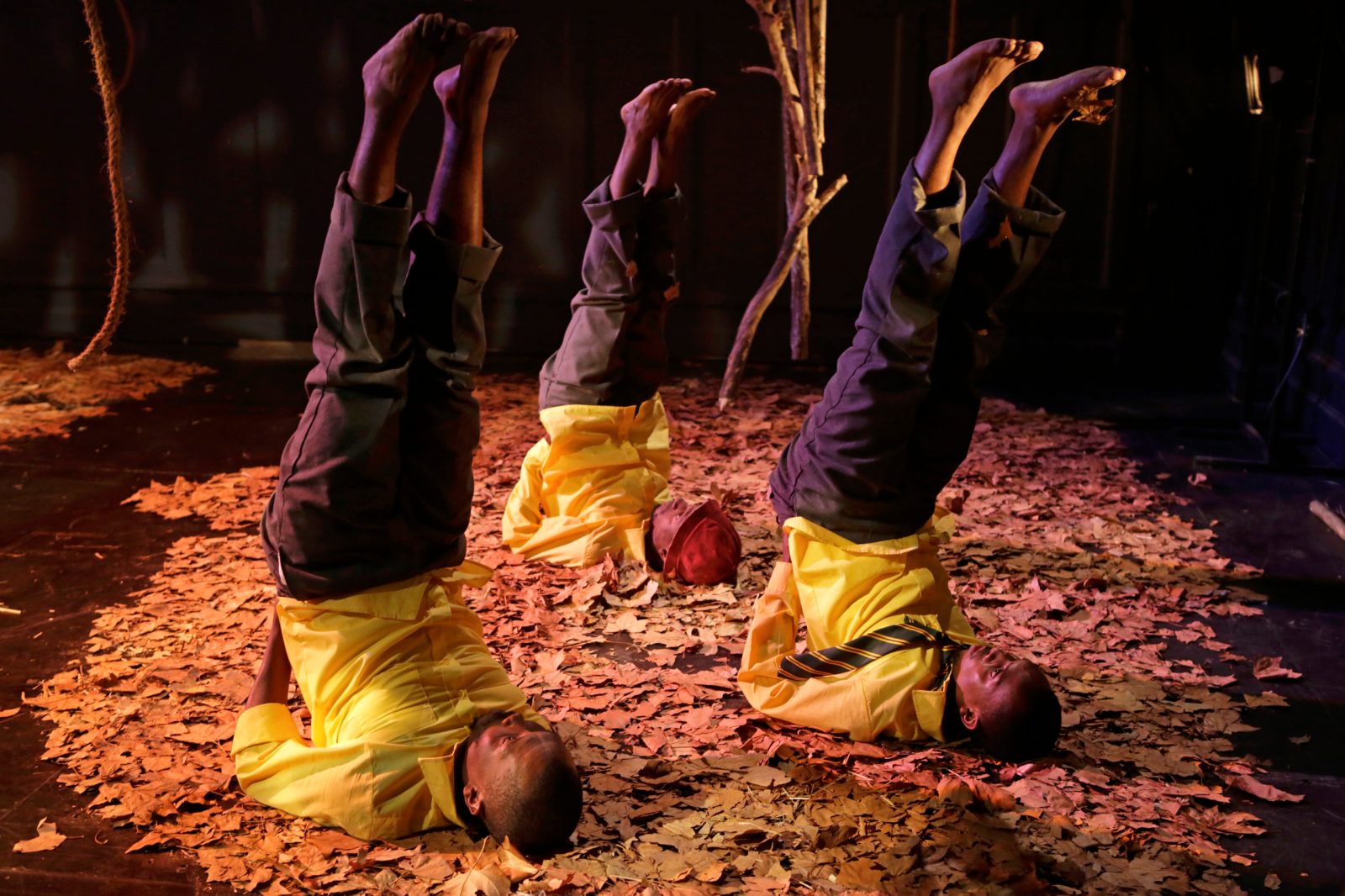 ‘Art as archeology, as excavation’ is the approach director/producer Qondiswa James uses in devising this story through its iterations, ‘rewriting the archive, we tell our own story’. Ndinxaniwe is a radical, tragic story that recognizes the f***ery of the Rainbow Nation lie, and excavates the truth of the past.

This story was first published on The Critter.

Based on Credo Mutwa’s The Coming of the Strange Ones from his internationally acclaimed Indaba, My Children, James’ interpretation of Mutwa’s classic is a gift. It is a lens, a parallel, a continuum that illustrates how colonialism still plays out today in South Africa’s higher education institutions.

“It is 11:17AM in the middle of a school day in the yard and we hear a sound like tight air spit from a piston and school children running. Pounding feet like stampedes for war cries, war crimes; I look outside through the grimy window panes of school buildings in the Transkei, and I think I imagine June 16, turned on its head.”

Ndinxaniwe follows three teenagers attending a Catholic school in the forest of a rural town in the Eastern Cape. You feel the dust, the leaves, the smoky haze. The set, designed by Themba Stewart has branches from floor to ceiling, transporting us to the scene inhabited by those three boys in their school shirts, ties and grey pants.

The score is enchanting, natural and vocal, traversing a staggering range between peace and trauma. Soundscapes of birdsong in the kraal, the snoring of slumber, the stretching and rising from it. The live soundtrack by musicians Iman Adams and Nkosenathi Koela, who sit among haystacks, sets the rural scene in which tension tautens.

Animals are embodied by the performers. Every motion and utterance is in sync, kinetic, and deliberate. The rolling of their necks slowly into the lowing cows, the panting with expectant canine eyes, the panic of the sheep. It crescendos to a blistering wall of frenetic sound and movement.

In a monologue, making direct eye contact with the audience, we are told that this is about “one of those schools” left behind by the revolution. We are reminded how “white monopoly capital” has stolen labour and plundered land. Why am I using the past tense here? It remains the case now. I am reminded, and this is an important reminder. “We are failing, you are failing”. Now, still. The play critiques the insidious effects of colonialism and patriarchy – effects that are tragic, common and current.

Ndinxaniwe is more than stirring contemporary adaptation of Credo Mutwa’s The Coming of the Strange Ones. It’s a masterwork in de-colonial artistic practice. Looking at African history through theatre, knowing and performing this history, the very telling of it by those to whom it belongs, is a powerful de-colonial tool.

To say that the iconic African author, philosopher and sangoma Vusamazulu Credo Mutwa’s work draws on African mythology is an inadequate description of his contribution to humanity. In many concrete ways, he immortalized ancient mythologies and documented indigenous history that is vital to our understanding of ourselves.

He instills in us the philosophy that knowledge is not finite or linear, it is transcendent as the soul. But it can also be forgotten and lost to the obscurity of time and the erasure of indigenous narratives. This erasure is what Mutwa countered, and this is what Ndinxaniwe counters. Access to heritage is not guaranteed to post-colonial nations, and this is what makes Credo Mutwa and Ndinxaniwe so indispensable, so potent.

As the teenage boys get high, drowsily slipping deep into the past, we follow their hallucinations. Hallucinations – as a word – feels incorrect here, as these events depict a real and brutal colonial history. Melting into their vivid trip, we’re taken to the very first point of contact between the white colonialists and the indigenous population.

The lyricism of the performer’s bodies on stage reflects Credo Mutwa’s own lyrical telling of a time before missionaries arrived with guns and bibles. The settler ships appeared, in Mutwa’s words, like “many-legged sea serpents” from the river waters, and pink-skinned men with cold green eyes leapt out, the ‘Strange Ones’ with their metal weapons and need for baskets of food so they could engineer their plan to divide-and-conquer, kill and enslave, multiply themselves and their stolen wealth. To grow crops that, to quote Mutwa, are “fertilized with hacked bits of dead slave bodies”.

We the audience are often looped back to the schoolboys’ days, returned by strummed chords and routines starting anew: the break-time school bell ringing, repeated physical motifs, and a sterling display of physical theatre by performers Mfundo Zono, Mphumzi Nontshinga and Sivuyile Dunjwa who shift seamlessly between characters.

We are awakened from this fevered nightmare by a gunshot. We see “June 16th turned in on itself”. Instantly, we remember the reality that this nightmare, the one of colonialism, is not over. That violence against black children has not ended, the war still rages. DM/ML