Fall of Tigray capital: Ethiopia on the brink of meltdown without genuine negotiations 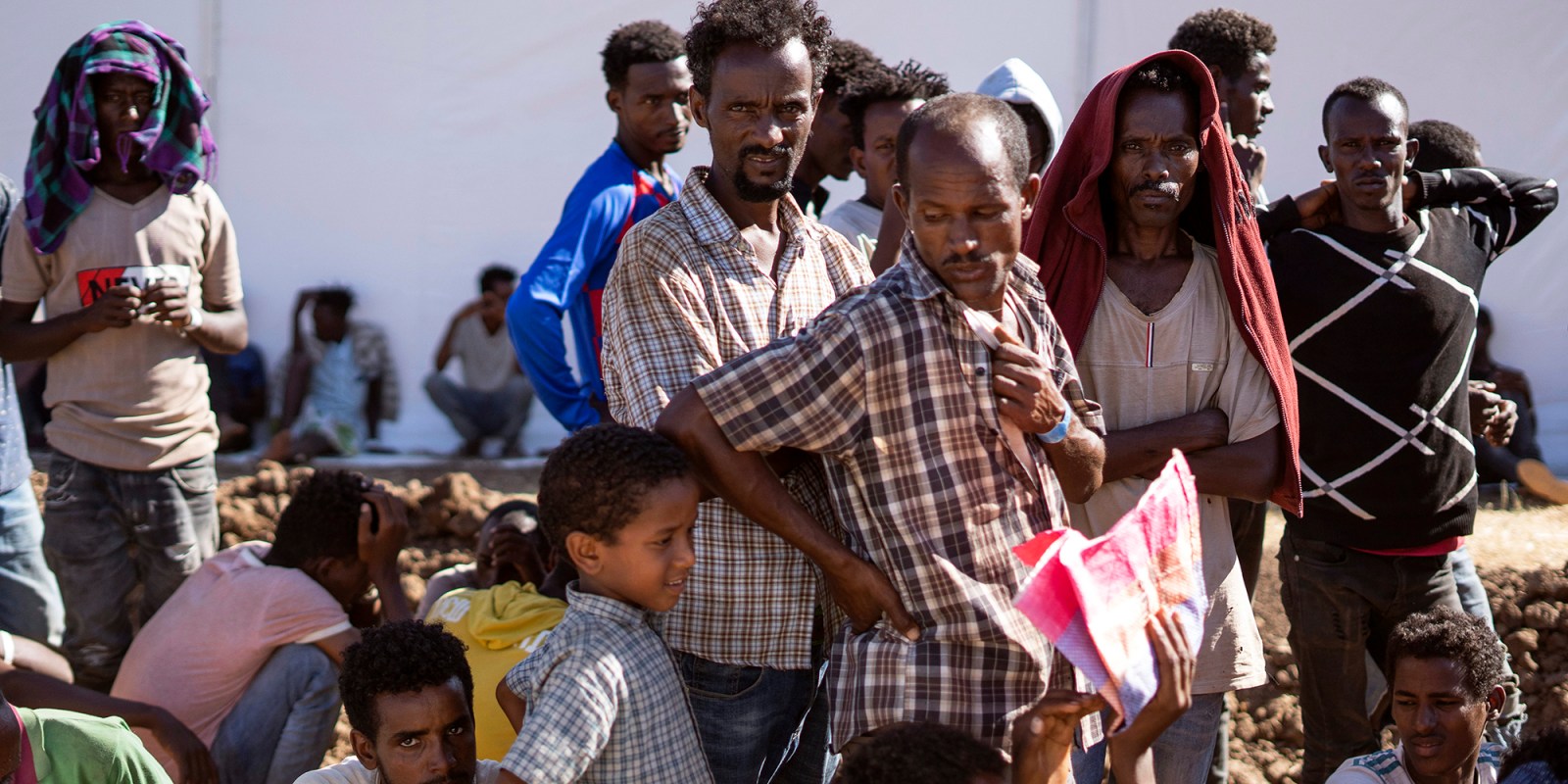 Ethiopian refugees from Tigray region wait to receive aid at the Um Rakuba refugee camp, the same camp that hosted Ethiopian refugees during the famine in the 1980s, about 80km from the Ethiopian-Sudan border in Sudan, 30 November 2020. (Photo: EPA-EFE / Ala Kheir)

Unless there is a political solution soon, Ethiopia is on the brink of descending into an ethnic meltdown similar to the disintegration of Yugoslavia, one that will redraw the map of the Horn of Africa and cause reverberations throughout the continent.

The civilian leader of Tigray’s government, Debretsion Gebremichael, said after the recapture of the Tigrayan capital, Mekelle, last week that Tigray’s future as a part of Ethiopia was in doubt.

“The trust has been broken completely,” Gebremichael said. “If they don’t want us, why should we stay?” The future, he said, would depend on “the politics at the centre”.

Partly inspired by developments in Tigray, two separatist groups, the Oromo Liberation Front and the Oromo Federalist Congress, from the country’s largest ethnic group, the Oromo, announced the establishment of a transitional government in Oromia. Ethiopian Prime Minister Abiy Ahmed is an Oromo but not trusted by the Oromo separatists.

Ahmed called for a unilateral ceasefire with Tigray, but only after his forces were defeated on the battlefield. Foreign Minister Demeke Mekonnen Hassen declared that they want to “resolve the crisis through dialogue”. But the TDF is still regarded as a “terrorist” organisation and there are reports of ethnic Tigrayans being beaten and detained in other centres in Ethiopia.

The Tigray People’s Liberation Front (TPLF) announced that it would support a ceasefire and engage in talks with the federal government only once there is a full withdrawal of Eritrean and Amhara troops from Tigray.

For now, the concern of the international community is the deteriorating humanitarian situation in Tigray, with the UN reporting that 400,000 people are already starving and another 1.8 million on the brink of famine.

UN Emergency Relief Coordinator Mark Lowcock told a special hearing last month that “Eritrean soldiers are using starvation as a weapon of war” and that “rape is being used systematically to terrorise and brutalise women and girls. Aid workers have been killed, interrogated, beaten, blocked from taking aid to the starving and suffering and told not to come back.” He described it as the worst famine the world has seen in a decade.

The UN confirmed the destruction by the Amhara militia of a bridge spanning a deep river valley that had been the main route for aid to Tigray. Meanwhile, power and telecoms have been cut off to Mekelle.

The military invasion of Tigray by the Ethiopian federal army and the Eritreans started last November. The hoped-for quick and dirty operation bogged down for eight months, facing a stubborn guerrilla resistance that finally turned disastrous in late June for Abiy’s forces.

An internal US report leaked to The New York Times accused militia fighters from Amhara of engaging in a systematic ethnic cleansing campaign in Tigray, erasing entire villages through force and intimidation. A separate report by Amnesty International claimed that Eritrean forces massacred hundreds of unarmed Tigrayan civilians in the town of Axum in late November.

Some analysts believe that the Tigrayans have imprisoned themselves in a landlocked territory surrounded by enemies on all sides. But the Tigrayans are powerfully motivated by the belief that genocide has been attempted against them and they are fighting with their backs to the wall. This is not a war of choice, but of survival.

The TDF is commanded by the extremely able military strategist Gal Tsadkan Gebretensae, who, alongside the Eritreans, marched into Addis Ababa in 1991 to overthrow the Mengistu regime, and headed the Ethiopian military force that defeated Eritrea in 2000.

The question that many are asking is, if negotiations do not get off the ground, what does the TDF do next? Tsadkan could attempt to break out and attempt a march on Addis Ababa, but it would be a massive overreach if he does so without securing the political support of other major ethnic groups, especially the Oromo.

He could go for Asmara, the capital of Eritrea, and try to unseat or at least spark an uprising against Issayas Afeworki, who is already precariously positioned because of internal opposition. This appears to be what many young Tigrayans, who are baying for blood, want and reports from the ground indicate that TDF forces have been moving north.

Either way, the delicate balance, with many regional and international interests at stake in Ethiopia, has provoked fear of a wider regional war.

The international community has cooled towards Abiy, whose descent from Nobel Peace Prize laureate to alleged perpetrator of genocide has been a rapid political implosion. Tanzanian opposition leader Zitto Kabwe has called on the Nobel Committee to rescind the peace prize. Eritrea, whose leader, Issayas, has headed a repressive state for decades, was already a pariah.

Abiy and the Eritreans have accused the Biden administration of meddling in their affairs and backing the Tigrayans. Samantha Power, the head of USAID and one-time chronicler of the Rwandan genocide, has drawn particular vitriol on social media for her outspoken comments on the causes of the famine. But, for now, the US is still focused on the humanitarian catastrophe rather than the political dimension of the crisis.

Secretary of State Antony Blinken has accused the Eritreans and the Amhara regional forces of committing atrocities, and Chris Coons, Senator from Joe Biden’s home state of Delaware and a close confidant of the president, travelled to Addis Ababa to meet with Abiy last month to convey concerns directly from Biden.

Abiy, a devout Pentecostal Christian, does have support among the evangelical movement in the US, and right-wing Oklahoma Senator Jim Inhofe, who once brought a melting snowball to the Senate floor to disprove global warming, was also in Addis Ababa recently to pledge support.

US diplomacy appears to have been effective in dissuading the powerful Crown Prince Mohamed bin Zayed bin Sultan Al Nahyan of Abu Dhabi from continuing his military support for the Abiy-Eritrean war effort. In an interview in The New York Times this weekend, Tigrayan leader Debretsion disclosed that the initial setbacks to the Tigrayans were because they were caught off-guard by a barrage of Emirati drone strikes from Eritrea.

The absence of the drones in this round of fighting helps explain some of the successes of the Tigrayans.

Abiy tried to solicit support from the Russians by sending Demeke Mekonnen Hassen, the deputy prime minister and minister of foreign affairs, to Moscow to meet with Foreign Minister Sergey Lavrov but he is said to have come away empty-handed.

Russia is tight with Egypt, which is watching the situation closely because of one of the major regional sources of tension – the Grand Ethiopian Renaissance Dam – in which the two sides remain far apart. The Egyptians have moved some of their forces closer to the frontline in Djibouti.

Sudan is looking brittle too, with Prime Minister Abdalla Hamdok declaring on 22 June that “frightening” tensions were threatening to pull the Sudanese state apart. The International Crisis Group has warned that Sudan’s border dispute with Ethiopia could spiral into a full-scale war – a fear which is probably overstated but less easy to dismiss when amplified by Ethiopia’s escalating civil war.

Facing this gathering storm, the international community, including the African Union, is going to have to get its act together and work in concert to create the conditions for a national conference to deal with the deep-seated and complicated history of this conflict. The Tigrayans, who effectively ruled Ethiopia for two decades during the regime of Meles Zenawi, cannot claim that they are blameless.

Kjetil Tronvoll, professor of peace and conflict studies at Bjørknes University College in Norway, has warned that pressure has to be put on the Ethiopian government to open up for genuine negotiations.

“For this to happen the Ethiopian government must first recognise the facts on the ground. They were militarily defeated. The TDF controls Tigray.” DM