While the official Korean Central News Agency gave no further details on Wednesday, North Korea has recently been bracing its people for a tough road ahead. Earlier this month Kim told his ruling party the food situation was “growing tense,” and his own dramatic weight loss had citizens worried he looked “emaciated.”

Any Covid-19 outbreak in North Korea, if widespread, could potentially be devastating given the country has an antiquated health care system and likely no vaccines.

“The worst-case scenario for Kim is that the pandemic continues to weigh on his country’s economy, which could ultimately undermine his legitimacy to rule,” said Cha Du-hyeogn, who served as a security adviser for former South Korean President Lee Myung-bak and is now a visiting research fellow at the Asan Institute for Policy Studies in Seoul.

Even though North Korea says it has no coronavirus cases — a claim doubted by U.S. and Japanese officials — it has taken drastic containment measures that have worsened the regime’s economic woes, including closing the border with its biggest trade partner, China. Along with international sanctions, the measures have put North Korea’s economy on pace to barely grow this year after suffering its worst contraction in decades in 2020. 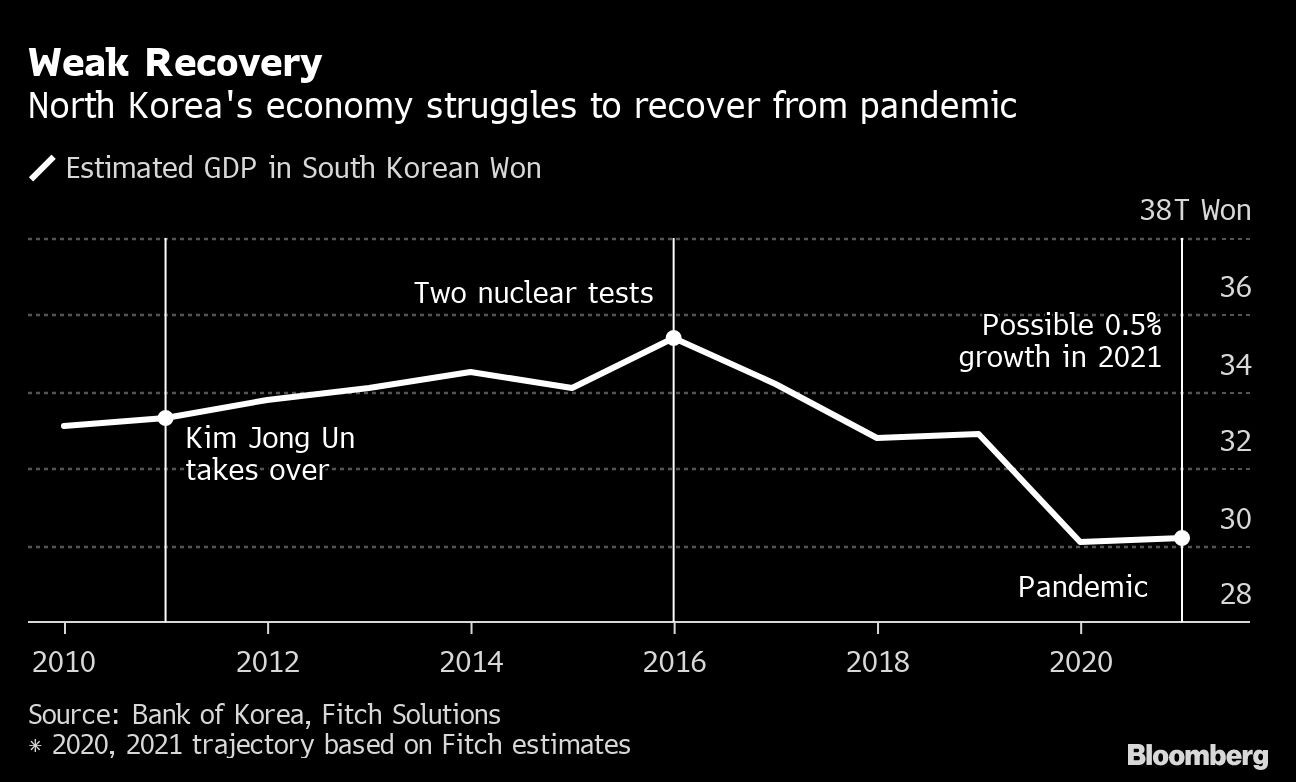 By making its problems public, Kim may be sending a signal to the Biden administration to allow more assistance through international organizations like the United Nations World Food Program, which has had a presence in North Korea for years. China on Wednesday said it would consider helping North Korea if necessary, without revealing if it had sent any vaccines.

But at the same time Kim is reluctant to appear as if he’s seeking help from the outside world. Allowing foreigners in the country risks undermining his strict quarantine policies and raises doubts at home over his management of the virus and diplomatic relations with the U.S., which holds the key levers of allowing more trade and aid.

North Korea was supposed to receive 1.7 million AstraZeneca Plc vaccines by the end of May through Covax, the program backed by the World Health Organization. But shipments were delayed after North Korea was unwilling to follow the organization’s instructions and rules, Japan’s Kyodo News reported. Gavi, the nonprofit group that delivers immunizations through Covax, confirmed that North Korea has received no doses.

Kim doesn’t want outsiders seeing the poor state of the country, which could make him more vulnerable to global efforts to hold him to account for human-rights violations, according to Soo Kim, a Rand Corp. policy analyst who previously worked at the Central Intelligence Agency.

“Especially in the case of North Korea — an isolated, severely under-equipped country whose leader does not care about the population’s welfare — it was just a matter of time that circumstances would be difficult to continue burying,” she said. “Kim is probably concerned about the virus to the extent that it may endanger his own health and potentially weaken his legitimacy, but he’s not so concerned about the number of deaths and case numbers.”

The regime was able to weather a famine in the 1990s that killed an estimated 240,000 to 3.5 million people. But that played out over a number of years and came when there was less information coming in from the outside world.

Foreign aid organizations have had trouble getting into North Korea to deliver humanitarian assistance, with the World Food Program saying in late 2020 it would be “critical” for the country to ease restrictions “on the entry of international personnel.” With harvests falling short and imports curtailed, North Korea this year is facing a shortage of about 860,000 metric tons, equivalent to about 2.3 months of food use for the entire country, according to the UN’s Food and Agriculture Organization.

North Korea has taken strong action after incidents that could expose the country to the virus. About a year ago, Kim’s regime locked down the border city of Kaesong out of fear a person who defected from South Korea may have carried the virus. It investigated the military unit responsible for patrols and pledged to “administer a severe punishment” to those responsible, official media said.

About two months after that, North Korean personnel along its southern coastal border shot a man who worked for South Korea’s fisheries ministry and burned his body at sea. He was apparently treated that way because the North Koreans believed he could’ve been infected with the coronavirus, Yonhap News Agency reported at the time, citing a South Korean military official.

Further complicating matters, in recent weeks North Korea’s official media has started to include commentary that vaccines may not prove be effective against new virus variants — potentially an attempt to paper over the country’s lack of doses. Fear of the virus also means it’s unlikely North Korea will hold diplomatic talks with the Biden administration anytime soon, according to Duyeon Kim, an adjunct senior fellow in Seoul at the Center for a New American Security.

“It’s apparent that they see the virus as the biggest threat to their survival,” she said. “More so than what they claim is American hostility.”