Eastern Europe Is Racing to Use Covid Shots Before They...

Eastern Europe Is Racing to Use Covid Shots Before They Expire

Eastern Europe Is Racing to Use Covid Shots Before They Expire

(Bloomberg) --In the eastern corner of the European Union, two countries are desperately trying to avoid wasting a precious commodity: Covid-19 vaccines.

Demand for inoculations has plunged in Romania and Bulgaria, leaving stockpiles of shots that officials need to use fast before their expiry dates. The alternative would be to destroy them, which would be a depressing outcome given the shortage of shots elsewhere, such as in poorer African nations.

With spares doses piling up, shots are being sold or donated to other countries, governments want deliveries delayed, and Bulgaria’s hotel industry is pushing to have free vaccinations given to foreign visitors. Demand in Romania has dropped to such an extent that members of Argentina’s national rugby team were able to get their shots in Bucharest this month ahead of a match. 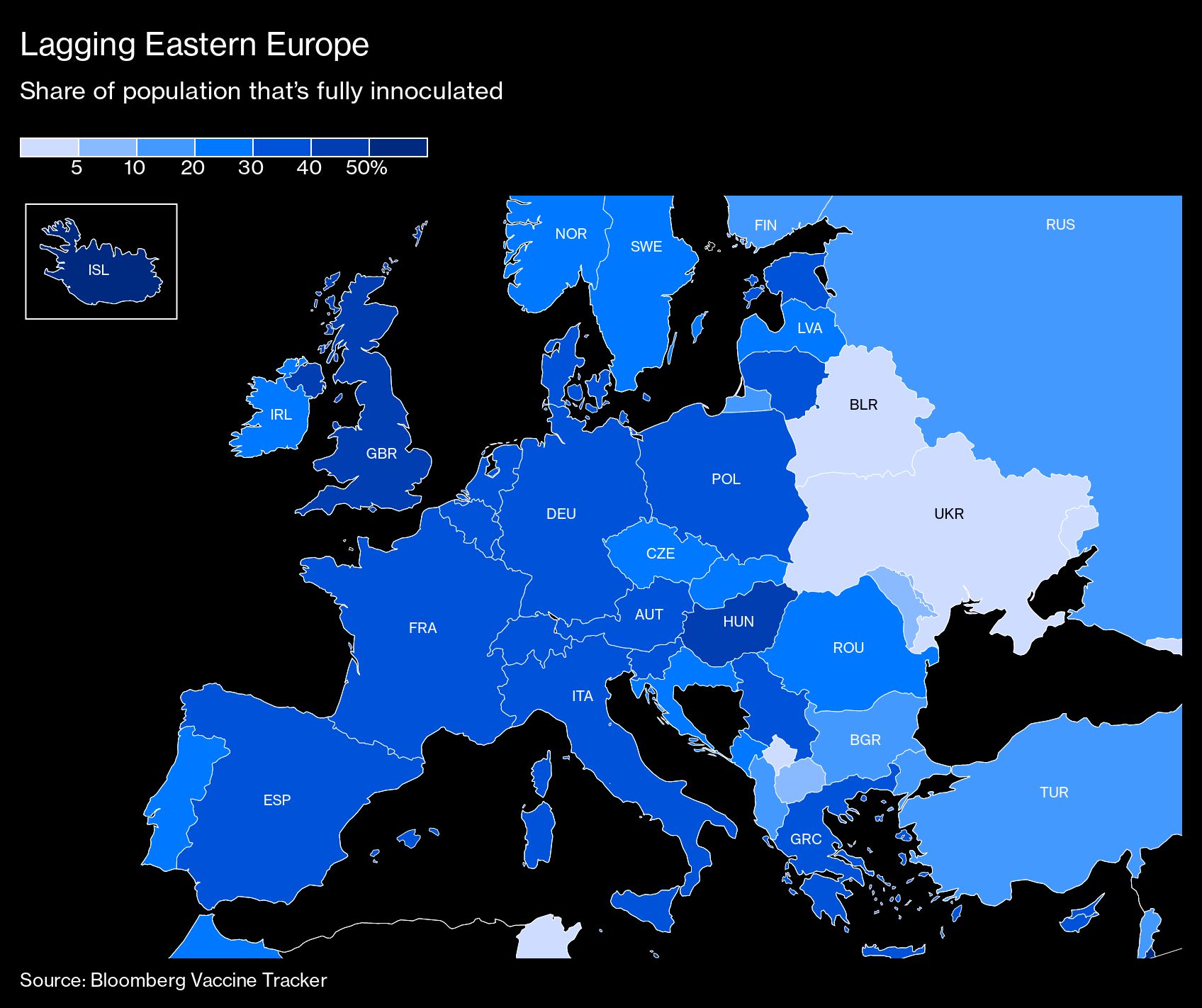 Hesitancy in the two countries stems from a long-standing distrust in the authorities, as well as skepticism about some vaccines, particularly after the AstraZeneca Plc safety concerns. In Romania, just 24% of the population is fully vaccinated, and Bulgaria’s figure is half that.

Romania’s situation is more pressing, with 35,000 of its Astra doses expired as of Wednesday. (Manufacturers are testing to see if shelf life can be extended.)

Bulgaria has about 20,000 with an end-July deadline, though it hopes to use many as second doses before then. But both want to delay more deliveries to avoid oversupply; in Romania’s case, 4.4 million due in the next two months.

The low vaccination rates are a risk for the EU’s efforts to get past the pandemic. The bloc is already contending with the threat of the virus’s delta strain, which is spreading from the U.K as public-health restrictions are loosened and people embark on summer holidays.

“The recent sales or donations won’t impact the availability of the vaccine for our citizens,” Andrei Baciu, Romania’s deputy health minister, said in a phone interview. “But we need to find a balance for the vaccine flows so that we maximize the benefits for everyone.” 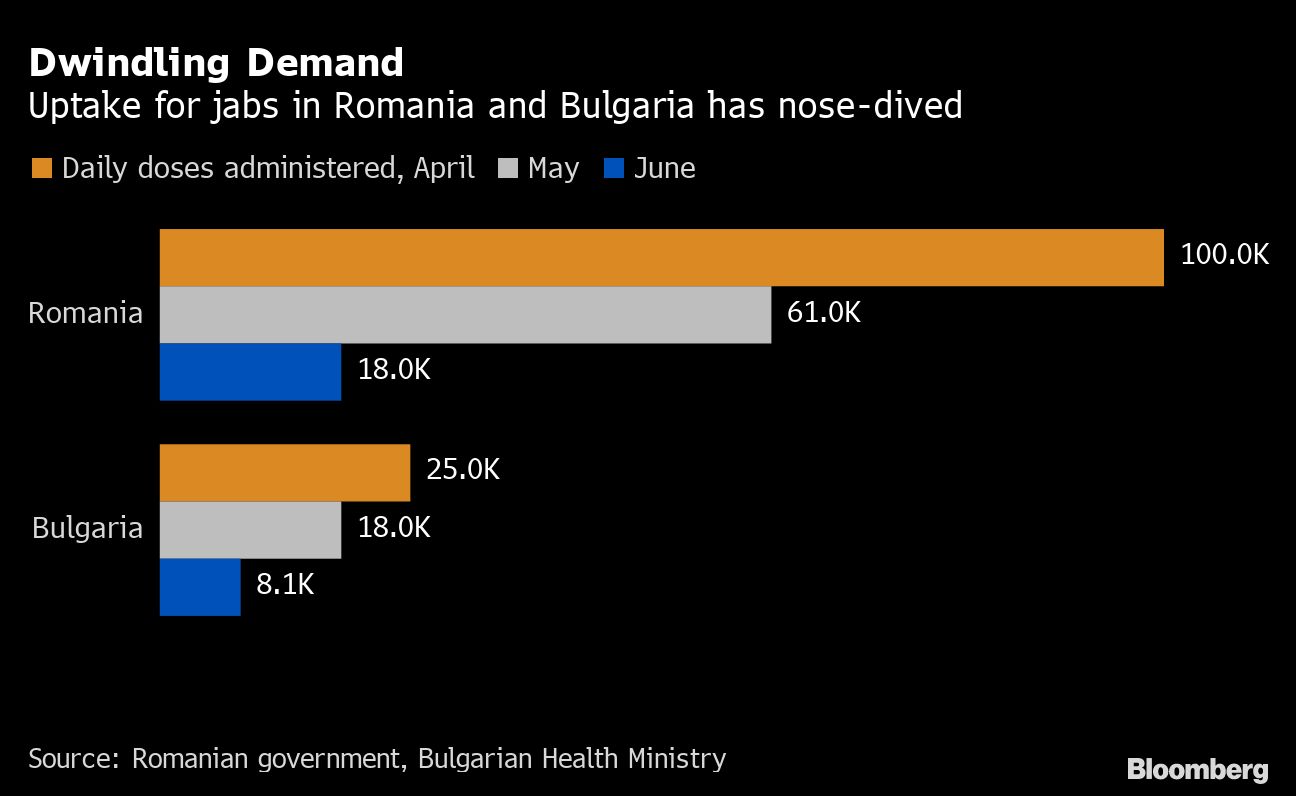 With demand dropping in Bulgaria, the government plans to donate 150,000 doses — mostly Astra — to neighboring countries in the Balkans. The country’s tourism lobby wants foreign visitors to get jabs for free.

“Since Bulgaria and all of us have paid for those doses with our taxes, we suggest they’re used to stimulate vaccine tourism instead of throwing them in the bin,” Polina Karastoyanova, managing director of the National Board of Tourism, said last week.

In Romania, the government is shifting its focus from cities to rural areas in a bid to rescue its faltering inoculation campaign. It’s counting on local doctors who have close ties with local communities to help convince people of the benefits.

But it’s facing an uphill battle to shift attitudes.

“I’m still skeptical about vaccines because I have doubts about their safety and long-term side effects,” said 37-year-old Cristina Florescu from the north-eastern town of Suceava. “I already have side effects from having had Covid and I don’t want to expose myself to other substances.”

The government also doesn’t appear to have high hopes that its initiatives will yield quick success. It agreed this week to sell almost 1.2 million of its Pfizer Inc. shots to Denmark.

–With assistance from Irina Vilcu.