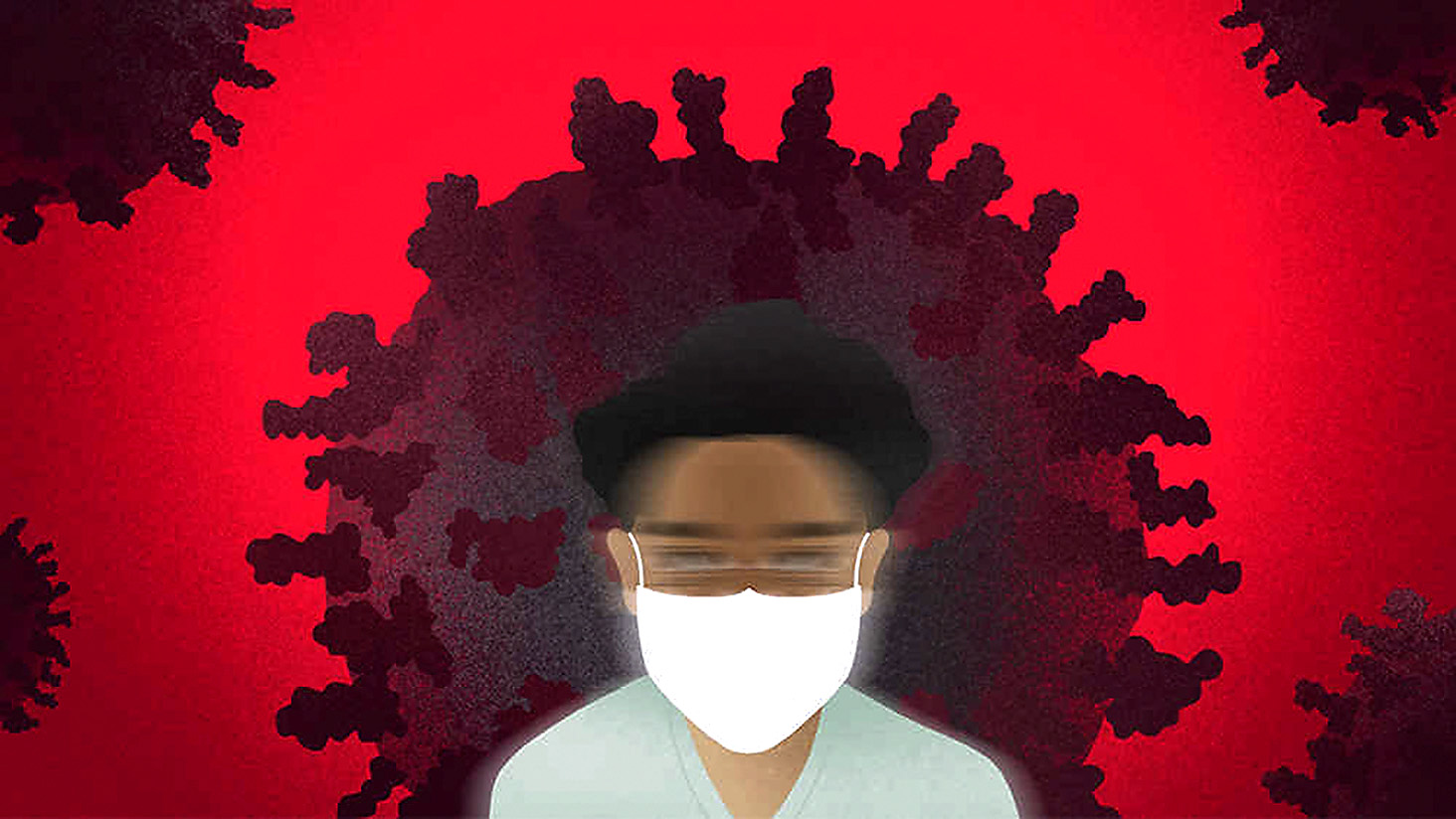 During the past seven days Namibia has experienced the highest level of new infections (11,541) and deaths (239) since the start of the Covid-19 pandemic. (Photo: Dharmesh Patel/Texas A&M Engineering/Wikipedia)

Just about everyone I know is sick. So many friends and colleagues and comrades have died. I am frankly just overwhelmed and too scared to open Facebook in the morning to learn who else has died.

During the past seven days Namibia has experienced the highest level of new infections (11,541) and deaths (239) since the start of the Covid-19 pandemic. These numbers may seem small compared with the rising figures in Gauteng, but in a country with a population of only 2.5 million (compared with Gauteng’s 15.5 million) these numbers are devastating.

On 26 June, 56% of people tested in the past 24 hours tested positive for Covid.

Both state and private hospitals are full to capacity. There are just no beds to be had even if you have the privilege of being a member of a private medical aid scheme. There just are no beds.

Ambulance services are warning potential clients they have reached the point where ambulances cannot pick patients up at home and take them to a hospital as they are obliged to check if hospitals are receiving patients, even non-Covid emergencies, and in most cases they are not. Hospitals are turning ambulances away and there have been instances where patients have remained in the ambulance for more than four hours with all hospitals refusing to take them.

Oxygen is in short supply both in hospitals and for people who are being treated at home in the absence of available hospital beds.

Vaccine uptake in Namibia has been slow. Only 4.7% of the population have received the first dose and only 0,9% are fully vaccinated. Despite this, disturbingly, Namibia is running out of vaccines and during the past week some vaccine sites were only administering second-dose vaccinations. I am due to receive my second dose but yesterday received a message saying:

“We regret to inform you that the Ministry of Health has run out of Covid-19 vaccines. The Lady Pohamba Vaccination Centre is therefore closed until further notice.”

While it did receive donations of 100,000 Sinopharm doses from China and 30,000 AstraZeneca doses from India, as a supposedly upper-middle-income country (according to the World Bank) Namibia has had to pay to participate in the global vaccine distribution scheme, COVAX. 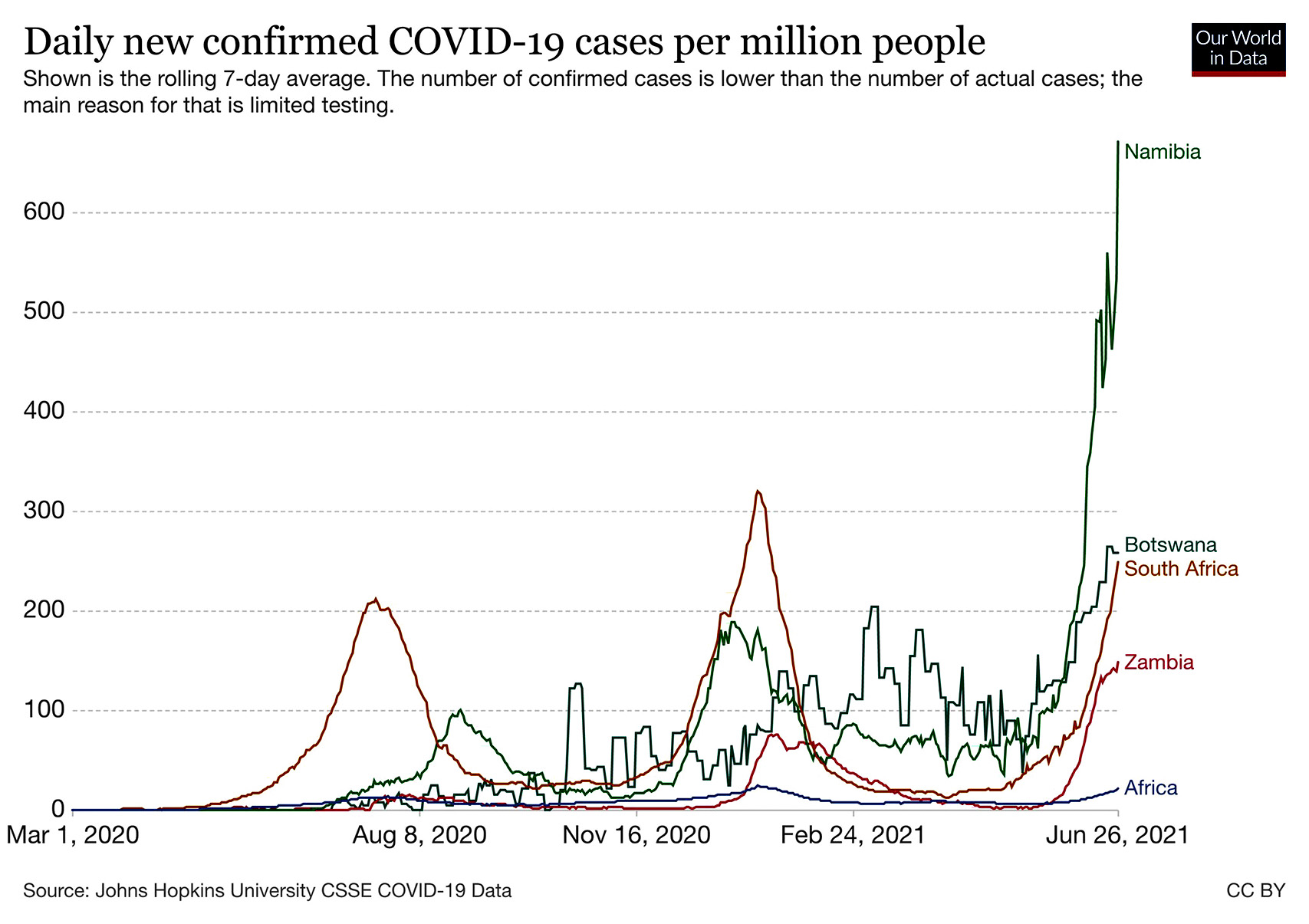 But despite making payment, it has only received 67,200 doses out of 108,000 AstraZeneca doses allocated by the facility. Indications are that the balance will be received in July together with additional vaccines directly from suppliers. In the meantime the Ministry of Health and Social Services has today confirmed that it will continue with first-dose vaccinations with its remaining stock.

The Minister of Health and Social Services, Kalumbi Shangula, told the media that Namibia’s relatively small population has contributed to problems being faced in procuring vaccines directly from pharmaceutical companies; it is said Namibia is “competing” with countries with much larger populations, whose orders are being given preference.

A combination of factors has led Namibia to the perfect storm in which it finds itself.

The government has clearly been woefully unprepared for the third wave and has made little or no attempt to increase hospital bed or oxygen capacity or to employ additional healthcare workers. As a result, critically ill people are being denied their right to health and the hospital care they desperately need.

New infections continue to rise as Namibians blatantly disregard the basic rules on physical distancing, limits on the number of people at gatherings, wearing of masks and hand sanitising. Masks are worn as fashion accessories around the chin and people continue to gather in large numbers.

False information about the safety and efficacy of vaccines has flooded social media, which has contributed to extreme reluctance on the part of many Namibians to get vaccinated. It would appear that attempts by the government to counter this misinformation through traditional and social media have been largely unsuccessful.

A recent survey revealed that nine out of 10 adult Namibians say they are “somewhat” or “very” worried that a member of their household will become sick with Covid-19 (86%) and that the pandemic will negatively affect the country’s economy (94%), their household’s economic situation (92%), and the future wellbeing of Namibia’s children (94%). However, two-thirds (65%) do not trust the government to ensure that any Covid-19 vaccine that is developed or offered to Namibians is safe. To make things worse, 50% of Namibians say they are unlikely to try to get vaccinated even if the government says the vaccine is safe. Close to two-thirds (63%) believe that prayer is more effective than a vaccine would be in preventing Covid-19 infection.

While public money has funded much of the vaccine research, development and manufacturing, the current global intellectual property regime allows pharmaceutical corporations to have a monopoly on how many doses are produced, who gets them and what price they pay. The ability of Namibia and indeed the ability of the rest of the developing world to end Covid-19 and its devastating impact on their citizens requires the production of safe and effective vaccines and other health technologies to be maximised by suspending relevant intellectual property rules and ensuring the mandatory pooling of all Covid-19-related knowledge, data and technologies.

This would permit any nation to produce or buy sufficient and affordable doses of vaccines, treatments and tests. It would allow Africa to increase the manufacture of its own vaccines and to invest in the creation of regional research and development and manufacturing hubs that will enable the development and maintenance of the human capital and physical manufacturing infrastructure required to meet needs now and for future pandemics. DM/MC

Michaela Clayton is a health and human rights lawyer who has worked in the field of HIV, SRHR, gender and human rights since 1989 in southern and east Africa and internationally. Clayton established the AIDS and Rights Alliance for Southern Africa (ARASA) and served as Director from its inception in 2003 until December 2019. She is a long-standing member of the UNAIDS Human Rights Reference Group, of which she was also the co-chair from 2011 until February 2021. She is also a member of the HIV Justice Network supervisory board and the UNAIDS Scientific and Technical Advisory Committee. She now works as an independent consultant on health and human rights.