Africans don’t cry for lions: The victims of human-wildlife conflict are more worthy of tears 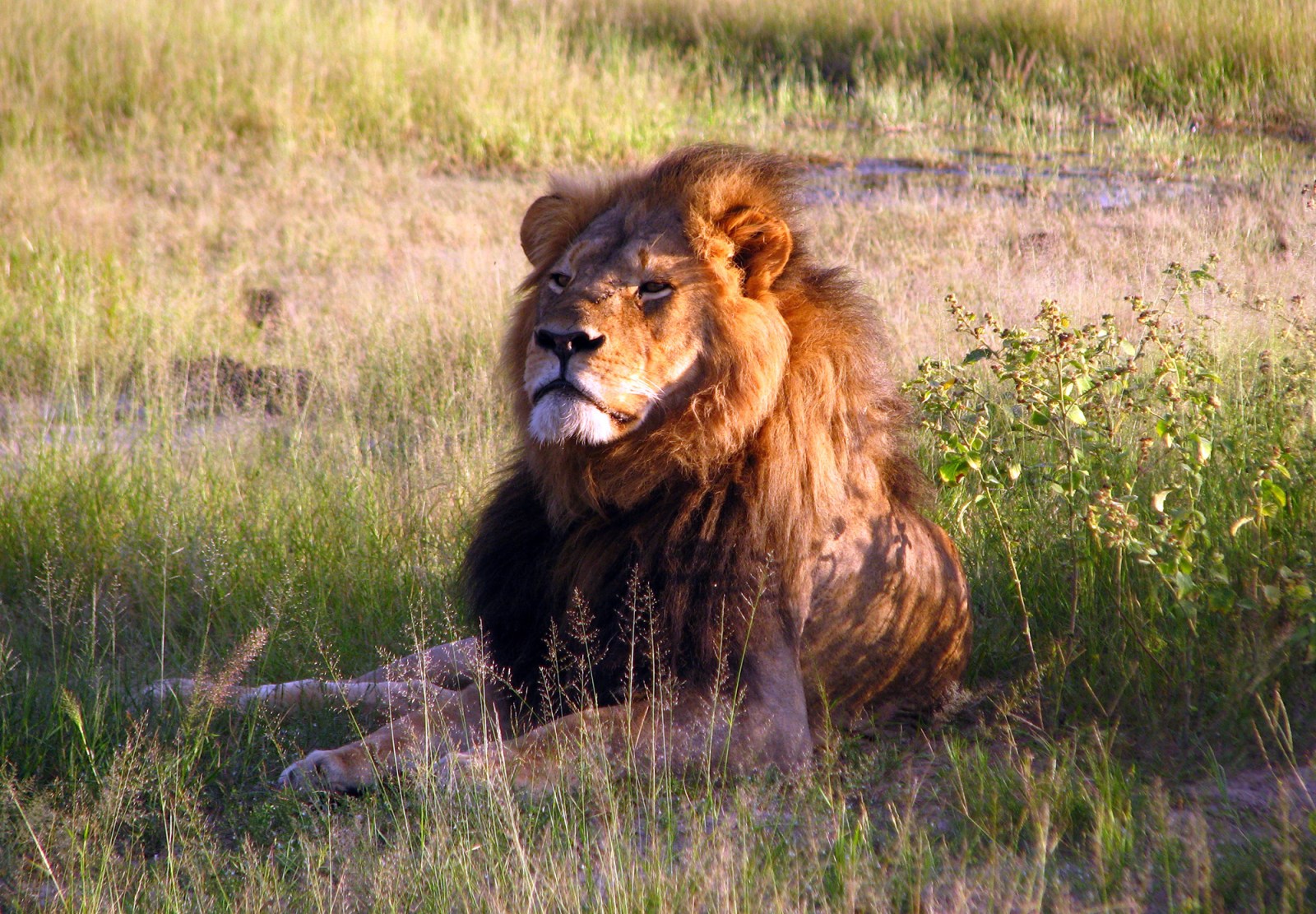 A lion in the Hwange National Park, Zimbabwe. (Photo: Flickr)

Jimmy Kimmel, you cried for Cecil the Lion: Any tears for a human named Rodwell Khomazana?

It has been almost six years since a lion named Cecil was killed by an American hunter in Zimbabwe. The big cat had strayed outside the boundary of Hwange National Park and was shot with an arrow by Walter Palmer, a dentist from Minnesota, on the night of 1 July 2015.

Cecil was popular with tourists who visited the park and was the subject of a study by Oxford University’s highly regarded Wildlife Conservation Research Unit (WCRU), which had been tracking his movements by means of a radio collar since 2008. According to WCRU, Cecil was one of 65 lions, 45 of which were equipped with radio collars, killed by trophy hunters in the area from 1999 to 2015.

Still, Zimbabwean authorities launched a probe into the affair – lions are fair game in Zimbabwe, but there were questions over the legality of this particular hunt – and, well, Cecil had a name! So news of his demise slowly gained traction, and then took off on 27 July when Palmer was outed as his killer.

On 28 July, US talk show host Jimmy Kimmel made an impassioned comment on his show about the incident, choking back tears as he assured Africans that “not all Americans are like this jackhole” – Palmer being the jackhole, of course, whose practice was already being besieged by protesters.

Africans, it turned out, had a different view. Goodwell Nzou, a Zimbabwean doctoral student studying molecular medicine in the United States, wrote an opinion piece in The New York Times titled “In Zimbabwe, we don’t cry for lions”.

“Did all those Americans signing petitions understand that lions actually kill people? That all the talk about Cecil being ‘beloved’ or a ‘local favorite’ was media hype? Did Jimmy Kimmel choke up because Cecil was murdered or because he confused him with Simba from The Lion King?” Nzou asked.

The jarring contrast between the response from affluent Westerners – whose bubble-wrapped children as a rule do not live in fear of wild-animal attack – and that of Africans was brought into sharp relief recently by the heart-wrenching but also heart-warming case of Rodwell Khomazana.

Rodwell, aged nine, was the victim of a chilling nocturnal attack on 2 May during a nighttime church service outside Harare. Savaged by a hyena, he lost his left eye, nose and other parts of his face in the mauling. Through the kindness of strangers, he was brought to SA this past week for reconstructive surgery by a team led by renowned plastic surgeon Dr Ridwan Mia, one of the heroes in this drama. The first surgery on Saturday was successful.

Rodwell’s case – like the hunting of Cecil  – is sadly not exceptional, but is surely far more worthy of tears.

In April, ZimParks said: “In the past five years, nearly 500 [human] lives have been lost while 582 cattle were lost to wildlife attacks. Thousands of hectares of crops have been destroyed. Over the same period, 153 people were injured by wildlife.”

So, in the six years since Cecil’s slaying, at least 500 Zimbabweans have been killed in human/wildlife conflict, and Rodwell has now been added to the list of those maimed and traumatised. Many no doubt suffer from post-traumatic stress disorder. There can be few things more brutalising than being mangled by something that wants to eat you or being roughed up by something the size of an elephant.

In May this year, I spoke to ZimParks spokesperson Tinashe Farawo about some of these issues. (He could not be reached for comment this week.) He told me that, by that point in the year, 21 Zimbabweans had been killed in wild animal attacks, a dozen by crocodiles. Last year, he said, half of those killed had fallen victim to elephant attack, followed by lions, hippos and crocodiles.

I cannot independently verify this data but have asked some experts about it.

Keith Somerville of the Centre for Journalism at the University of Kent, who has written widely on wildlife issues, told me by email that the data “doesn’t look totally unbelievable” if one included snake bites, but still felt that “around 100 deaths a year looks a bit high”.

Another lion expert I spoke to did not feel he knew enough about the situation in Zimbabwe but did not think it inconceivable if snake incidents were included.

The bottom line is that a lot of people are almost certainly killed or maimed by big animals in Zimbabwe each year, even if there are question marks about the official figures. Across the continent the toll is far higher.

Zimbabwe’s Zanu-PF-led government is hardly known for its transparency, and its record on human rights is appalling. The officially stated Zimbabwe data on the human, crop and livestock toll of human/wildlife conflict must be set against the backdrop of its attempts to revive its big game hunting industry, with plans to issue permits to shoot up to 500 elephants this year. With an economy in shambles, it needs cash anywhere it can get it.

Zimbabwe also sits on, according to official figures, stocks of more than 130 tonnes of ivory and more than five tonnes of rhino horn, which it would like to sell on global markets, but is stymied from doing so by Cites, the UN convention that regulates the worldwide trade in wild flora and fauna and the products derived from them.

Debate about such issues, such as “consumptive” versus “non-consumptive” use of wildlife, is perfectly legitimate. The “anti-trade” narrative tends to be driven by activists targeting a mostly affluent and white audience without any skin in the game. Plenty of wildlife NGOs and all governments support a regulated trade or consumptive use of wildlife in some form of another. That is one reason Cites exists.

Zimbabwe’s case is complicated by the fact that, although it claims to need money for wildlife conservation, the opaque and well-documented corrupt nature of the Zanu-PF regime offers little promise that such funds raised will be put to good use.

That does not take away from the brutal fact that many Zimbabweans, almost all poor, black and rural, fall victim to wildlife conflict by virtue of their poverty, even if the official figures are not verifiable and possibly inflated. The stats may also be understated because of the state’s lack of capacity and cultural issues such as the links made between wildlife attacks and witchcraft, which mean such incidents may go unreported. The victims fall below what I have termed the “faunal poverty line” – a truly terrifying space that was the prehistoric, never mind pre­-industrial, norm – to which no child should be subjected in the 21st century.

Zimbabwe also claims to have an elephant population of about 85,000 and growing, second only to Botswana’s. That is a recipe for growing human/wildlife conflict unless initiatives such as fencing, which are extremely costly and have ecological consequences, are rolled out.

Back to my question to Kimmel (a comedian I often find witty and entertaining, but on this issue is simply a product of his bubble-wrapped, above-the-faunal-poverty-line environment, which I share with him): Do you have any tears for Rodwell?

In his New York Times piece, Nzou noted: “We Zimbabweans are left shaking our heads, wondering why Americans care more about African animals than about African people.”

Africans don’t cry for lions: The victims of human-wildlife conflict are more worthy of tears