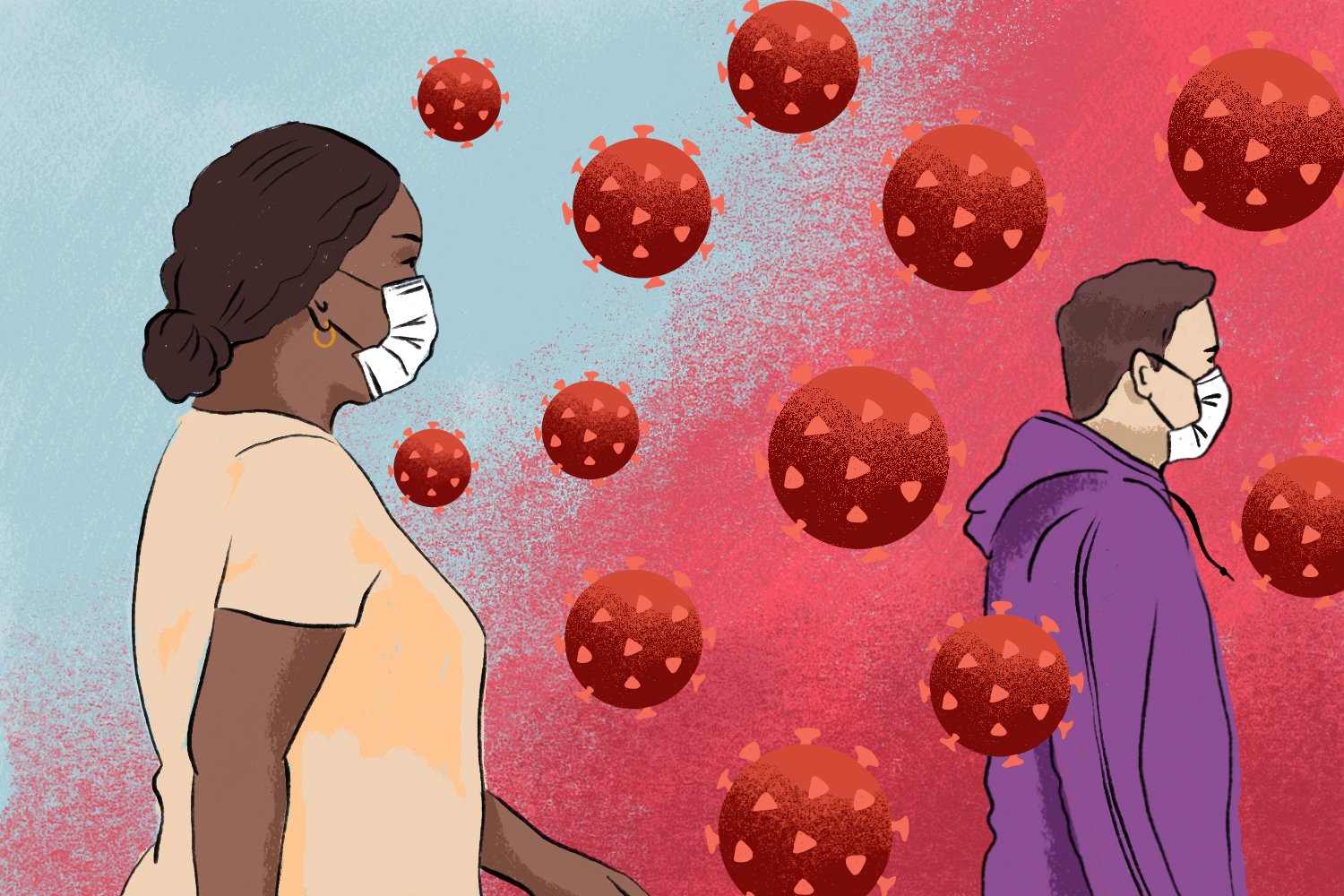 A trial in Bangladesh has shown that wearing masks reduces the risk of Covid, especially surgical masks, though cloth masks are also beneficial. (Illustration: Lisa Nelson)

Ahead of the announcement that President Cyril Ramaphosa is set to address the country on Sunday 27 June at 8pm, the Health Department confirmed the Delta variant of Covid-19 was in circulation in South Africa.

Acting Health Minister Mmamoloko Kubayi-Ngubane on Saturday confirmed the presence of the Delta variant of Covid-19 in South Africa.

She said that previously, the department said the country’s third wave was unlikely to pass the peak of the second wave of infection – based on the assumption that the country did not have a new variant.

“Unfortunately, this is no longer the case – our scientists, after their sequencing experiments, have discovered that we have a new variant that is prevalent in our country … this new variant is called Delta,” she said.

The Delta variant (B.1.617.2) was first detected in India. Thousands died in that country from the variant which also saw relatives scrambling to get hospital beds for sick family members in the densely populated country.

According to research by the Network for Genomic Surveillance in South Africa (NGS-SA), the Delta variant is present in Gauteng, KwaZulu-Natal and Western Cape.

Preliminary estimates from genomic data and epidemiological studies suggest Delta might be significantly more transmissible than other variants of concern, including Beta, read the presentation document delivered by Professor Tulio de Oliveira and Dr Richard Lessells from the KwaZulu- Natal Research Innovation and Sequencing Platform (KRISP). The Beta variant ( B.1.351) was initially first discovered in South Africa.

According to the presentation, the Delta variant shows as yet no signs of disease severity but there is a risk of reinfection, especially in those who have had the Covid-19 Beta variant.

Earlier in June, Reuters reported that Soumya Swaminathan, the World Health Organization’s chief scientist said the Delta variant was becoming the dominating Covid-19 variant across the world. Currently, 85 countries have now confirmed the presence of the Delta variant.

In her weekly newsletter, general practitioner Dr Sheri Fanaroff said the Delta variant spreads more easily – and more quickly – among people. “In other words, close contact doesn’t necessarily need to be for longer than 15 minutes for someone to get infected. Any close contact, especially in a closed room, or any contact without masks, is significant,” she wrote on 26 June.

The Delta variant’s symptoms may be different to other strains of Covid-19 she said. Symptoms include: headaches, coughs, sore throat, body pains and runny nose, sneezing, and congestion.

“Gauteng will look like India” warned Professor Francois Venter, a communicable diseases expert at Wits University, in News24 this week. Doctors have already raised warning alarms about the increased cases in Gauteng – which has seen the highest number of infections this week during the daily Covid-19 confirmed cases announced by the Health Department. Daily Maverick reported doctors are under severe pressure and that hospital beds are now running out. Oxygen usage has also increased.

On Friday, Kubayi-Ngubane called for consequences for those who organised gatherings which exceed 50 people indoors and 100 outdoors.

This week, Daily Maverick reported supporters of suspended ANC Secretary-General Ace Magashule organised a rally outside the high court in Johannesburg while his suspension case was held virtually. Then on Friday 25 June, the EFF held its “March to Save Lives” to the Tshwane offices of the SA Health Products Regulatory Authority (Sahpra) to demand the regulatory authority approve the Sputnik V and Sinovax vaccines from Russia and China respectively. Both events took place in Gauteng.

Police spokesperson Colonel Brenda Muridili told News24 the police would hold the convenors of the march responsible for exceeding the gatherings regulations, but they did not want to take action against the marchers, because they wanted to avoid a “chaotic situation”.

On Sunday 27 June, President Cyril Ramaphosa will address the country at 8pm on measures to curb the spread of Covid-19 in the country. DM