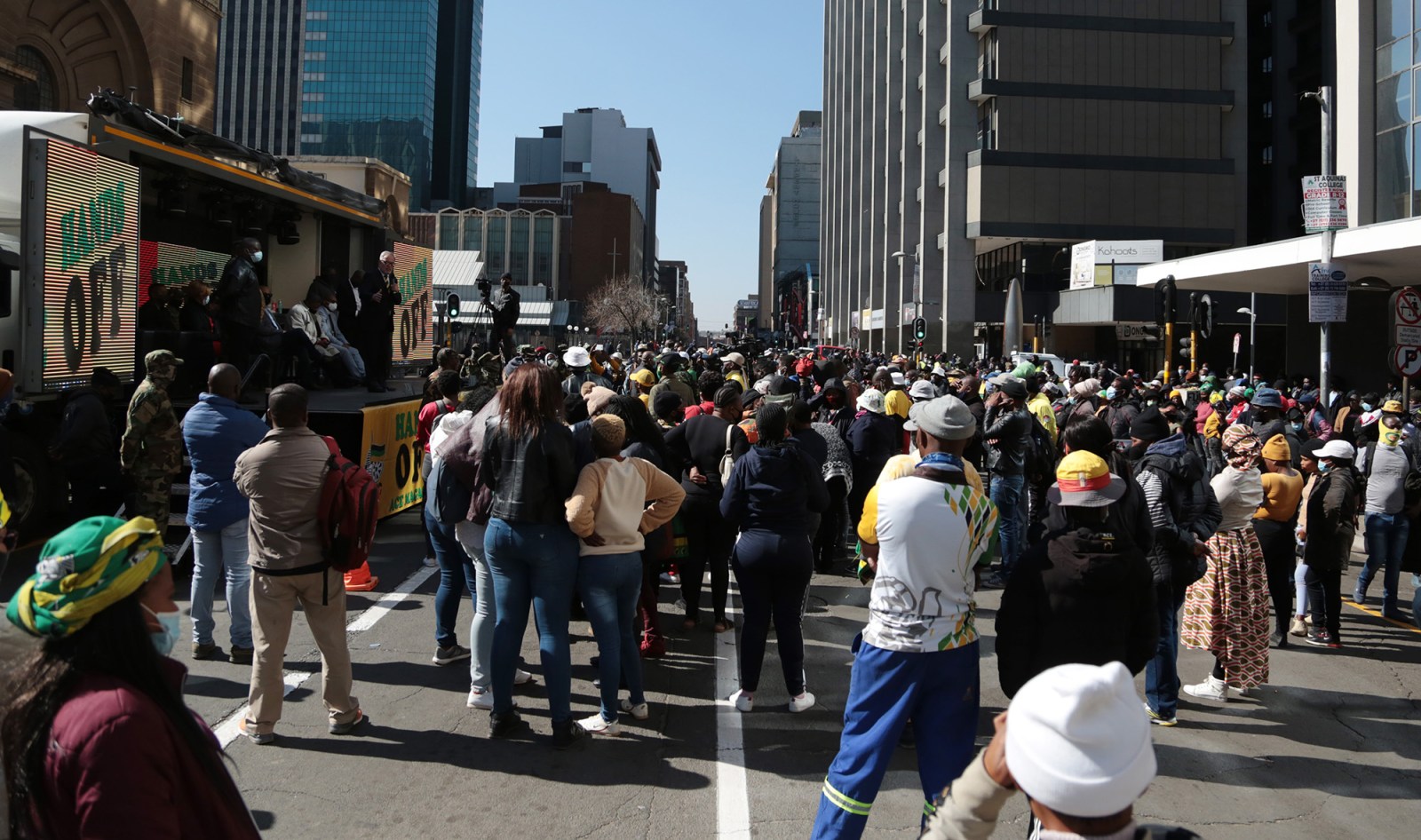 As Ace Magashule supporters rallied outside the high court in Johannesburg, judges — who had gathered in a virtual online hearing —  threw out an application for RET forces to intervene in the case to rescind the suspension of the ANC secretary-general.

As Johannesburg’s inner-city battles a red zone tsunami of Covid-19 cases and deaths, suspended ANC secretary-general Ace Magashule supporters organised a rally outside the high court in Johannesburg without requesting permission as required.

The court hearing, wherein Magashule is asking for an interdict against his suspension in a case against the ANC, its deputy secretary-general Jessie Duarte and President Cyril Ramaphosa, is being held completely virtually. However, the strongman’s forces still set up a big mobile rally stage in the morning.

The judges all attended virtually on Microsoft Teams while Magashule and his legal team, led by Advocate Dali Mpofu, gathered at an off-site venue.  There was no court presence which means the rally was expedient. Magashule was visible behind Mpofu on the screens.

A crowd, which our photographers said numbered just over 100 people, were brought in by taxis under a banner called “Hands Off Magashule.” Wearing ANC regalia,  they gathered first in small groups then in a larger group, some with their masks off. Besides obvious supporters, there were passersby in the Joburg CBD who stopped to see what was going on.

The Level 3 Covid-19 regulations allow for outdoor gatherings of only 100 people, although the strength of the wave in Gauteng has seen public health messaging calling on people to stay indoors.

The Johannesburg Metro Police Department also closed four streets around the courts but deleted its tweeted instructions for traffic diversion when asked whether this was legal. JMPD spokesperson Xolani Fihla said no permission had been granted for the rally, but the JMPD closed streets to prevent crowds from gathering. “We will follow up with officers on the ground,” said Fihla in response to questions about why a gathering of more than 100 people had been reported.

Daily Covid-19 statistics show that Pretoria and the Johannesburg inner-city have the highest number of Covid-19 cases. On 23 June, there were 17,493 new cases recorded in South Africa, of which almost 11,000 were recorded in Gauteng. Johannesburg’s hospitals are all full and on divert.

In court, proceedings started with requests for intervention into the proceedings by Nkosentsha Shezi who is the head of the RET Forces faction of the ANC outside the party. It was struck from the court roll with costs, including the costs of senior counsel by the full bench of judges in a ruling read by Judge Jody Kollapen. A similar application for intervention into the case by Zimbabwean businessman Mutumwa Mawere, who was suspended from the ANC in 2012 was also denied by the court with costs.

Mpofu said his client, Magashule had been prejudiced by the ANC’s delay in getting its legal papers filed and argued that the court should not grant the party special treatment in the application of court rules.

Advocate Mpati Qofa, also representing Magashule, objected to the ANC’s lawyers’ documents, arguing that there was a “callousness and hostility” in how these had been prepared as many were irrelevant to the case — document dumping is frowned upon in courts.

“Is your prejudice that you had to read them,” Judge Sherise Weiner asked Qofa.  “No, your honour, we had to read them, make copies, address the court and apply to strike (them) out,” she said.

Meanwhile, outside court, Kwanele Gumbi, a Magashule supporter, said he was showing his support “because I believe that this is a fight perpetrated by those who do not want to see his political career prosper. I believe that this has nothing to do with corruption. There is a concerted effort to get the SG and ensure he kisses his political career goodbye.” Asked why he believed Magashule was being targeted, Gumbi said Magashule was destined for high office. “Isn’t it obvious that he will be president of the country?”

A number of uMkhonto we Sizwe Military Veterans Association members in camouflage uniform were also present. The MKMVA has repeatedly contended that the manner in which the set-aside resolution of the ANC’s 54th national congress was amended was politically motivated. “This creates the impression that there is a targeting of those who have been charged before courts of law, and not all the other categories that are also part of the original resolution,” MKMVA spokesperson Carl Niehaus said. “We believe it’s not in the interest of the ANC. It is also not in the interest of our country or unity in general. And therefore, we have consistently called on the ANC NEC to deal with this matter differently and to accommodate the SG in the current situation he is faced with. We are deeply aggrieved that the NEC has failed to follow that route which we believe if they had done so, and if they also implemented this resolution in its totality rather than this selectiveness,” said Niehaus.

Inside the virtual hearing, the case continued in the afternoon.  DM