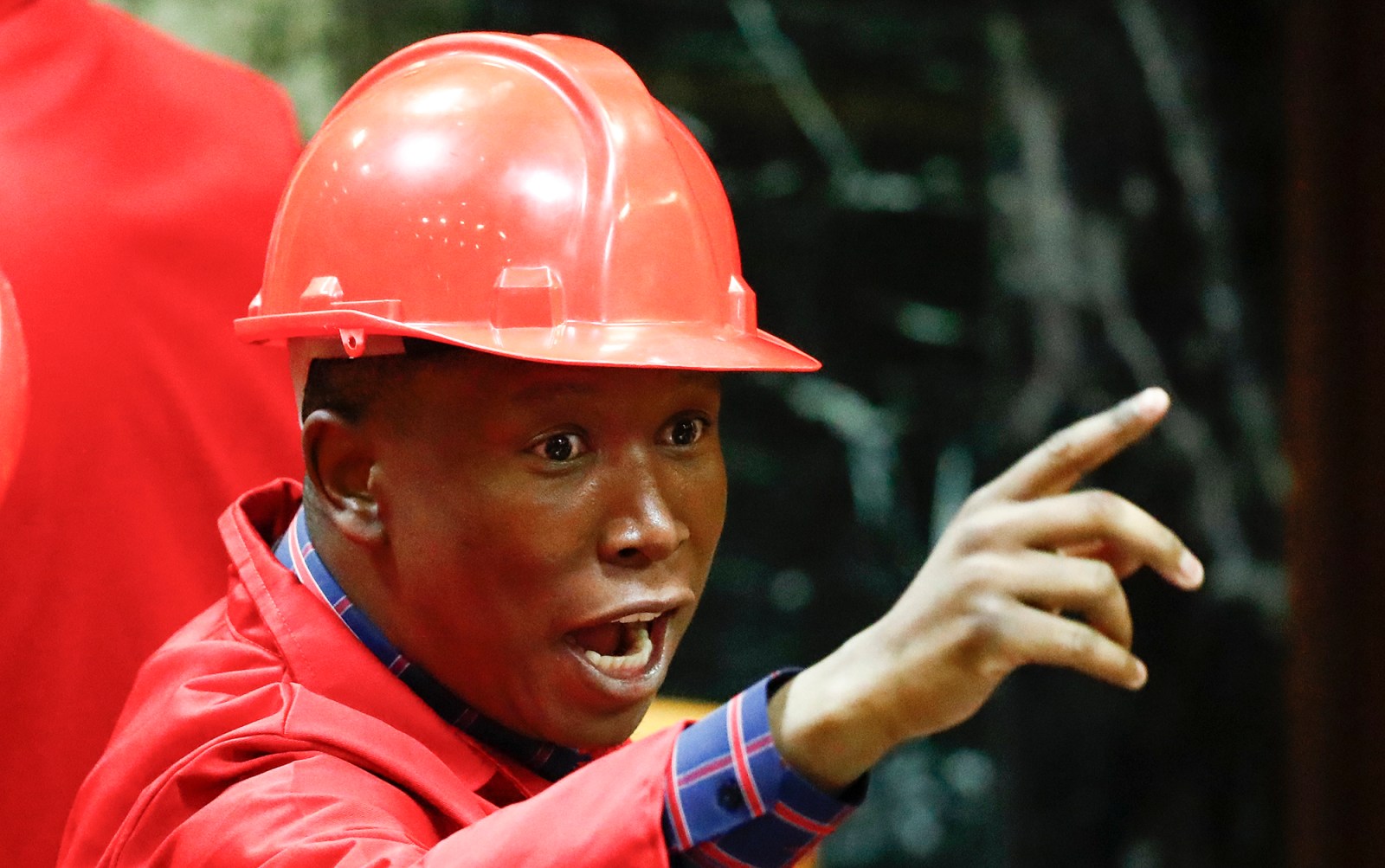 The EFF’s planned march on the SA Health Products Regulatory Authority’s headquarters in Tshwane and its continued threats to senior women staff undermines the work of the regulator and could cost lives.

EFF leader Julius Malema is demanding that the regulator authority approve the Chinese CoronaVac and Russian Sputnik V vaccines within seven days of tomorrow’s (Friday) march, failing which EFF members “will do a sleep-in at the house” of the regulator’s CEO, Boitumelo Semete-Makokotlela. The EFF’s bullying tactics include threatening WhatsApp messages sent to senior women staff at the South African Health Products Regulatory Authority (Sahpra).

Semete-Makokotlela who makes the final decision on authorisation of health products including vaccines, says it’s “unfortunate when institutions like ourselves, who play a critical role in ensuring public safety are being attacked like this”. As a mother she is concerned about the safety of her family and that she, as an individual, is being targeted.

She said the regulator can now begin evaluating the Chinese-developed Sinopharm vaccine after receiving documents from the local applicant for an emergency use authorisation yesterday. This is the third Covid-19 vaccine currently being reviewed.

All applications for approval of vaccines depend on how quickly data on safety, efficacy and quality is provided for review. Semete-Makokotlela says, “It (authorisation) depends on the quality of the information we receive from the applicant. The safety of the public is critical and we cannot cut corners.”

She said the approval process for the CoronaVac vaccine developed by the Chinese company Sinovac is at an advanced stage but “it depends on how quickly the applicant can submit additional data we have requested”. The regulator is also reviewing two applications for the Russian Gamaleya Institute’s Sputnik V vaccine as part of a rolling review, meaning data is submitted and assessed as and when it becomes available. As part of a collaborative review process, a Sahpra representative joined the World Health Organization’s (WHO) inspection of the manufacturing site and facilities in Russia.

Commenting on recent attacks on Sahpra staff, chairperson Professor Helen Rees says “this hammering” of women, in particular, is “unacceptable” and she warns that “If you abuse people enough, you intimidate people enough, (and) you threaten people who are senior officials, who are doing their job fairly and properly, you’re going to lose them, and you’re going to lose an institution.”

Sahpra is an independent body, separate from the Department of Health and the public service, governed by national legislation. It works with other regulators worldwide as well as the WHO in assessing the quality, safety and efficacy of all health products for which approval is sought. It is responsible for monitoring, evaluating, investigating, inspecting and registering all health products, and not just Covid-19 vaccines.

Rees said those who engage in misinformation about the regulator do so at their peril. “In whose interest is it to undermine the drug regulatory authority especially when it has worked so hard to get its house in order and is becoming more effective? … When you destroy a drug regulatory authority things you assume when you go to a hospital and have an anaesthetic, when you have a child who needs an antibiotic, you assume that they (medicines) are going to work and going to be safe, you can no longer assume that.”

She said without regulation anyone can have an idea about the efficacy of a product without any scientific backing and make money out of it. “It’s a field day. It’s an open house. So, you know, at our peril.”

The robustness of regulatory authorities worldwide varies and many low-income countries, including those in Africa, struggle to contend with unimpeded access to over the counter medication as well as counterfeit health products that put people’s health and lives at risk.

Sahpra is considered one of the strongest regulators in the region and has a solid relationship with WHO and other respected regulators.

Significantly, WHO’s chief scientist Soumya Swaminathan said in a webinar this week that South Africa’s selection to host the first Covid-19 messenger RNA (mRNA) vaccine technology hub to scale up production and access to vaccines was partly due to Sahpra’s performance.

“The good thing is South Africa has huge capacity in clinical trials, in R&D (research and development),  and the regulatory agency there is very strong and up to speed with all the requirements. That is why the hub was selected to be in South Africa because we had a number of criteria against which the applications were ranked … and the South African consortium fulfilled many of the criteria that are needed,” she said.

Sinead Delany-Moretlwe, a research professor and research director at Wits University’s Reproductive Health and Research Institute says that globally anti-government, right-wing populist groups, which are not ordinarily associated, appear to have coalesced around and aligned with anti-vaccination groups.

In the United States, she says, public officials — two-thirds of which are women — were targeted and stalked by populist groups or militia in response to masking and stay-at-home orders. Many of these health officials have since left their posts.

Her concern is that with high levels of gender-based violence in South Africa, populist movements that have other interests at heart and not the good of public health may resort to “very aggressive gendered” tactics.

Delany-Moretlwe says public health is not inherently individualistic but about the science of improving the health of the population. “In South Africa, we have a history of making decisions for the public good, such as banning smoking in public places, and relying on public health officials”.

This is especially important with medicines. “Doctors and patients need to feel confident that medicines are safe and effective. During an emergency such as the pandemic we need to be sensitive to the heath context, but we also need to ensure that the integrity of our health institutions is preserved and staff are allowed to do the work that is ultimately aimed at public good… we all stand to gain when public health based on good science is allowed to prevail.”

Rees says Sahpra begins evaluating and assessing data once a local applicant submits a dossier to the organisation.

An applicant can ask for a Section 21 which allows for an emergency use licence and does not require the same breadth and depth of data as for full licensure.

“However, post-marketing is much stricter and the emergency licence is conditional on the delivery of more data.” An example was the roll-out of the Johnson & Johnson vaccine for healthcare workers in a Phase 3b clinical trial. A protocol had to be in place, consent acquired and investigators were asked to monitor particularly for safety signals or concerns.

She said applications should include preclinical or laboratory data based on animal studies. Importantly, for emergency use applications, clinical data from phase one, two and three clinical trials is needed.

An entire administrative division at Sahpra is dedicated to ensuring the required information is submitted. A pre-submission discussion can be requested for all products and has been done for Covid-19 vaccines where applicants are given information for what data is required.

Sahpra set up a separate committee for reviewing clinical trials for Covid-19 vaccines comprising national experts. A Covid-19 vaccine committee has also been established. Rees said manufacturing expertise is particularly important for biologicals such as vaccines which are more complicated “to make than say a simple molecule tablet”.

Critically, she said, all applicants are asked to give data on the efficacy of their vaccine against the Beta variant, which is dominant in South Africa and the most resistant variant to vaccines. If there is no data on this the applicant is encouraged to generate the data. This can be done using local laboratories to assess anti-body responses and neutralisation assessments.

Rees said the regulator needs to be “pragmatic”. “We don’t say that you have not got the data, that’s a line in the sand. If we think there is a possibility the vaccine could give some protection and we can roll it out, we may need a booster later on with a different vaccine. We have seen this with data from the UK with the AstraZeneca vaccine booster with the Pfizer vaccine. Many vaccines may do better if you mix and match them. These options are there for the future,” she said. DM/MC