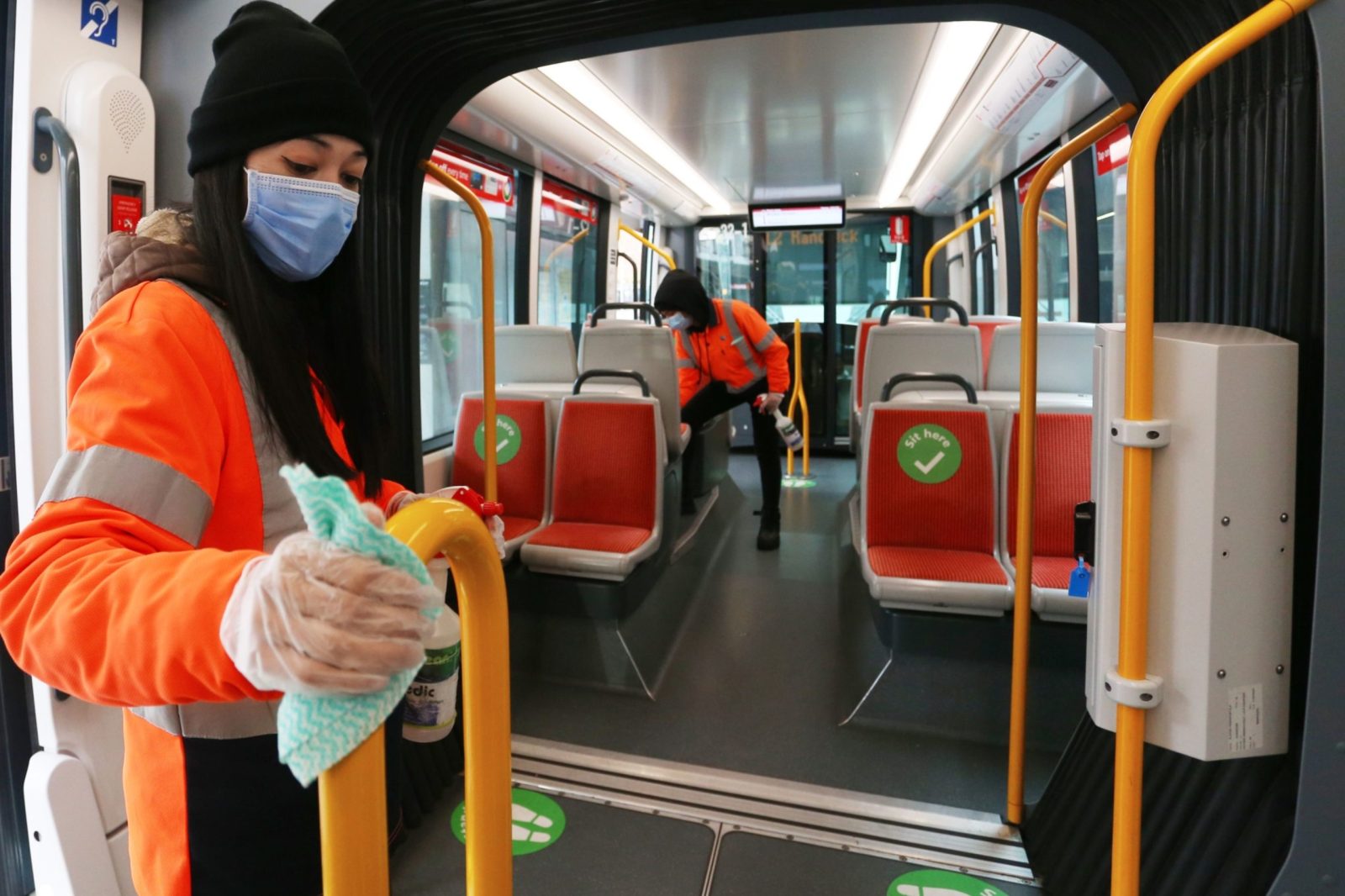 Light rail cleaners are seen wiping down a tram in the CBD on 24 June 2021 in Sydney, Australia. A steady increase in Covid-19 cases in Sydney prompted the government to impose greater restrictions. (Photo: Lisa Maree Williams / Getty Images) 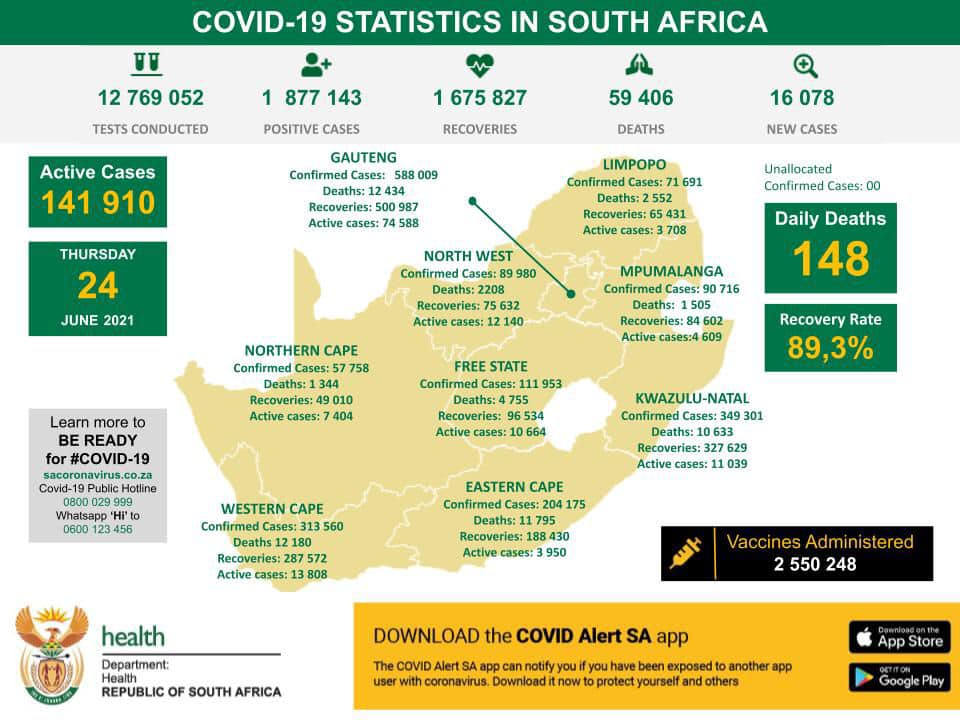 President Joe Biden headed to North Carolina to encourage more Americans to get vaccinated as the Delta coronavirus variant spreads across the world. In the US, Colorado officials blamed the variant for an outbreak in the western part of the state.

The leaders of Germany and France criticised Greece and other tourism-dependent nations for freely accepting visitors who got Chinese and Russian vaccines, giving them access to travel across European Union national borders.

Israel, an early pioneer in vaccination, is delaying its reopening for tourists and is poised to reverse an easing of mask rules after a surge in cases linked to Delta.

President Joe Biden travelled to North Carolina to encourage vaccinations, which are falling short of his goal of getting 70% of US adults a first Covid-19 shot by the July 4 holiday.

Biden plans to visit a mobile vaccination unit in Raleigh, North Carolina, and deliver remarks on the importance of getting vaccinated.

Across the US, 65.7% of people have received at least one vaccine dose, according to the Centers for Disease Control and Prevention. It will take a few more weeks past Biden’s target date for 70% of all US adults to get at least one shot, Jeffrey Zients, Biden’s Covid-19 coordinator, said on Tuesday.

German Chancellor Angela Merkel and French President Emmanuel Macron criticised Greece and other tourism-dependent countries for freely accepting visitors inoculated with less-effective Chinese and Russian vaccines, signalling the possibility of curbs on travel ahead of the peak tourist season.

During a closed-door meeting of European Union leaders in Brussels, Merkel said on Thursday that EU countries such as Greece welcome travellers who got the Sputnik shot, even though it hasn’t been approved by the EU regulators and it’s unclear whether it works against the more dangerous Delta variant. These visitors can then freely move within the EU’s free-travel zone, Merkel told her colleagues, according to officials familiar with the conversation.

It’s another sign of alarm in Berlin and other EU capitals over the spread of more-contagious virus mutations as some EU nations rush to restart tourism.

The UK added Spain’s Balearic islands and Malta to its quarantine-free travel list and said rules will be relaxed for more countries in the summer for people who are fully vaccinated.

The shift is a boost for airlines and the travel industry ahead of the school holidays which begin in July. Bermuda, Madeira, and a number of Caribbean destinations were also added to the list.

EasyJet criticised the relaxation as too cautious, saying “this is still not the safe and sustainable reopening of travel” that Prime Minister Boris Johnson’s government promised. “This limited reopening is not justified by the data,” the airline said in a statement.

Brazil gets three million doses from US

The shipment is part of 88 million doses the US has said it will send abroad, she said.

Brazil has recorded more than 18 million cases and some 507,000 deaths, the second-biggest toll after the US.

Venezuelan received its first doses of Cuba’s Abdala vaccine, according to state television.

Vice-President Delcy Rodriguez was among officials welcoming the shipment at the Caracas international airport. Venezuela expects to receive 12 million doses of the Cuban vaccine over the next few months, he said.

Romania will have to destroy about 35,000 doses of AstraZeneca’s vaccine that expire on June 30 because of little interest from citizens to get the shot. The country has vaccinated about 25% of its population.

Authorities also decided to close 45 vaccination centers because of low interest, though they are also trying to boost the number of mobile centres so they can reach rural residents, according to Valeriu Gheorghita, who runs the government’s vaccination task force.

The Delta variant first identified in India is raging in rural western Colorado, which was largely spared in the early stages of the coronavirus pandemic, a state official said. The proportion of Colorado cases due to the Delta variant is estimated to be greater than 50%, Rachel Herlihy, state epidemiologist, said in a statement issued by the state emergency operations centre.

“We are taking extra precautions and turning to the CDC for additional support to make sure we know how and why the delta variant is spreading,” Herlihy said.

Masks back in Israel, off in Hungary

Israelis can expect to start donning masks again and the country has put off the reopening of its borders to foreign tourists, after its bid to return to a post-Covid normal was hobbled by a surge in infections linked to the highly transmissible Delta variant.

New cases were down to the single digits in mid-June, but this week topped 100 for three days straight. Most of the new cases have been unvaccinated children and people returning from abroad. Some of the sick had been fully vaccinated with the Pfizer-BioNTech vaccine.

Hungary, another country which was a vaccination front-runner earlier, is going in the opposite direction. Authorities in the eastern European country will end a requirement to wear masks indoors once 5.5 million people have received at least one dose of the vaccine, Cabinet Minister Gergely Gulyas said. People will no longer be required to show vaccination certificates in restaurants, hotels and public baths, Gulyas said at a briefing in Budapest. He said Hungary will reach 5.5 million vaccinated by next week.

Singapore said it plans to give a first Covid-19 vaccine shot to most of its population by July after securing more supplies, flagging the prospect of looser travel and social-distancing rules for inoculated residents.

The government will accelerate vaccinations from June 26 as deliveries have been brought forward, according to a statement from the Ministry of Health on Thursday. The city-state will also open vaccinations to permanent residents and long-term pass holders aged 39 years and younger from July 2, and is extending a priority window for Singaporeans in the same age group by an additional week.

Tokyo cases creep up before Games

Coronavirus cases in Tokyo are creeping up with less than a month to go to the Olympics. The capital found 570 new cases on Thursday versus 452 cases the same time last week. Tokyo came out of a State of Emergency to control the virus on Sunday, but still has some restrictions in place, mainly on restaurants and bars.

The Covid-19 Delta variant may account for a quarter of new cases in some parts of Italy, a startlingly rapid rise for the virus mutation, according to a study.

The variant, first detected in India, has led some countries to rethink plans to reopen their economies. As much as 25% of all cases in some Italian regions are linked to the variant, up from just 1% on May 18, daily Corriere della Sera reported on Thursday, citing Pietro Forestieri, president of Ceinge-Biotecnologie Avanzate institute in Naples.

Germany expects Delta to be dominant

The more-contagious Delta variant of Covid-19 will be dominant in Germany within weeks and that makes it even more important for people to get vaccinated, according to Chancellery Minister Helge Braun.

“We want the highest possible level of immunity in the population because that will dictate what our autumn will be like,” Braun said in an interview with ARD television. Those who are inoculated won’t be subjected to lockdown, but people who choose not to will have to get themselves tested regularly, he added.

Germany has fully vaccinated just over a third of its population, and more than 52% have received at least one Covid-19 shot, Health Minister Jens Spahn said in a tweet. DM