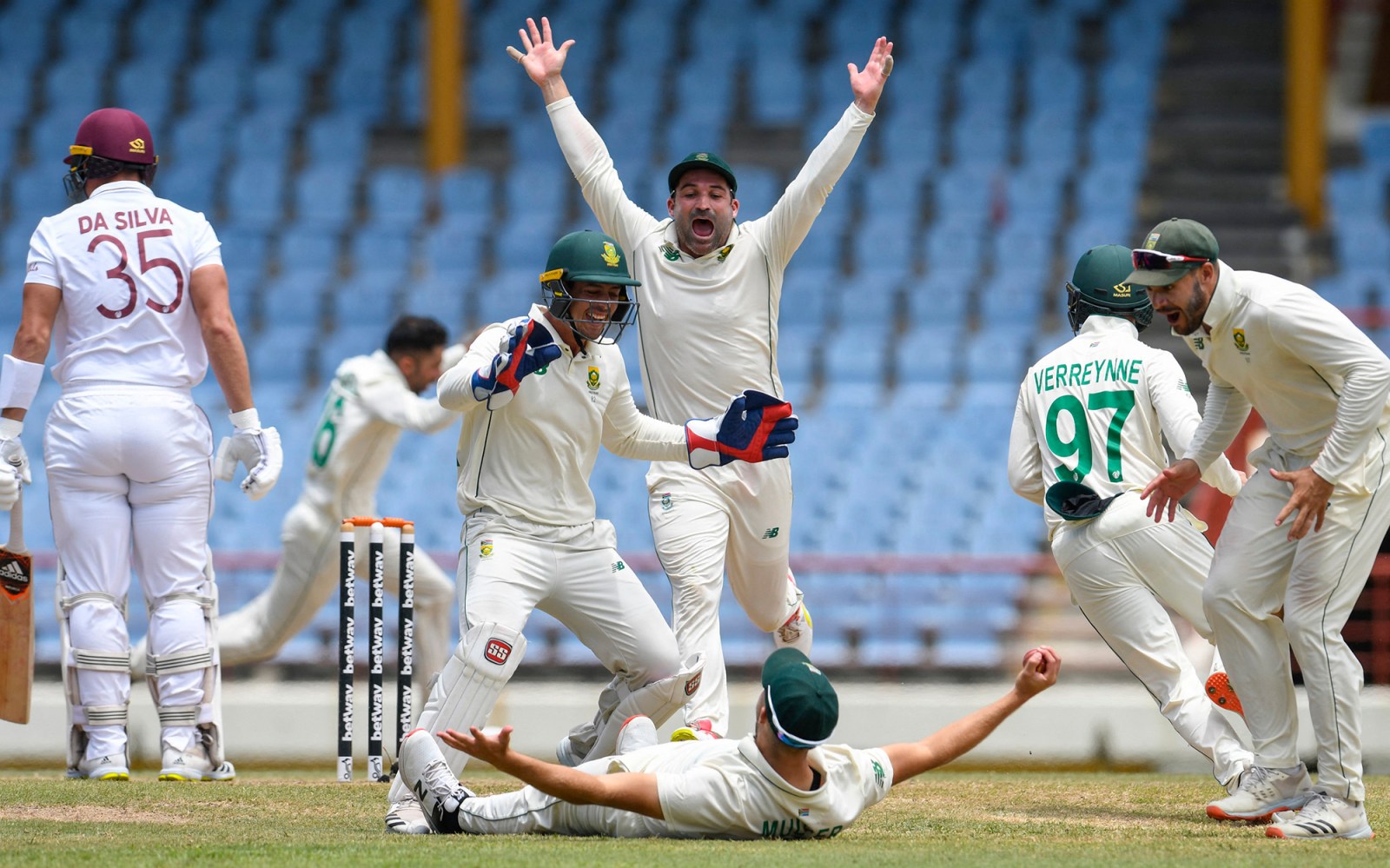 The Proteas’ 2-0 win over the West Indies in the Caribbean was their first away series victory in four years, achieved on the back of excellent performances from old hands.

Shortly before two South African rugby players were burning themselves around a fire pit in Ireland, the Proteas cricket squad sat around a fire in Pretoria. No cricketers were harmed in the incident — at least not immediately.

The only damage that emerged from the Proteas’ “fire pit chat”, was inflicted on the West Indies in the Caribbean several weeks later thanks to ruthless performances over seven days of cricket.

Amid the crackle of the fire, the sparks that drifted off into the night and the flickering flames, skipper Dean Elgar spoke in the only way he knew how — straight and without frills. What was said didn’t win the series, but it set a tone.

On Monday the Proteas sealed a 2-0 series win over the West Indies in St Lucia with a 158-run victory in the second Test. It followed an innings and 63-run first Test victory and gave South Africa their first away series win since New Zealand in 2017.

After four long years and four series’ defeats on the road, the rebuilding Proteas, in their first series under Elgar, rediscovered some bite.

“We sat around the fire in Pretoria, where the new captain asked a couple of questions about where we are and where we were going and where we want to be,” coach Mark Boucher told the media after wrapping up the second Test.

“Quite a few honest chats came out there, as they do around a South African fire at night. The guys bought into a process that Dean wanted to align his tenure with. You were either on the bus or not on the bus. Thankfully everyone decided they were on the bus.

“It doesn’t only work when you’re on the field. That’s where you get results, but a lot of effort has to be put in behind closed doors — the way we train, the way we talk, the language, the confidence, the way we speak to each other. That’s probably where it started — at that fire.”

Elgar wanted his players to agree to play “boring” cricket if the situation demanded it. Boucher uses a different word — “disciplined” — but semantics aside, the skipper got his message across.

“Test cricket is all about being able to absorb pressure at certain stages and then being able to apply it,” Boucher said. “Our guys are becoming smarter at choosing those moments — when to absorb and when to apply.

“If you want to call that being boring at certain stages of the game, yes, you have to be. But what’s impressive for me is that there have been stages in this series where we could drive the nail in, and we did that. It’s good to see the guys respond to the language a leader is sending out.”

Elgar, fast bowler Kagiso Rabada and left-arm spinner Keshav Maharaj have all been around for longer than five years and it was the two senior bowlers who stood tallest in the West Indies.

Maharaj took nine wickets in the series including a historic hat-trick in the second Test while Rabada weighed in with 11 wickets and a valuable 40 with the bat as well.

Throw in Quinton de Kock’s 237 runs in three innings at an average of 118.5 and Rassie van der Dussen’s composed and unbeaten 75 in the second innings of the second Test and there were some positive batting signs too.

Fast bowler Lungi Ngidi’s first Test return of five for 19 in the first innings and Anrich Nortje’s four for 35 in the same innings set the Proteas on course for victory. It was an all-round effort, complemented by some superb slip catching throughout.

There were several highlights such as De Kock’s unbeaten 141 in the first Test, but Maharaj’s hat-trick stood out for its significance and most crucially, for its timing in the context of the series and the match.

The West Indies were digging in and threatening to make a game of the second Test shortly before lunch on the fourth day. There was plenty of time left to reach the target of 324 and after the loss of two early wickets, the home side looked settled.

But all that changed Test cricket’s equivalent of a blink of the eye as four quick wickets tumbled in five overs thanks to Maharaj. From 90 for two the Windies were left reeling at 107 for six when lunch was taken. The match and the series were effectively over and after the break, Maharaj mopped up two more to claim five for 36 to add to his two for 47 in the first innings.

Eventually, the West Indies were dismissed for 165 in their second innings to give the Proteas a 158-run win to complete a thoroughly professional Caribbean job.

Maharaj rightfully deserves the plaudits for his rare achievement because in the space of three balls he tilted the balance of the match and the series from a “probable” Proteas win, to a definite victory.

Maharaj accounted for the hitherto unmovable Kieran Powell, who tried a slog sweep and was caught at deep midwicket by Nortje for 51. His innings was an exercise in patience and application until that moment.

Jason Holder came to the crease and prodded at a clever ball, which pitched on a perfect length and turned slightly. The ball caught the inside edge flipped onto the pad where an alert Keegan Petersen snaffled the catch.

The hat-trick ball, by Maharaj’s own admission, was not a great delivery. But great deliveries often do not end with a wicket. This one pitched just outside leg stump and posed no danger to the newly arrived Joshua Da Silva.

But first balls, combined with innings pressure can do strange things to players. Da Silva tried to tickle the ball down legside and only managed to feather an edge. Wiaan Mulder, with feline reflexes, continued his excellent slip fielding throughout the series taking a sharp diving catch to allow Maharaj to become only the second South African to record a Test hat-trick.

Maharaj was also the first in the post-isolation era to achieve the feat. According to CSA statistician Andrew Samson, there had been 110 previous hat-trick attempts by South African bowlers since Geoff Griffin’s feat at Lord’s in 1960, and all had failed. No 111 was lucky for South Africa this time.

“I probably could have bowled a much better ball than that, but full credit to Wiaan for plucking that catch,” Maharaj said. “It was a superb reaction catch and whatever Wiaan wants to eat or drink tonight, it will probably be on me.”

Good result but don’t get carried away

Enjoying the win and the performances are understandable, but Boucher warned about getting carried away with this result against modest opposition.

“When you’re winning the team’s always going to be smiling. The guys really want to start playing for each other again, and I think we saw that,” Boucher said.

“But how do you sustain that? You can’t become the No 1 team in the world overnight. This is a long process that we’ve got to keep working on from a skill perspective, being smarter, from a confidence perspective. I’m looking forward to the time where we get put under pressure to see how we respond. That’s where we can judge where we really are.

“When you’ve got a young team, the best place to learn to play cricket is in foreign conditions. Although we didn’t win in Pakistan (where the Proteas lost 2-0 in January and February) a lot of our youngsters learnt good lessons there. We came here and they knew these conditions were going to be tough.

“This is how you develop players; by playing in different conditions. That’s where they start learning about their games and making slight adjustments that are going to hopefully turn them into world-class players one day. Foreign conditions can only improve you as a player.”

As can long talks, deep into the night, around a fire under African skies, apparently. DM