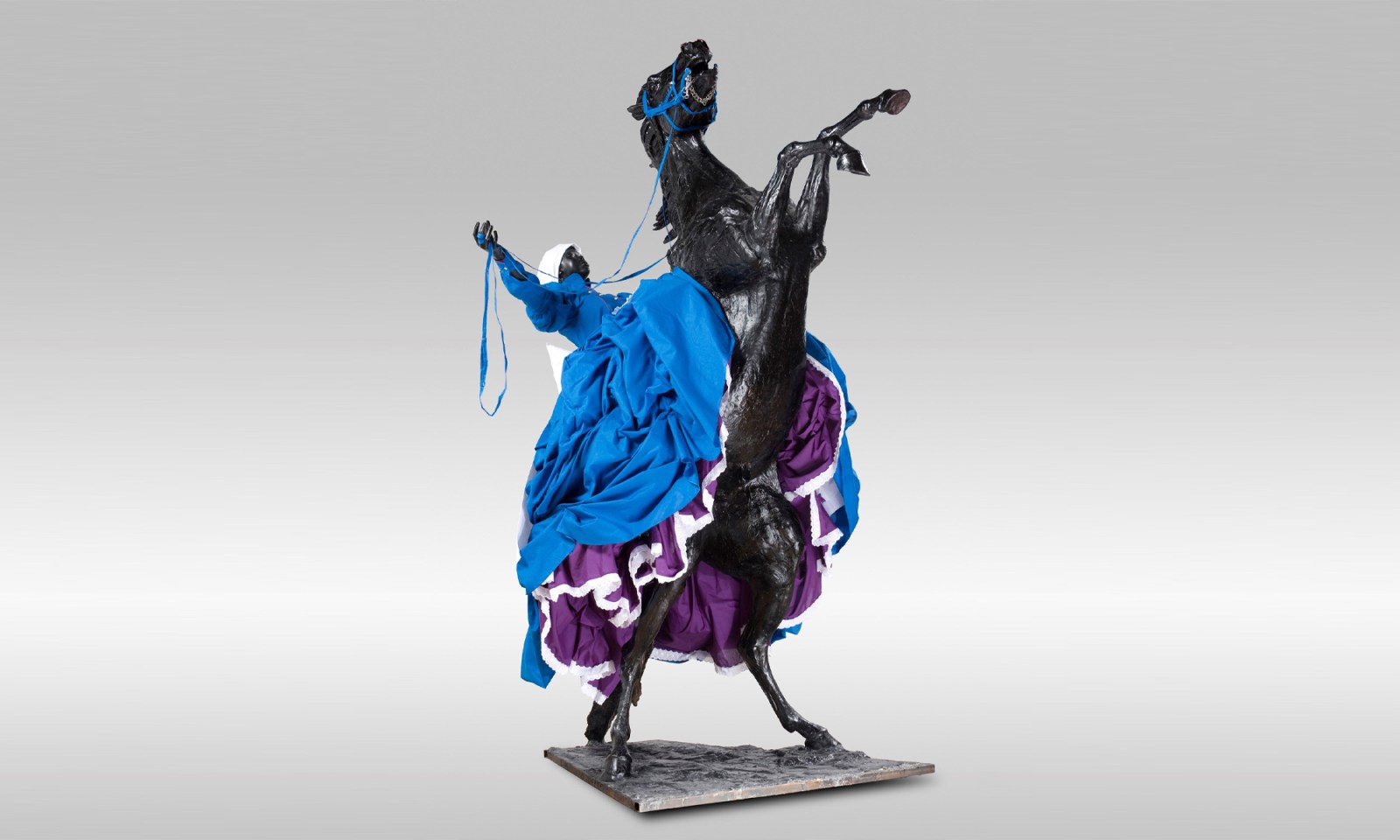 With each article on Maverick Life Art School, we take a closer look at an individual piece of iconic South African art. This week we consider the undeniably iconic ‘The Reign’.

The Reign is one of several sculptures created between 2008 and 2010 by Johannesburg-based artist Mary Sibande. It is part of her series, Long Live the Dead Queen. It features “Sophie”, a life-size fibreglass sculpture of a woman modelled on the artist’s face and body, riding a life-size fibreglass stallion, while dressed in what looks like a Victorian-style dress.

The sculptures featured in the series all show Sophie in different poses, always with her eyes closed, in various iterations of the Victorian-style blue dress, a colour often associated with overalls or workwear in South Africa. In contrast to its grand design, the dress is always worn with an apron and a “doek”, such as those worn by domestic workers, as part of the classic “maid’s” uniform. Three generations of Sibande’s family, including her mother, her grandmother and great-grandmother, were domestic workers.

With ‘The Reign’ one is in awe of how Sophie is able to wrestle the creature. Sophie looks as if she is leading an army about to charge into battle.

In an interview with art magazine Apollo Sibande explains Sophie: “I wanted to pay homage to the women in my family who were all maids. When you look at the history of South Africa, women didn’t have a choice. They were discriminated against, firstly because they were women, and secondly because they were black… Sophie is inspired by my great-grandmother… Her masters couldn’t be bothered to learn her African names, so they just called her ‘Elsie’. During apartheid, it was compulsory for a black child to have a Christian name, hence my name, ‘Mary’. ‘Sophie’ was born from this law, as a way for me to stop this story from going stale.”

Sibande has also been unequivocal that her use of the character of Sophie and the history that accompanies it is about celebrating, rather than soliciting pity. As written by Artthrob: “My work is not about complaining about apartheid, or an invitation to feel sorry for me because I am black and my mothers were maids. It is about celebrating what we are as women in South Africa today, and for us to celebrate we need to go back, to see what we are celebrating. To celebrate, I needed to bring this maid.”

As with the other sculptures in the series, Sophie as Sibande sculpted her in The Reign is in a powerful pose that is typically not associated with domestic workers, and her eyes are closed. A purple underskirt peeks out below her dress, hinting at what is to come. Over the following decade, Sibande continued developing Sophie in several sculptures and installations. Each body of work is defined by the use of a dominant colour. Long Live the Dead Queen was followed by The Purple Shall Govern, which made use of the colour purple in reference to a practice by the apartheid-era police, who would spray protesters with purple dye to mark them.

What learned minds say about Sophie and ‘The Reign’

In the 2013 book Africa and beyond: arts and sustainable development, artist and lecturer Jessica Foli contributed a chapter titled “Socio-Cultural Aspects Of Clothing: The Recreation of an Imagined Reality in Mary Sibande’s Long Live The Dead Queen”, in which she wrote:

“With The Reign one is in awe of how Sophie is able to wrestle the creature. Sophie looks as if she is leading an army about to charge into battle. Sophie is in constant battle between the real and the non-real. There is a conflict between the reality of her circumstances and the aspirations she has for herself. Tension is also created by the voluptuousness and excess of the gowns that are in opposition with the doek and the apron, which Sophie wears. It is the element of the doek and the apron which brings Sophie back from her dream world to the reality of the present, a present that she fights and refuses to acknowledge by keeping her eyes closed.”

This inability to perform tasks, ironically, becomes a marker of status: a figure dressed as such would have to be waited on, her inaction indicating her position in the hierarchy.

In her review of Sibande’s solo exhibition Long Live the Dead Queen in 2009, Lisa Allan wrote for Artthrob: “The ‘servant’ traditionally is conceived of as an invisible, sightless, deaf and mute figure to those she serves. She has no individuality, and one of the ways this is realised is through the uniform. The uniform literally covers the body but at the same time covers the clothing of the ‘maid’ that might identify her as an individual who has made particular sartorial decisions. Sibande’s ‘maid’s’ uniforms, however, have been extended and remodelled into lavish and voluptuous dresses… The extravagance of the dresses disables the figures from easy movement, let alone to be able to perform the work of a ‘maid’. This inability to perform tasks, ironically, becomes a marker of status: a figure dressed as such would have to be waited on, her inaction indicating her position in the hierarchy.”

Of that same exhibition, to which The Reign would be added the following year in 2010, art critic and Maverick Life contributor Mary Corrigall wrote: “Her sculptures and photographic artworks depicting the domestic worker aren’t by any means sociopolitical products employing, say, the documentary genre that tends to evoke pathos, anger, shame and humiliation in the viewer. Their theatrical quality confidently roots them in the realm of fantasy, thus obviating those predictable knee-jerk emotional responses which ultimately have a didactic goal and underscore the domestic worker’s role as victim. Sibande’s work grapples with transcending this actuality, which not only has ramifications for the domestic worker but has significance for all of apartheid’s victims, perpetrators or beneficiaries – if the domestic worker is able to liberate herself, we can all be free from the past…

“The clothing that Sibande has developed for this exhibition is central to her expression. For it is through the uniform that she is best able to manipulate the identity of the domestic worker, transplanting her not only into a bygone era but into the persona of the white European colonial – her mistress. So while the domestic worker appears to have transcended her station, she is similarly trapped in the same paradigm that fixes her as a cleaner. Her liberation is illusionary and seemingly impossible; even when she dreams and aspires for an alternative existence, she is locked into the madam/slave dichotomy. She can’t think outside of it even when she isn’t limited by reality.”

Where can we witness ‘The Reign’?

The sculpture was acquired by the Iziko South African National Gallery, where it remains on permanent exhibition in Cape Town. DM/ML