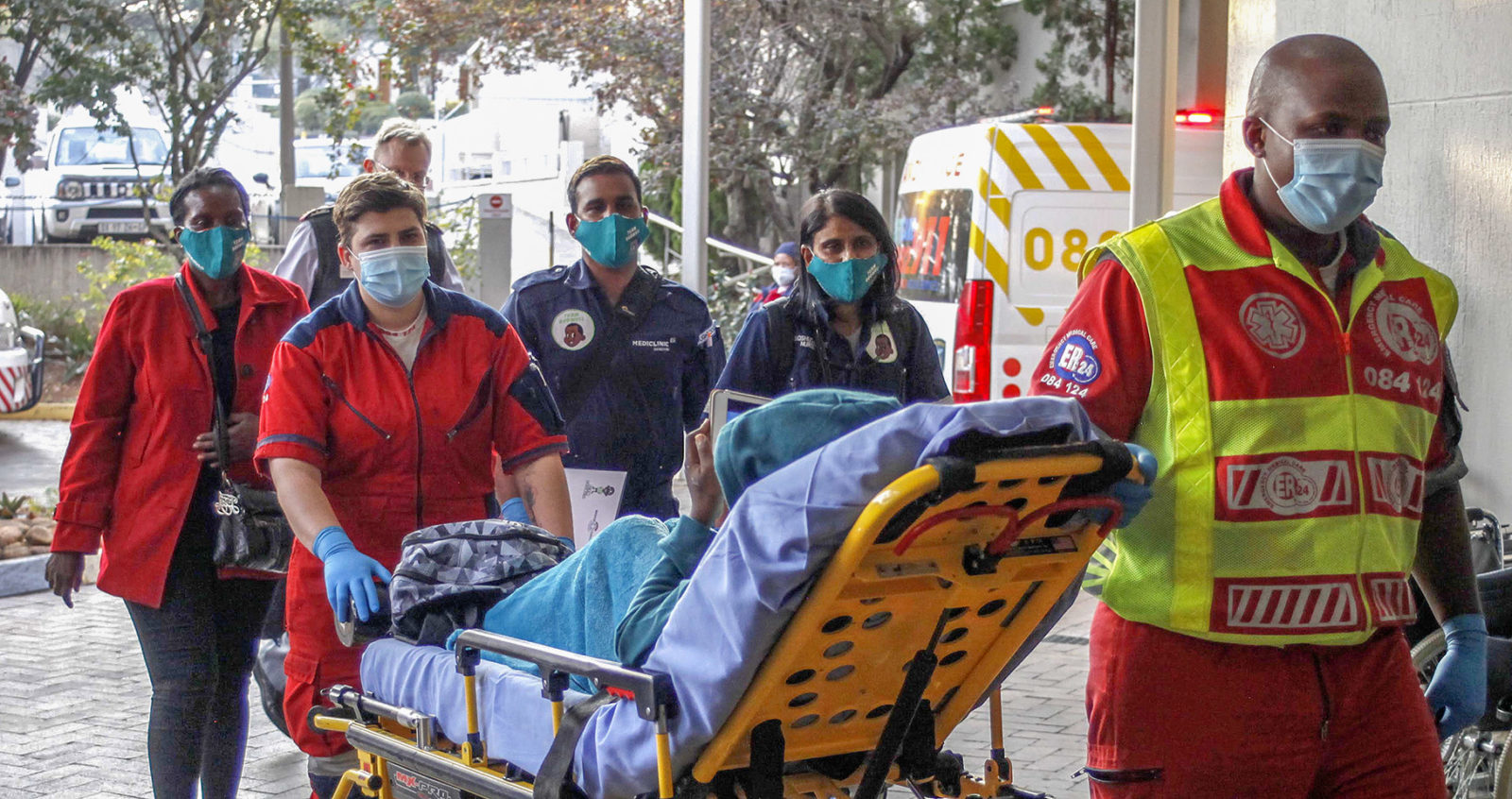 Rodwell Nkomazana (9) arrives at the Mediclinic Sandton in Johannesburg from Harare’s Parirenyatwa Hospital in Zimbabwe to undergo reconstructive surgery. He was attacked by a hyena at an all-night church gathering outside Harare on 2 May 2021. (Photo: Oupa Nkosi)

The kindness of strangers got Rodwell Nkomazana here. After weeks of fundraising, planning, hope lost and hope gained, the nine-year-old boy who was mauled by a hyena near Harare on 7 May arrived in South Africa.

Rodwell arrives. Rolled into the entrance of Mediclinic Sandton in Johannesburg on a stretcher, Rodwell Nkomazana is met by excited medical staff with stickers and T-shirts that say “Team Rodwell”.

There is an air of excitement and importance as the staff, lined up on either side of the entrance hall, sing the national anthem.

At first unaware of the magnitude of the situation, Rodwell, only nine years of age, is playing on trauma nurse Maqshuda Kajee’s iPad Mini. From under his green hoodie and the bandages wrapped around his head, Rodwell gives a curious look at the people surrounding him.

Exhausted from a long day of travelling to and from Zimbabwe, and from weeks of campaigning to get Rodwell here, sitting at the hospital’s cafeteria, Kajee and medical evacuation expert Dr Sayuren Moonsamy tell Daily Maverick that without the public’s support, they wouldn’t be here today.

Every bit of advice given, donation sent, prayer made, or news shared has contributed to getting Rodwell to South Africa.

“It’s just very overwhelming to see the amount of love that people show so readily, without even knowing him,” says Moonsamy, who manages the Emergency Unit at Mediclinic Sandton.

“And even when we arrived here, I think I tried not to make eye contact with anyone because it was just a matter of trying to hold tears back. And it’s been such an emotional experience from the beginning when Maqshuda brought me on, to the point of now finally handing him over.”

Up until this point, Rodwell had been receiving care at Parirenyatwa Hospital in Harare.

“I have to mention that the medical crew in Zimbabwe did a phenomenal job of keeping him alive and preserving him so well,” says Moonsamy.

Rodwell was brought to South Africa after a team of top surgeons volunteered to perform life-critical reconstructive surgery to rebuild his jaw, nose and cheeks.

Renowned plastic surgeon Dr Ridwan Mia, who is part of the pro bono team, told Daily Maverick, “Essentially, if you look at it, the middle part of his face is completely missing, including most of his upper lip and his nose, part of his forehead, and he’s lost his left eye.

“If he wasn’t to have that reconstructed… I think we would be hearing about this terrible story of a child who probably will not face society again. And that was the big key, that we can get him a face that he can walk around in public with and still feel and be as normal a child as possible.”

Alongside Mia, paediatrician Kim Barnard will play an instrumental role in caring for Rodwell. Kajee recalls how when the rest of Rodwell’s team were taking pictures, Barnard was still in the paediatric ward making sure he was comfortable.

Kajee and Moonsamy woke up at 2am on Saturday to fly to Zimbabwe to accompany Rodwell and his mother, Shamiso Mabika, on a commercial expatriation SA Airlink flight from Harare to Johannesburg.

It was Rodwell and Mabika’s first time on a plane. Kajee says that despite the excitement of being at an airport for the first time, what struck Rodwell most was a clothing store that sold soccer kit. Rodwell loves football and his favourite team is Manchester City. On the plane, Rodwell was awestruck by the clouds and how small everything looked below him, but when Kajee gave him a toy car his attention soon went to that.

“We were very concerned from the beginning about putting him on a commercial aircraft, about walking him through OR Tambo, which is such a busy area, because we didn’t want to draw attention to him. We also didn’t want to make a spectacle of him. It’s a very sensitive topic.

“But it was water off his back. He owned it,” says Moonsamy.

“We love this child without even knowing him,” says Kajee,  “and I just want to make his journey so dignified.”

“It was the most beautiful thing to watch,” says Moonsamy. “Like with any nine-year-old, you place a device in front of him and he’s completely soaking that up.

Along with having the ability to take things in his stride, Rodwell also has a keen curiosity.

“You know, everyone understands how truly special he is, but I don’t think he grasps how extraordinary he is to have lived through what he did. It’s absolutely phenomenal. You know, the innocence of a child, and Rodwell’s so, so remarkable in that sense. He still has that lust for life, he still has that excitement when he encounters anyone and anything.

“Today the world got a glimpse of who he is. Up until this point, it was a big banner that we were flying. Now there’s a name, there may not be a face that we can all see — which is good in that regard — but there’s someone behind it.”

Along with the reconstructive procedures, Rodwell will need months of speech therapy, occupational therapy and psychotherapy to help him speak properly again, eat by himself again, be able to play football with his friends once more and gain the independence any young boy deserves to have.

“I don’t think he grasped the magnitude of what had to go on in order to get him here,” says Moonsamy, “and I don’t think he can truly appreciate the long journey he still has to come. Which is a good thing. Because… we live in the moment, we deal with today’s problem now and we move on. As opposed to fearing and wondering and doing the thing that adults do best, which is to overthink. And that’s why kids are so phenomenal.”

Along with the medical team who have volunteered their time and services, there is an overwhelming sense that it’s the small acts of kindness from virtual strangers and everyday people that kept this mission alive.

“We just want to thank the public,” says Kajee, “whether it was a R10 donation, sponsoring the clothing and merchandise, a good word, pointing us in the right direction. It didn’t have to be monetary. Lots of people behind the scenes that said, you know, maybe you can do x, y, z. The little prayer that somebody said in the middle of the night — it all contributes.”

“That positivity,” says Moonsamy, shaking his head. “I can tell you now, there were moments when it seemed like there was no hope. And you would get these messages on social media saying, ‘No, we’re so proud of what you guys are doing. Please keep at it, we’re holding thumbs. I’m making a contribution.’

“That positivity that everyone put on there? That’s what woke us up this morning. That’s what got us out of bed every day.”

Rodwell is set to have an assessment procedure on Monday, 21 June, and from there a reconstructive procedure will be planned. There’s a long road ahead for him, but there’s no doubt that there are many people around him making sure he’ll get to where he needs to be.

Donations can be made to:

*Kajee intentionally supplied photos where you cannot see Rodwell’s face. “We love this child without even knowing him. And I just want to make his journey so dignified. I just want his dignity maintained.” DM/MC