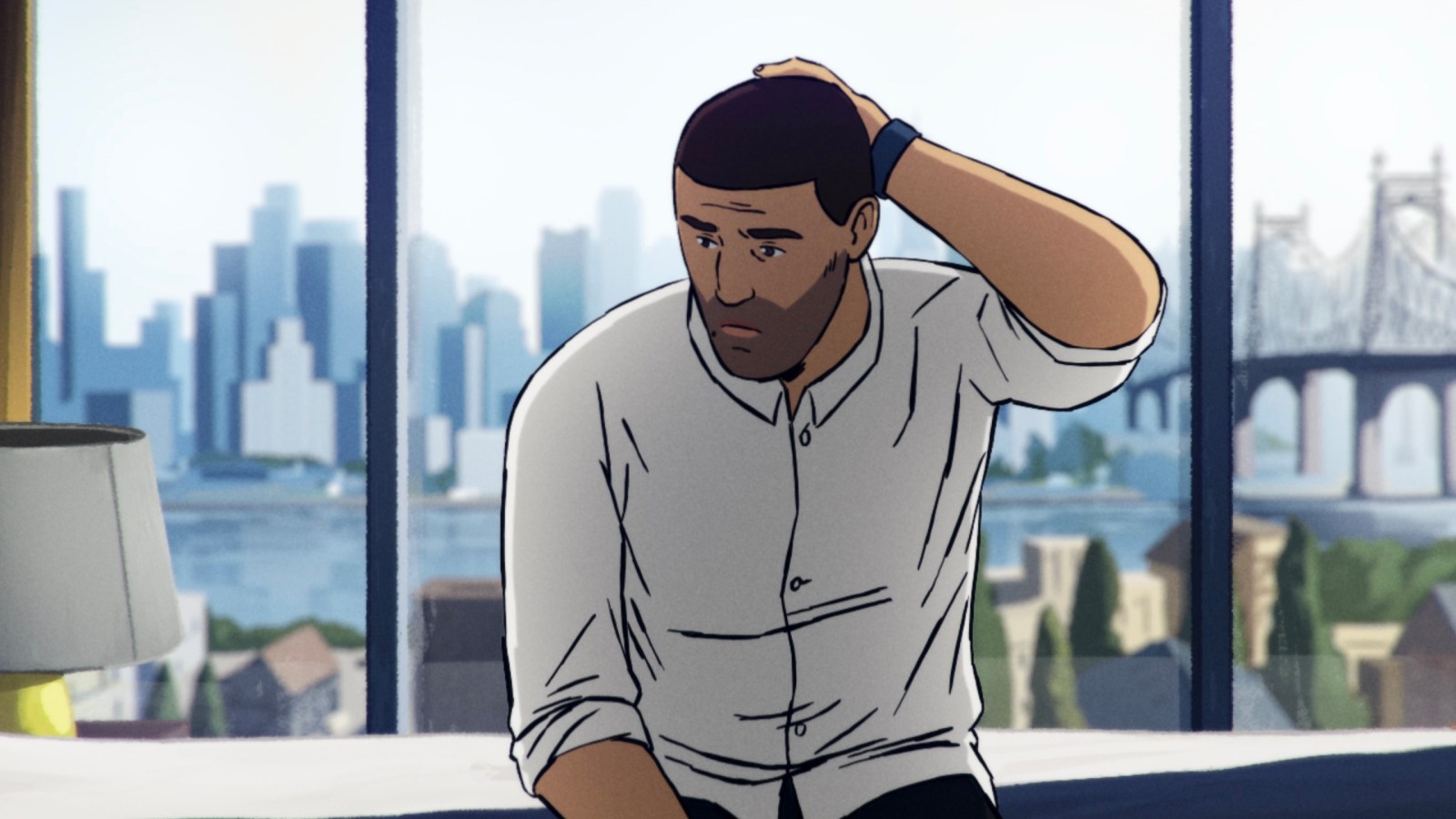 ‘Flee’ is an impeccably animated documentary about a boy’s escape from war-torn Afghanistan to Denmark, a punishing journey spanning several countries and many years. Its intimacy and tact won it the World Cinema Documentary Grand Jury Prize at Sundance 2021.

Amin (whose name has been changed to protect his identity) agreed to tell his remarkable story for the first time through a series of informal interviews with his close friend from school, director Jonas Poher Rasmussen.

These highly intimate interviews are overlaid with textured stop-frame animation, which is usually illustrative and occasionally abstract and poetic. The frame rate is quite slow – a stylistic compromise that prioritises attractive imagery over the perceived smoothness of movement.

While Amin’s present-day self (and most of the film) is drawn statically with crisp lines and muted tones, faded and emotional memories are sketched expressively with loose lines and vivid colours. These more artistically abstract scenes are often the most emotionally potent.

The film is also scattered with real-world archive footage of Kabul and the political conflicts of Afghanistan in the late 1980s.

After the Mujahideen seized power in Afghanistan, Amin’s father was imprisoned as a threat to communist rule, and disappeared three months later. Fearing religious violence from the Taliban and the conscription of Amin’s older brother, the family fled to Moscow, at a time when Russia was almost as unstable as Afghanistan, a year after the fall of communism.

Amin describes the circumstances that made it unbearable for them to stay in Russia and impossible for them to leave. Without the proper papers, they were unable to move freely through the streets for fear of being extorted by the police, so they were confined to a dingy apartment in a corrupt post-communist Moscow, able to do little else but watch Mexican telenovelas. With no other options, they turned to human traffickers to help them escape to Europe, and that’s when things get heavier.

The film is not always harrowing. Flee actually begins quite exuberantly, introducing us to Amin as an eccentric, joyful little boy, revelling in attention as he dances through the streets of Kabul in his sister’s nightgown to the soundtrack of Take On Me by A-ha. Admittedly, one chuckles reluctantly and chokes a little on the bittersweetness of this playful scene, sensing that this adorable rebellious behaviour represents future conflict; because Amin is gay.

The pressures of Amin’s teenage years as a refugee are entwined with his struggle to come to terms with his homosexuality as an Afghan. “In Afghanistan, homosexuals didn’t exist. There wasn’t even a word for them,” he says. He recalls, as a teenager, asking a Danish social worker for medicine to cure him. Growing up with so little, family was all Amin had, but because of his homosexuality he lived in constant fear of being discovered and rejected by them.

Quite delightfully, the most joyous moments throughout the film (which are usually paired with Amin’s choice of American 80s cheese-ball music) revolve around Amin’s homosexuality. Rather than solely depicting Amin’s sexuality as an unwilling curse (which would have been a fairly obvious choice) Rasmussen receives Amin’s descriptions openly and acknowledges their complexity.

Survival-story documentaries are sometimes criticised for sensationalism and capitalising on their subject’s misfortune. Rasmussen could never be accused of that. The interviews between Amin and Rasmussen appear to have been profound moments of reflection and healing for Amin, and the inclusion of these moments is sensitive to Amin’s unique story and identity as an individual, rather than a generic martyr of homophobia and the global refugee crisis.

Documentaries break the fourth wall all the time, but Flee takes it further than most would dare. You might say it breaks the narrative ceiling. Rasmussen “dirties” the edit, utilising that humanising documentary technique of letting the viewer in on behind-the-scenes footage that they don’t expect to be privy too. We see Rasmussen, we see outtakes, we see (with consent) what Amin talks about when he gets too emotional to carry on the interview.

This highly intimate, fractured style of storytelling is not just to satisfy our curiosity as a viewer – we are granted this special access to help us to understand how hard it is for people like Amin to share their stories.

The trauma of having been forced to flee from persecution remains years afterwards, complicating Amin’s ability to connect with people. He fights the shame of having come from such desperation, the fear of his own past, and the reflex to bottle it up (lest its utterance breathe life back into horrible memories).

One of the most powerful scenes in the film is an abstract sequence animating the disorientating experience of refugees being trafficked across the Baltic Sea in a pitch-black freight container. Another benefit of the intimacy of Amin’s interviews is that during these gripping scenes we are prevented from being so swept up in the drama that we dissociate it from the real people it happened to.

Flee is a visceral and absorbing adventure worth going on. Amin’s raw, earnest interviews are truly moving. South Africa receives refugees from all over Africa, many of whom escape through even more perilous means than Amin and his family.

Flee impresses upon us that the journey isn’t over once you’ve successfully fled – it’s not even over if you manage to lift yourself out of poverty and gain citizenship in a new land. Even after finding a loving fiancé in Denmark and achieving financial success, Amin still struggles to face and overcome his past trauma and allow himself to embrace newfound security and freedom. DM/ML

Flee is only currently available in South Africa at limited screenings at the Labia theatre (18, 19 and 20 June) through the Encounters South African International Film Festival 2021. Tickets can be bought here. The film is scheduled to be released on other platforms later in 2021.