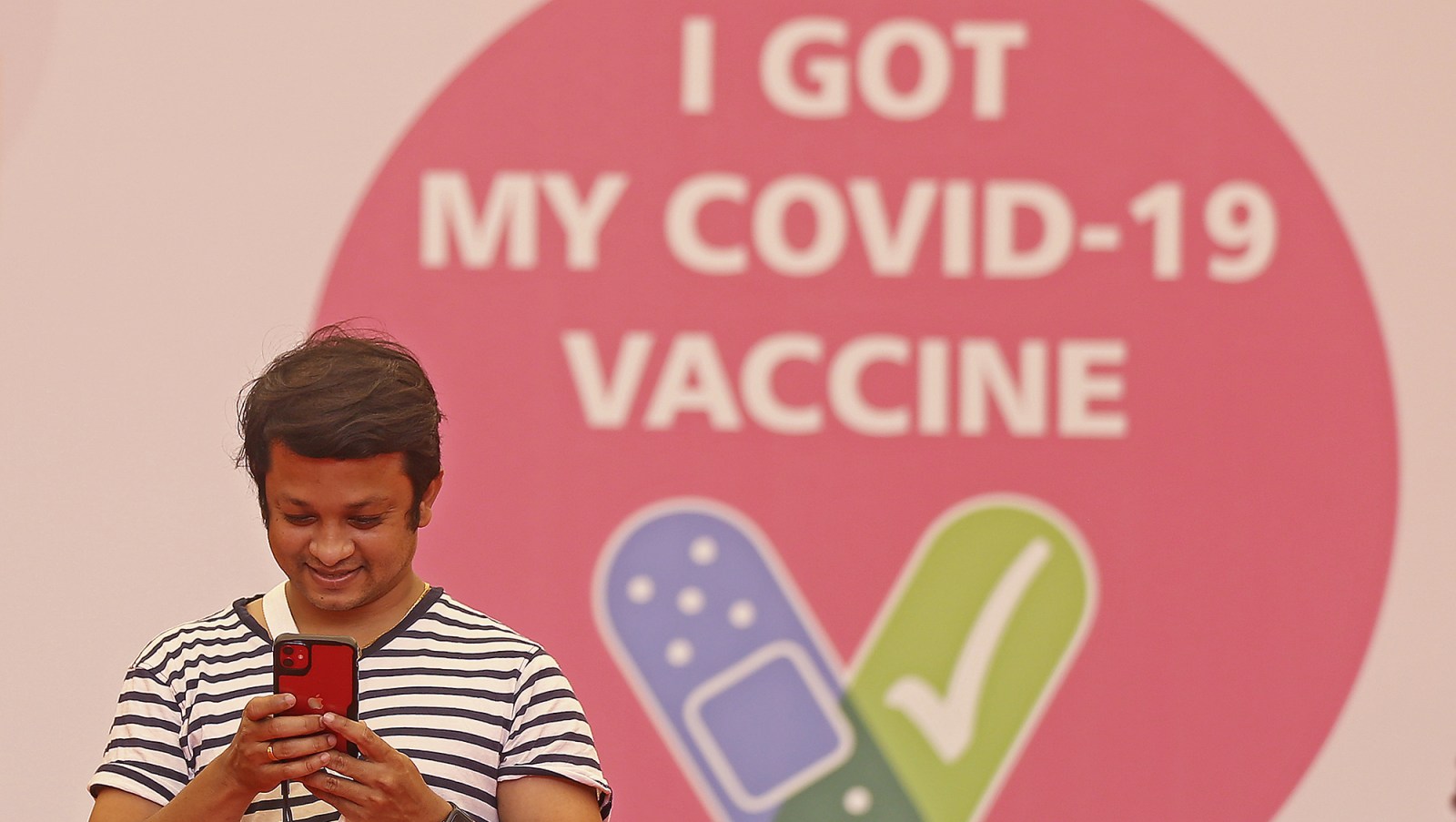 A man after receiving a shot of the Covid-19 vaccine during the vaccination drive for sports persons in Bangalore, India, on 10 June 2021. (Photo: EPA-EFE / JAGADEESH NV) 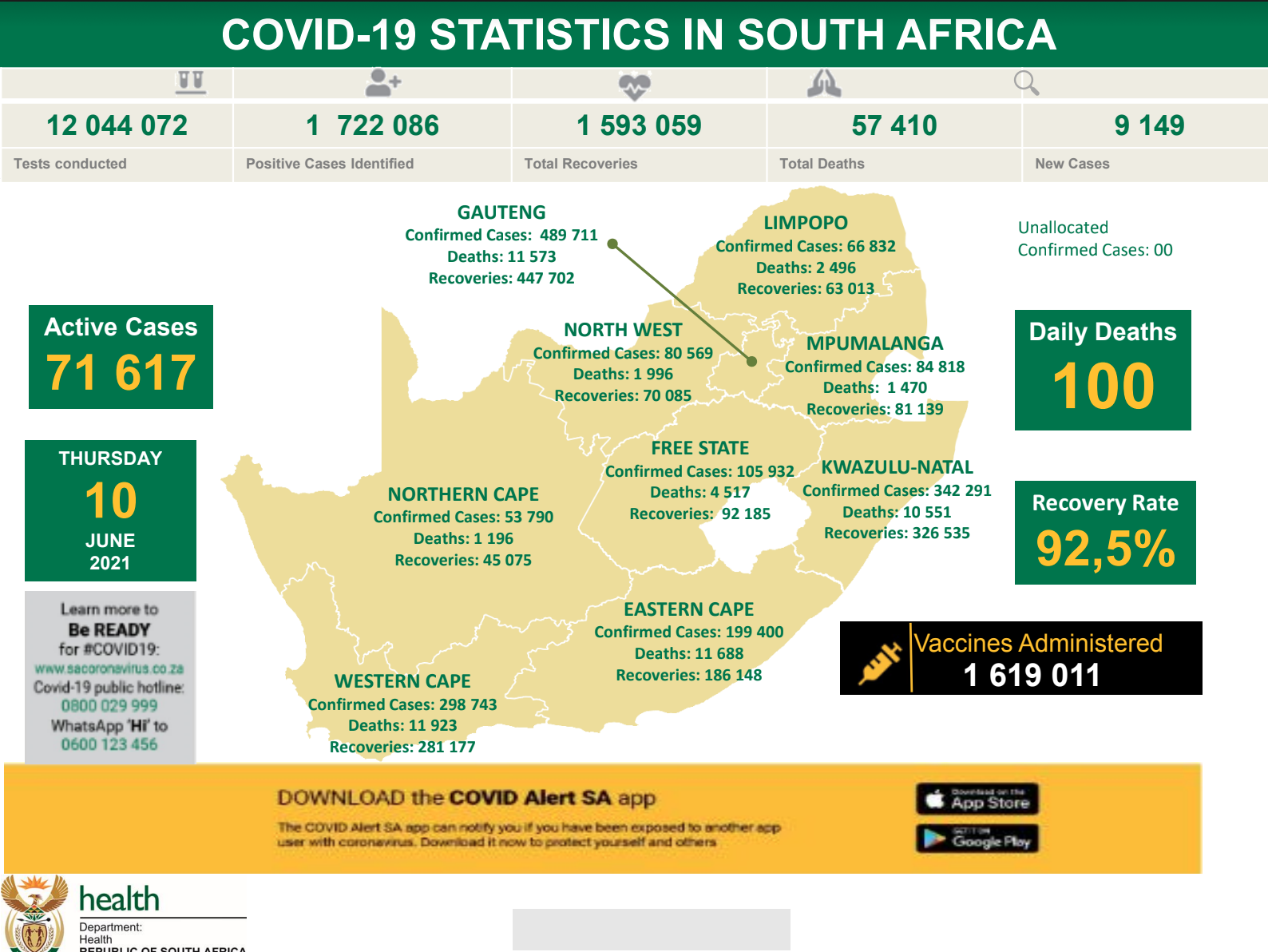 US President Joe Biden is preparing to join other Group of Seven leaders in a campaign to end the Covid-19 pandemic by distributing at least one billion extra shots to poorer nations by late next year. He announced the US will begin shipping a half-billion doses of Pfizer vaccines to countries in “dire need” in August.

US public health advisers will meet to discuss a potential link between Covid-19 shots that use messenger RNA technology and heart inflammation. Moderna filed for US emergency-use authorisation of its vaccine in adolescents.

Prime Minister Boris Johnson is poised to delay the final stage of pandemic lockdown easing in England. Chile announced a full lockdown in the capital city of Santiago and surrounding municipalities as the number of available hospital beds hits dangerously low levels.

The pandemic’s impact is causing emergency shortages at blood banks in eastern Kansas and western Missouri, the Topeka Capital-Journal reported on Thursday. In the Kansas City metropolitan area alone, an estimated 25,000 blood donors have yet to return since the onset of Covid-19, the newspaper reported.

Chile announced a full lockdown in the capital city of Santiago and surrounding municipalities as the number of available hospital beds hits dangerously low levels and new cases remain high.

Santiago’s Metropolitan Region will go into full lockdown starting on June 12 at 5.00am local time, Health Ministry officials said on Thursday. The Health Ministry reported that the seven-day average of new cases remains above 7,000 per day, and that there are only 30 intensive care beds available in Santiago, a region with a population of about eight million inhabitants.

President Joe Biden announced the US will begin shipping a half-billion donated doses of Pfizer coronavirus vaccines to countries in “dire need” in August, making good on a promise to lead the global campaign against the pandemic.

Biden said on Thursday the US purchase and donation of Pfizer’s shots would be the largest of any single country so far, and that the vaccines would come “with no strings attached”– veiled criticism of Russia and China, which he’s accused of using vaccines as leverage in their foreign policy.

“We know the tragedy. We also know the path to recovery,” Biden said at Tregenna Castle in St Ives, UK ahead of a Group of Seven summit. “The key to reopening and growing economies is to vaccinate your people.”

Earlier on Thursday, US officials said the Biden administration would slash in half its $4-billion commitment to the Covax international vaccine consortium to help pay for the purchase of the Pfizer shots.

Cameroon has used just 12% of its Covid-19 vaccines, with only 68,000 people receiving at least one dose due to widespread mistrust in the shots.

The central African nation, which has received just over 590,000 vaccines, is struggling to inoculate its population due to hesitancy, Minister of Public Health Manaouda Malache said by phone on Thursday. The country of 25 million people had planned to vaccinate 812,000 by July 31, he said.

US public health advisers will meet to discuss a potential link between Covid-19 shots that use messenger RNA technology and heart inflammation after hundreds of vaccinated people experienced a condition called myocarditis.

The Centers for Disease Control and Prevention’s Advisory Committee on Immunization Practices will gather on June 18 to discuss an increase in reported cases of the condition, particularly among adolescents and young adults. Covid vaccines made by Moderna and partners Pfizer and BioNTech use mRNA technology.

Johnson & Johnson’s vaccine can be kept in a refrigerator for 4½ months, extending the shot’s shelf life by 50%, the US Food and Drug Administration decided. As doses languish amid a slowing US immunisation campaign, concern has been growing that some shots could spoil before they are used.

Prime Minister Boris Johnson is poised to delay the final stage of pandemic lockdown easing in England, in a blow to hospitality and entertainment businesses that want to see social-distancing rules dropped.

Johnson is due to announce on Monday whether he will lift remaining curbs, imposed in January to contain a wave of infections, on June 21.

The Japanese government is considering lifting a Covid-related State of Emergency in most areas, including Tokyo and Osaka, as planned on June 20, the Mainichi newspaper reported.

The government may maintain strict virus measures for about a month until the Tokyo Olympics kick off, on July 23, even after the State of Emergency is lifted. An official decision will be made in the second half of next week.

Delta variant in 91% of UK cases

UK Health Secretary Matt Hancock said on Thursday the Delta variant, first identified in India, accounts for 91% of new cases in the country.

Earlier, a UK study showed cases had more than doubled in the past week. The data comes less than a week before Prime Minister Boris Johnson is due to decide whether to further ease lockdown rules. Cases are higher and increasing faster in the unvaccinated population, according to the study.

Moderna filed for US emergency-use authorisation of its Covid-19 vaccine in adolescents. If approved by the US Food and Drug Administration, it would be the second vaccine approved for this age group after Pfizer and BioNTech received authorisation for use of their shot in teens in May.

Both vaccines are now being studied in younger children.

African nations need to secure at least 225 million coronavirus vaccine doses by September to meet a global goal of inoculating at least 10% of the continent’s population, a World Health Organization official said.

“This will really require a massive effort as our early projections indicate that without a significant boost in the availability of vaccines, only seven African countries will achieve this goal,” WHO regional director for Africa Matshidiso Moeti said in an online briefing on Thursday.

Earlier, the Africa Centres for Disease Control and Prevention said the continent is heading for a third wave, with the number of new cases rising 26% in the week through June 6.

Goldman Sachs employees in the US have to report their vaccination status by noon Thursday, The New York Times’ DealBook reports, citing a memo sent to employees this week who have not yet communicated their status.

Bankers won’t have to show proof of vaccination but will be asked to provide the date they received shots and the maker of the vaccine.

New confirmed cases in South Africa surged by 8,881 on Wednesday, the biggest jump in infections in about five months. The nation also reported a positivity rate of 16.5% on tests conducted, according to the National Institute of Communicable Diseases.

“The increased number of tests and cases, and increased positivity are all evidence of the predicted third surge in Covid-19 cases.”

Denmark to phase out curbs

Danish lawmakers agreed to end most of the country’s restrictions by September 1. From Monday, Danes will be free to stop using face masks in all situations except public transport, according to a statement. Restaurants and bars will be free to extend opening hours and all schools will return to normal capacity and schedules.

The country will use a so-called corona-passport so people can show they’re either immune or have tested negative within the past 96 hours.

India reported a record daily Covid-19 death toll of 6,148, after a state revised its tally. Bihar’s Health Department on Wednesday said the coronavirus had killed 9,429 people, about 72% higher than its previously reported death toll, confirming suspicions that the devastation in the Asian nation has been far worse than official numbers show.

The US plans to buy 500 million doses of Pfizer’s coronavirus vaccine to share internationally as President Joe Biden prepares to join other Group of Seven leaders in a campaign to end the pandemic by distributing shots worldwide.

As Biden and other G-7 leaders gathered for the start of their summit in the UK, their staff were putting together a document that outlines a plan to end the Covid-19 pandemic by December 2022. At the summit in Cornwall, the presidents and prime ministers will pledge to deliver at least one billion extra doses of vaccines over the next year to help cover 80% of the world’s adult population, according to a draft communique seen by Bloomberg News.

Pfizer and BioNTech will provide 500 million doses at no profit. DM