From the Flats to the Floral Kingdom: How Manenberg girls are becoming champions for fynbos 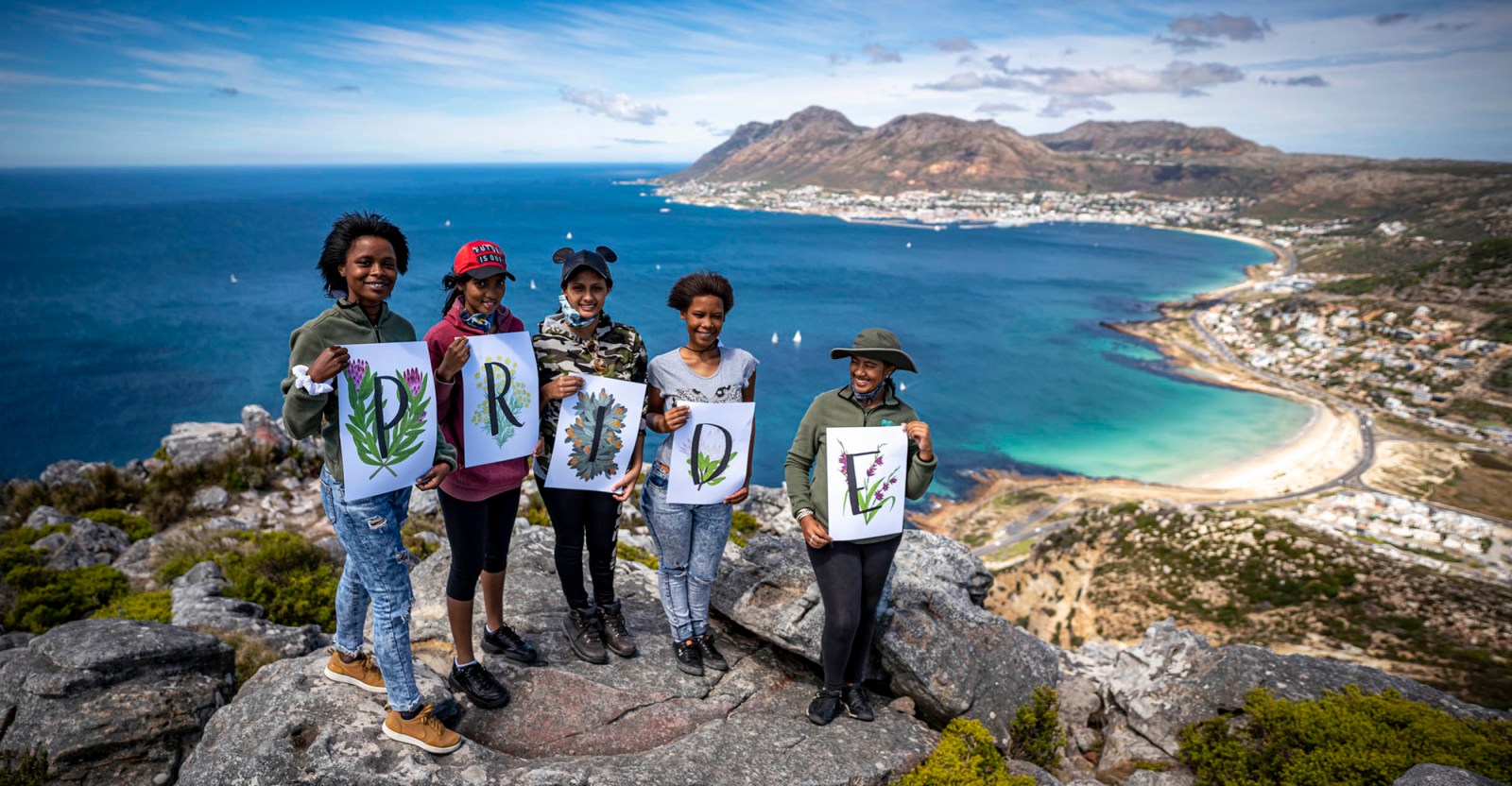 The astounding diversity of the Cape Floristic Kingdom flourishes a few kilometres beyond the Cape Flats, but for young women living on these brutal streets, these could well be a universe apart. Here is how the Table Mountain Fund is trying to bridge this gap.

Jacques Marais is one of South Africa’s most respected adventure photojournalists and has been writing about and photographing extreme sporting events around the world for more than three decades. He regularly contributes feature articles to a range of local and international publications, has authored more than a dozen sporting and outdoor guidebooks and is an award-winning Getty photographer.

Somewhere in Manenberg, a girl wakes up. The night-time quiet is punctuated by the hollow, distant barking of feral dogs. In the street outside, the guttural growl of a six-cylinder engine rumbles, reverberating between low-slung houses illuminated by the incandescent glow of failing fluorescent street lamps.

The vehicle revs once, twice, and then all goes quiet as the engine is cut. Wan light seeps in through the metal bars of the girl’s bedroom window and she pulls the blanket tight around her body as she listens for the sound of footsteps stomping up the concrete stairs.

A man’s voice barks out an order, curt, hard-edged. Doors slam and the car starts up again and slowly fades away as it disappears into the chaotic streets spider-webbing in the direction of Gugulethu. The girl closes her eyes, waiting for sleep to return. Or morning to arrive, whichever may come first.

I’ve never lived in Manenberg, but have visited there often enough to understand how fear and insecurity can leach into every aspect of your daily life — as in the slice-of-life imagined above — here in the heart of the Cape Flats. This suburb dates back to the apartheid era and mushroomed when Cape coloured families were forcibly removed from the Cape Town city centre to be settled upon these barren plains.

This travesty happened way back in 1966 and the area’s population has since grown to more than 52,000 residents. Row upon row of semi-detached houses and project apartments (colloquially known as “korre”) coalesce into a hard-edged and uninviting urban tableau, with redeeming or aesthetic features few and far between.

Most of the “Daring Disas” girls I met a few weeks ago call Manenberg home. Now, they were strolling with me up a fynbos-covered peak, backdropped by the serene beauty of False Bay. Across the shimmer of the ocean — if you looked carefully — you may have been able to spot their hood in the haze suspended over the Cape Flats, but our concentration was fully focused on our immediate surroundings.

All around us, the Cape Floristic Kingdom flourished in its bewitching glory. March lilies had just started unfurling their cerise candelabra blooms from bulbs set beneath the sandy Cape Fold mountain soil. Restios sedges swayed in the autumn breeze, with sugarbush and silver tree proteas crowding the skyline.

Cape sugarbirds frolicked amid a profusion of flora, with the group of girls crouched around the fragile bloom of a watsonia tabularis. This crimson lily is but one of the more than 6,000 plants endemic to the Western Cape, where a bewildering 9,000 species bloom within the smallest — yet by far the richest — of the six floral kingdoms on Earth.

Table Mountain alone boasts 2,200 unique plants, eclipsing the UK’s meagre 1,300 species, and the Daring Disas were as entranced by the natural grandeur as I am every time I walk there. (Maybe this is a good time to explain that said Daring Disas are not a rare plant species, but rather a group of pupils linked to the NGO, BRAVE Rock Girl).

This educational initiative is supported by the Table Mountain Fund, a capital Conservation Trust Fund launched by the legendary Sir Edmund Hillary. The project is just one of their Pride Programmes focusing on efforts to involve schools throughout the whole of the Western Cape in fynbos conservation.

“We believe that if individuals are given the opportunity to immerse themselves in fynbos, they will gain a better understanding of the uniqueness of this diverse floral kingdom, and their appreciation and love for fynbos will grow,” explains Table Mountain Fund CEO Kerry Maree.

By investing R4.5-million into their Pride Programme, Maree aims to build a community that shows pride in their natural heritage and who will in turn become custodians of the Cape Floristic Kingdom. The Daring Disas is just one of the Pride groups benefiting from this substantial financial investment.

Project coordinator Lorna Houston describes how the girls join weekly conservation workshops at the Edith Stephens Nature Reserve near Philippi, taking part in hands-on sessions to learn about plant propagation, natural heritage, biodiversity and litter clean-ups. This really highlights the willingness of these young women to become custodians of the Cape Floral Kingdom.

The Daring Disas initiative aims to both empower and inform groups of resilient South African girls, teaching them to champion not only their own rights, but also those of their immediate natural environment. Weekly workshops help them gain the skills and confidence to become decision-makers and to speak up to protect the environment and themselves.

In retrospect, my hike up a Cape Fold hill with the BRAVE Rock Girl group was about much more than educational opportunities. It is in nature where life’s “Big Picture” snaps into focus, and being in this tranquil and organic space allowed these young women to reflect on their own lives and to start building on future skills.

Psychologists label outdoor experiences such as these “wilderness therapy” and, if you are in search of a natural space within which to contemplate life’s questions, you can’t beat the Cape Floristic Kingdom. Time slows down; the stresses and pressure of the rat race fall away; and while you breathe a mix of fresh air and beneficial phytoncides, life begins to make sense.

Sir David Attenborough states unequivocally that “the future of all life now depends on us” as climate change and global warming continue to escalate. Leading conservation experts concur, as does Maree: “It is key, however, that organisations such as the Table Mountain Fund ensure that conservation efforts reflect the priorities of people on the ground, delivering tangible benefits and meaningful community upliftment.”

Personally, I know deep inside my bones that this holds true, as these organisations fight on the front line to conserve our fynbos. Table Mountain, the Peninsula ranges and the wider fynbos habitat allow me — and millions of other visitors every year from around the world — to reconnect with nature in a space of unmatched tranquillity.

The Daring Disas were a case in point. I observed how they gradually eased into their natural surroundings — and into themselves — to find their balance and introspection. In time the group dynamics changed as they bonded around the small natural discoveries each girl made, and it was beautiful to witness these small shifts in attitude and perception.

You have no excuse to not support initiatives such as these. The mountains are calling, and you ignore them at your peril. Go there and be present, whether atop a rugged peak, or next to a still, dark-water pool. Like these girls, you are sure to find your breath and balance once you immerse yourself within the fynbos, and this experience is guaranteed to re-energise your mind, body and spirit.

“Don’t let anyone nick your pride,” one of the girls, Miche, wrote when I asked the group to each explain how they viewed the project. “It’s a small word, but the meaning is valuable… maybe I can say it like this: for any woman to have her pride is like always having a shining diamond in their lives.”

Her words underpin my truth, because every time I hike on a fynbos trail, I feel surrounded by a veritable treasure trove overflowing with the gems of nature. DM/OBP

From the Flats to the Floral Kingdom: How Manenberg girls are becoming champions for fynbos