Fact-checking the Fauci emails: A lot of fuss about nothing 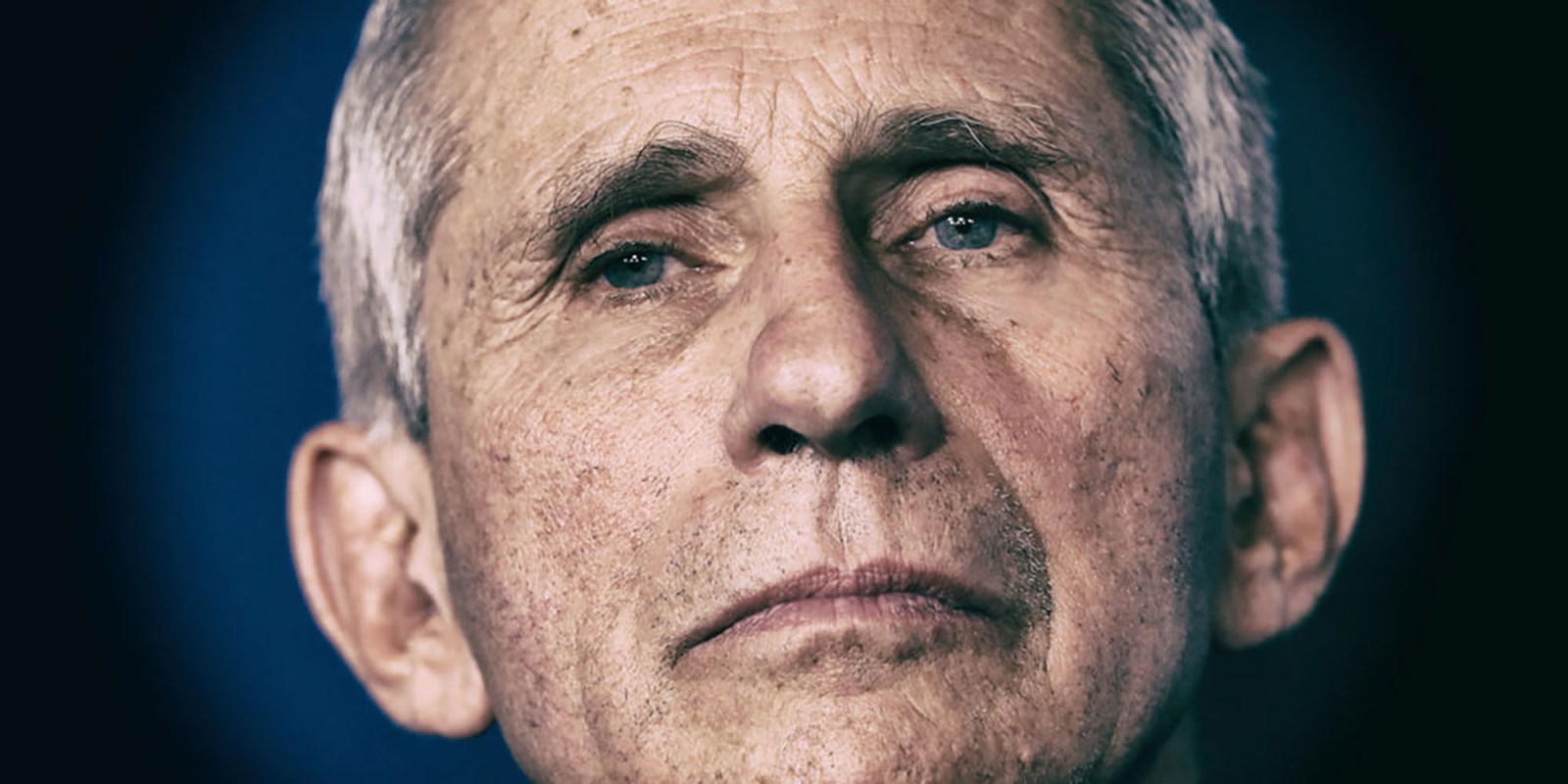 Dr Anthony Fauci, director of the US National Institute of Allergy and Infectious Diseases and chief medical adviser to the US president. (Photo: Chip Somodevilla / Getty Images)

The release of thousands of emails by chief medical adviser Dr Anthony Fauci to the US president has caused a frenzy among conspiracy theorists globally. In SA, cartoonist Jeremy Nell’s ‘analysis’ of the Fauci emails has been widely shared. But every single claim made by Nell is patently false.

The Covid-19 pandemic has been a golden age for conspiracy theorists, those who harbour grudges against authority, those who feel themselves unfairly excluded from power and those with an interest in presenting themselves as marginalised truth-tellers.

This has been as true in South Africa as elsewhere, where a number of individuals have established blossoming second careers as pandemic and lockdown sceptics or contrarians. Holding such views seems to correlate closely with support for former US President Donald Trump and, in many cases, with sympathy towards nonsense like QAnon and “white genocide”.

It would be preferable to ignore such ideas, except that the advent of social media means that they are spread with disturbing ease to credulous people.

This is the case with the social media noise surrounding the recent release to the Washington Post and Buzzfeed of thousands of emails directed to and written by the US’s top infectious disease expert, Dr Anthony Fauci.

Right-wing Americans have jumped on the emails as containing “proof” of a number of Covid-19-related conspiracy theories, and their South African counterparts have dutifully followed suit — even if some admit to not having actually read the emails.

In reality, what the emails show is an 80-year-old scientist working day after day into the early hours of the morning to try to give appropriate guidance on the US’s response to the pandemic. Throughout the emails, which date from February 2020, Fauci is bombarded with correspondence from nutty strangers and fearful members of the public. He does his best to respond to all with calm courtesy.

The emails also show a scientist grappling with the reality of a new virus about which absolutely nothing was initially known. At the outbreak of the pandemic, so much was uncertain: whether the virus could survive in the air and on surfaces, how exactly it could be spread and what measures one should sensibly take to protect oneself.

Fauci had no special, secret information that the rest of the public lacked at this time. He was dependent on the research being carried out at breakneck speed by epidemiological colleagues — and as those findings emerged, the official advisories and warnings were shaped.

But this has not stopped expedient or ignorant commentators from claiming that the emails offer evidence of a number of alt-right shibboleths: primarily that the coronavirus was indeed created in a Chinese lab and that the wearing of masks is completely ineffective.

In the South African context, cartoonist Jeremy Nell was given a platform by BizNews to share his laughably inaccurate “analysis” of the Fauci emails. Nell’s article on the subject has been distributed and endorsed by, among others, the African Christian Democratic Party and Professor Tim Noakes.

Yet every single claim made by Nell is false.

Claim: “White House staff are actively discussing an exit strategy for Dr Anthony Fauci following the release of his emails”.

Fact: False. The only source for this claim is the Twitter account of Jack Posobiec, a right-wing internet troll. Fauci is still very much in position, some five days after Posobiec tweeted this false allegation. Posobiec is known for his anti-Semitic views and has been dubbed “The King of Fake News”. He was active in promoting the conspiracy theory that top Democrats were running a child sex ring out of a Washington pizzeria.

Fact: False. The book — Expect the Unexpected: Ten Lessons on Truth, Service, and the Way Forward — is still scheduled for publication on 2 November, its publisher, National Geographic, has confirmed. Although it was reported as being pulled from certain Amazon and Barnes & Noble websites in the aftermath of the email release, it is still available for pre-ordering from other outlets. Fauci has also been accused of “profiteering” from the pandemic via the publication of the book, but in fact will earn no royalties from its publication.

Claim: The emails “explain how the virus was created in a Wuhan lab”.

Fact: False. The email in question was written by Adam Gaertner — an “independent researcher” — and forwarded to Fauci, laying out a theory about how the virus was created. The text Gaertner sent was in fact plagiarised from a 2005 paper explaining how a different virus — SARS-CoV — infects the body.

In an op-ed for GroundUp, Eduard Grebe explains that Gaertner clearly “does not understand the science described in the article that he sent an extract from”.

Gaertner runs a website called Covid Candy, from where one can purchase ivermectin-branded peak caps and face masks printed with the slogan “Oh I’m Sorry, I Thought This Was A Free Country”. (This is not a joke.)

Claim: In an email from February 2020, Fauci “states that asymptomatic people can’t spread the virus”.

Fact: False. That this claim is nonsense should be evident to anyone able to read with basic comprehension.

To claim that these words mean: “Asymptomatic people can’t spread the virus” is downright bizarre, or just very stupid.

Claim: “In other words, masks are useless”.

Fact: False. Although Nell doesn’t cite this, an email written in February 2020 by Fauci suggests: “The typical mask you buy in the drug store is not really effective in keeping out [the] virus”.

This was the official line at the time — particularly because there was a fear that members of the public would panic-buy all the masks available and cause shortages for the medical professionals who really needed them.

Both Fauci and the US Centers for Disease Control had amended their position by April 2020 — which is what scientists do in response to new evidence. South African health authorities had a similarly ambiguous attitude towards mask-wearing at the beginning of the pandemic, which also shifted towards an endorsement.

In June, Fauci told CNN that one of the aspects of the advice he gave at the beginning of the pandemic he most regretted was his ambivalence on masks.

None of this is a secret. It is all public record, and the shifts in approaches to mask-wearing were faithfully recorded by journalists throughout.

Claim: In an email from April 2020, “they acknowledge that children don’t need masks and are fairly immune to inflammatory responses supposedly caused by SARS-CoV-2”.

The key words here are: compared to adults.

Fauci does not state anywhere that children are immune, “fairly” or otherwise, to Covid-19 — as is demonstrated by the fact that children are now making up 21% of Covid-19 cases in the US, with at least 14,849 children hospitalised in that country so far.

Children are less likely to die of Covid-19. In the US, there have been just under 300 deaths. But more have been reported elsewhere: in Brazil, more than 2,200 children under the age of 10 are reported to have died so far, and Malaysia recently issued a warning about a growing number of child deaths.

Fact: WTF? One of the most surreal aspects of Nell’s email analysis is the implication that finding South Africa’s Dr Glenda Gray in Fauci’s inbox is somehow a “gotcha” moment. He does not attempt to spell out why this should be the case, presumably because there is absolutely no coherent argument that can be made — and because Nell relies on dog whistles to his audience regarding the existence of a Covid-19 Illuminati, or something.

Claim: Donald Trump “was right” about HCQ as a treatment for Covid-19.

Claim: False. Trump touted the drug hydroxychloroquine as a potential treatment for Covid-19 before any randomised controlled trials had been undertaken.

The document Nell cites was written by a rheumatologist, and states that remdesevir and chloroquine were found to be potentially promising treatments in tests on monkeys.

This, again, is no secret. However, large-scale clinical trials would find by June 2020 that hydroxychloroquine “provided no additional benefit compared to placebo control”.

If you’re going to take Covid-19 advice from a cartoonist, at least make it Zapiro. DM