The evocative power of an edible flower 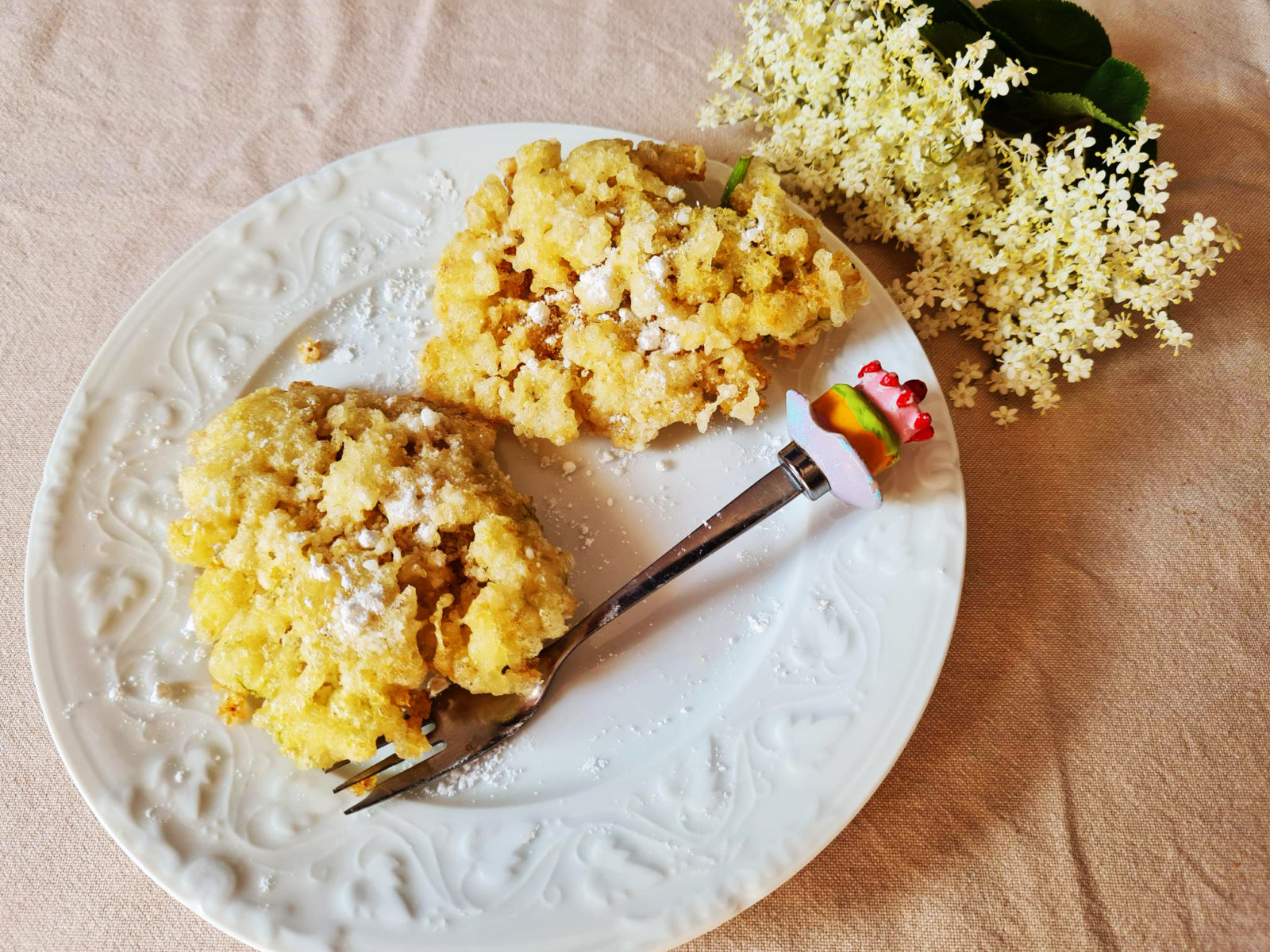 The fragrance of elderberry flowers will always remind me of soft summer light filtered through green leaves in a garden in Cambridge, where I first sipped elderberry-flower cordial. I had no idea what an elderberry flower looked like – and no premonition that decades later I would be an enthusiastic forager of these dainty flowers.

The author supports Ladles of Love, an NGO feeding the hungry and providing healthy food in Cape Town. You can support them here.

Any food lover knows how evocative the taste, the texture, even simply the smell of a favourite dish or drink from long ago can be.

Marcel Proust wrote a novel of seven volumes comprising thousands of pages, starting with a small sponge-cake cookie dipped in tea that brought back remembrance of things past. The book, on which he worked for more than a decade, became a monument of Western literature, A la Recherche du Temps Perdu. And that shell-shaped cookie, Proust’s madeleine, is now a universal metaphor for any sensory cue that triggers memory.

Like all food lovers I have my own personal madeleines. Fresh corn on the cob, shiny and slithery with melting butter, generously sprinkled with salt, eaten with my hands until the juice drips down my chin, will always take me back to childhood summer holidays in Stilbaai. A local farmer used to sell his mielies (nobody called it corn) fresh from the field under a tree on the banks of the river dividing the town.

My grandmother had regularly crossed this river on a pontoon when she was a girl, an adventure that formed part of our family lore, and I was almost sorry that a bridge had been built by the time I started spending holidays there.

Today I don’t remember much of those earliest holidays – except for the mealies.

That is what yellow smells like, I still think. No use trying to persuade me that colours don’t have a smell. Yellow smells bright and buttery, slightly salty like the sea air, exactly like those fresh Stilbaai mealies from long ago.

A related food taste that inevitably brings back a mixture of both good and bad memories is mieliepap made from maize flour and covered with a tomato and onion sauce that we called sheba. My first experience of this was as a rebellious teenager dumped against my will in a Lowveld boarding school, and frankly puzzled when we were served pap – which I’d thought was a breakfast food – for supper.

Even as an occasional breakfast dish, eaten with milk and sugar, in my Cape Town childhood, I was never mad about mieliepap. I preferred those instant cereals like Post Toasties or Rice Crispies that the kids in Hollywood movies were always enjoying. So maize porridge served for supper, with boerewors, was downright weird.

How strange then, that I have learned to love mieliepap with a spicy tomato relish so much that I sometimes prepare it for my French family when we have barbecues. We eat it with saucisse de Toulouse, which is the closest we can get to boerewors (in looks more than taste), and I convince the Frenchies to try it by telling them it’s the South African version of Italian polenta, which they all adore.

Ironic too, that nowadays I detest instant cereals, after many years of struggling to get my children to eat healthier breakfasts. It was a battle I couldn’t win. Rice Crispies and their sugar-coated brothers always ruled in our French house.

But whenever I taste mieliepap with sheba, I am flooded with memories of my last two school years in the subtropical lushness of the Lowveld.

Some of my culinary triggers are more exotic, strange fruits and vegetables and flowers I tasted for the first time as an adult: roasted green asparagus or black Provence truffles (which I raved about in previous French Letters) or courgette flowers dipped in tempura and deep-fried by an Italian neighbour called Armando. This meal completely blew my mind, simultaneously blowing a lot of my food prejudices away – for which I will never stop thanking Armando.

Imagine, I grew up believing that only the fairies in children’s books could feast on flowers. Apart from waterblommetjies, which we enjoyed in a wonderful bredie, but they didn’t really count as flowers since they grew in water.

Another fascinating and unforgettable first was a dish of whole artichokes served by a sophisticated friend at his home in Stellenbosch decades ago. I had no clue how to eat this thing on my plate. I had to surreptitiously watch the host dipping a little leaf in mayonnaise and scraping the flesh off with his teeth before I could tackle my own artichoke with fake confidence. But once again it was love at first bite – and now that I often prepare whole artichokes with home-made mayonnaise for my family, I still remember that Stellenbosch meal that started the love affair.

By the time I tasted elderberry-flower cordial in an English country garden, I knew that you didn’t have to be a fairy to find sustenance in flowers. It was a while after Armando had introduced me to fiori di zucca fritti, or fried zucchini flowers as the Americans call it, although I was still on a learning curve when it came to edible flowers. So drinking a syrup made from small star-shaped flowers, mixed with sparkling water and ice, was a divine experience.

I felt like a fairy, or an ancient Greek goddess sipping nectar. Something more than a mere mortal, at any rate.

“What is this?” I asked my hostess, who shrugged and said it was something she bought in a shop.

Back in France I couldn’t find elderberry-flower cordial in any shop, and it was quite a few years before I realised that an elderberry tree is called sureau in French, and that these splendid trees grow wild all over the countryside and produce clusters of creamy flowers in profusion every spring.

In fact, they are even found in South Africa, with the exquisite Afrikaans name of vlierbessie, but I was utterly unaware of this during my youth when I thought flowers were for fairies.

Once I started reading about elderberries, as I always do when I discover new foods, I understood why I was intuitively reminded of fairies and ancient gods. Apparently elderberry trees have been considered as homes for faeries since times immemorial, with all kinds of superstitious beliefs about what would happen to anyone stupid enough to cut down such a tree. Elderberries have also been linked to numerous spirits and mythological gods, most notably the Germanic goddess Holda.

Holda was quite a character, goddess of traditionally female household tasks, but also of winter and witches and the underworld. I got to know her as Frau Holle in the Grimm brothers’ fairy tales, or as Mother Frost in English folklore. She was not a mother you wanted to mess with, since she was a master of magic potions and shape-shifting, and helped witches to fly through the air.

Now I can’t look at the elderberry trees growing around my house without thinking of witches and magic potions.

In French these trees are also known as Seigneur des ruines or Lord of the Ruins, because they’re often found in ancient ruins or against old stone walls. Which also explains why our house is surrounded by sureaux. When we bought the building it wasn’t quite a ruin, but some of the walls in the yard are really old and in the past few years we have seen at least three elderberry trees literally growing out of the walls at an astonishing rate. They all start out as unidentifiable green shrubs which we suspect of being weeds (but are too lazy to pull out) until one fine spring day they surprise us with their beautiful white blossoms.

Yet not even the knowledge that these were the flowers I’d tasted in that magical drink in Cambridge could convince me to make my own cordial. I didn’t bother to look for a recipe, simply assuming that anything tasting so heavenly would acquire a hellish effort in the kitchen. Until the Covid-19 pandemic struck last year, and my previously amused interest in foraging for free foods in the countryside turned into a real passion.

Foraging became an enjoyable way to avoid over-crowded grocery shops and markets, a means to stay well away from people carrying the virus while exposing our taste buds to wild roots and leaves and flowers we had never dared to harvest before.

So last spring we made elderberry-flower fritters, deep-fried in the same way as courgette flowers and sprinkled with icing sugar, and later in the year, when the blackberries were hanging heavy in the trees, we made lovely elderberry jam.

But elderberry-flower cordial, that fragrant madeleine of mine, still wears the crown among all our elderberry creations. Definitely counting in its favour is that it’s actually delightfully easy to make – for about 3 litres of cordial, you need 20 flower clusters, two lemons, lots of sugar, a little citric acid, and voilà. This will provide hundreds of delicious drinks for hot summer days, since you use only a small tot of cordial mixed with sparkling or still water, or with gin or rum or whatever your heart desires if you want a refreshing alcoholic cocktail.

This summer we’ll probably expand our repertoire and attempt elderberry tart baked with almond flour, elderberry vinegar, elderberry capers, elderberry sorbet and even a delicious-sounding elderberry sauce for meat or fish that we found on the Great British Chefs website.

There are similar recipes available in French, of course, but I am specifically mentioning an English website in the hope that some TGIFood readers might be inspired once elderberry season comes along in your vicinity again. And remember, if you happen to live near an elderberry tree, treasure it – or else the fairies and Holda’s witches might punish you in ways you can’t even begin to imagine. DM/TGIFood