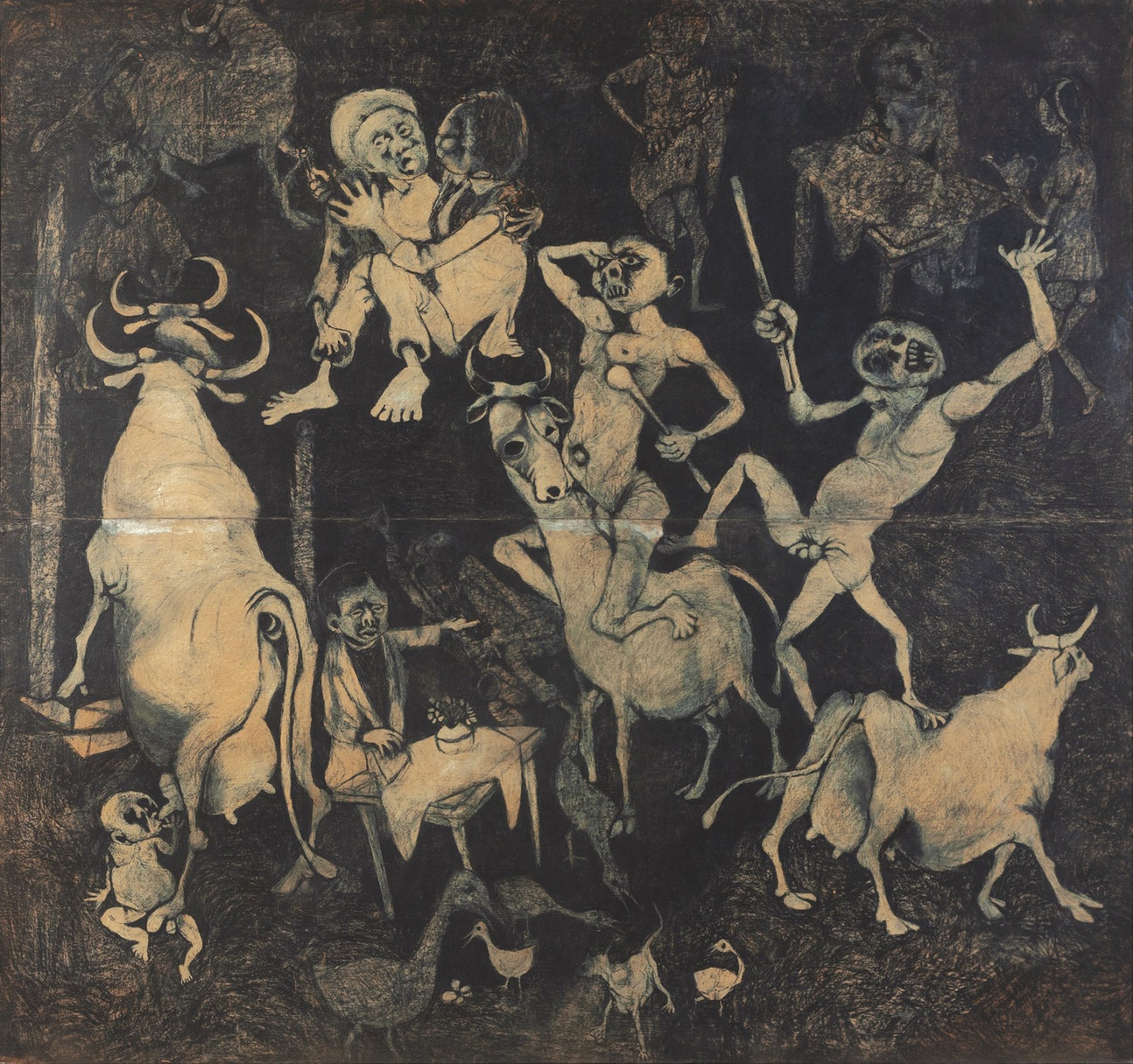 With each article in the Maverick Life Art School series we take a closer look at an individual piece of iconic South African art. This week we check out the undeniably iconic ‘African Guernica’.

Created by the painter and sculptor in 1967, the year before he would leave South Africa to live in exile, first moving to London in 1968 and later to New York in 1978, the African Guernica is a large charcoal drawing measuring just over 2m on each side at 226cm by 218cm. As evident in its title, it references the Spanish artist Pablo Picasso’s iconic anti-war Guernica, made three decades earlier in 1937. Its title was named for Guernica, the Spanish town that was bombed by Nazi planes on 26 April 1937, about which Lynn Robinson wrote for the Khan Academy: “It was history’s first aerial saturation bombing of a civilian population. It was a cold-blooded training mission designed to test a new bombing tactic to intimidate and terrorise the resistance. For over three hours, 25 bombers dropped 100,000 pounds of explosive and incendiary bombs on the village, reducing it to rubble… The devastation was appalling: fires burned for three days, and 70% of the city was destroyed. A third of the population, 1,600 civilians, were wounded or killed.”

Why does Feni’s ‘African Guernica’ matter?

At the time when Feni made his African Guernica, apartheid, along with the accompanying dislocation, dispossession, segregation and oppression of the country’s black, coloured and Indian populations was well under way. Like Picasso’s Guernica, Feni’s painting offers up his commentary and response to devastating atrocities visited upon the population by those in power. It also speaks to the themes that informed much of his work.

A 2004 biographical essay authored by Bruce Smith, describes Feni’s work thus: “In drawing after drawing he touches the nerve ends of our consciences. This young artist’s theme is the universal agony of man, rendered specific through his own experience in South Africa. His figures are frozen in a kind of agonised despair. In some cases the twist of an arm, the sprawl of a leg, is as eloquent as a mask of pain for a face. At other times it is as though the music of some wild ritual dance has suddenly stopped. Its dying note lingers in the heart.”

What the learned minds say about the African Guernica

“In Feni’s painting we see a scene dominated by various animal and pseudo-human figures. A double-headed cow turns its back on us while it suckles a child at its teats. A grotesque, naked, squealing human figure, head a-kilter, seems to be splitting from itself with a third leg. Two groping figures seem to see each other and are alarmed. Another strange-armed figure is seated at a table as if awaiting a meal, while he seems to be begging at the same time. Yet another of these figures seems to be the harbinger of doom – perhaps one of the four biblical horsemen except his steed seems to be more of a comical cow,” writes Durban-born visual artist Sharlene Khan in her essay on the African Guernica.

She continues: “Human beings make art. We reason. We have evolved beyond the basic needs of survival. But in Feni’s African Guernica we see exactly the tensions of an artist commenting on the insanity of reason which results in the oppression of one human being by another.”

Recently the artwork was part of the exhibition 101 Collecting Conversations: Signature Works of a Century, which ran from September 2019 to December 2020 at The Javett Art Centre at the University of Pretoria (Javett-UP).

As published on Javett-UP’s website: “Feni’s picture shows a world at odds with itself, with shades too of the symbolic madness depicted in Hieronymus Bosch’s great religious allegories, especially the Garden of Earthly Delights. His rendering of the mutated and twisted animal figures, and the equally manic energies of the human figures, shows a world out of balance, an allegory of the conflict not only between the human and the natural world, the social and the cosmic, but between humans themselves, as the demented three-legged figure dominating the right side of the picture plane suggests.”

In a 2002 article published by the Mail & Guardian, titled “Tales from ‘the Goya of the townships’”, Moji Mokone writes: “The African Guernica is an indictment of the terrorism of political repression; it is about a human experience of a hapless urban community under a state of siege; it depicts a traumatised community in the throes of an insidious ‘cold war’ of apartheid’s inhumanity. Like Guernica, Picasso’s depiction of the siege of San Sebastian, the African Guernica resonates with harrowing images, uncomprehending bewilderment of both humans and animals… the African Guernica speaks with eloquent passion to a native human experience of the urban township.”

Where is the ‘African Guernica’ now?

The work is part of the permanent collection of the University of Fort Hare’s De Beers Art Gallery in the Eastern Cape. However, it also travels as part of other exhibitions, such as the abovementioned exhibitions at  Javett-UP in 2020. DM/ML