Paramedics on red alert: EMS crews in Western Cape increasingly in the line of fire 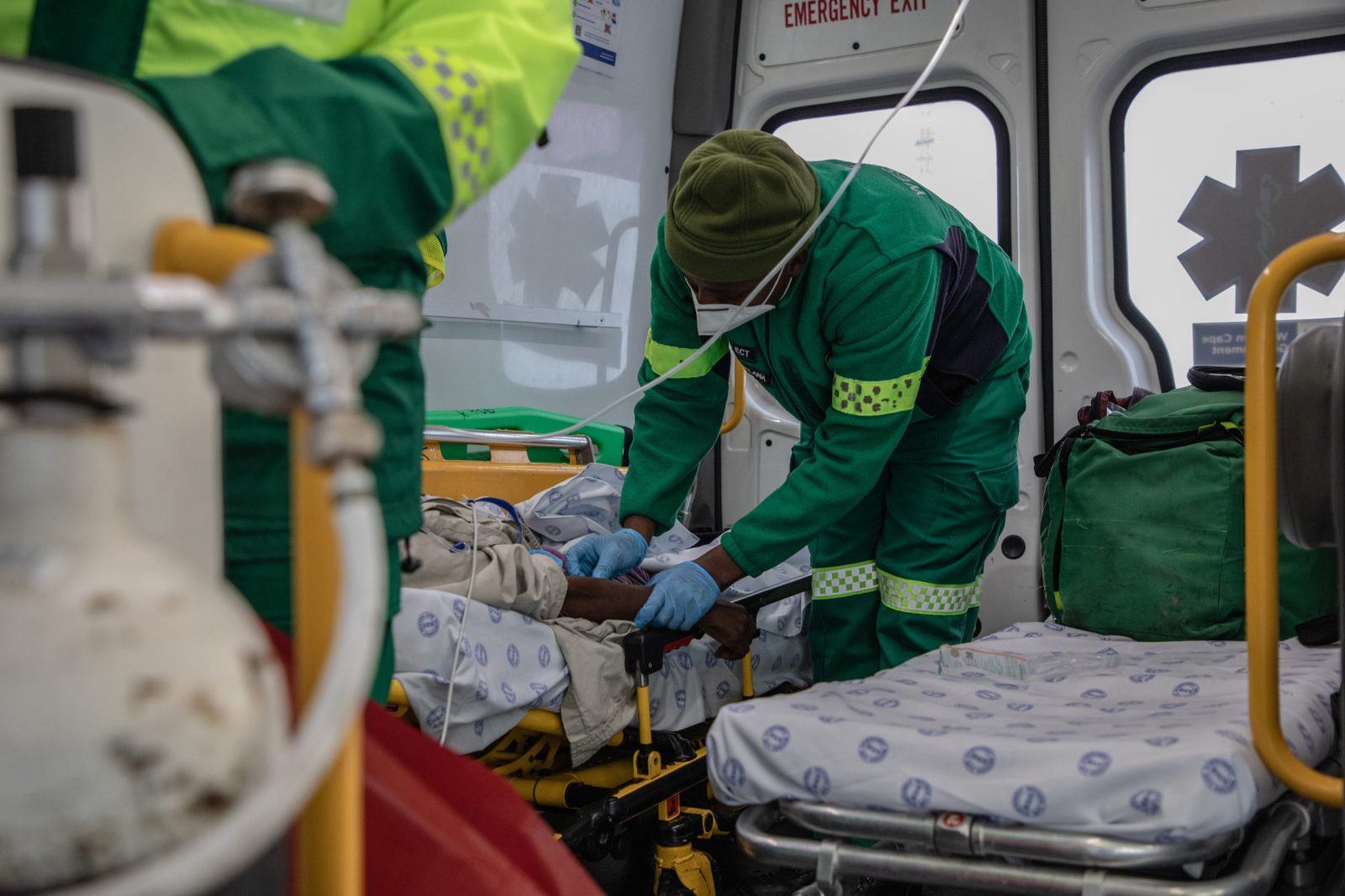 Paramedic, Bongani Mngqelana (36) attempts to stabilise a patient with respiratory problems and suspected of being infected by Covid-19, in his ambulance outside Mitchells Plain Hospital on Friday, 28 May 2021. (Photo: Victoria O’Regan)

In South Africa, frontline EMS staff have been the medical soldiers in the ground war against Covid-19, showing unwavering commitment when responding to medical emergencies. But the one-two punch of the pandemic and rise in violent attacks on paramedics since the start of lockdown has left emergency personnel feeling frightened and fatigued.

As dusk was falling on Saturday, 3 April, Southern Division paramedic at Mitchells Plain EMS base, Zukiswa Qutyelo and her partner were driving back from a call in Browns Farm, Philippi when four men approached their ambulance and robbed them at gunpoint.

Qutyelo watched from behind the steering wheel as the men approached the vehicle and began rapping on her window with their guns, shouting orders for her to hand over her personal items. Shaking, she unlocked her door and gave up her cellphone, wallet and a crumpled R50 note she had in her jacket pocket.

“I can’t remember looking them in the eye,” Qutyelo would later say. “But I remember the gun against my head.”

After getting what they were after, the criminals left, only to come back to the ambulance moments later to rob Qutyelo’s partner, who was in the back of the van attending to a patient.

Qutyelo was stunned. She couldn’t believe the bravado of the teenagers who had arrived at her window, guns at the ready, for a second time in a few minutes.

“It was summertime, so it was still light,” she said, recalling seeing people chatting on the street corner, watching the scene unfold. “I could see that people were watching me like they were watching a movie.”

Finally, the criminals left, and Qutyelo was able to contact her controller.

In 2020, the total number of attacks on paramedics in the province was 70, she added.

“Although the statistics indicate that there’s been a slight decrease, it is still worrying that the attacks are occurring, leaving our EMS officials traumatised in the process,” said Bessick.

The attacks on emergency personnel in communities across the province are motivated by criminals with the intent to “severely harm, rob and jeopardise the contributions of paramedics,” Bessick told Daily Maverick.

But, there are also incidents where paramedics are physically beaten or have stones or rocks thrown at them, she said.

Before she was attacked on the Easter weekend, Qutyelo had heard of incidents from her colleagues of paramedics who had been robbed or beaten while responding to a medical emergency.

Many of the attacks on paramedics in the province occur in high-risk areas in the Cape Metro district, known as “red zones”, and often happen “late in the evening or early hours of the morning,” said Bessick.

Although red zone areas change regularly — depending on spikes in violence and staff attacks, unsafe protest action and other contributing factors in the areas — the permanent red zones include Chicago in Paarl, Beacon Valley and Tafelsig in Mitchells Plain, and Hanover Park.

Cape Town areas that have been identified by the Western Cape health department as “night time red zones” (between 6:30pm and 6:30am) are Manenberg, Browns Farm, Nyanga, Gugulethu, Kalksteenfontein, Site C and J Section in Lingelethu (both in Khayelitsha), Harare, Mandela Park and Samora Machel.

But, according to Qutyelo, since the outbreak of Covid-19 in South Africa “everywhere’s a red zone”.

The sharp rise in unemployment and hunger has contributed to the increase in attacks on emergency personnel because people know paramedics have a steady income and are often carrying personal items such as wallets and phones, said Qutyelo.

In red zones, EMS staff are required to wait at police stations for an escort before entering a high crime area to provide emergency health services.

“We can’t go there without an escort, so we have to start at the police station,” said Qutyelo. But this “delays” the emergency response time, and EMS staff could end up waiting for one or two hours before SAPS can accompany them, she said.

“I’m always worried about our patients,” Qutyelo told Daily Maverick. “Because if we can’t get there on time, what’s going to happen to the patient?”

Since the attacks on emergency personnel began, paramedics operating in red zones have started briefly stabilising the patient in the field and then returning to the safety of the hospital to evaluate the patient in full, said Qutyelo.

“We can’t stay long in the area so we do everything at the hospital, but it’s not supposed to be like that,” she said.

In May 2021, eNCA reported that paramedics in parts of Cape Town are allegedly being forced to pay extortion syndicates for protection. According to eNCA, the increase in attacks on EMS staff in red zone areas “do not appear to be related to the extortion syndicates”.

Southern Division paramedic Bongani Mngqelana, who has been working in the Mitchells Plain area and surrounds for 13 years, told Daily Maverick that he has heard of extortion groups demanding money from paramedics in the area.

Mngqelana said the weekend at month-end is the “most dangerous” time for emergency personnel in the district to be operating because criminals and extortion syndicates know that paramedics have recently been paid.

The issue of extortion syndicates rampant in certain red zones “has never been raised to [the Western Cape health department] by EMS officials themselves, but we are currently investigating the claims as reported in the news media,” Bessick told Daily Maverick.

“EMS officials have also been urged to come forward with any information by reporting it to the appropriate reporting channels for further investigation,” she said.

As the safety of paramedics is paramount, the Western Cape government is “continually exploring new ways to ensure that our staff are able to return home safely every day,” said Bessick.

The Health and Other Services Personnel Trade Union of South Africa (Hospersa), has also not received reports from members having to pay protection money, according to the Western Cape Hospersa provincial chairperson Gerald Lotriet.

“I can openly say that we as a union have not received any reports from our members in terms of any extortion of paying protection money, but we are calling on all of our members to report it directly to our union office,” Lotriet told Daily Maverick.

Mngqelana believes this is because people are too scared to come forward.

Qutyelo and Mngqelana said there should be more measures put in place by the government to protect paramedics. EMS divisions are short-staffed because paramedics “are too afraid to come back”, said Qutyelo, who took a week off work after she was attacked.

“[Paramedics] are giving up their jobs; there are many who are at home right now, traumatised because they’ve been robbed,” said Qutyelo. DM