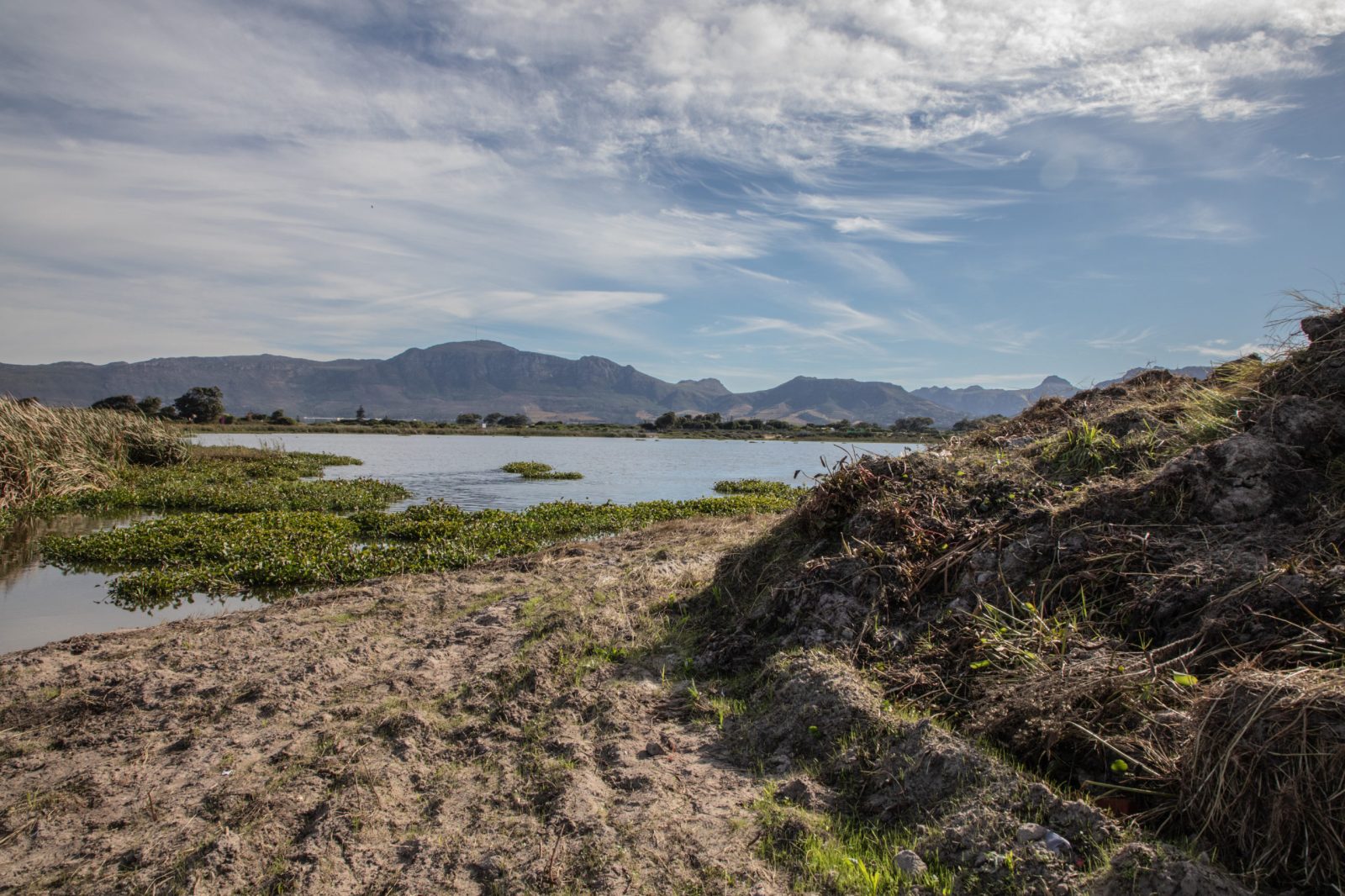 A part of the Princess Vlei eastern shoreline and restoration area on 18 May 2021, that was destroyed by a contractor removing water hyacinth, at Princess Vlei, Grassy Park on 6 May 2021. (Photo: Victoria O'Regan)

The City of Cape Town has been accused of negligence and causing ecological damage in its approach to the recent clearing of invasive plants from the Princess Vlei wetland in Grassy Park. The City has responded that it is investigating the complaint. The green area has a long history and is a treasured part of the city, serving as the gateway to the wetlands in the area.

When Zoë Poulsen, a botanist and Fairway resident, noticed a large, long-reach excavator unearthing part of the Princess Vlei shoreline on Thursday, 6 May her knee-jerk reaction was to stand in front of it and bar the machine from causing further ecological damage to the area.

Poulsen was aware that the digger was destroying an area of shoreline that had recently been restored by the Princess Vlei Forum, as part of a community-led fynbos restoration project.

The area, according to the Princess Vlei Forum, contained about 38 different plant species, including the critically endangered Serruria foeniculacea and 14 Erica verticillata, many of which had been ripped from the soil in a matter of minutes and lay in heaps along the eastern embankment.

When witnessing the devastation, Poulsen told Daily Maverick that her “blood ran cold”, knowing “all the hard work that had gone into the restoration plot as part of the Forum’s restoration project”.

She immediately contacted members of the Forum, who alerted officials from the City of Cape Town, including the ward councillor, Kevin Southgate, of what had happened.

The purpose of the operation, which was carried out by a City appointed contractor, was to clear the invasive aquatic plant known as water hyacinth which requires regular removal from the outlet of the vlei, in order to prevent flooding, secretary of the Princess Vlei Forum, Bridget Pitt told Daily Maverick.

The hyacinth had not been removed for over a year, and the task had a “tight window” in which to be completed before the leopard toad breeding season, beginning at the end of May, said Pitt.

Since 2014, the Princess Vlei wetland in Grassy Park, Cape Town has been restored, conserved and managed by the Princess Vlei Forum in agreement with the City of Cape Town’s Department of Recreation and Parks as the land authority. The City’s Catchment Stormwater and River Management (CSRM) branch is responsible for managing waterways in the City and the removal of invasive species, such as water hyacinth.

The Princess Vlei Forum was formed in 2012, in response to the City of Cape Town’s proposal to build a shopping mall on Princess Vlei’s eastern shoreline, which was eventually halted in 2014 after a contentious 17-year-long battle to protect the vlei.

According to The Princess Vlei Forum, the excavator should not have been operating on that site, and the City failed to adhere to certain protocols outlined in a maintenance management plan, which led to extensive damage to the restoration area.

“Although this is the most damaging, it is not the first incident,” according to a Princess Vlei Forum newsletter.

“In 2018, a western leopard toad breeding site was destroyed by a contractor removing water hyacinth. In 2019, a contractor dumped biomass on one of the older restoration sites, causing major damage to the plants,” read the newsletter.

Following these incidents, the Forum appointed a conservation site manager in 2019 “to manage the site with more sensitivity to the biodiversity”, who drew up a maintenance management plan, explaining how contractors should operate on site, said Pitt.

But the operator did not follow the plan of where to remove the hyacinth and place the biomass, nor were members of the forum informed when the contractor was on site.

According to the Princess Vlei Forum, the excavator caused extensive environmental damage on 6 May, including:

“The underlying issue — what this highlights for us — is that there are weaknesses in that Princess Vlei really need to be managed as a biodiversity-sensitive site,” said Pitt.

Following the incident, the Princess Vlei Forum subsequently wrote to Mayor Dan Plato on 11 May, requesting a meeting to discuss what happened and what action is required going forward, said Pitt.

“We’re hoping that the City will work with us in ensuring that going forward, it is correctly managed with the kind of care that is needed,” added Pitt.

The Forum has called on the City to:

In response to Daily Maverick’s queries about the destruction caused to the section of Princess Vlei’s rehabilitated shoreline on 6 May, Councillor Zahid Badroodien, Mayoral Committee Member for Community Services and Health had this to say:

The City’s Department of Recreation and Parks “is currently investigating a complaint lodged by the Princess Vlei Forum on 11 May”, regarding the ecological damage caused by a City appointed contractor.

“The Recreation and Parks Department has had various engagements with all roleplayers on-site following the incident, including the Princess Vlei Forum, and are working towards putting measures in place to ensure that this does not happen again,” Badroodien told Daily Maverick. DM