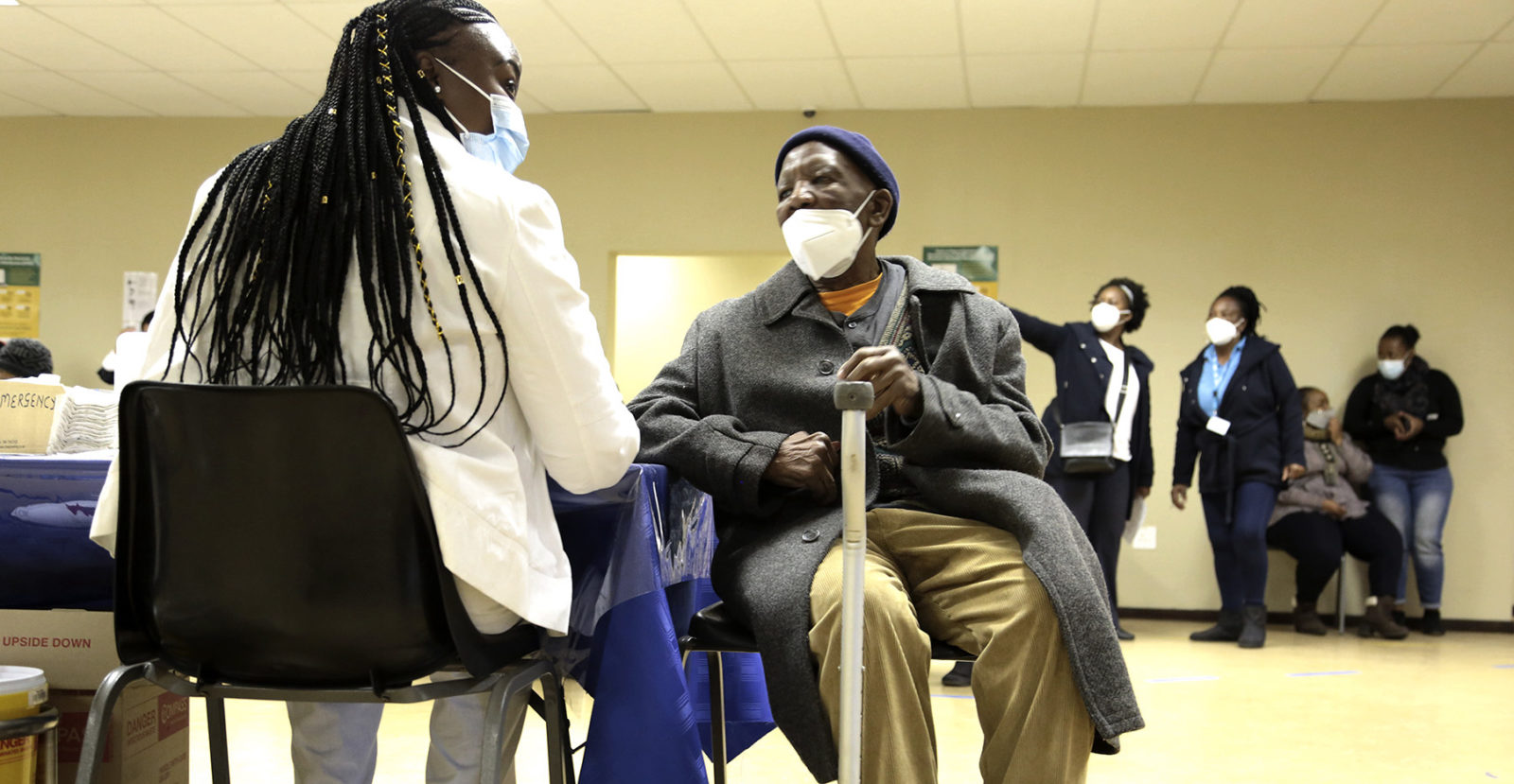 Phase 2 of South Africa’s vaccination roll-out has begun. Elri Voigt unpacks how provinces will go about vaccinating those aged 60 and older.

Phase 2 of South Africa’s vaccination roll-out has started at an initial 87 vaccination sites across the country. The government aims to vaccinate five million people aged 60 and older by the end of June, “provided that the supply of vaccine flows as anticipated”, Health Minister Zweli Mkhize said on Sunday.

Four of the initial 87 sites are in the private sector and the rest in the public sector. A list of vaccination sites per province can be seen here. More sites will be added over time.

There are several ways that someone who is 60 years and older can register for vaccination. The first is through the Electronic Vaccination Data System (EVDS), which can be accessed here:

Mkhize added that walk-in registration will also later be available at vaccination sites, but not right away.

In most provinces, only a relatively small fraction of the planned vaccination sites are being activated this week, with numbers to be increased over the next month. Most provinces have also launched initiatives to help more people over 60 to register for vaccination — so far registration numbers in most provinces are quite low.

“It’s a very important group of people to be vaccinated, more people above the ages of 60 have a much higher mortality rate should they be infected with Covid-19,” says Dr Leon Geffen, Executive Director of the Samson Institute for Ageing Research (SIFAR). “Every facility that I’ve spoken to is very keen to receive the vaccine. They would like the vaccine to be given as soon as possible so that they can resume life as prior to Covid-19 for their residents.”

Delia Bulcraig, health manager at Neighbourhood Old Age Homes (NOAH) in the Western Cape, tells Spotlight that many of its members didn’t have access to cellphones that supported internet or WiFi connections, and so someone was employed part-time to register each member.

“We are providing primary health care to geriatrics and feel strongly that we have a responsibility to them to assist with this,” she says.

She says NOAH has registered 100 members living in the organisation’s housing as well as 600 of their clinic members.

“We are hoping to be able to administer the vaccines at our clinics to our clinic members and house members. This, however, is still not confirmed,” she says.

Bulcraig says that many of NOAH’s members are quite anxious to be vaccinated, as they know how vulnerable they are to Covid-19.

“I think that registration for many of our elderly and other citizens is going to be difficult due to technological challenges and wish there had been another system to scan IDs or capture vaccinations,” she says.

Here is what the nine provinces have planned:

On Sunday MEC for Health in the Western Cape, Nomafrench Mbombo said 226,137 people aged 60 years and older had registered on the EVDS for Phase 2. This is only about 30% of the older people in this age group. Mbombo, with other health MECs and heads of provincial health departments, was part of a national health council online briefing ahead of the start of the mass vaccination roll-out.

Western Cape Head of Health Dr Keith Cloete, during a digicon last week, said the province aims to vaccinate just above 720,000 people over 60 before 30 June 2021, as part of Phase 2A.

Bulk registration of residents in old age homes took place near the end of last week, Cloete said. They also provided the national department with a list of old age homes to be registered on the EVDS.

Cloete said from 17 May, outreach vaccination teams will book appointments at old age homes that are linked to the vaccination sites that will be active that week. Once the teams arrive at an old age home, vaccinators will have to obtain informed consent from each resident. The first dose of the Pfizer vaccine will be given and an appointment for the second dose booked. To test the system, they will invite a select group of people 60 years and older to be vaccinated at one of the vaccination sites.

Cloete said the plan is to scale up the vaccination roll-out in the coming weeks.

Spokesperson for the Western Cape Department of Health, Mark van der Heever, told Spotlight the department will have door-to-door awareness campaigns to get those 60 and older to register for vaccination.

“Various efforts that include working with community structures are under way at a local level. NGOs and various partners are providing support at the local level to assist those who need help with registration,” he said.

Van der Heever said that each vaccination site will allow for walk-ins to register.

“The City of Cape Town libraries are being engaged to support community-level registration. All of this is work in progress and each community will have a different process or processes based on local context and [their] need for support,” he said.

On Sunday, Eastern Cape MEC for Health, Nomakhosazana Meth said the province was ready to start on Monday with 25 vaccination sites.

Meth said all vaccination sites, except two, had the necessary cold storage of -20℃. The province has been working with its tertiary institutions, such as Rhodes University, to store the Pfizer vaccines at -70℃.

The province expects to receive 43,000 doses of the Pfizer vaccine, said Meth.

She said mobile teams will target 40 old age homes that will be outfitted with technology such as routers to ensure that there were no issues with internet connectivity.

Over 174,000 people aged 60 and older have registered in the province on the EVDS to date.

Free State MEC for Health Montseng Tsiu said the province would start on Monday with two vaccination sites that will each target an old age home.

The sites will be in the Mangaung District and the Thabo Mofutsanyana District. In the coming weeks, old age homes in Harrismith, Petrus Steyn and Reitz will be targeted, she said.

Tsiu said that the other districts would follow suit once they received more vaccine doses.

She said the target population for Phase 2 in the province was just above 288,000 people. Thus far only 37,741 people of 60 and older had registered on the EVDS.

“They will also help those who are unable to leave home and arrange for them to be vaccinated at home. Community workers are assisting the elderly in their homes and other settings to register on the EVDS in preparation for vaccination,” he said.

“The province is implementing a social mobilisation plan to increase demand for vaccination among the 60 years age group across all districts,” he said.

KwaZulu-Natal MEC for Health, Nomagugu Simelane-Zulu said that close to 100,000 healthcare workers had been vaccinated so far, with about 60,000 remaining.

Simelane-Zulu said only eight of the 11 districts in the province have old age homes.

They will notify the community which vaccination sites are operational through various platforms, such as newspapers and the provincial department of health’s social media sites.

Limpopo MEC for Health Dr Phophi Ramathuba said more than 33,000 of 39,000 healthcare workers had been vaccinated in the province to date.

The province had also registered about 180,000 people of 60 and older for vaccination.

Ramathuba said 37 vaccination sites had been identified in the public sector, but only six would be running this week due to the logistical requirements around storing the Pfizer vaccine.

The province has received just above 8,000 doses of the Pfizer vaccine.

She said they would deploy 91 outreach vaccination teams throughout the province.

Northern Cape MEC for Health Maruping Lekwene said that by 15 May, the province had vaccinated 77% of the province’s 9,200 healthcare workers.

The province’s Phase 2 roll-out was to start on Monday at the Harmony Home in Kimberley, which would be the primary vaccination site for the first week. Lekwene said they would then also move to the Frances Baard and Pixley kaSeme districts this week.

The aim was to first vaccinate people above 60 in eight old age homes in Sol Plaatjie District, he said. The province plans to open two more sites by the end of the week and aims to have five vaccination sites running by the following week.

Overall, the province aims to open a minimum of 30 vaccination sites for the vaccination roll-out. Lekwene said about 11,000 people of above 60 had registered on the EVDS so far and they could vaccinate 3,510 people with the first batch of Pfizer vaccines that had been received to date.

There were 220 trained vaccinators in the province, he said. They were also working with Sassa to encourage older people to register.

North West MEC for Health Dr Madoda Sambatha said his province was to start Phase 2 on Monday with five vaccination sites and five additional sites would be added on Tuesday.

The remaining healthcare workers would be vaccinated on Monday at the various sites from 8am to 4pm. Sambatha said those of 60 years and older would be vaccinated at the sites between 12pm and 4pm. It is not clear if the time slots apply only for the first day or throughout Phase 2.

He said they would allow walk-ins at the vaccination sites to register for vaccination. Sambatha also asked families of older people to help them register. The department was working with the provincial department of social development to vaccinate people aged 60 and older in old age homes. The North West received about 19,000 doses of Pfizer vaccine and just more than 59,000 people over 60 had been registered on the EVDS, Sambatha said.

From next week, the province will do door-to-door campaigns to help with registration.

She said so far, they had identified 49 old age homes with 3,380 older persons to help with vaccination.

The roll-out was to begin in six hospitals across the province, said Manzini, and mobile outreach teams would go out into communities far from hospitals.

Mpumalanga had received 7,020 doses of the Pfizer vaccine and trained 3,321 vaccinators, with each vaccinator able to vaccinate about 50 people a day. DM/MC