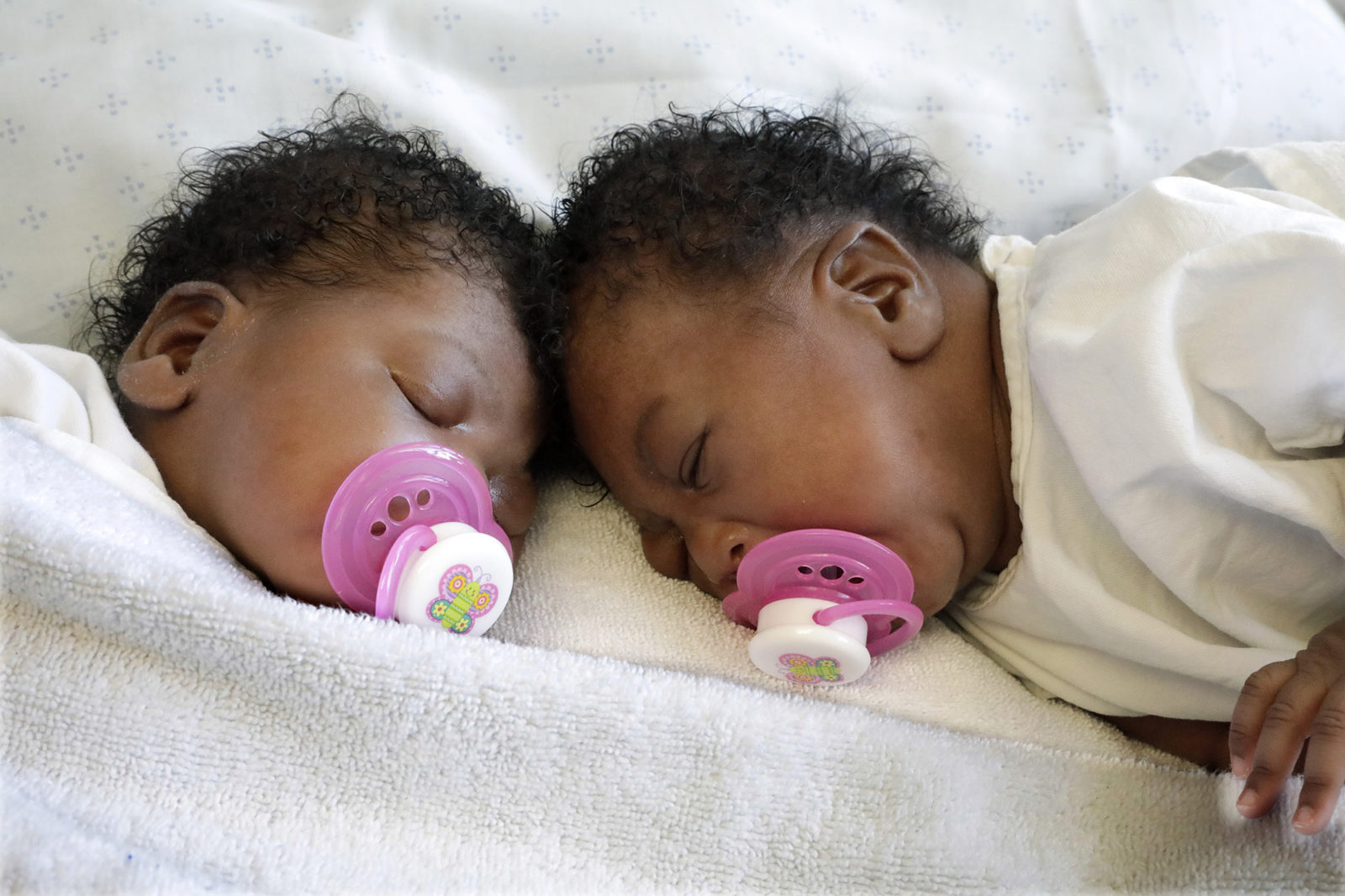 Twins Siphosetu and Amahle, who were born conjoined at the head, sleep before undergoing a surgery at Red Cross Children's Hospital on 24 February 2021 to be separated. Photo: Western Cape Government Health.

Twins Siphosetu and Amahle were only three weeks old when they underwent a life-altering and life-saving surgery at Red Cross War Memorial Children’s Hospital in Cape Town, in February 2021.

They were born as craniopagus twins, meaning they were joined at the skull. This incredibly rare condition was last seen at the hospital more than 50 years ago.

A team of 19 specialist healthcare workers performed the surgery, which took three weeks to plan using detailed 3D modelling. And it paid off: the sisters are expected to lead full, healthy lives.

Conjoined twinning occurs when the fertilised egg fails to separate completely and this can happen at different levels, explained Professor Anthony Figaji. He is the head of paediatric neurosurgery at Red Cross War Memorial Children’s Hospital.

Conjoined twinning occurs in one in 100,000 births worldwide. Half of conjoined twins are stillborn and about 30% of those born will not survive to the point of separation, said Figaji.

Craniopagus twins are joined at the cranium – or skull – and account for only 5% of conjoined twinning. Separation operations have been performed for decades, but there is a 25% mortality rate associated with the procedure.

The hospital has performed this surgery for many pairs of conjoined twins over the years. But craniopagus is the rarest of them all. The last pair was treated at the hospital more than 50 years ago, said Figaji. This was before the modern era of imaging and surgical technique and they did not survive the separation, he said.

“The occurrence of the condition is completely random, but on average we would expect it to occur around once every 15 to 20 years in the country,” he said.

The twins’ mother, Ntombikayise Tyhalisi, and the nurses were shocked when she delivered twins at an Eastern Cape health facility – even more so when they realised the babies were joined at the head.

Tyhalisi was expecting one baby and was told “that the baby was just facing the wrong way at birth”.

When the urge to push did not come, she requested a C-section. She was “very happy” when her daughters were born. But the difficulties she experienced in holding and bathing them – even with the help of nurses – frightened her “a lot”.

She spent three days at the Eastern Cape health facility before being referred to the Red Cross War Memorial Children’s Hospital on the fourth day.

Here, the twins would undergo surgery to be separated. “Although there are some reports of craniopagus twins surviving into adulthood, this depends on exactly how the heads are connected. In this case, development would not have been possible because they were connected near the top of their heads – they would not have been able to sit or stand,” said Figaji.

It was important to separate them when they were so young because this would increase their chances of normal development – “the earlier the better”, said Figaji.

The operation was planned using a 3D-printed model built by Dr Ettienne Coetzee, a specialist anaesthesiologist at the hospital. The surgical team were then able to visualise and plan how they would lay the babies on the bed, how they would be anaesthetised and how they would approach the surgical separation, said Figaji.

After three weeks of planning, the surgery was performed by a multidisciplinary team consisting of  neurosurgeons, plastic surgeons, anaesthetists and nurses. Each baby required its own full set of specialists.

The primary concern going into the surgery was to see how the twins were connected: they could have possibly shared brain tissue, bone and blood vessels, explained Figaji. Scans and imaging showed the team that the babies did not share brain tissue or major blood vessels. Still, they prepared for any and every scenario, said Figaji.

“We were fortunate in this case that the connection didn’t involve brain tissue or major vessels going from one twin to the other,” he said. If these had been shared, it would have made the surgery riskier and the chance of brain damage much higher.

Other key concerns were bleeding, because the scalp has high blood supply, and the anaesthetic administered to the newborns, said Dr Bruce Lelala, a plastic surgeon who was part of the operating team.

The team was able to cover each baby’s scalp with its own tissue, explained Lelala. This means that no further surgery will be required. “We were prepared for a six-hour surgery at least. However, this surgery lasted only an hour-and-a-half. This is a huge plus for the recovery of the twins,” said Professor Saleigh Adams, another plastic surgeon who was part of the operating team.

Adams, Lelala and Figaji agreed that the surgery was a success and do not expect any complications. The separation was done “without too much trouble”, said Figaji.

Immediately after the surgery, the main concern was the risk of infection. “We have taken every precaution to prevent infection from happening. If they contract an infection and get wound saps then they will have to go for operations,” said Lelala at the time.

The twins will be monitored by the team for years to come. Slight skull deformity is expected. But, because they are so young, it is anticipated the newborns’ skulls will “remodel and reshape” over time, explained Figaji. Adams and Lelala agreed that head shape and scarring will be monitored and procedures will be scheduled as needed.

The sisters were discharged just days after the successful surgery and have returned to their home in the Eastern Cape. They are “doing well” and are set for a follow-up at the hospital soon, said Figaji.

Tyhalisi was “overjoyed” after the twins were successfully separated. She was anxious to get home to introduce the twins to their older siblings. She lives with her brothers and is grateful her sister will be able to help her from time to time.

“The nurses have been a big help to me,” she said after the surgery. They sat with her in the waiting room while her daughters were in theatre. They assured her that she and her daughters were in safe hands at Red Cross War Memorial Children’s Hospital and that she will leave it “holding one baby on each side”.

“That really gave me courage not to throw in the towel,” she said.