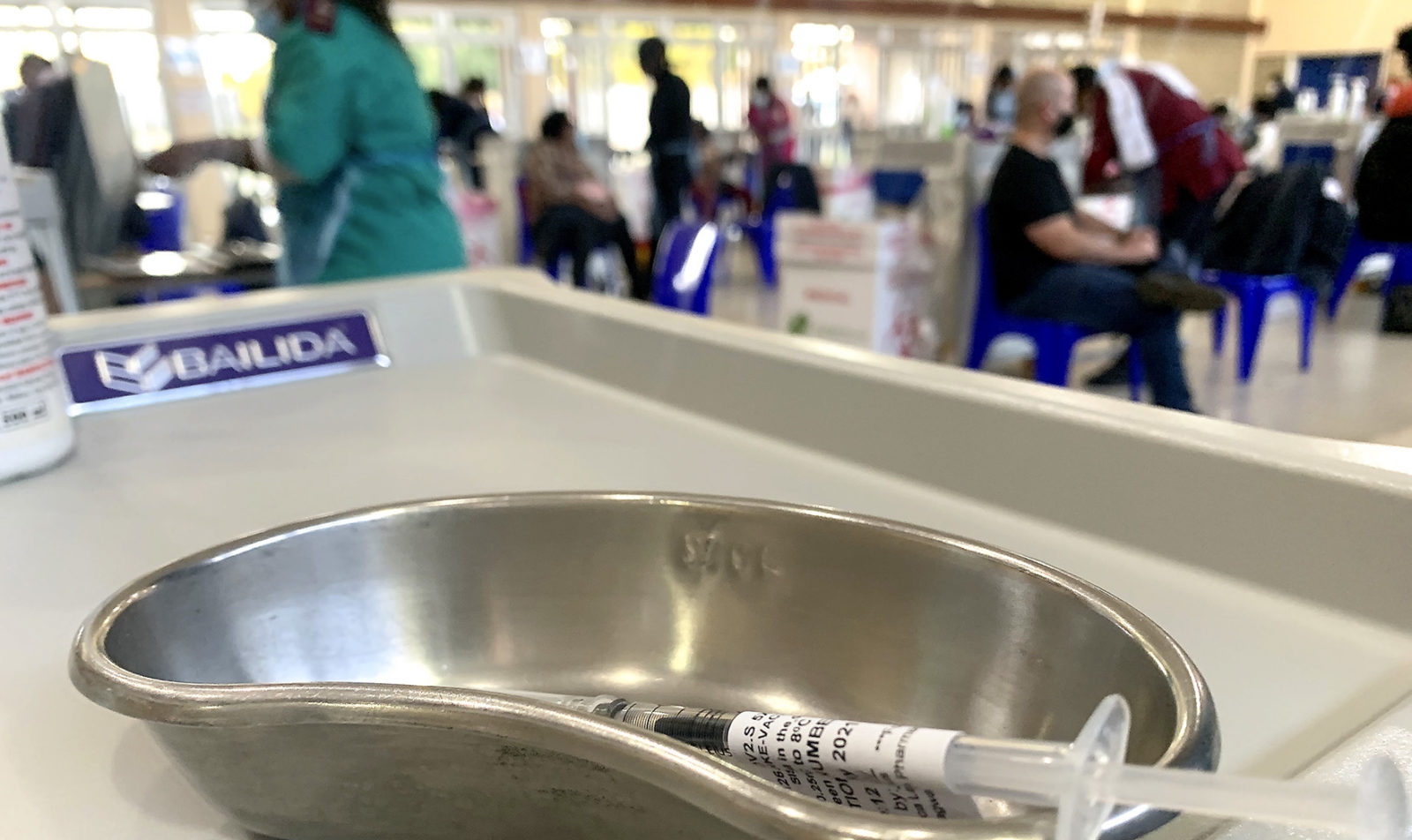 The Sisonke vaccine before being injected to a health worker at Chris Hani Baragwanath Hospital in Soweto, a drive to vaccinate as many health workers as possible is under way. (Photo:Felix Dlangamandla)

With phase two of the country’s vaccination rollout set to start on Monday, 17 May, provinces are gearing up for the largest adult vaccination push the country has ever seen. Elri Voigt provides an update on preparations for the next phase in the nine provinces and progress made in vaccinating healthcare workers through the Sisonke implementation study.

Until now Covid-19 vaccinations in South Africa have only taken place in the context of clinical trials and the Sisonke implementation study. That will change on Monday (17 May) when the country’s mass vaccination programme kicks off. It will also see the start of phase 2 of the vaccine rollout plan, as adults over the age of 60 become eligible for vaccination.

If things go according to plan, the number of Covid-19 vaccine doses administered in the country should increase in the coming weeks to well over 100,000 per day. In the Sisonke study, it has mostly been in the region of 10,000 a day, although numbers have increased substantially in the last few days as the study neared its 15 May end date.

How efficiently vaccines are distributed and administered in South Africa will largely depend on provincial departments of health. Accordingly, we have rounded up the available information on what the nine provinces are planning and how they are approaching some common problems, such as what seems to be relatively low registration rates for people over 60. (If you are over 60 you can register here.)

It also seems provinces have some flexibility in deciding exactly how to go about implementing the different phases, with the Western Cape, for example, opting to start by targeting retirement homes as they kick-off phase two. There is also wide variability in the amount of information shared online by the different provinces concerning their vaccination plans.

During a press conference on 7 May, acting head of the Gauteng Health Department, Nomsa Mmope, said that the province will start phase one B on 17 May, which will focus on the remaining healthcare workers (HCWs), traditional healers, and employees in funeral parlours.

She said when the Sisonke Programme ends, the province will have vaccinated just over 100,000 HCWs, out of the total target of 215,101 HCWs. The remaining HCWs will be vaccinated with the Pfizer vaccines allocated to the province.

According to an update by the Gauteng Department of Health, the province by 10 May had vaccinated 97,684 HCWs.

According to Mmope, just over 60,000 doses of the Pfizer vaccine have been allocated to the public sector in the province so far.

She added there are currently 21 vaccination sites across the province that will be used specifically for vaccination with the Pfizer vaccine, and all cold storage facilities at the distribution sites are working.

There are 285 medical (health facilities) and 249 non-medical (such as schools and community halls) vaccination sites available for phase one B.

By 6 May, there were 235,202 persons over the age of 60 registered on the Electronic Vaccination Data System (EVDS). Mmope says the target population is just over 1.3 million. As in other provinces, many eligible people in Gauteng clearly haven’t yet registered.

Western Cape Premier Alan Winde said in a digicon on Thursday that 84,092 HCWs in the province had been vaccinated through the Sisonke Programme by 12 May.

Head of Health in the Western Cape, Dr Keith Cloete said the province aims to have about 60% of HCWs vaccinated by 15 May, with the doses allocated for the Sisonke Programme.

After 15 May, the rest of the healthcare workers will be vaccinated as part of phase one B, using the Pfizer vaccines. Phase two will start on 17 May, according to Cloete. This means the two phases will run at the same time.

He said that phase two will start mainly with outreach teams going to vaccinate the residents of retirement homes, 60 and older, referred to as Phase Two A. The aim is to vaccinate the target population of around 720,000 people in this age group by 30 June.

Vaccinations at designated sites for those 60 and older will start small. Cloete explained that for the start of the rollout, a small number of persons 60 years and older will be invited by the Western Cape Department of Health to vaccination sites in order to test the systems. They will be vaccinated and receive their appointments for the second dose.

Once things run smoothly at the vaccination sites and any potential issues are sorted out, according to Cloete the province will start scaling up its vaccinations, and those who have registered on the EVDS will start receiving the SMS with the date, time and location of their vaccination appointment. He estimated that this will happen in about two weeks from now.

After phase two A, according to Cloete, the rollout will move to phase two B aimed at a target population of just over 1.6 million people between 40-59 years old. This is expected to start on 1 July and to end on 30 October. He did, however, explain that the two phases may overlap, as the province may invite people from phase two B once demand from phase two A declines.

The aim is to start phase three of the rollout on 1 November, which will focus on those aged between 30-39 years old and those aged 18-29.

Cloete confirmed in Thursday’s digicon that 30,420 Pfizer doses will arrive in the province on 13 May.

According to him, the province needs 533 vaccinators for phase two if they want to reach their goal of just over 26,000 vaccinations per day. By 12 May, 3,083 vaccinators have been trained in the province. He said the province has sufficient minus 70-degree cold storage needed for the Pfizer vaccine and will be able to transport the vaccines at that temperature to rural areas.

During a press conference on 25 April Premier of KwaZulu-Natal (KZN) Sihle Zikalala announced that the province will use an “incremental approach” when dealing with phase two and three of the vaccination rollout. The number of vaccination sites will be increased as the rollout is scaled up.

Several mass vaccination sites have been identified, including the Royal Showgrounds, the Pinetown Civic Centre, and King Zwelithini Sports grounds.

He said from 17 May the province will target essential workers, people who work in settings where they interact with many others, those above 60 years of age, and people over 18 with co-morbidities. The target population for phase two is about 2.9 million people.

Zikalala said they trained 7,616 people to administer vaccinations in the province.

According to an article in IOL, 69,958 HCWs had been vaccinated in the province by 11 May.

According to a statement issued by the MEC of Health in Mpumalanga, Sasekani Manzini, they had vaccinated 18,297 HCWs by 6 May through the Sisonke Programme. Vaccinating the remaining HCWs will run concurrently with phase two set to start on 17 May.

According to the statement, the province will receive 7,020 doses of the first tranche of Pfizer vaccines, which will be administered over the course of five days at six vaccination sites.

The province held a launch event for EVDS registration for persons over 60 on 6 May at Verena Community Hall in the Thembisile Hani local municipality.

According to a media statement by the Eastern Cape Department of Health on 5 May, they had vaccinated 37,157 people by 30 April as part of the Sisonke study.

“With a population of 6.7 million people, the Eastern Cape wants to inoculate 4.5 million in 705 wards across the province,” the statement reads. “This will be done in 1,882 vaccination sites, of which 1,064 will be healthcare facilities, and 818 of these sites will be in schools and community halls and other off-site facilities.

The department will also deploy 3,776 community health workers whose contracts were renewed to help register people during door-to-door visits using their smartphones.

The North West province officially launched registration for phase two of the vaccination rollout on 29 April. North West Department of Health spokesperson Tebogo Lekgethwane told Spotlight the launch was to spread the message on the need for registration and demonstrating the EVDS system.

He added that the province would start phase two on 17 May.

During the EVDS registration launch, medical specialist Prof John Tumbo said in phase two they will focus on vulnerable groups like those above 60 years old, and people in congregate settings like correctional facilities, essential workers, and anyone older than 18 with comorbidities. He added that phase two will target those over 60 years old first and will then focus on essential workers.

Tumbo said they will deploy mobile outreach teams at sites such as Sassa pay points and elsewhere to help register those older than 60.

As of 12 May, 23,061 HCWs in the province had been vaccinated through the Sisonke study, according to Lekgethwane.

According to a statement, by the North West Department of Health, over 40,000 HCWs had registered on the EVDS. North West Health MEC Madoda Sambatha urged the remaining HCWs to go for their vaccination as soon as possible.

Lekgethwane said the province has trained 238 vaccinators with the capacity to vaccinate 9,520 people per day.

“There are plans to register those who do not have access to technology via door-to-door means when they come at Sassa pay points and at Clinics. We are making [a] public announcement that they carry along their ID and addresses when they visit these places,” Lekgethwane said.

When asked about how many Pfizer doses had been allocated to the province, he replied they are awaiting confirmation of the exact number.

In a recent article on Spotlight Free State Department of Health spokesperson, Mondli Mvambi said that the province had registered about 20,000 people over the age of 60 on the EVDS, and is aiming to register about 300,000 people.

“We have 97 vaccine sites in the province that we are preparing for vaccination,” Mvambi said.

According to an update by the Free State Department of Health 20,123 HCWs had been vaccinated through the Sisonke Program by 5 May.

The province has started with information drives to encourage those 60 years and older to register on the EVDS for phase two of the vaccination rollout. The MEC of Health, together with the Limpopo Premier officially launched the EVDS registration campaign two weeks ago, according to Mauvha.

He said that the target population for those over 60 and older is estimated to be about 500,000.

Mauvha could not confirm the exact number of Pfizer doses that were being allocated to the province.

According to an update by the Northern Cape Department of Health posted on social media, 7,570 HCWs had been vaccinated through the Sisonke Program by 10 May. Spotlight hasn’t yet managed to obtain more information about the province’s vaccination plans. – DM/MC