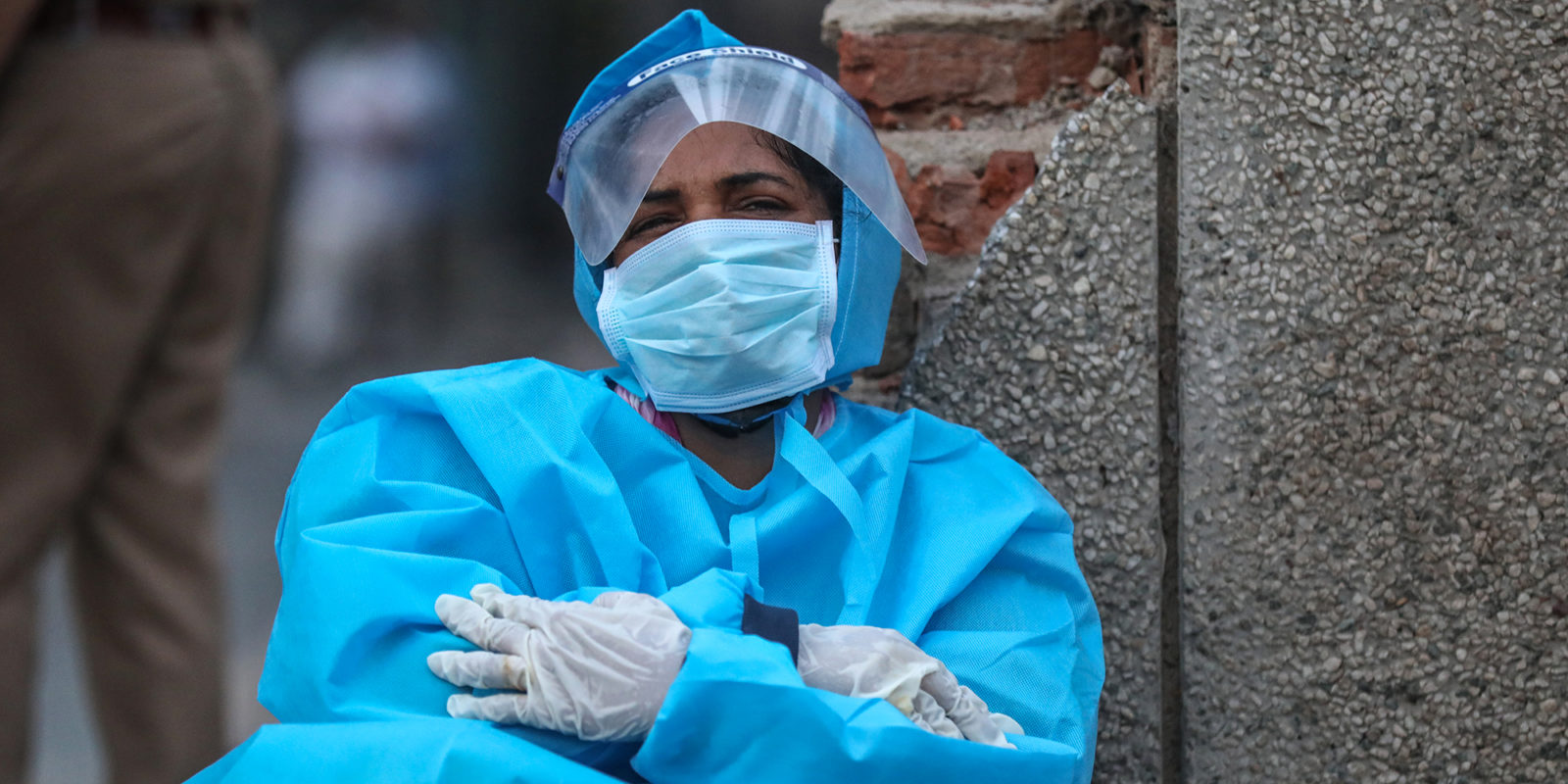 A relative wearing Personal Protective Equipment mourns during the last rites of a Covid-19 victim at a makeshift cremation ground in New Delhi, India, on 8 May 2021. (Photo: EPA-EFE / RAJAT GUPTA)

US deaths from Covid-19 have been undercounted, President Joe Biden’s top medical adviser said, with the nationwide toll approaching 582,000. New cases in the US dropped over the past week to the lowest level since the end of September.

With more than a third of its adult population now fully vaccinated, the UK reported just two virus deaths on Sunday. The European Union hasn’t renewed its order for the AstraZeneca vaccine beyond June.

India’s capital extended its lockdown for another week and adopted stricter controls. The world’s worst-hit nation recorded more than 4,000 coronavirus deaths for a second consecutive day.

Los Angeles will offer appointment-free vaccinations at all sites starting on Monday, Mayor Eric Garcetti said, in an effort to “knock down barriers to vaccine access.” The city is expecting to administer more than a quarter million shots for a second straight week.

President Hassan Rouhani said some 13 million people in Iran, about 15% of the population, will be vaccinated against the coronavirus by July 22, as the country tries to combat the Middle East’s worst outbreak.

Rouhani said he expects all people in high-risk groups to receive at least their first dose by that date, the state-run Islamic Republic News Agency reported, adding that two domestically developed shots will be ready for mass use by June.

More than a third of the United Kingdom’s adult population is now fully vaccinated against Covid-19, and two-thirds of adults have received a first shot. The UK has now administered more than 53 million doses of coronavirus vaccines. The success of the vaccine roll-out, coupled with strict lockdown measures that are now being eased, has led to a plunge in new cases and deaths. Health authorities on Sunday reported just two daily deaths from the virus in all of the UK.

Per capita cases in the US have declined enough to allow a lifting of restrictive ordinances and a resumption of “normal activity”, former Food and Drug Administration head Scott Gottlieb said.

“Certainly outdoors, we shouldn’t be putting limits on gatherings anymore,” Gottlieb said on CBS’s Face the Nation. People should be encouraged to go outside in states that have low prevalence, high vaccination rates and good testing in place, he said.

Even so, he predicted that “we’re going to have to contend with Covid again this winter”, which may mean renewed mask mandates and school closings “in certain settings where we have outbreaks”.

Spaniards broke out in spontaneous celebration at midnight on Saturday, after a national state of emergency that included curfews from 11pm to 6am in most of Spain ended at midnight. In the capital of Madrid alone, the police intervened in more than 450 incidents, the Associated Press reported, as hundreds of people, mostly youth, took to the main plazas and streets in several large cities.

“Freedom doesn’t involve holding booze parties in the street because street drinking is not allowed in the city of Madrid,” Mayor José Luis Martínez-Almeida said on Sunday. Restrictions were eased on restaurants, travel between regions, and on social gatherings.

There’s “no doubt” the US has undercounted its number of deaths from Covid-19, which now stand at over 581,000, President Joe Biden’s top medical adviser said.

But Anthony Fauci, director of the National Institute of Allergy and Infectious Diseases, said on NBC’s Meet the Press that a University of Washington analysis published May 6 that the true toll is probably over 900,000 is “a bit more than I would have thought.”

The US added fewer than 35,000 cases on Saturday, sending the seven-day rolling average of new infections to the lowest since the end of September. While reporting often lags on weekends, the data collected by Johns Hopkins University and Bloomberg is the latest sign that the pandemic in the US is easing.

Another 625 people nationwide died of Covid-19, bringing the toll to more than 581,000 since the outbreak began. Detroit and New York City had the most deaths per capita among major metro areas in the week through Wednesday, according to a Centers for Disease Control and Prevention report dated May 6.

“We haven’t renewed the order after June,” he said. “We’ll see what happens.”

The bloc started legal proceedings against the company over shortfalls last month. Breton also said the region is pushing for the establishment of vaccine factories in Africa, which is just as important as the question of intellectual property protections covering the technology.

“There needs to be working factories in Africa like in Senegal, where there is the Institut Pasteur, and South Africa,” he said. “Patents, okay, but there needs to be industrial infrastructure at the same time.”

Madagascar is scheduled to roll out its inoculation campaign on Monday after receiving a first batch of 250,000 doses of the Covishield vaccine through the Covax initiative. The Indian Ocean island nation, with a population of about 27.5 million, has recorded 38,874 confirmed cases and 716 deaths since the start of the pandemic.

Poland registered 3,852 new coronavirus cases in a slowdown from last Sunday. Almost 3.8 million Poles in the nation of 38 million have now received two doses of vaccine or the single-dose Johnson & Johnson shot, with all adults entitled to register for inoculation.

India reported more than 4,000 Covid-19 deaths for a second day, as the nation battled the world’s worst outbreak of the virus. The country on Sunday recorded 4,092 fatalities and found 403,736 new cases, with the capital New Delhi, and other big cities continuing to report surging infections.

The lockdown in India’s capital will be extended until May 17, New Delhi Chief Minister Arvind Kejriwal said in an online briefing.

The restrictions had been set to end on Monday after being extended several times already.

The outbreak in Russia is stabilising, with 8,419 new cases and 334 fatalities on Sunday. Before the Moscow parade held for Victory Day, the anniversary of the defeat of Nazi Germany in World War Two, Health Minister Mikhail Murashko said that planned vaccination efforts should provide collective immunity in the country by September, Interfax reports.

Germany had 2,630 new cases on Sunday, extending a decline in infections that started last month. The seven-day incidence rate fell below 120 for the first time since early April. The country is pushing ahead with first steps for a gradual easing of restrictions.

Singapore will test thousands of people for Covid-19 as infections that couldn’t be traced back to known clusters continued to pop up.

Testing will be expanded to all workers at two Changi Airport terminals and a connected shopping mall after three employees tested positive in recent days, the health ministry said. At a junior college where a student also tested positive, about 2,200 people will undergo swab tests by Monday, while just over 100 close contacts will be quarantined.

Singapore tightened social-distancing measures on Saturday after finding 10 new unlinked cases in the community in each of the past two weeks.

Thailand’s death toll neared 400 on Sunday, with 17 more people succumbing to the disease in the past 24 hours. Most of the country’s Covid-19 deaths have occurred since early April, when a third wave of infections hit. Total cases in the Southeast Asian nation have jumped to about 83,400 from fewer than 7,000 at the end of 2020, government data show.

Restrictions on gatherings are being extended for another week in the Sydney area after Australian health officials said they were unable to identify how a man in the community caught Covid-19.

The measures, which include limits on home gatherings to 20 people and a ban on singing and dancing in indoor venues except for weddings, will run through May 17. Masks will be required on public transport and at theatres, hospitals and nursing homes, although shoppers will no longer be required to wear them at stores, the state government said.

European Union leaders urged US President Joe Biden to lift restrictions on exports of Covid-19 vaccines to address the needs of developing countries before embarking on complex discussions about patent waivers.

At a summit in Porto, Portugal on Friday and Saturday shortly after the US suggested suspending intellectual property rights to boost the supply of Covid shots, German’s Angela Merkel, France’s Emmanuel Macron and Italy’s Mario Draghi appealed to the US to follow the EU example and start shipping significant numbers of vaccines.

“I hope that now that large parts of the American society have been vaccinated we will come to a free exchange of components and opening of the market for vaccines,” Merkel told reporters after the meeting. DM