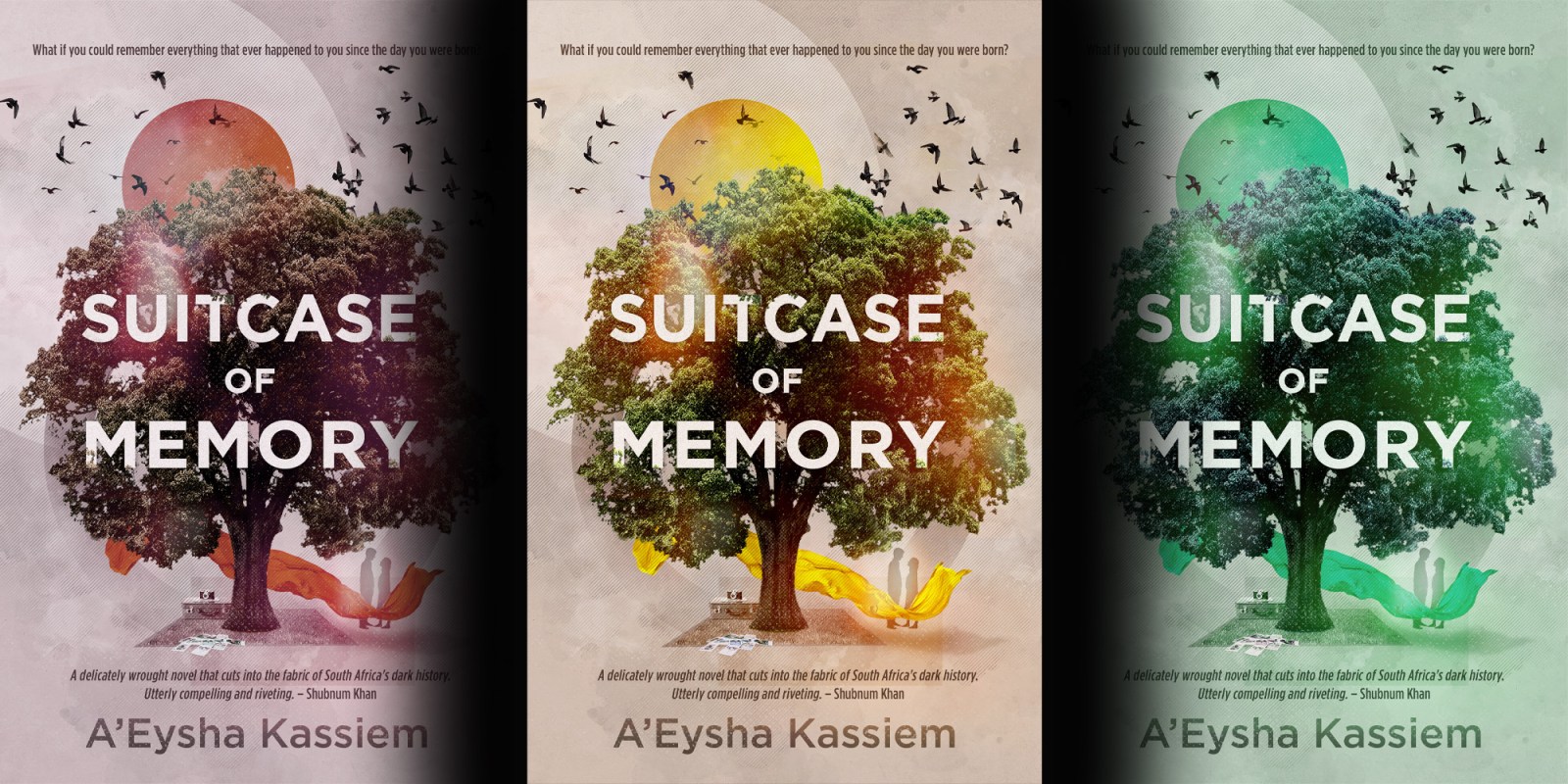 Bastian Bredenkamp is dead. And from behind the grave, he is finally ready to tell his story. Bastian suffers from a rare condition that allows him to remember everything that has ever happened to him since the day he was born. Although he was adopted by influential white parents and passed off as their own, Bastian knows Mama Sanri’s secret. When he falls in love with his housekeeper’s daughter, Rashieda, Bastian decides to do something that sparks a media frenzy: he approaches the Race Classification Appeals Board to insist that he be reclassified from white to coloured. ‘Suitcase of Memory’ is published by Kwela Books.

Suitcase of Memory is A’Eysha Kassiem’s debut novel and is published by Kwela Books. She is a South African journalist and editor, whose career spans almost two decades. She has been News Editor at the Cape Times and News24 as well as Editor of Fin24 and PrintWeek in Dubai. She is a fellow of the German-based International Journalists’ Programme and the US State Department’s International Leadership Programme.

Someone’s coming. Wait, let me listen. I can always tell by the footsteps. Step. Step. Stop. Step. Step. Stop. Yes, I know it well. Can you see if they brought any palm tree leaves? Maybe a jug of water? The earth’s embrace can sometimes be no different to a lover’s – skin tight and unyielding. Here they come with their graveyard flowers and their garden shears. Snip, snip at the dead things, discard the decay. Now for a quick kiss on top of my wooden tombstone and a prolonged glance over my name.

Is everything still in place? Is my name still there? Do they remember?

Perhaps I have already said too much, told stories of things long gone, things that too few or too many will remember. But what is life, or death, without a little regret?

The man who would one day seal my fate was Judge Johannes J Willemse. J for justice. For juggernaut. For jugular. He was a man I saw only twice in my life and, thankfully, not at all since my death. The first was when he came to our house to have dinner with Mamma Sanri and Pa Bastian. That was of course BC – Before Carintjie. Judge Johannes Willemse was a small man who often wore oversized coats with the hope that it would make him appear larger. Instead, dwarfed by his clothes, he was little more than a suit with a smile. His unassuming presence often meant witnesses on the stand forgot that he was even in the room. But, like me, he was a man who missed nothing. Except, well, there is always one thing, isn’t there? I know now that, night after night, Judge Willemse would lie alone in his old mahogany bed, his three silk pillows propped just so in the almost-dark, and he’d stare at the black-and-white photograph beside his bed. Then he’d twitch his eyebrows, run his hands over his bald head, grit his teeth and tap at his fingernails one by one.

The words would twist and turn in his mind as he forced them every which way to get a better look. Perhaps if he could spin them just a little, he might see the answers. But try as he might, there was seemingly no end to the eternal hardship of man versus mind. She’s a silly little girl, he told himself. And then, with a slight smile: Just a sweet and silly little girl. But this sweet and silly little girl, whom Judge Willemse called Joey – short for Johanna – was perhaps better described as sweet-and-sour. Week after week, she climbed the steps to the courtroom entrance. Step. Step. Stop. Step. Step. Stop.

“Free South Africa!” and “Judge Willemse kills!” she would shout.

Funny how she called him Judge Willemse now, and yet he still left the latch off the front door of his Constantia house just in case she ever found her way back home. There were so many mornings when he used to listen to her sing outside his bedroom window when, as a child, she would run out to collect the morning post, before waving at him wildly.

Kisses from a daughter – the closest thing to an untarnished love, with the power to bring a man to his knees and raise him up all at once. Now, he only ever heard her voice – defying both law and lineage – through a loudspeaker just outside his courtroom window. At the time, Judge Willemse was presiding over the case of The State and Dawid van der Merwe vs Timothy Bubbles Booysen. The former was a farm owner, the latter an apple picker who had allegedly stolen eight-and-a-half apples from Van der Merwe’s orchard. Van der Merwe demanded his eight-and-a-half apples back in full as well as the return of two papsakke in wages.

“Bubbles says it never happened, but you know these hotnots, boet…” I overheard Judge Willemse tell Pa Bastian over a rump steak one day as he pulled at the collar of his coat to keep the edges away from his ears. We all knew Timothy Booysen from when he had been a farm worker at Goedleven. He was generally well-liked by both farm workers and farm owners. He was seldom late, never left until the job was done and was literate enough to follow instructions on a bag of manure. It was Timothy who had taught me the word “fertiliser”. It was one of the reasons that I ended up being even more confused in my biology class that year.

“The male sperm then fertilises the female egg to eventually form an embryo.”

I read the line about a hundred times trying to picture what that meant. Eventually, Timothy told me, “Dit bedoel nie net kak nie” – It doesn’t just mean shit – and figured that was explanation enough. DM