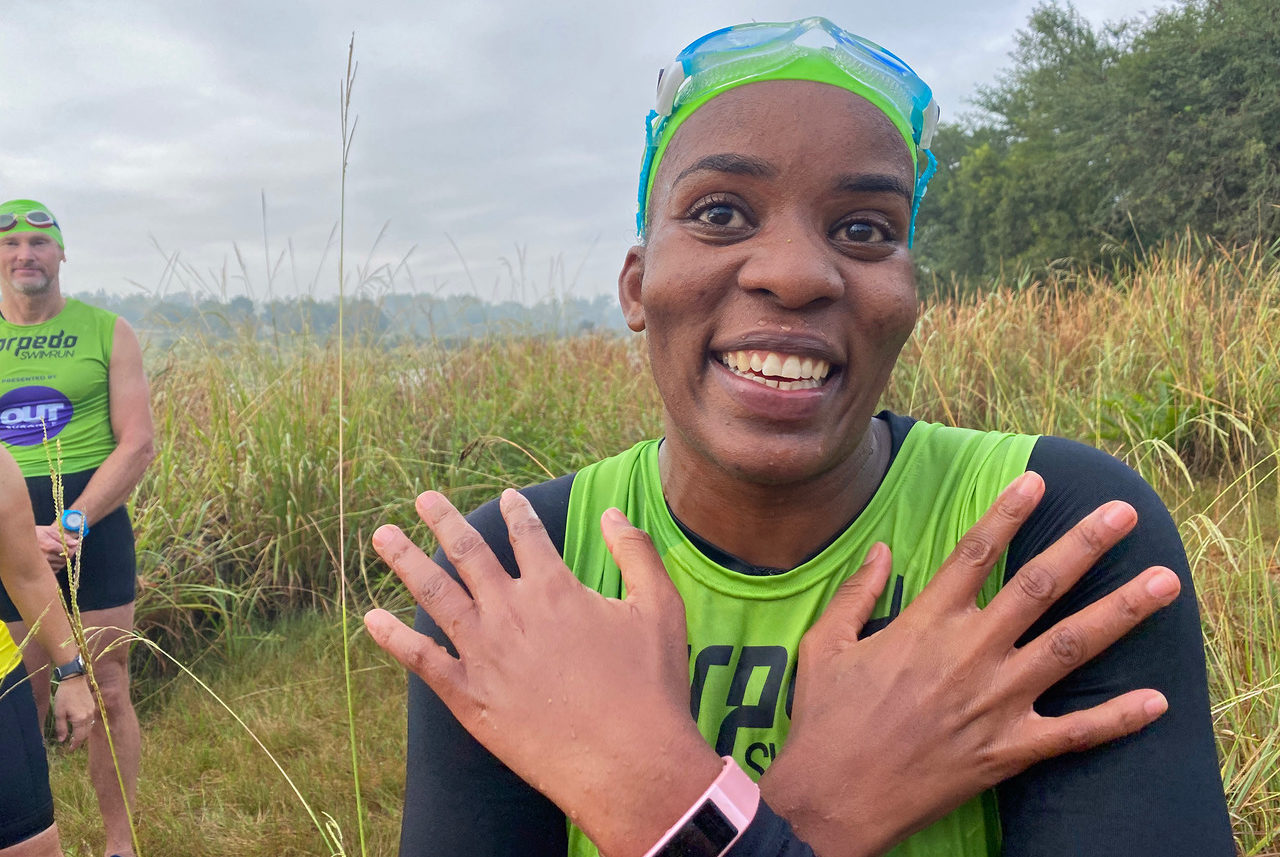 Many people have been inspired by Witbank mother of three Thina Mananyetso’s courage at taking on and conquering the daunting Outsurance Torpedo SwimRun Moon.

The challenging “swimrun” race at Cradle Moon Lakeside Reserve near Muldersdrift is made up of four swims (3.1km of open water swimming in total) and four runs (a total 11.9km of trail running).

The remarkable thing about Thina Mananyetso’s achievement in completing this event was that she only started learning to swim two years ago.

Mananyetso was born a twin in 1982 but her twin brother died just days after birth and she never really understood what had happened to him. She says she often finds herself wondering what her twin would have done in a particular situation, and thinks her curious nature stems from this unknown in her life: “I’m just curious. I say to myself, ‘Let’s see what will happen if I do it’.”

Her name, Thinavhuyo, means “no destiny” in Venda. She never got a clear explanation from her parents as to why they called her this but feels her name has helped to shape her character.

Mananyetso struggled at school and failed Standard 7 and matric the first time. “That broke me, it took me a long time to heal from that, but I think it also made me determined to succeed,” she says.

Today she runs her own accounting business and has established a non-profit organisation that helps women, young and old, to conquer one “impossible” challenge after another.

In 2017, Mananyetso decided she was going to participate in the Comrades Marathon, although she had never run more than 21kms before. In November 2017, she missed a qualifying time at the Soweto Marathon but ran another marathon in January and qualified. She completed the Comrades in 10 hours and 56 minutes and was inspired to start helping other young runners. She started her NPO, Exceptional Foundation, which helps girls who show promise in running to develop their skills.

She also started a vegetable garden scheme with a group of gogos, who now earn an income from the sweet potatoes they grow.

Two years later, Mananyetso decided swimming would be her next challenge. She took lessons and, as she progressed, started to investigate open water swimming. She took part in the Sun City 600m fun swim, explaining her drive and motivation by saying, “My mindset is strong. Fitness is here,” pointing to her head.

In a prophetic diary entry on 26 August 2019, Mananyetso wrote: “Can swimming be something that really inspires people about my life? Maybe people learn something… I have fallen in love with swimming, I have fought a battle. I made it happen… I fought my fears. More effort I am dreaming of a race… I want to be awesome, I want to be outstanding. I want to prove that nothing is impossible. I wanna encourage women. I wanna speak of consistency no matter what.”

One year later, in 2020, she explains, “My husband suggested I enter Mrs Mpumalanga. I went for public speaking lessons; I learnt to walk. I became a finalist. Each finalist had to organise an event for 30 women and I had 90 women pay to attend! I sourced speakers and spread the word about my theme ‘They Don’t See the Ashes”. We women carry so much that nobody sees and I found so many women wanting to tell their stories. I was very sad not to win in November; I worked very hard and I don’t like not to succeed…”

At first, Mananyetso was intimidated by the open water swims and struggled to complete the first swim. But McMartin saw her determination to do the event coming up in April and contacted Ryan Stramrood, an extreme swimmer and inspirational speaker who holds the record for the highest number of Robben Island crossings. He recently broke the record for the 33km swim across False Bay, which he completed in eight hours and thirty nine seconds, and has achieved such feats as swimming a mile in sub-zero temperatures in Antarctica.

Stramrood had completed three Torpedo SwimRuns in the Cape and readily agreed to do the event alongside Mananyetso to give her the confidence needed to complete the course.

“When I checked out who Ryan was, I screamed and called my husband. I could not believe he was going to help me. There was this thing in me that did not want Ryan to have to hold me in the water. I knew I was going to meet a legend and I had to be ready and do it myself. I needed to be ready and I started swimming every morning. Sometimes we just need something in life to wake us up, and Torpedo came along.”

Meeting Stramrood before the event, she talked through some of her fears about open water. “Mental fitness is key, you need to be positive, and talking to Ryan really helped me to be ready.

“It killed me when I didn’t finish the tour, but here was this opportunity to make it happen.”

Ryan says: “I spend much of my life inspiring audiences around the world, challenging them to set goals they do not know they can achieve, and here was Thina who had never swum a metre before 2019, gripping my hand tightly as we headed down a slippery embankment. I very rarely see grit and determination quite like I saw when she put her head down, not looking up again until we reached the other side. It was a privilege to be a part of her journey.”

Mananyetso is elated: “I was determined to finish. I wanted to finish what I had started because there is reward in finishing. It’s not only about a medal or podium but about the fulfilment of finishing. Torpedo SwimRun served as a vessel to unlock other gifts I didn’t know about.”

On the roots of her success, focus and commitment, Mananyetso points to practice and patience: “I am patient with myself, I give myself time. I also do research, I study it and I do it again and again.” DM/ML